In my world geography class we often talk about current events. In my 9:00 class this morning we talked about floods in Venice, droughts in Southern Africa, using toxic plastic trash as fuel to make tofu in Indonesia, uprisings in Bolivia (first indigenous president out of power), Chile (increased subway fares), Iran (increased gas prices) and Iraq (end corruption and stop Iran's meddling), and about the unwise reversal in US policy that now states that Israeli settlements in occupied territories are not a violation of the 4th Geneva convention. We then turned to LDS Church President Russell M. Nelson's recent trip to Southeast Asia.

I started out my current event temple talk by showing three of my photos from Cambodia. 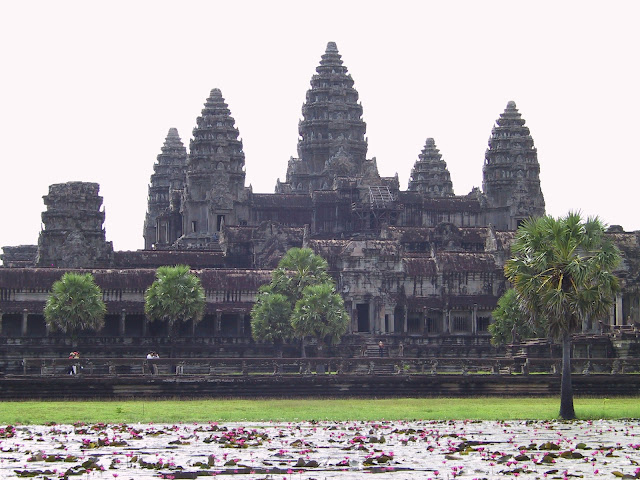 First I asked where and what is this. Answers included Thailand and Cambodia (correct) and then someone knew Angkor Wat. When asked what religion is represented the first guess was Buddhism followed by the correct Hinduism. I then explained that the center tower is symbolic of Mt Meru where the Gods of Hinduism dwell and that this abode of the gods is then surrounded by four lower mountain peaks and mountain ranges and then a moat. 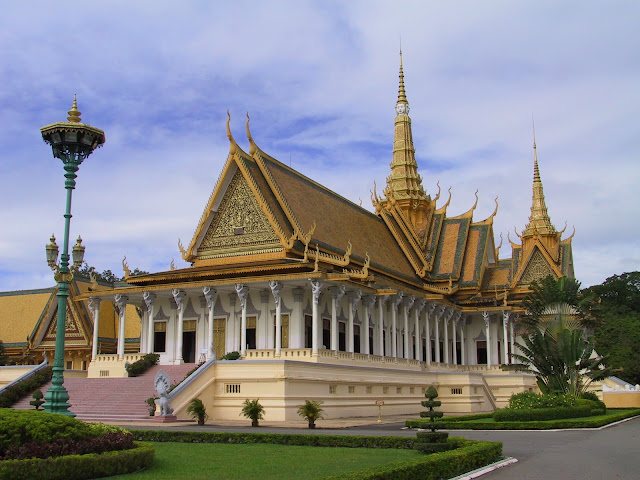 I then showed this photo of the Silver Pagoda which is a Buddhist Temple in the royal complex in Phnom Penh. 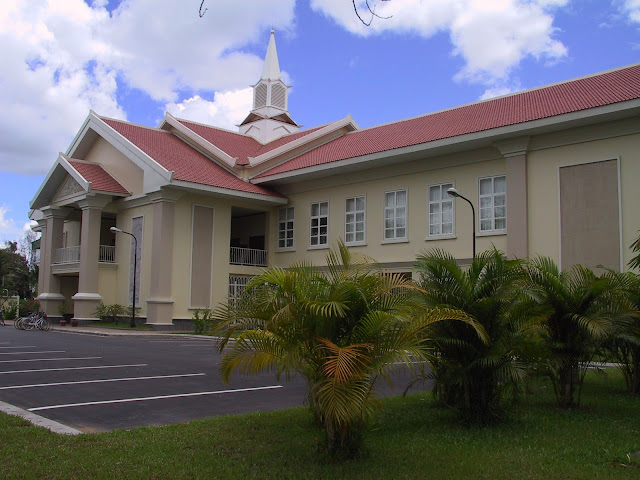 Then I asked what this building was. No none knew. I explained that it is one of two stake centers in Phnom Penh. I also told of a visit I once had with President John Colton who was the mission president when this chapel (the first built in Cambodia) was approved and constructed. He told me how it was his hope to make the building fit in with and be a part of the Cambodian landscape. To do so architects were directed to use Cambodian motifs (mainly the roof lines) in their design. He lamented that not everyone liked the idea. I for one do.

By now some students were catching on to where this was all leading. One raised his hand and when called on described how the architects' drawing of the new Phnom Penh Temple looked very Cambodian. Bingo. He took the bait and ran with it. The temple was announced in conference two years ago and while President Nelson was meeting with Saints in Cambodia he unveiled a rendering of what the temple would look like and where it would be built. I then showed this photo. It does look Cambodian. 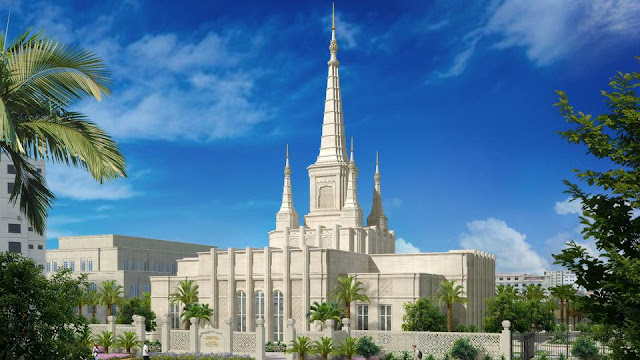 It was a fun moment for me, as I flipped back and forth between these three photos, to see the minds of the students start to connect the looks of this temple with the layout and designs of the central spire and four smaller spires of Angkor Wat and the designs on the Silver Pagoda. I think the general consensus was that it looked Cambodian. I asked the students if there were other temples that were built to fit the local landscape and culture. One student remembered me mentioning the Hartford Connecticut Temple that looks like a New England Congregational Church 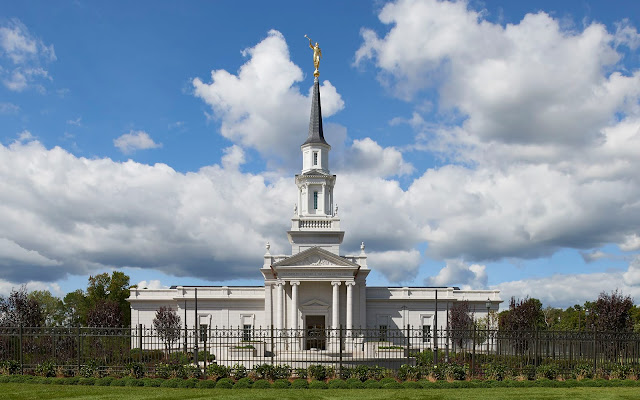 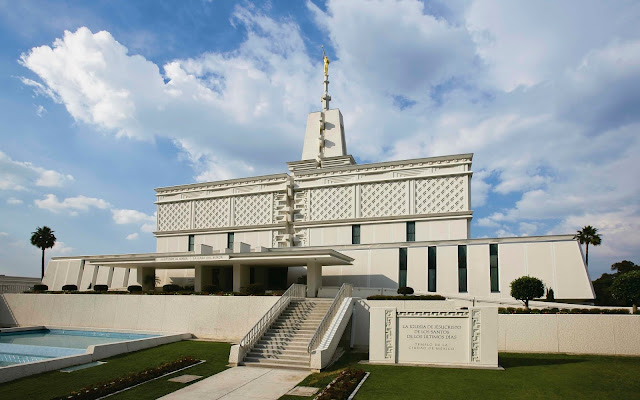 Another mentioned the Aztec motifs of the Mexico City Temple 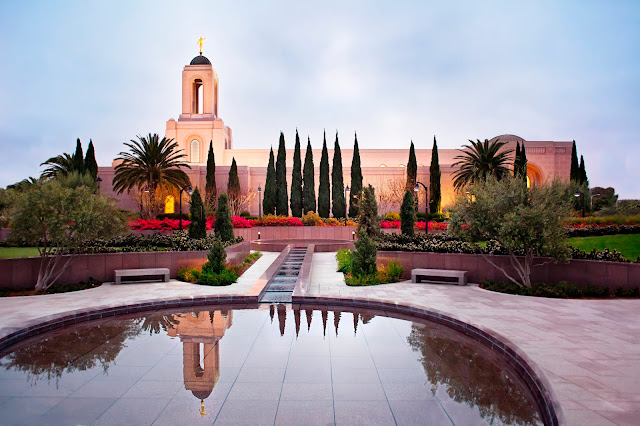 I then switched my Temple Talk to Indonesia and showed this photo of last night's devotional with President Nelson--attended by 1,800 members and watched by another 300 in chapels throughout the country. 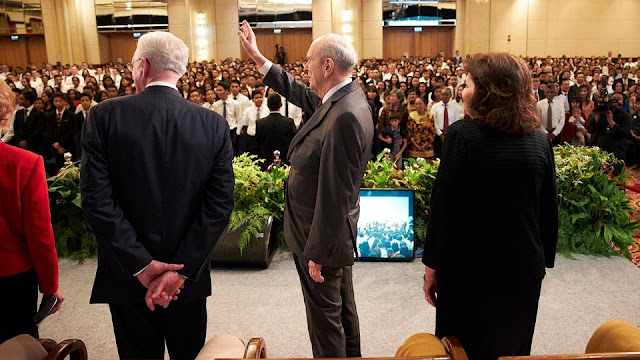 I explained how for the last few years there have been high hopes in Indonesia that one of these General Conferences a temple for Indonesia would be announced. Some (including me) even dared hope out loud that President Nelson, who likes to mix things up and to spring surprises, would use his visit to Jakarta to make such an announcement. Yesterday as my Facebook feed started to light up with happy posts from members at the devotional, I knew immediately that a temple had not been announced, otherwise my Facebook feed would have exclaimed the news.

I then referred to this morning's Deseret News article about the visit (based on the the above noted Newsroom article) and about how a temple was not announced.

He started by noting that "some have wondered when Indonesia would have its own temple" Then, "after a long pause that got everyone on the edge of their seats, he said: 'I don't know!' and everyone just laughed." President Nelson then stated: "YOU determine when that happens....It takes a long time to build a temple, but longer to build a people READY for the temple."

Because we had talked about the temple in Cambodia I shared the following statistics for comparison:

I then explained that while Cambodia has more members, Indonesia has multiple generations of committed members.

I then asked the students what factors (besides revelation) might help to explain why a temple is being built in Cambodia, but not Indonesia. One student wondered if it was because Cambodia was a more compact country and thus members would have easier access to a temple. Another student explained that certainly one country being mostly Buddhist and one being mostly Muslim would be a factor. Both good answers.

I then added my thoughts. First I noted that the Church entered Cambodia just a few years after the horrific and chaotic decades of the killing fields of the Khmer Rouge and then the occupation by Vietnam. Those years certainly prepared many people to receive messages of love, peace and eternal salvation. They also probably led to the disillusionment of many who were troubled by the carnage wrought by fellow Buddhists. 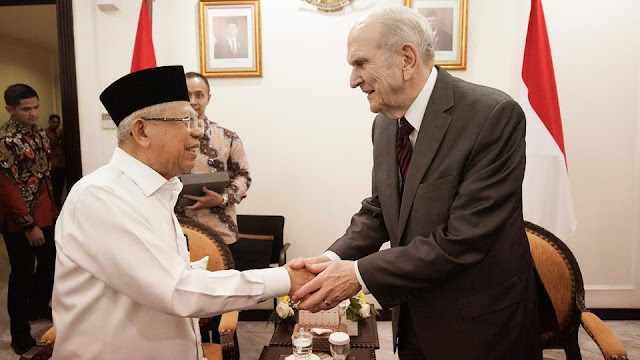 Someone asked if there were any temples in Muslim majority countries and when I said no, he then noted that building one in Indonesia may raise concerns or even lead to opposition to the Church there and in other Muslim lands. I agreed with what he said for that had been my thinking too. I then explained that even now it is very difficult to get permission to build Christian churches in Indonesia--even though there is freedom of religion. To get a building permit requires signatures of approval from 60 residents of the neighborhood where the church will be built. Most neighborhoods are Muslim majority so it is hard to get such approvals. As such, two ward houses in the Jakarta suburbs of Bekasi and Tanggerang are located (hidden away with no steeples or signs) in shop/house structures in shopping malls.

I then summarized by explaining that there certainly are local factors to be considered when deciding where and when temples should be built.

I agree with President Nelson and Sister Tandiman that members certainly need to be ready for a temple. I also think that given the distance and cost of travel from Indonesia to temples in Manila and Hong Kong, given the steady and deep faithfulness of so many Saints in Indonesia who are ready for a temple, and given the slow rate of growth for the Church in a Muslim majority country, at some point hopefully sooner than later Indonesia should get a temple--even though it may never meet the threshold of statistical requirements.

Temple Talk will continue in my geography class next Monday when we discuss the geography of China. After lecturing about the the history of Hong Kong--Opium Wars, British control, and then the return of Hong Kong to China in 1997, I like to show these two photos. 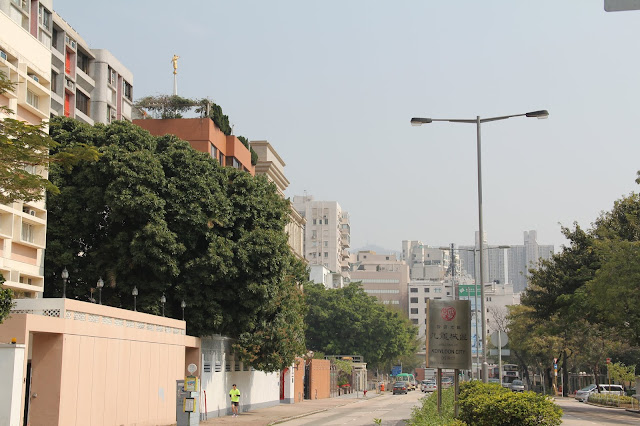 I first show this photo and ask if they notice anything unusual or familiar. They usually pick out the angel Moroni. 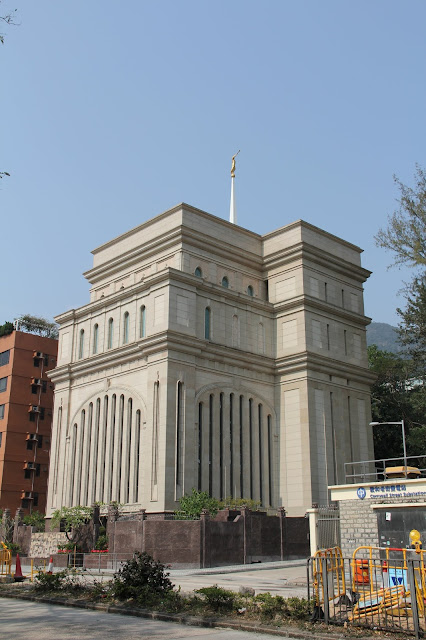 I then show this photo of the Hong Kong Temple and tell the story of teaching my world geography class at BYU in 1992 when President Hinckely made a surprising announcement that a temple would be built in Hong Kong. As we were talking about the return of Hong Kong to China in class, one of my students raised her hand and innocently asked: "Do you think President Hinckley knows about the return in five years?" I smiled and said "Yes." It was an ah ha moment for her. I think that day she realized that prophets know what is going on in the world (and, like I require in my classes, they also read a daily international newspaper). We then talked about how Hong Kong may not have had all of the members normally required to build a temple, but President Hinckley certainly understood that there was a narrow window of time remaining to get British permission (easy) to build. He knew that once China took over permission may never come. The unique multi-story, urban design of the temple came to President Hinckley on a visit to Hong Kong in 1991. The temple was completed one year before the return of Hong Kong to China.

Without (or perhaps with) the Angel Moroni, someday a similar structure might easily slip into Jakarta's growing urban jungle.