Rewriting rewritten history: some thoughts on monuments and flags 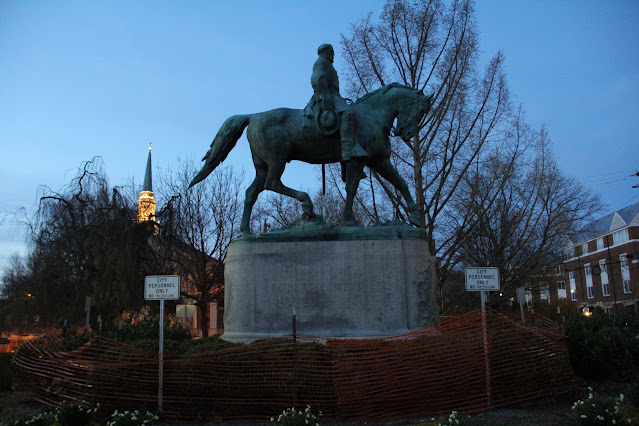 The Robert E. Lee Memorial in Charlottesville, Virginia (April 2019)
I am not a southerner. I am a geographer who likes to read the landscape. Two years ago I ventured forth in New Orleans, Louisiana and Greenville, Mississippi to see what I could see. Here are images and text (plus some additions) from my blog post from April 2018 https://beitemmett.blogspot.com/2018/04/new-orleans-mississippi-and-memphis.html. New Orleans had recently removed four prominent Confederate memorials so the topic was already a national issue. At the annual meeting of the American Association of Geographers I attended two sessions with very interesting papers on the confederate memorial debate and the plenary session on racism in New Orleans. I start with some images from those presentations. 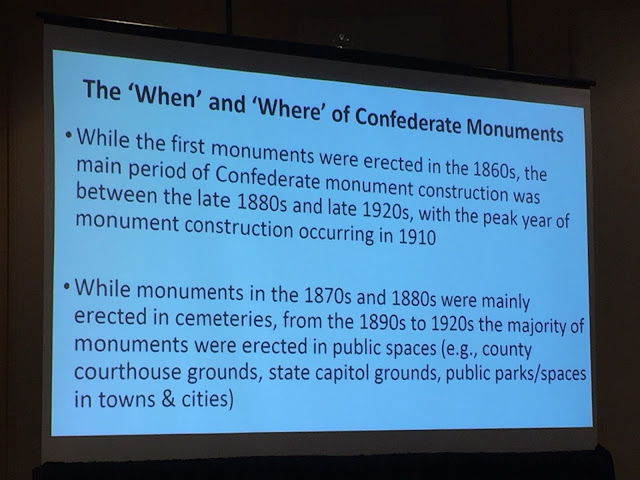 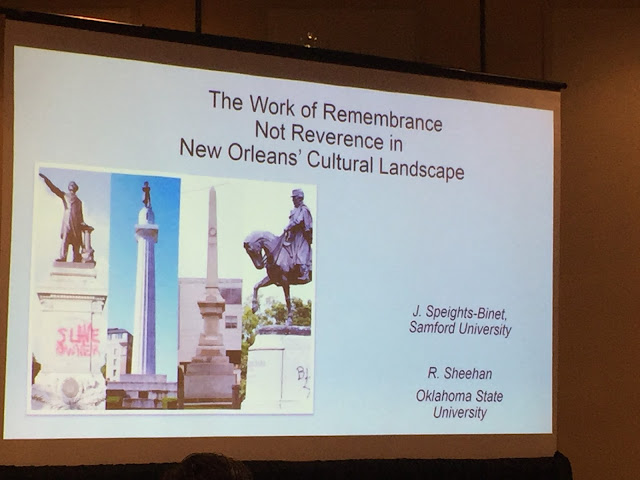 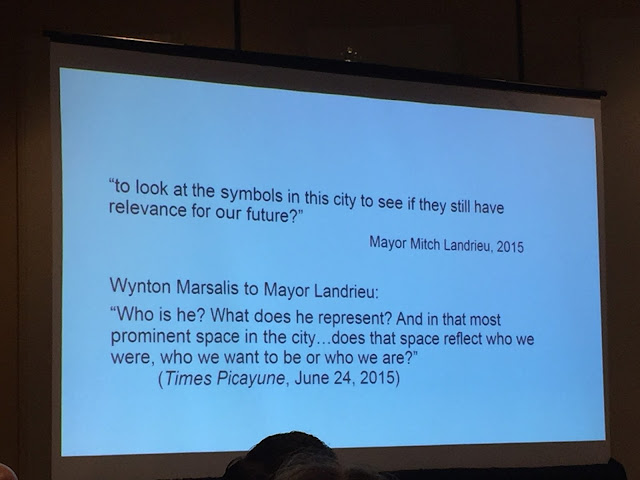 Quotes referring to the taking down of four confederate monuments in New Orleans last year. 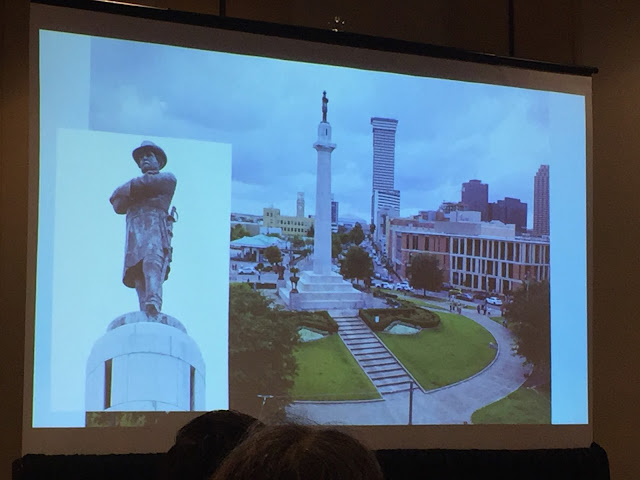 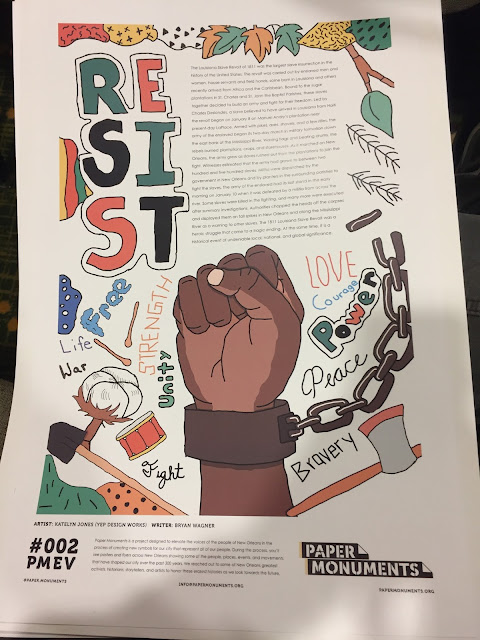 One paper looked at ways blacks in New Orleans are trying to memorialize (via paper monuments) influential Blacks from the city. The underlying point was why have Blacks not been memorialized in the city. 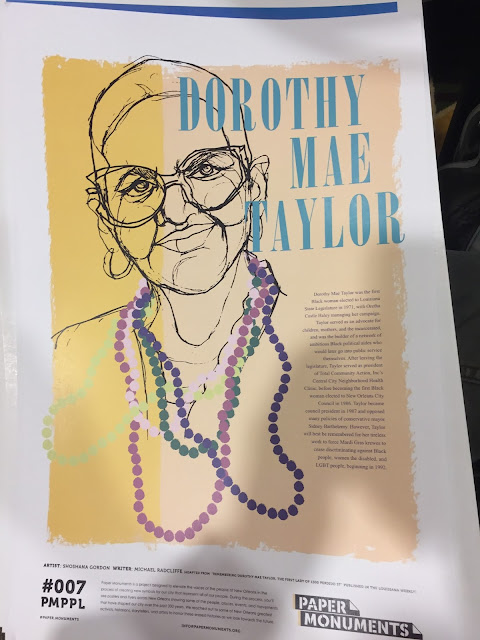 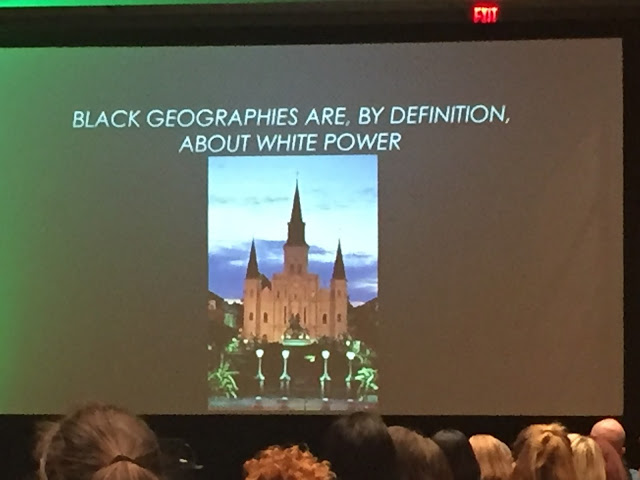 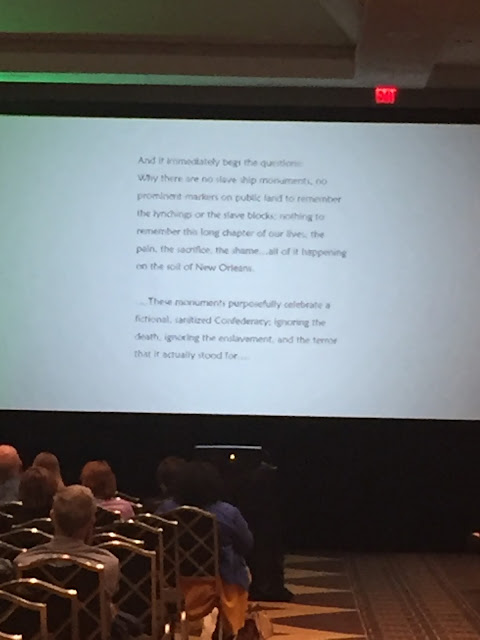 "And it immediately begs the questions: Why there are no slave ship monuments, no prominent markers on public land to remember the lynchings or the slave blocks, nothing to remember this long chapter of our lives, the pain, the sacrifice, the shame....all of it happening on the soil of New Orleans.

...These monuments purposefully celebrate a fictional, sanitized Confederacy. Ignoring the death, ignoring the enslavement and the terror that it actually stood for..." 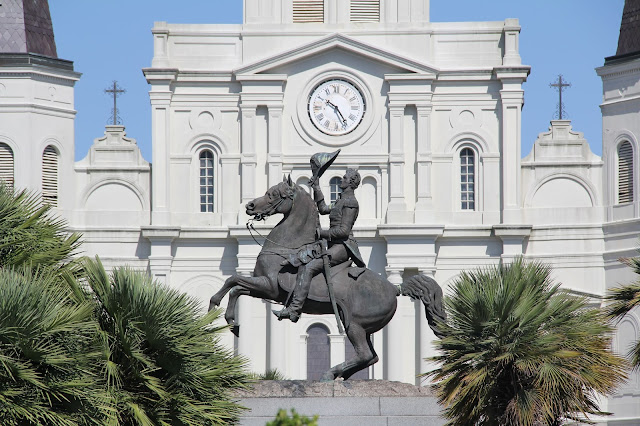 For the past three years at BYU I have been team teaching a course on nationalism. Each semester new issues involving nationalism were discussed (populist nationalism, Trumpism, Brexit, ethnic nationalism etc.). One of the topics from last semester's class was the whole Confederate monument debate. I therefore set out to see what I could see about monuments in New Orleans (and later Mississippi). Andrew Jackson (above) still stands in Jackson Square in the French Quarter. 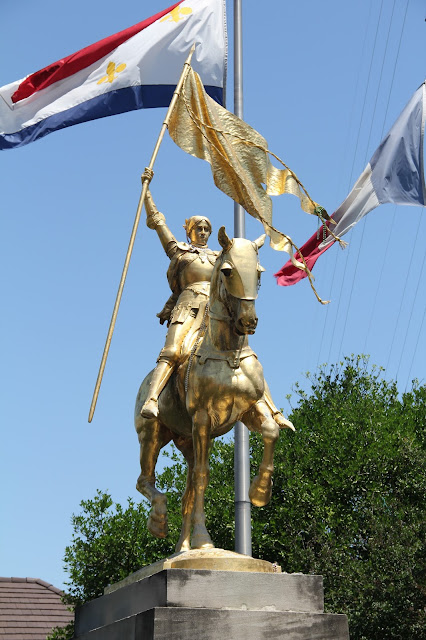 Joan or Arc still stands in front of the French Market 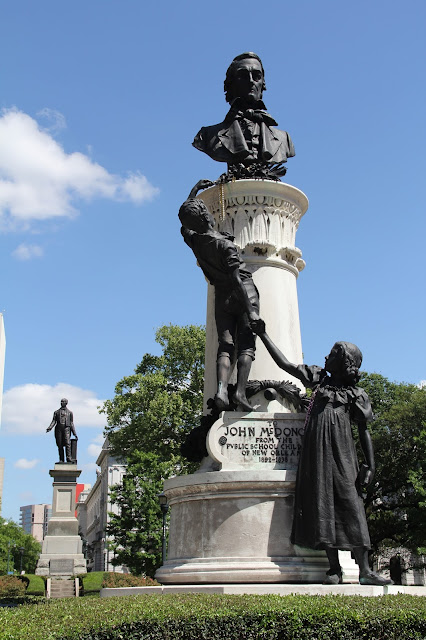 In Lafayette Square there is no statue of Lafayette, but there are statues honoring John McDonogh (a local educator) (front), Henry Clay (left) and Ben Franklin. 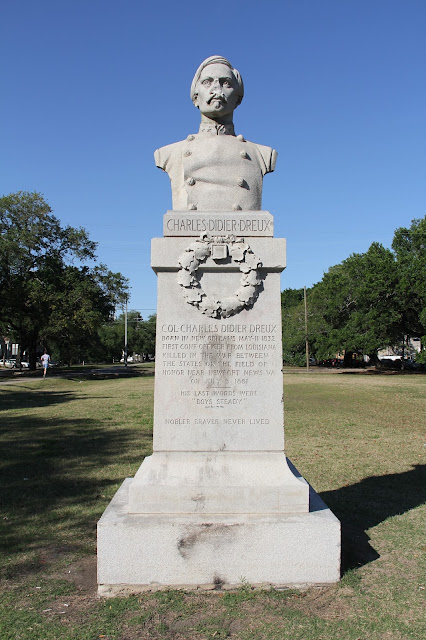 Also still standing is the first causality from Louisiana in the Civil War. A fitting tribute to a local boy, Charles Didier Druex, who was doing his duty. 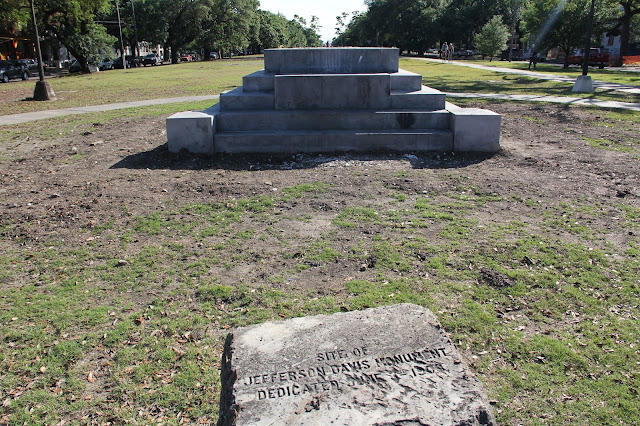 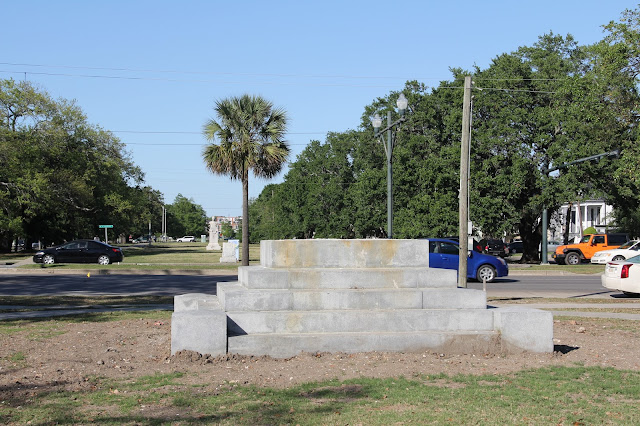 No longer standing is the statue of Jefferson Davis, President of the confederacy. All that remains is the pedestal. This is located just across Canal Street from the Dreux statue shown above. 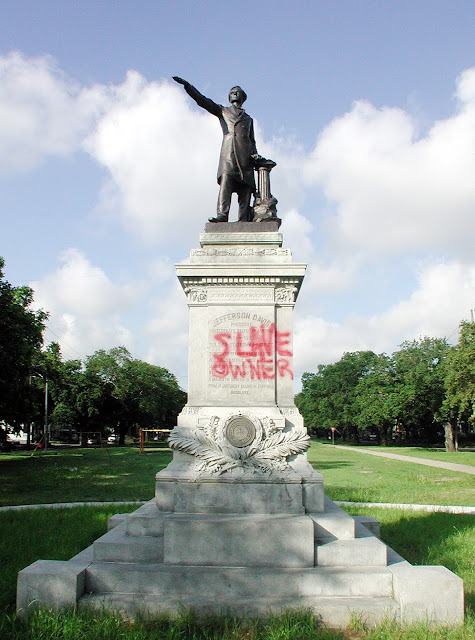 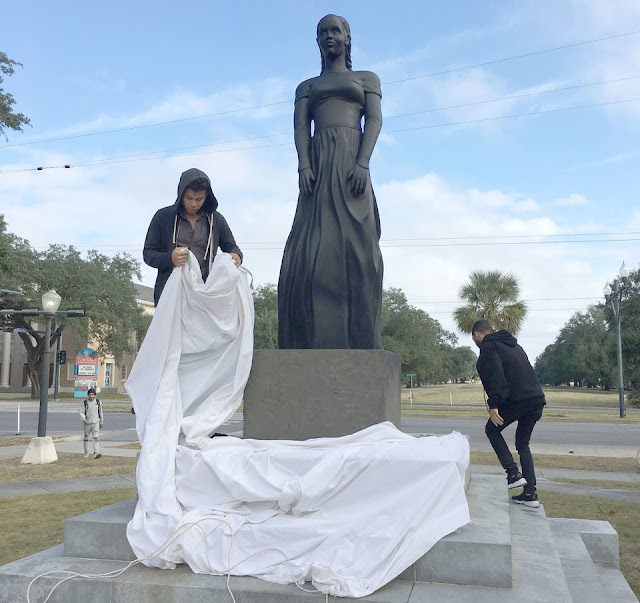 Last fall a statue of a Black woman was temporarily placed on the pedestal of Jefferson Davis. I learned about this statue in one of the sessions. I didn't know how temporary the placement was (it was only to make a music video) so I ventured out to find the woman only to find out the pedestal empty once again. 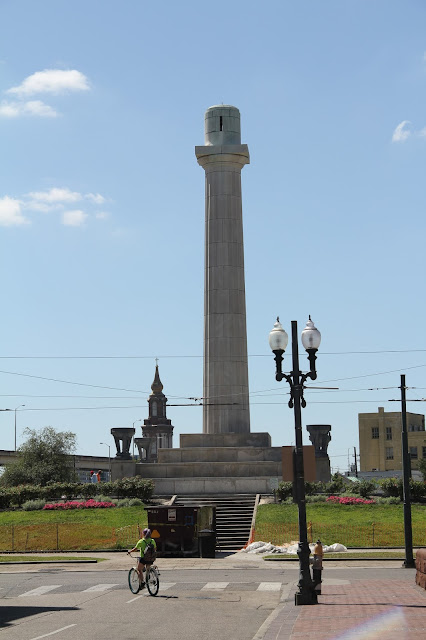 The next day I sought out the empty pedestal where Robert E Lee (who never set foot in New Orleans) once stood. 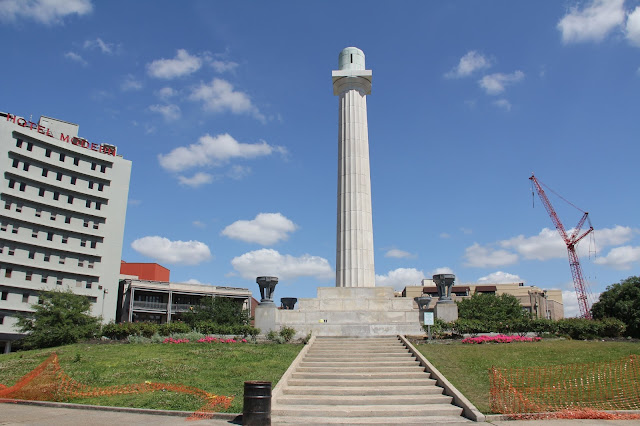 I am all for confederate monuments at burial sites in cemeteries or at battlefields where soldiers died, but I am not a big fan of monuments erected during the Jim Crow era or the civil rights era as an intentional act of white supremacy. One local I talked to wanted to keep the four removed monuments in New Orleans because of the art and history associated with the monuments. However to keep the peace she suggested that the monuments could maybe be relocated to less central locations perhaps along the lines of a cemetery of Confederate memorials. I think Russia has similar collections of removed statues of Stalin and Lenin. 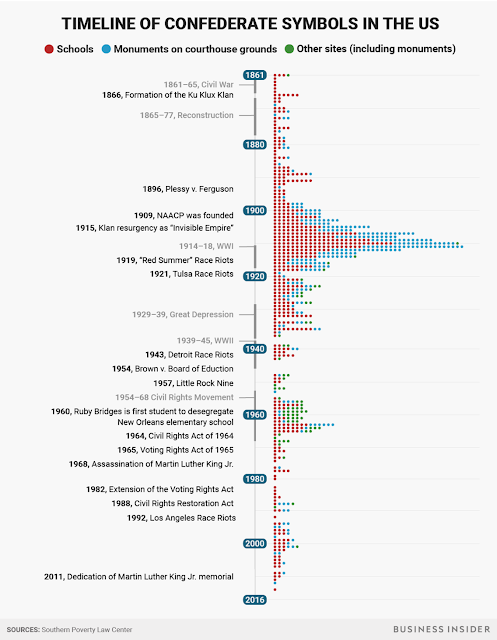 The Jefferson Davis monument was dedicated in 1911, the Lee monument in 1884. Research by the Southern Poverty Law Center shows a timeline of when all of the  Confederate monuments were erected. Most were around the turn of the century during the height of the Jim Crow era which suggests that there were racist motives involved and not just a desire to honor Civil War soldiers. 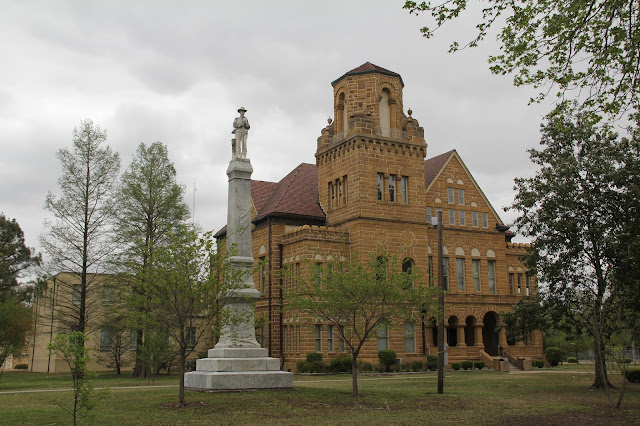 Confederate Monument at the Greenville Mississippi Court House. I knew there was a monument (thanks google for helping me find a list of monuments in Mississippi) in front of the county courthouse (no thanks goggle maps for not showing the courthouse) but it took some driving around town to finally find it. 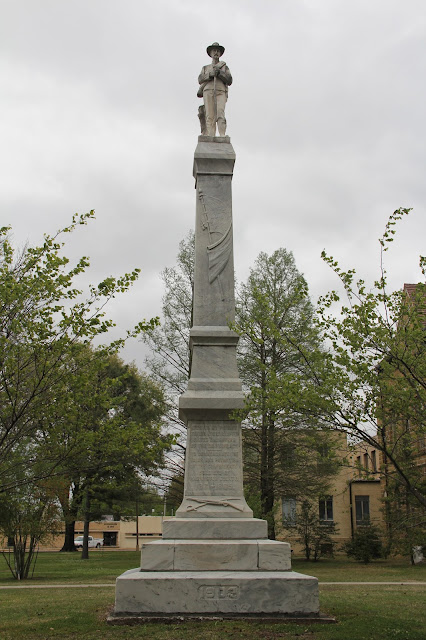 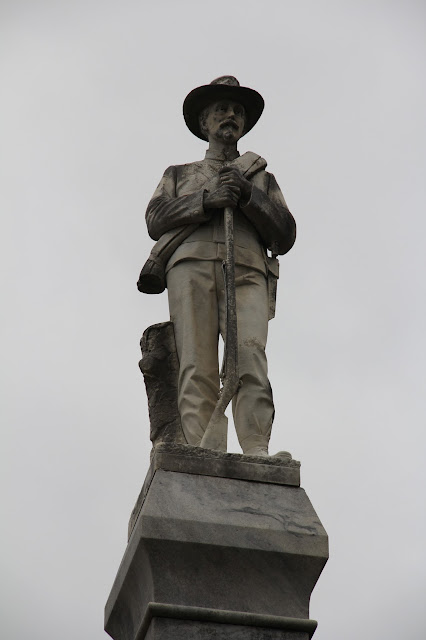 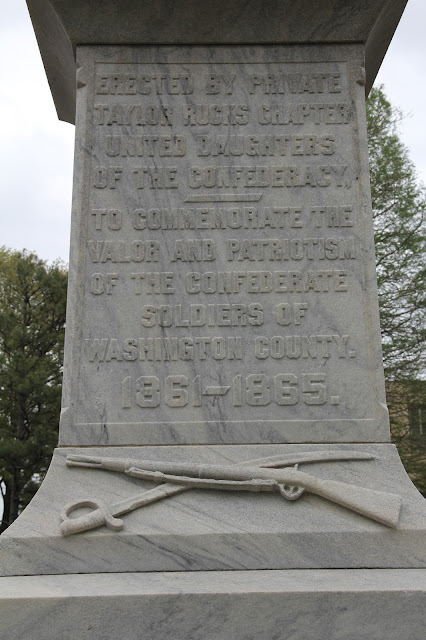 "To commemorate the valor and patriotism of the confederate soldiers" 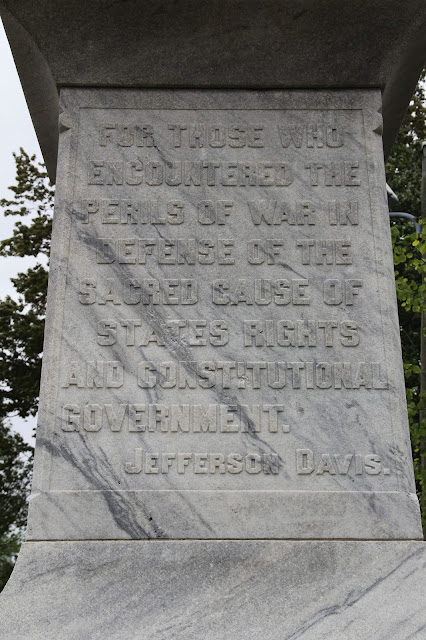 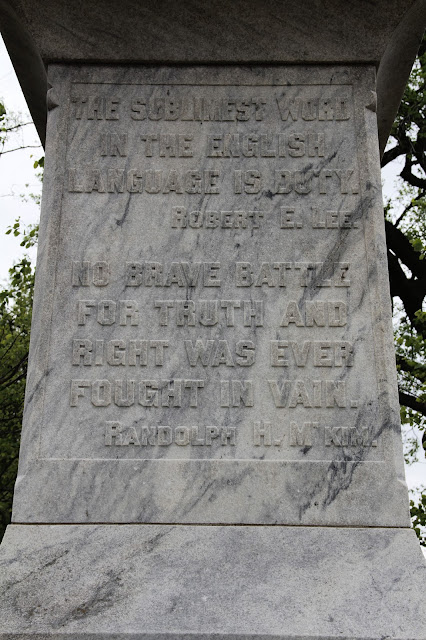 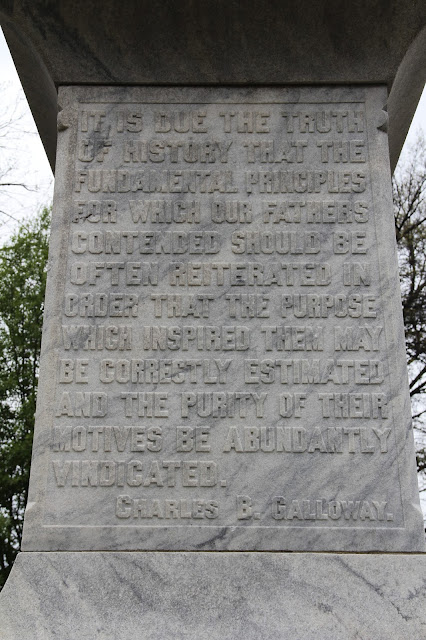 "And the purity of their motives be abundantly vindicated"
The words speak for themselves. This is not a monument just to honor loyal soldiers, it is a memorial to the former south where enslaved Blacks were an accepted part of everyday life. States Rights is how it was framed, but the right each state was fighting for was the right for slavery to continue. Memorials like this exist as if slavery never happened. They offer no healing from its horrors and lasting legacy. Mississippi has passed a law making it illegal to remove any confederate monuments like this.

If I were a descendant of slaves living in this county, this memorial would be a constant reminder of a time when whites bought and sold, raped and whipped Blacks. It is a history of the south rewritten by and for whites during the Jim Crow era when whites were trying to put Blacks back in their place. This monument and the monuments to Davis and Lee in New Orleans and elsewhere are one sided history. That history as depicted through memorials needs to be rewritten again to be inclusive of all Americans. Memorials to Confederate leaders and the confederate cause need to come down. 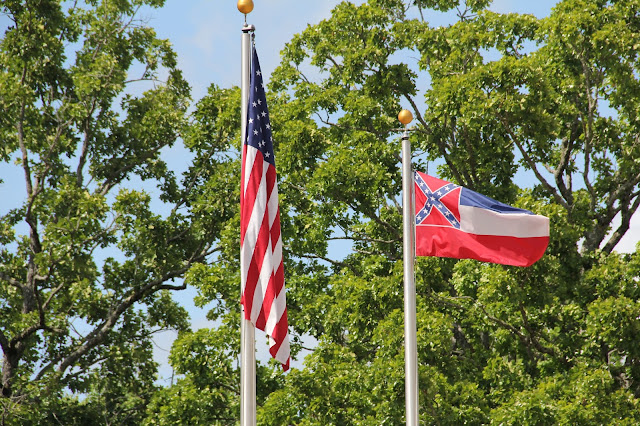 Confederate flags should also come down. Mississippi is the last remaining state to incorporate the Confederate Battle Flag into its flag. Georgia added the Stars and Bars to its flag during the civil rights battle and then removed it when the Olympics came to Atalanta. Some southerners see the Stars and Bars as a sign of heritage and southern pride, others see it as a racist remnant of a time when Blacks lacked civil rights. I side with the latter. (two years later, I'm happy that Mississippi recently decided to replace this flag).
Posted by chad at 5:45 PM