Gaza on my mind 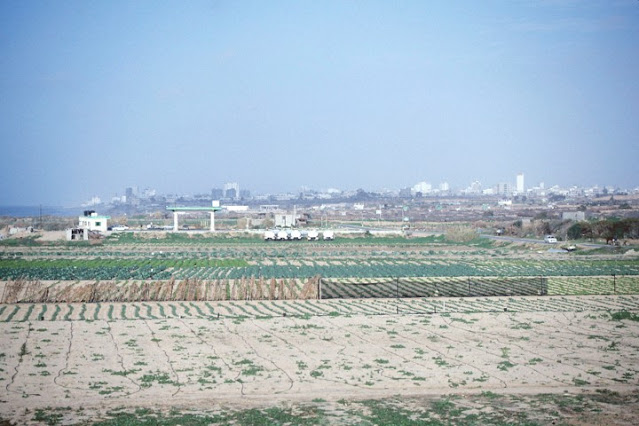 I've only been to Gaza three times. The first was in 1982 when at the end of our BYU Study Abroad in Jerusalem we all loaded on a bus and drove to Cairo via Gaza and the Sinai Peninsula for a week of touring in Egypt. I remember little other than looking inquisitively out the bus windows at this storied place and then waiting at a terminal to cross the border into Egypt.

My second trip was in January 1996 when as part of a Sabeel Conference in Jerusalem I went on a day long field trip to Gaza where we toured the Beach Refugee Camp, visited an Orthodox Church, attended a seminar about Gaza, drove past the Israeli Settlement of Netzarim and then witnessed hundreds of workers from Gaza returning across the border from their day jobs of harvesting crops, building homes and washing dishes in Israel. 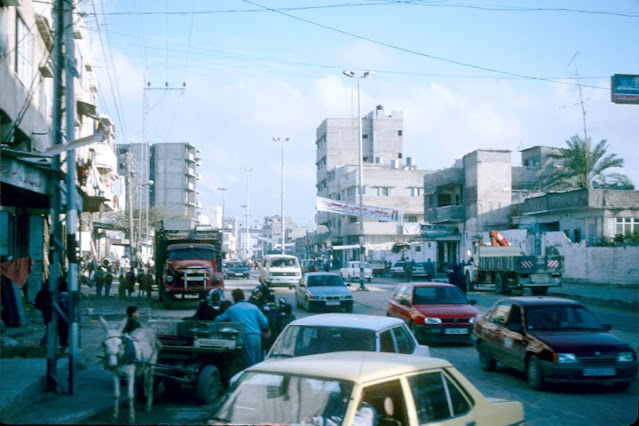 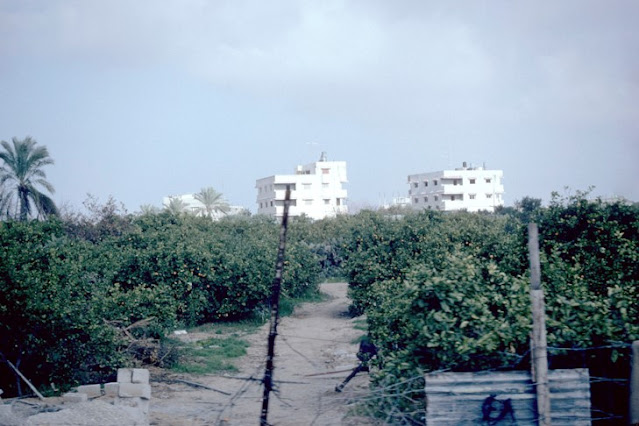 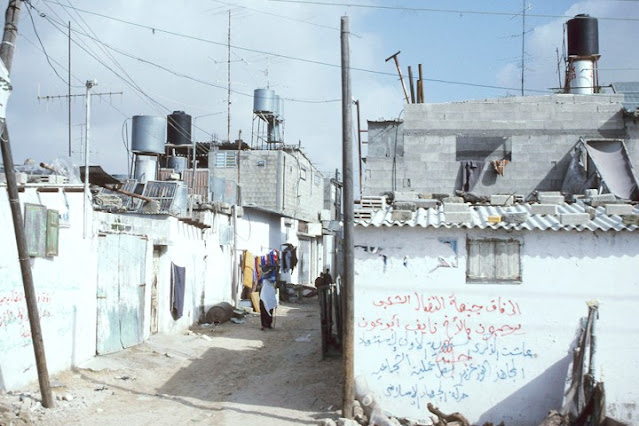 Beach (Al-Shati) Refugee Camp. Gaza is one of the most densely territories in the world. Many of them crammed for the past 70 years into eight refugee camps like the Beach Camp to the northwest of Gaza City. Of its over 2 million residents, nearly 23rds are refugees (which includes the children and grandchildren of refugees) who fled fighting in 1948. 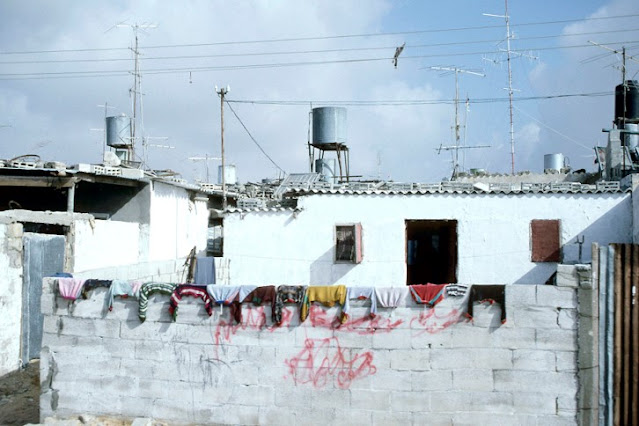 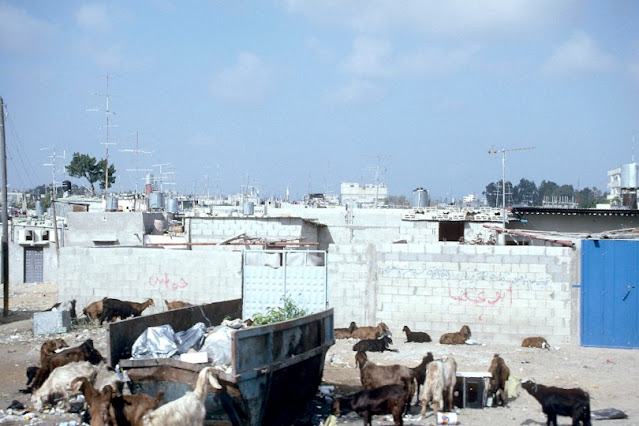 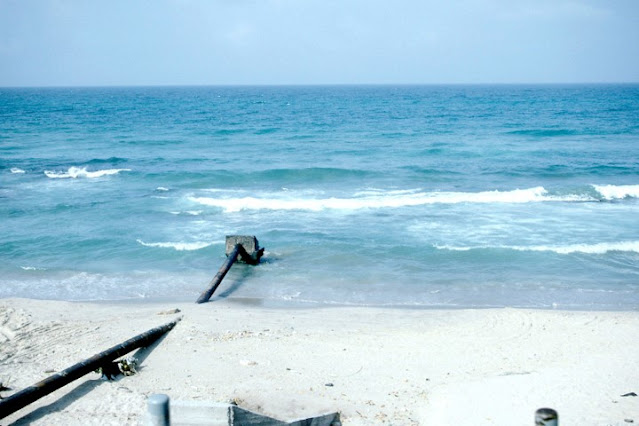 Sewage from the Beach Camp emptying into the Mediterranean. 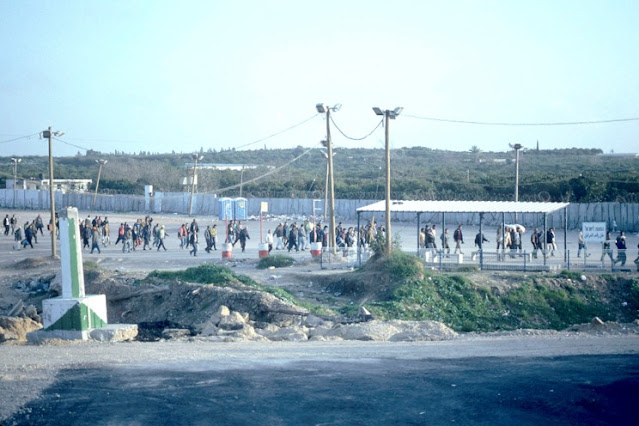 Palestinian workers returning to Gaza (beyond the wall) after a day of work in Israel. After the start of the second intifada (uprising) in 2000 Palestinians have not be able to seek work in Israel which led to increased economic hardship for Palestinian families. 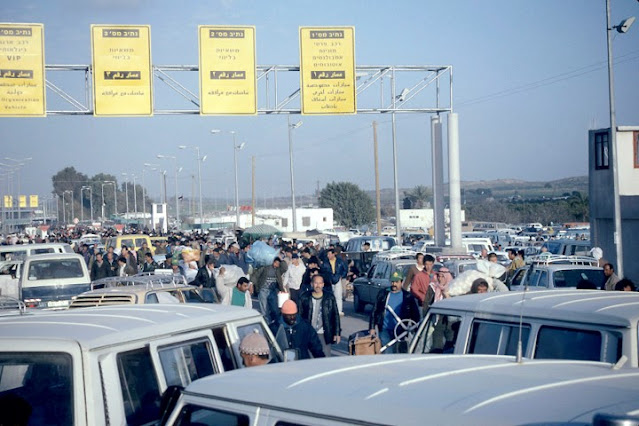 My third trip was in the summer of 1999 when I traveled through Jordan, Israel, the West Bank and Gaza as faculty advisor with the BYU Singers. The singers performed one day in a nice auditorium in central Gaza City where they sang a couple of Arabic folk songs, some Gershwin and some spirituals. This was at the height of the Oslo peace accord detente where hope was in the air. In our peaceful coming and goings we were able to see a lot of new construction including the new Gaza International Airport and many high rise apartment buildings for Palestinians moving back to what they hoped would soon be an independent country of Palestine. 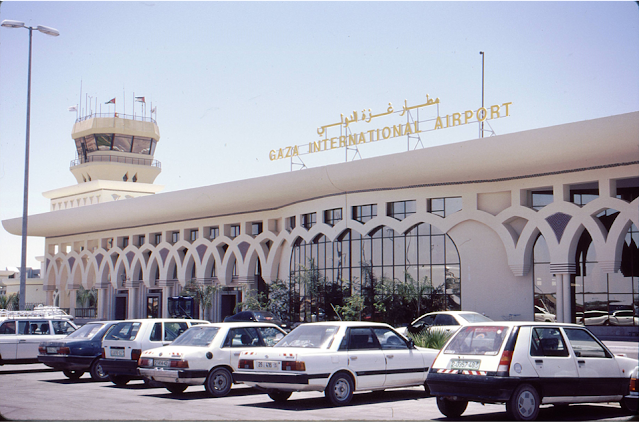 The short lived (1988-2000) Gaza International Airport. All flights in and out were approved by Israeli flight control. 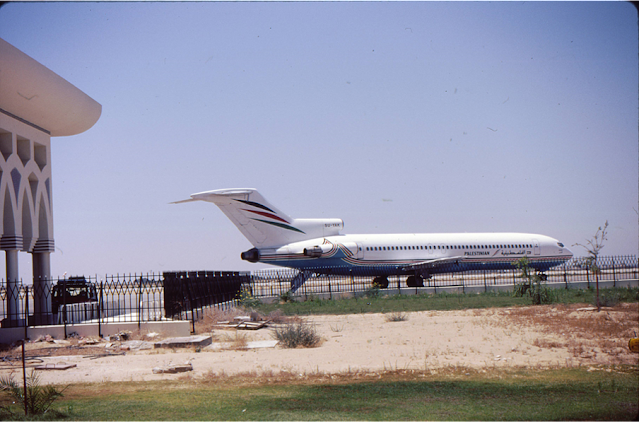 Palestinian Airways. A fleet of three planes. Also short lived. Along with the airport and planes, other improvements during the decade between the two intifadas like elections, ministries of tourism and education, diplomats, stamps, and local police forces all instilled hopes that an independent state would soon result. 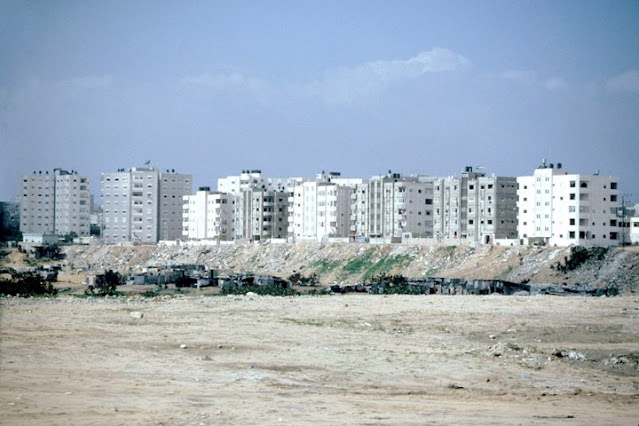 Here is a link to the 1999 Singers singing one of the many songs from their summer tour repertoire. I've got peace like a river, I've got love like an ocean, I've got pain like an arrow, I've got joy like a fountain in my soul. BYU Singers Peace Like a River 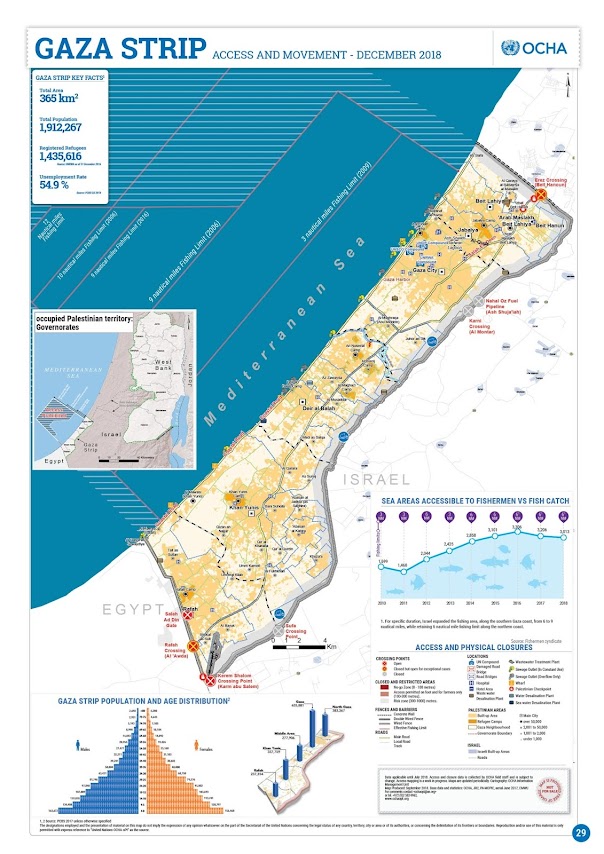 Seven years ago during a similar bombing war between Israel and Hamas, I posted a blog expressing my views about the Israel-Palestine conflict. You can read that post here: http://beitemmett.blogspot.com/2014/07/the-israelipalestinian-conflict-my-view.html

During this past week as I followed the news and social media, I noticed a lot of outrage about the bombings. Among many that I know there was a quick condemnation of Hamas for starting the fight. I am no fan of Hamas and I condemn its targeting of Israeli civilians, but the firing of missiles out of Gaza into Israel has deep roots grounded in the Palestinian desire for self-determination. Hamas is not firing without cause just to injure people, it is firing out of seven decades of frustration and anger that can smolder for years and then burst forth in renewed anger. That frustration is not just a Hamas thing. It is a Palestinian thing as demonstrated by spontaious protests and strikes manifest among the normally quite Palestinian citizens of Israel (who make up 20% of Israel's population) in places like Nazareth, Lod and Haifa, among the Palestinians of East Jerusalem and the West Bank who generally support Fatah, the main political rival of Hamas and among the large diaspora community of Palestinians scattered around the world.

In my four decades of travel and study in Israel/Palestine I have been able to witness where that anger and rage come from. 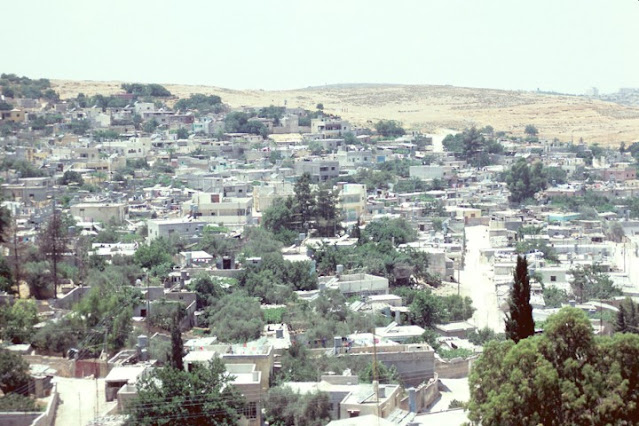 It comes from dozens of refugee camps like this one near Beir Zeit in the West Bank where generations of Palestinians still long to return to the villages and towns they fled during the war of of 1948. 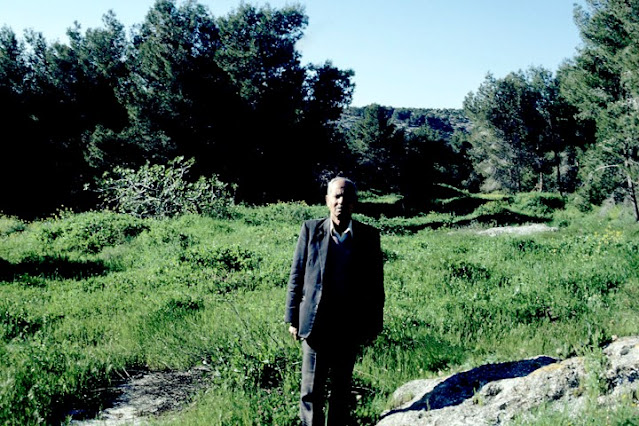 It comes from the sadness of destroyed homes and confiscated lands. This resident of Nazareth stands in the middle of of the rubble of his home village of Ma'alul near Nazareth that was destroyed (like hundreds of other villages) by Israel following the 1948 war so that refugees like this father and his wife and children would not return. 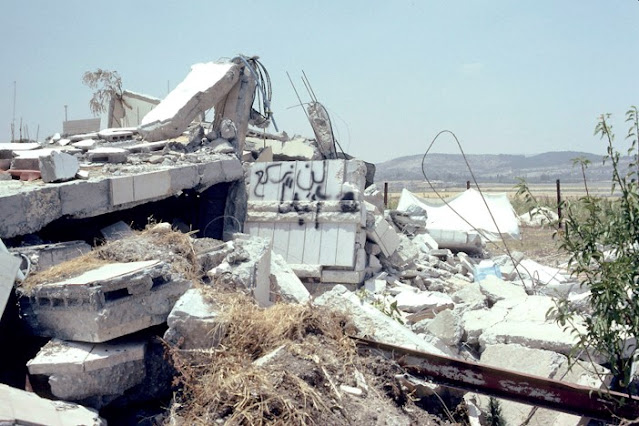 It comes from family homes like this near Jenin in the West Bank that were destroyed in 1989 during the intifada in punishment (without trial) of boys who dared sling rocks or thrown Molotov cocktails at Israeli Solider enforcing a continued occupation. 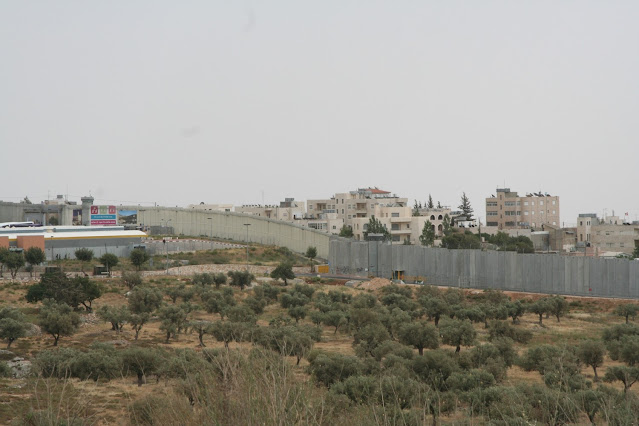 It comes from walls like this one around Bethlehem, 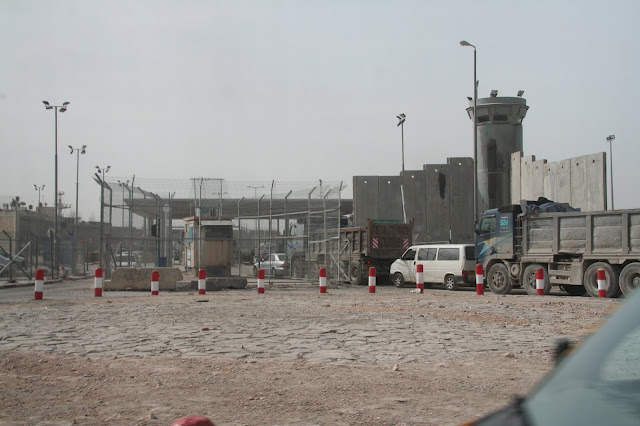 and roadblocks like this one between Ramallah and Jerusalem that, yes have helped to keep out Palestinian suicide bombers, but also are built so as to expand Israeli territorial claims while dividing up Palestinian territories and preventing Palestinians from having normal access to their farms, hospitals, schools, jobs and places of worship. 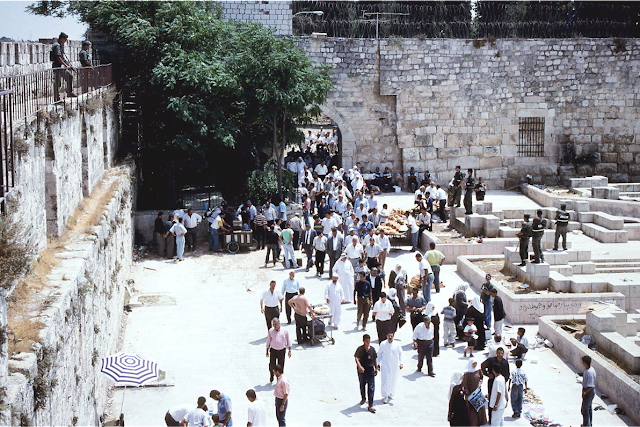 It comes from having Israeli soldiers, police or other security entities always present, keeping watch (here as Muslim worshipers leaving Friday prayers at the Noble Sanctuary--Haram al-Sharif) and recruiting informants to make the lives of Palestinians more difficult and more threatened. 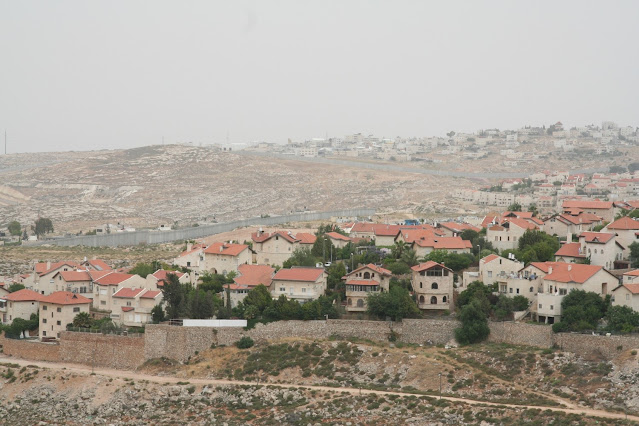 It comes from inequitable distribution and access to water from the Jordan River and from aquifers under Palestinian lands. Noted by the green a of an Israeli Settlement in East Jerusalem and a much drier Palestinian neighborhood on the other side of the wall 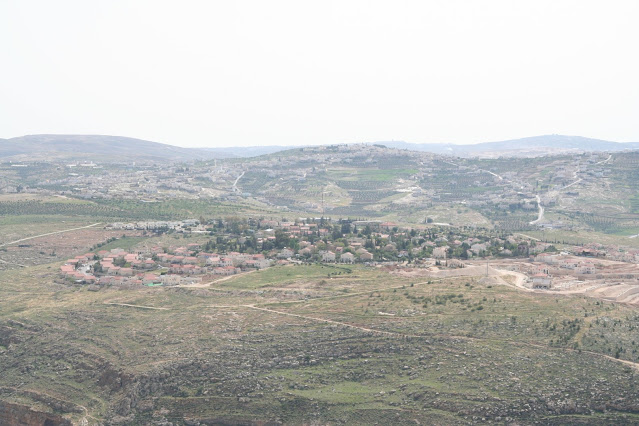 It comes from the encroachment of illegal Israeli settlements into the occupied lands of the West Bank and East Jerusalem. Similar Israeli settlements in southern Gaza were evacuated in 2005. This always expanding settlement of Tekoa (established 1975) to the southeast of Bethlehem sits on agricultural land belonging to the long time Palestinian village of Teqoa on the distant hill. 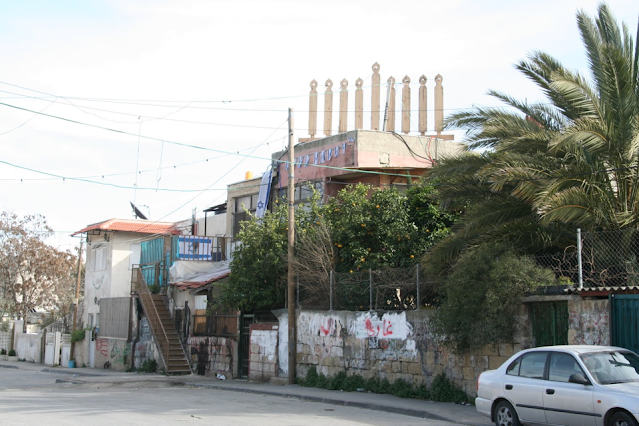 And most recently it came from the ongoing expulsion of Palestinian families from homes (like this former Arab home) in the neighborhood of Sheikh Jarrah so Israeli settler families can move in, the closing of Damascus Gate during Ramadan when many use the entrance for prayers on the Haram al-Sharif, and the tear gassing and stun grenade shooting of worshipers in al-Aqsa Mosque. (read more about Sheikh Jarrah here: http://beitemmett.blogspot.com/2010/02/east-jerusalem-settlements.html)

Sadly these pent up frustrations and continuing injustices often lead to acts of violence and war. Israel is certainly justified in seeking to protect it citizens, but no matter how effective the iron dome is at stopping missiles or how many Hamas combatants, communication centers and tunnels (and innocent civilians) are destroyed by Israel's pinpoint bombs, there will always be more missels, more  tunnels, more protests, more suicide bombers and more Palestinians wanting freedom. So far all of the fighting, the UN resolutions, the diplomatic endeavors and accords, and the economic boycotts and embargoes have failed.  Israel can choose to beat down the Palestinians with their mighty military and US backing and funding, but the Palestinians are in it for the long haul. Sumud (endurance) is their battle cry. If Israel is ever to know true peace, then there has to be peace and justice for the Palestinians either in the form of their own state along side Israel or as equal citizens in a single state encompassing all of the territory and peoples living in Israel/Palestine. There is no other way.

A good way to support innocent victims in Gaza is to donate to UNRWA (United Nations Relief Work Agency) which has long provided educational, medical, microfinance and social service help to the thousands of refugees in Gaza. The UNRWA USA Director of Philanthropy in Hani Almadhoun. He is from Gaza and is a former student of mine and a BYU graduate. He would love to put your donation to work.