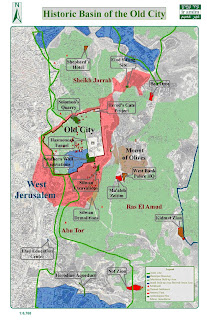 The above map is produced by Ir Amin (http://www.ir-amim.org.il/eng/), an Israeli organization that monitors Jewish settlements in Arab East Jerusalem. The founder of Ir Amin, Danny Seidemann, takes students on a field trip each semester for a overview of the settlement areas as well as the wall. During the last few weeks as I have traversed East Jerusalem with student field trips, family outings and my own walk-about I have taken photos of some of these settlements. From an Israeli point of view the Arab neighborhoods of East Jerusalem are an undisputed part of Israel. From a U.S. government point of view, these settlements are an obstacle to peace and they should be part of the current moratorium on settlement building--which they are not. From an Arab point of view the settlements are more facts on the ground used by Israel to further justify its claim to what Arabs see as an illegal occupation of East Jerusalem. Many of these settlements have been hot topics in the news over the past few months. 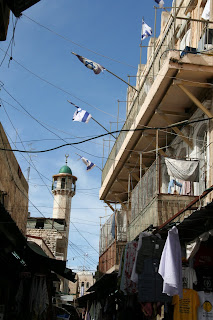 Many of the settlements are in the Arab (Muslim and Christian) quarters of the old city. This is a yeshiva in the Muslim quarter along the Via Dolorosa. In the distance beneath the menorah is the home of former prime minister Ariel Sharon. He moved in back in the 1980s to show that Jews had the right to live in any part of the city. 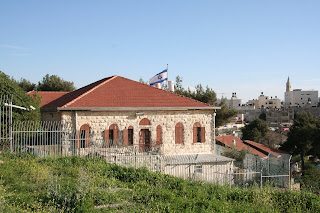 Just down the street from the BYU Jerusalem Center is Beit Orot. 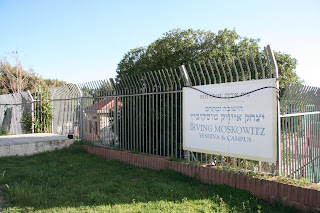 It started out as a yeshiva and is funded by a wealthy American Jew named Irving Moskowitz. 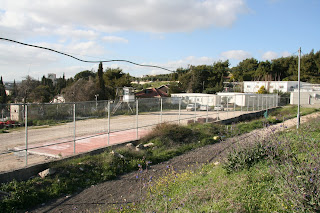 A few weeks ago it was announced that Beit Orot would expand with the construction of housing for 20 or so families. The square tower of the Jerusalem Center can be seen in the distance. 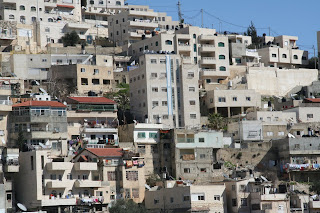 The seven story building with the Israeli flag draped down its side is Beit Yonatan. It was built illegally by Jewish settlers in the middle of Arab Silwan. Five years ago the Israeli government declared it illegal. Recently the Israeli Supreme Court upheld that ruling and ordered it destroyed. The mayor of Jerusalem is not so anxious to have it removed. If he does he will anger many right-wingers. To keep them happy and to make the demolition seem more fair he has also proposed to demolish 70+ Arabs homes in the same neighborhood that are also illegal (never mind that Arabs in Jerusalem are most often refused building permits and are forced to build without permits). 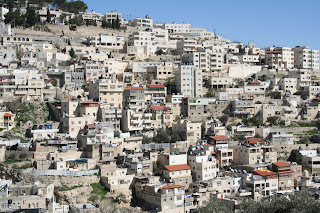 Beit Yonatan in the midst of Arab Silwan 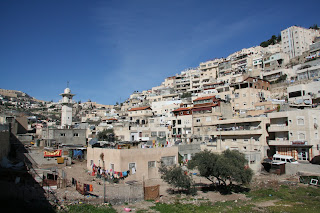 Beit Yonatan is in the upper right. The neighborhood of Silwan straddles both sides of the Kidron Valley in the area of the Gihon Spring and Hezekiah's Tunnel. Most of the Arab homes targeted for destruction are in the Bustan area along the valley floor. The mayor wants to build new apartments for the Arabs and to make this a park like area in honor of the area where Solomon was anointed king. It all sounds like a nice idea, but the local Arabs are resisting saying it is just another land grab. 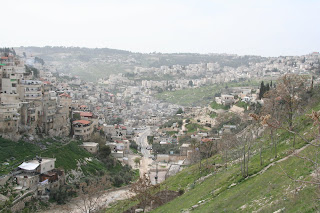 Looking south into Silwan. The right side of the valley is also known as the City of David. It is here where David conquered the Jebusite city and established his capital. 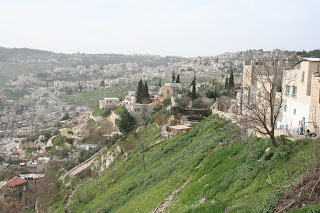 Over the past few decades, Israeli settlers have slowly crept into this part of Silwan. Arab residents felt helpless in trying to hold onto their lands and homes. It was Arabs in this area who enlisted the help of Ir Amin founder Danny Seidemann. The area in front of the pines/cedars is the main area of City of David. 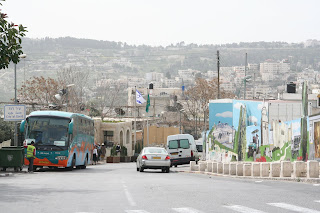 The entrance to the City of David on the left. It is a national park run by a right-wing settler organization (a curious arrangement to say the least). As this park has expanded, more Arabs have lost their homes. To the right behind the decorated wall is the latest excavation in the city of David. 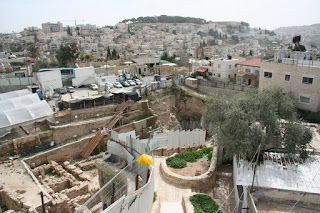 The excavations abut right up to Arab homes and undermine their stability. The intent of the excavations in this area is to find more links back to David and Solomon in order to give further legitimacy to an expanded Jewish presence. One Israeli archeologist told a colleague of mine that those whose finance such excavations have no interest in the Byzantine/Arab/Crusader ruins that are in the upper layers of theses digs--the only interest is to get down to the Israelite/Kingdom of Judah era. 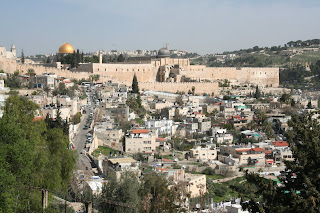 The City of David extends southward from the gray domed Al-Aqsa Mosque. Jewish homes are now scattered throughout the area 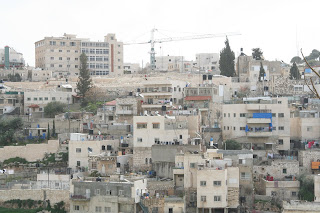 At the northern end of Silwan is another settlement called Ma'aleh Zeitim. The crane is busy at work building housing for Jewish settlers. Further up the Mount of Olives a large flag flies above a several story settler building near the Pater Noster Church and the Mosque of the Ascension. 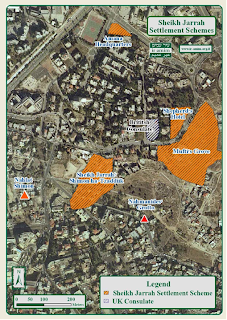 The Sheikh Jarrah neighborhood is north of the old city. The tomb of Simon the Just (Shimon ha-Tzaddik) is a sacred site for Jews that is located in the neighborhood. Up until the 1948 Jews lived in homes surrounding the tomb. These Jews fled west in the 1948 war and eventually Arab refugees fleeing east were settled in these homes by the UN. Last fall these Arabs were evicted from the homes they have lived in for over 50 years with the justification that the homes were once Jewish owned. The problem with such a policy is that it does not allow Arab refugees the same right to claim homes in West Jerusalem (or Jaffa, Haifa, Ramla etc) that they left in the 1948 war. 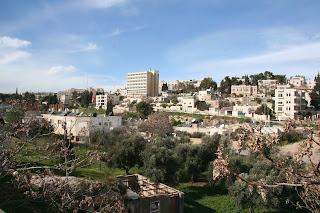 This is the disputed area. 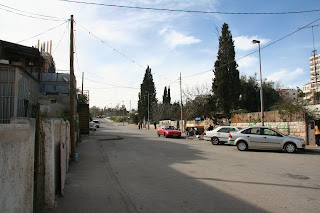 One Jewish home is on the left (complete with menorah on top). The recently inhabited Jewish homes are on the right. 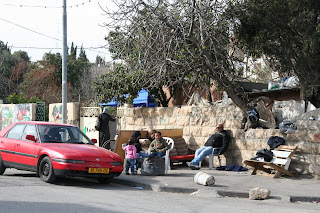 For several months last fall, the evicted Arab families camped in tents on the side walk in front of their former homes. The tents are no longer there, just chairs where the residents sit in protest. Every Friday afternoon, Jews (many Jews are against these settlements) and Arabs come here to protest the evictions. 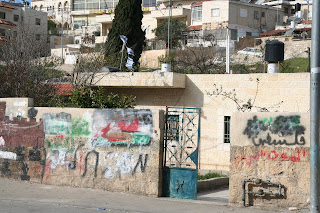 One of the disputed homes--Israeli flags now fly above it. 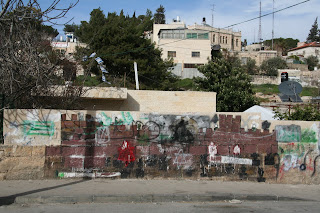 The graffiti on the front wall is also contentious. The Arab cityscape is defaced with Stars of David which are then blotted out. 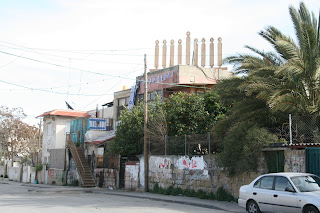 The longer inhabited Jewish home across the street. 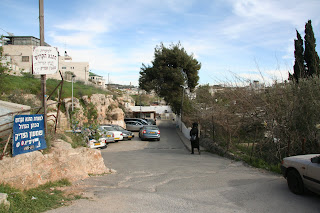 Behind the newly occupied homes is the tomb of Simon the Just--at the end of the street. 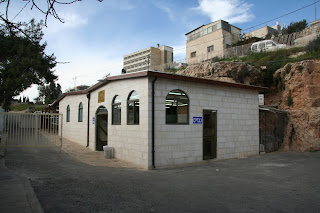 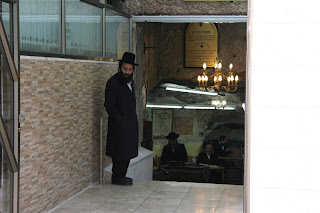 I peaked down into the tomb area where Orthodox Jews were busy with prayers and study. 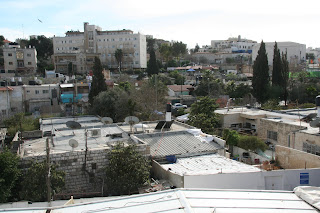 Looking south you can see the roof of the tomb (bottom of screen), the menorah of the home across the street from the newly disputed homes and if you look close in the distance you can see one more settler home (to the right of the tall building) with Israeli flags flying. 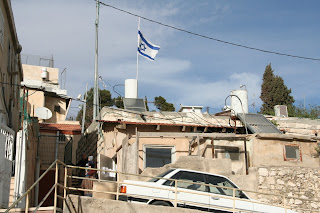 To the north up the hill from the tomb are more settler homes. 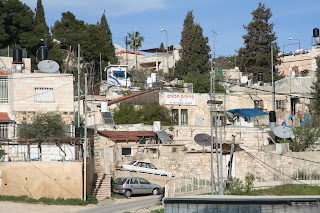 Above those homes is a guard tower. 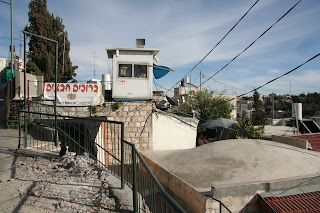 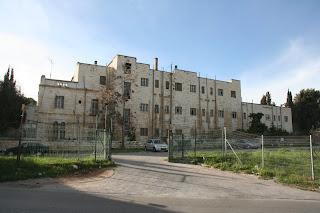 A little further north is the disputed Shepherd Hotel. Once Arab owned it is now Jewish owned. The change in ownership has also been contentious. More Jewish housing is planned for this area. All of these settlements in Arab areas are leading to greater tension in Jerusalem. Arabs are fast losing hope for any fair solution of sharing the land.
Posted by chad at 6:11 AM