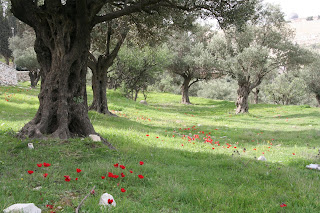 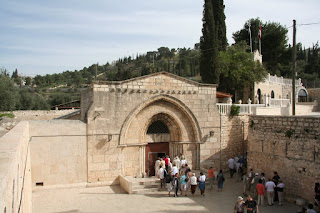 Next to Gethsemane is the Church of the Assumption (Mary's Tomb). This Church is one of the jointly shared churches regulated by the Ottoman Status Quo agreement. Since the Roman Catholics have the Church of the Dormition on Mt. Zion, they do not maintain a presence in this church, even though the Status Quo grants them the rights. It is thus the Greek Orthodox and Armenians who have rights as the main claimants with the Syrian Orthodox, Copts and Ethiopian churches have additional rights. 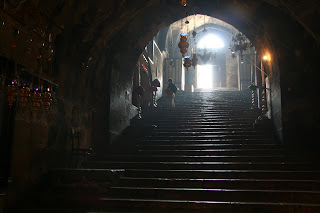 The cross shaped church is in a grotto. 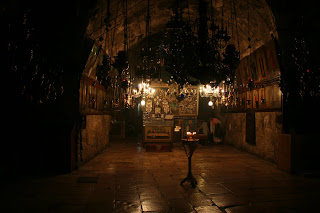 It was a Sunday morning and two Orthodox priests were just finishing a service. The empty tomb of Mary is behind the altar. 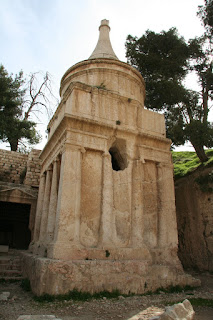 We then walked down the Kidron Valley to the so called tomb/monument of Absalom, son of David. We read the biblical account of how his head got caught in a tree and then David's general Joab killed him (2 Samuel 18). 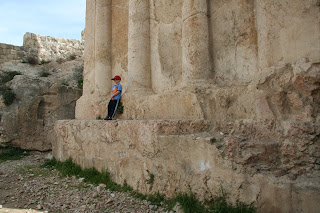 I then related an account of an ancient Jerusalem custom where fathers would bring their rebellious sons to this monument and throw stones at it to illustrate the fate that befalls sons who rebel against their fathers as did Absalom. One guide book says that archeologists found the base of this structure covered with piles of stones, which indicates the popularity of fathers trying to teach their sons to be obedient. Let's hope willful Will was listening! :) 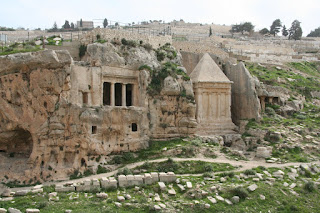 We climbed up (via a set of metal stairs) into the tomb of the sons of Hezir (left) which is most likely a family tomb for a wealthy priestly family from the Hamonean period. Zechariah's tomb--which is solid stone and cut from bedrock (right) is associated either with Zechariah the son of Jehoiada the priest (2 Chronicles 24) or Zechariah the prophet. 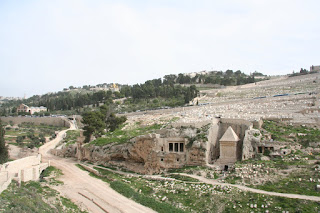 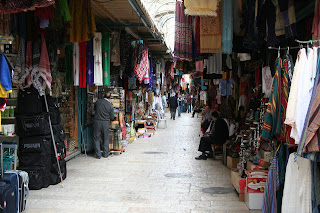 We climbed out of the valley and entered the old city via Dung Gate. We then headed to shops on Christian Quarter road. Sarah bought some leather sandals. 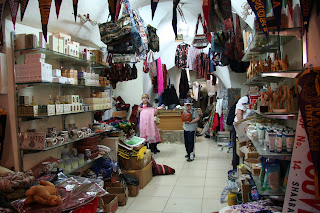 Then in Shaban's shop (where BYU students love to shop) Sarah got a shoulder bag, Joel a leather scripture tote--with the skyline of Jerusalem imprinted on it, and Will a wool stuffed ram (which he is holding out from behind Sarah). 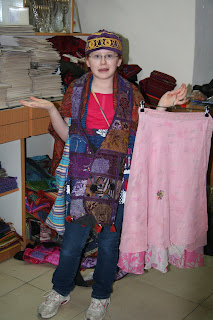 Sarah already has two skirts and a scarf from this shop and would have loved to have bought more. The bag she bought is the striped blue bag hanging on her right shoulder. From there we had hummus for lunch at Lina's restaurant. Then we walked down and up through the Kidron Valley back to the center. We have enjoyed evenings of Olympic watching the past two weeks via the Eurosport channel. Last night and today were full of thunderstorms.
Posted by chad at 8:38 AM