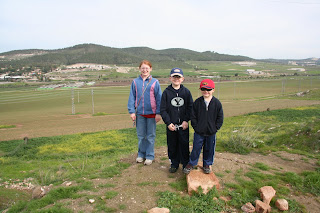 Yesterday (February 9th) we took the kids out of school so they could do some on site learning. Sarah and Joel both have religion classes at school so they thought reading bible stories on site with their dad was a good substitute. We traveled to the Shephelah (Judean lowlands) via Jerusalem Orient Tourist Travel buses. Our first stop was Beit Shemesh overlooking the Sorek Valley. Samson was born across the valley in the village of Zorah. He eventually headed down the valley to Philistine territory where he met his demise. We also recalled the story of the Philistines, who when their god Dagon kept falling over, decided they had to get rid of the captured Ark of the Covenant. They returned it in a new wagon pulled by milk cows to the wheat field in the valley (behind the kids) below Beit Shemesh with offerings of golden emerods (that would be a interesting to see) and golden mice (see 1 Samuel 6) 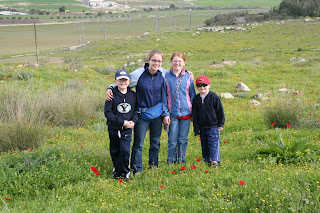 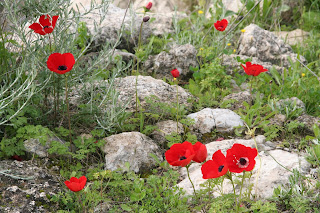 This was a wonderful time to visit the Shephelah--cool and green with plenty of wild flowers thanks to the winter rains of a Mediterranean climate. Last September it was a hot dusty, brown field trip. We enjoyed seeing dainty red anemones throughout the day. 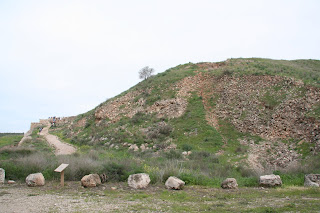 Our second stop was Lachish--one of the strongly fortified cities of Judah. The ramp on the left leads up to the L-shaped gate that led up to the large tel. The rocky slope on the right is where Sennacherib had a siege ramp built for the Assyrian conquest in 701 that was recorded in large relief carving in the palace of Ninnevah (which we saw in the British Museum in December). After defeating Lachish, the Assyrians moved northeastward to Jerusalem, there righteous king Hezakiah listened to the prophet Isaiah and did not surrender. The Lord then delivered Jerusalem by sending an angel to wipe out the Assyrian army in their sleep (see Isaiah 37). 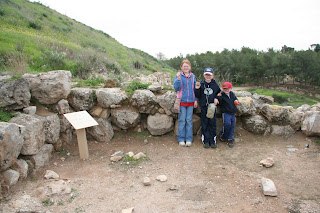 Prior to the Babylonian destruction of Lachish in 589 BC, someone wrote some letters on potsherds that were found in this gate house room. One of these Lachish letters told how the signal fires of Azekah to the north could no longer be seen which meant that tall, fortified Azekah had been destroyed by the Babylonians and Lachish was next. I told this story to the students up on top of the tel as we looked north to Azekah and encouraged them to imagine the fear such news would cause for the Judahites in Lachish. I bet that fear was much the same as that experienced by the people of Jericho when the Israelites encircled their city. From Lachish the Babylonians moved up to Jerusalem which this time lacked a righteous leader and enough righteous inhabitants to warrant divine protection. 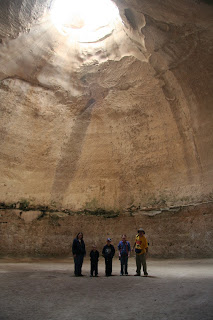 The man-made bell caves at Beit Guvrim (aka as Maresha) were quarried in Byzantine and early Muslim times in order to provide limestone for building. The quarry started out at the top where there is a layer of harder limestone and then continued downward in a cone shape which usually kept the top from collapsing. As the cone shaped caves expanded outward they connected with the lower levels of other caves. 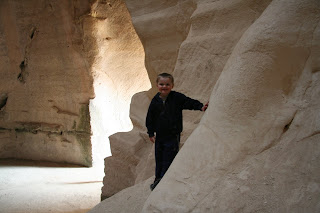 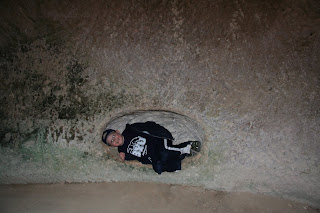 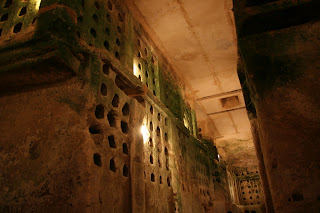 In other parts of Maresha we explored underground structures (also carved for building materials) that were then used for columbarium (pigeon roosts--pigeons were used for food, sacrifices and a source of fertilizer) as seen above, for underground olive presses, for cisterns and for storage. This is now a well managed National Park but back in 1982 it was undeveloped which meant we BYU students got to explore many more of the hundreds of underground human carved caves. One poor student back then started down the stairs into a cistern without a flashlight. She didn't see that the stairway had collapse and so she suddenly fell a dozen feet down into the cistern. Luckily she was unhurt. 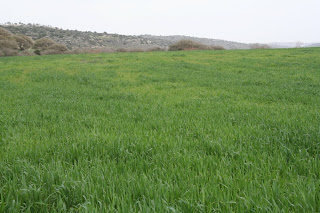 Winter wheat growing in the Valley of Elah. This conjures up all kinds of biblical images of sowers, gleaners, wheat and tares, the blessing of rain etc. 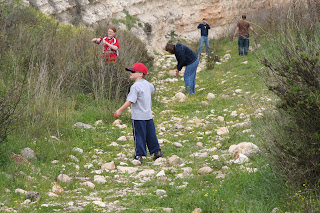 One of the students sprained her ankle and could not wander far from the bus. Marie gathered some smooth stones from the stream bed for her. 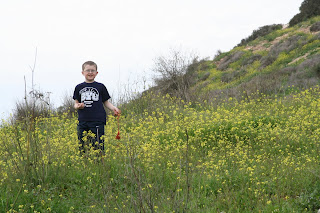 Joel is a determined slinger. He keeps practicing. I was hit with one misfire, but not at the same velocity as a David slung stone. 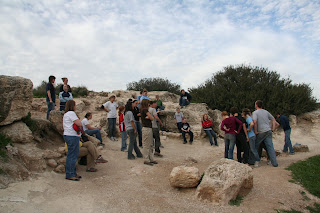 We then explored some limestone carved caves dubbed Micah's Cave because it is near where the prophet Micah is from. We stopped here earlier but there were three bus loads of Orthodox Jewish girls on a field trip who were mobbed around the cave entrance so went slinging first and then backtracked a little. Joel and Will are right at the entrance. 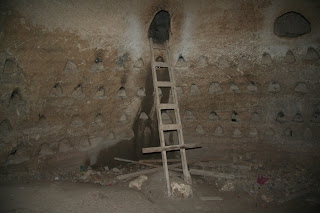 To enter the cave (also used as a colubarium) everyone had to crawl on hands and knees for about 20 feet and then turn around in the tunnel so your feet come out first and climb down the ladder. Last semester the ladder was shorter and didn't quite reach the tunnel exit. When my colleague Bill Hamblin tried to turn around and reach the top of the ladder he misplaced his foot and fell to the cave floor. The injury to his shoulder kept him for going on the Egypt Field trip the next week. 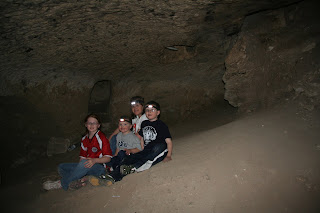 There were no such injuries this time--only one skinned elbow. We all got head lamps for Christmas 2008 which were put to good use today. 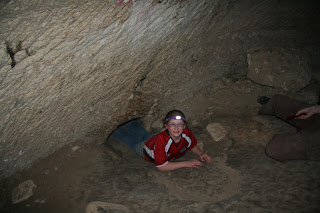 Sarah (with mom's permission) took off with some of the students through another tunnel into another big cavern. Here she is crawling out. This cave is a favorite stop for all. 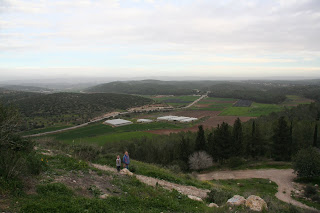 Final stop was Azekah with its great view down on the valley of Elah. The valley circles around the hill of Azekah and then where the road crosses the valley it turns left and heads eastward towards Bethlehem again. The Philistines were on the hill side on the far/south side of the valley near where the road cuts through the trees and the Israelites were on the north side (on the back/unseen side of the closer forested hill). 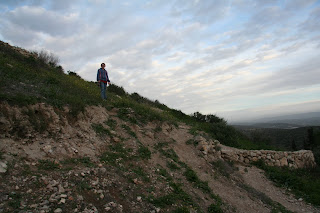 Walking down from Azekah the kids enjoyed finding more potsherds for their collection. Sarah and Joel both found nice parts of pottery handles. A great day!
Posted by chad at 12:21 PM