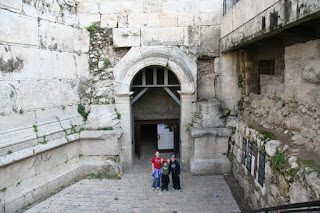 Last Sunday (January 31st) afternoon we walked the rest of the walls of the old city from Damascus Gate to Dung Gate. We entered through the Roman Gate of Hadrian built after the 70 AD destruction of the city. This is the level of the city at the time of Jesus. At the upper right you can see the current street level leading into the current gate. 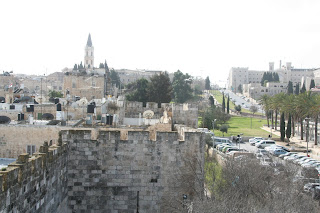 Looking west from Damascus gate. The Roman Catholic steeple of St. Savior's Church marks the Roman Catholic portion of the Christian Quarter. Outside the wall on the right is the Notre Dame Hospice. 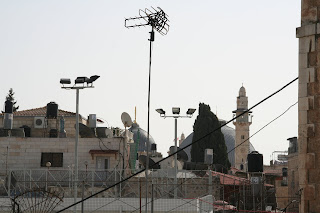 Skyline of the Christian Quarter 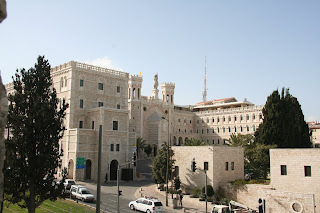 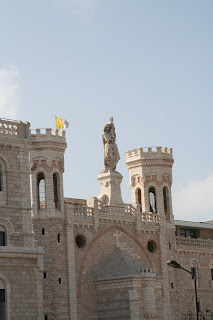 Nice statue of Mary hoisting the Christ child up on her shoulder. 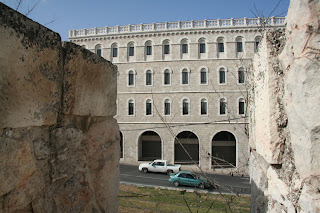 A view through the turrets of the wall to the south wall of Notre Dame. From 1948-67 the border between Jordan and Israel ran between the hospice and the old city. Israeli soldiers used the hospice as a front line battlement facing Jordanian soldiers on the walls. I remember the walls of Notre Dame in 1979 when its facade was still pockmarked from Jordanian bullets. 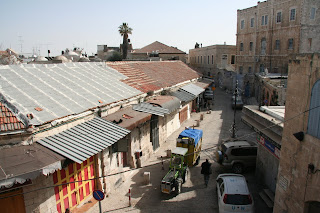 The view from the top of New Gate looking into the Christian Quarter. Most of the shops are Christian owned and therefore closed on Sunday. Notice the narrow tractor hauling garbage out of the old city. 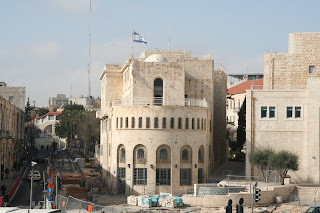 The view from the NW corner of the old city wall across to City Hall and the Mayor's office. Its pockmarks from the 48-67 period are left as a reminder of when the city was at war. The street to the left of city hall is Jaffa street which is torn up with construction for the light rail system that connects downtown with settlements to the north east. Looking west (on a hazy day) to the large rectangular shaped King David Hotel and the tower of the YMCA. 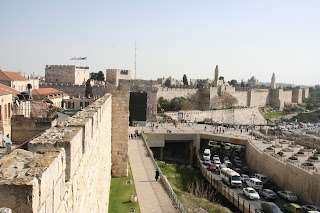 Looking south to Jaffa gate and the citadel (with flags flying and an Ottoman era minaret) . The underpass is on an elevated road because when it was being constructed burials sites were found and Orthodox Jews always oppose any buildings atop burial sites. It is consider a minor miracle that no burial places were found during the construction of the Jerusalem Center given that most of the Mount of Olives is checkered with burial sites. If tombs had been found the center may not have been built. The UN policed Jordanian-Israeli border once ran down this west side of the old city. 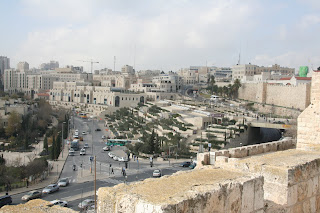 For many years the Israeli side of no-man's land running along the border was the site of vacated bombed out buildings. Over the years there has been a big push to redevelop this area. The over pass walkway leading out of Jaffa Gate now leads to a parking garage (three hours free parking!) under the tree lined terraces and an upscale shopping center. It is quite a contrast to go from the many small shops in the crowded streets of the old city to the nice wide walkways, plazas and modern shopping arcades across the one-time divide. 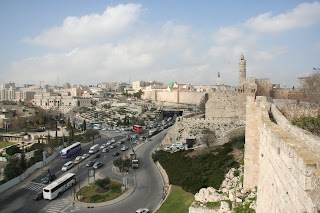 A wider view of the Jaffa Gate area. 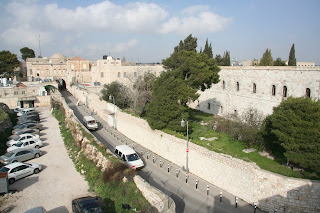 The view from the SW corner of the wall towards the Armenian Quarter--which is a walled quarter within a walled city. The right side of the road is the quarter wall. This is a busy street linking Jaffa gate with the Jewish Quarter. 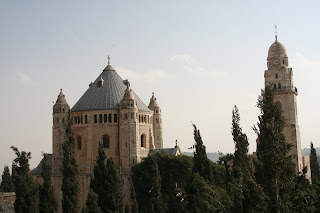 The German built Dormition Abbey (where Mary slept before rising to heaven) on Mt Zion just outside the city walls. It is surrounded by Christian cemeteries. 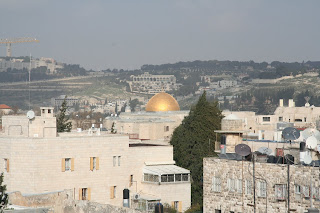 An interesting view across the Jewish Quarter and then the Dome of the Rock to the BYU Jerusalem Center. 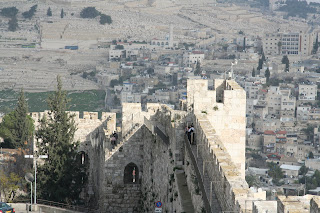 The south wall of the city with the Jewish Cemeteries on the Mt of Olives in the distance. 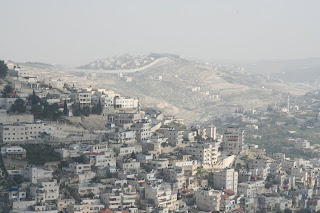 Looking southeast across the Arab neighborhood of Silwan. Notice the Separation Wall running along the hilltop in the distance. 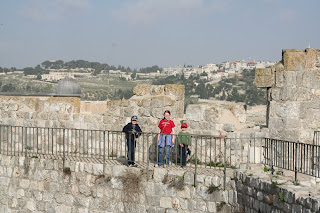 Happy trekkers. We walked down to the city and all along the walls and then back through the old city to Herod's gate where we hailed a taxi to take tired feet up the hill to home. 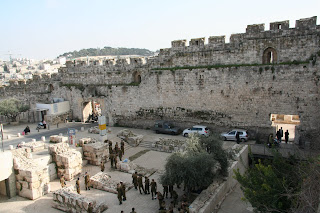 Dung Gate on the left with a new gate (hole in the wall) to the right that is a new addition to accommodate all of the pedestrian traffic coming in to the western wall area. 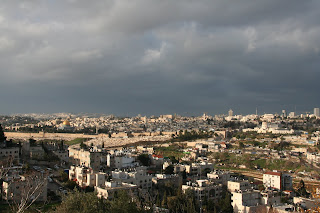 We had some nice rainstorms during the week with non-materializing possibilities of snow. This was a bright morning after a few days of rain. The hillsides are all green. It is a great time to be in the holy land. 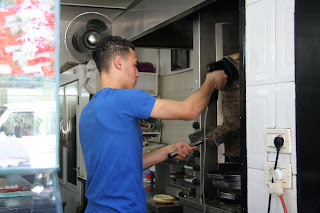 Today was a bright brisk day. We walked down to East Jerusalem for lunch. Will had falafel and the rest of us had delicious shwarma--roasted lamb meat in pita bread. Here the lamb meat is being shaved off the rotisserie. 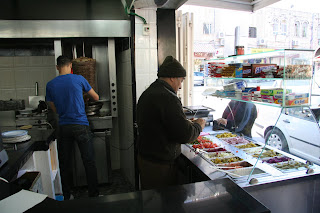 Once the pita is filled with either falafel (fried balls of mashed chick peas) or shwarma it is then topped with various salads and sauces. Marie and I had the works, Joel and Sarah chose just the tomato and lettuce salad. 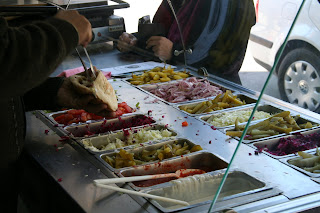 The many toppings--I especially like the sumac covered red onions, the purple cabbage cole slaw, and the Arab salsa. 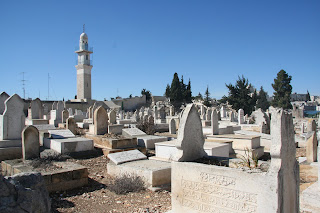 We walked along Saladin street looking for socks for Joel (no luck), then we ventured through a gate between the many shops and climbed up some stairs to a Muslim cemetery that sits atop the hill of Calvary (Protestant/Mormon preferred site). The minaret is for a small mosque located down below just to the east of the rocky face of Calvary. The Garden tomb is to the right (west) of the mosque and Calvary. We tried to walk further over to look down on the Garden tomb, but were shooed away by a caretaker. I used my best Arabic but to no avail. Tomorrow the kids get to miss school so they can go on the student field trip to the Shephelah (Valley of Elah etc.). Should be fun.
Posted by chad at 10:40 AM