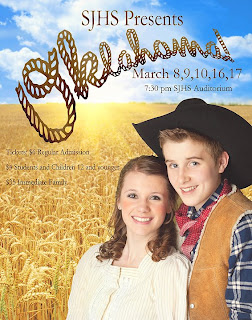 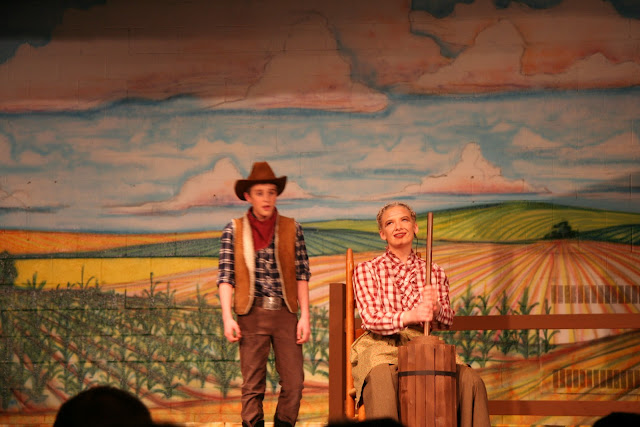 Opening night photos of the Springville Jr. High production of Oklahoma. It is the junior version, which is only 90 minutes long and has no killing or kissing (although director Mrs. Walker added a few kisses given the willingness of Curly and Laurey to put up with all the cat calling from their fellow students in the audience). Aunt Eller is sitting in one of our ladder back chairs that we inherited from mom and dad. 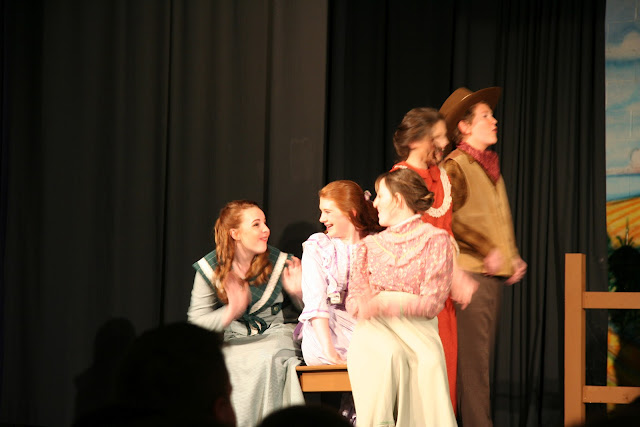 Sarah's first scene--Everything's up to date in Kansas City. There were so many students wanting to participate in the musical that the chorus was divided in to two groups that alternated scenes so that the stage would not be too crowded. 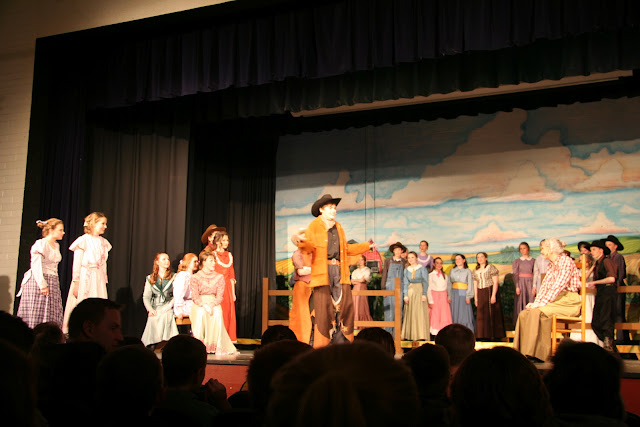 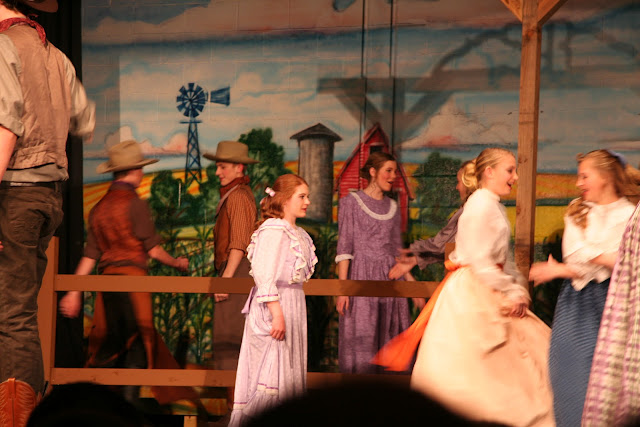 Sarah's partner and several others in the chorus missed their entrance (the music started before they could all get on to the stage) and so Sarah is puzzled about what to do without her dance partner. 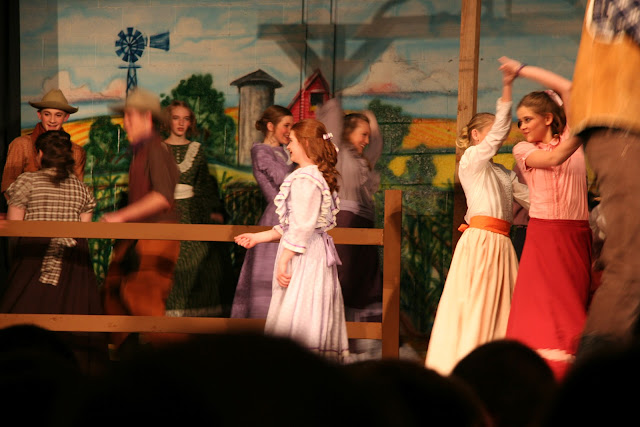 So she improvised and started to dance alone 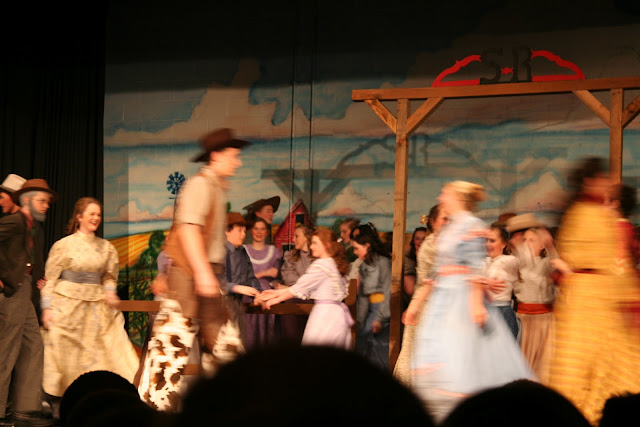 Finally her partner arrived in time for a final swing. 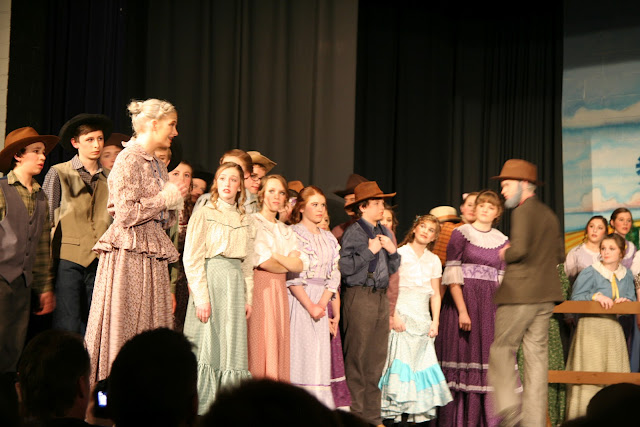 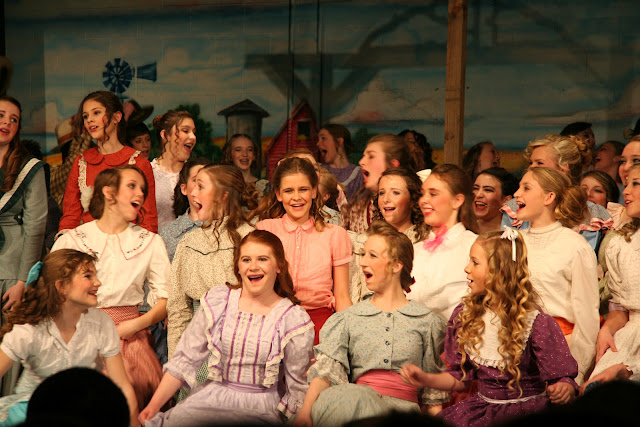 Being one of the shortest means you sometimes get to be out front. 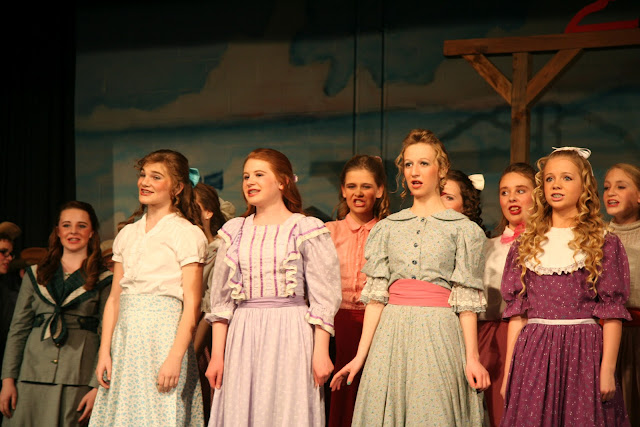 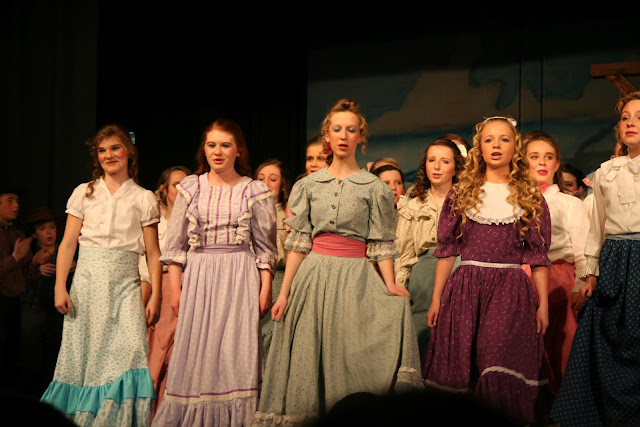 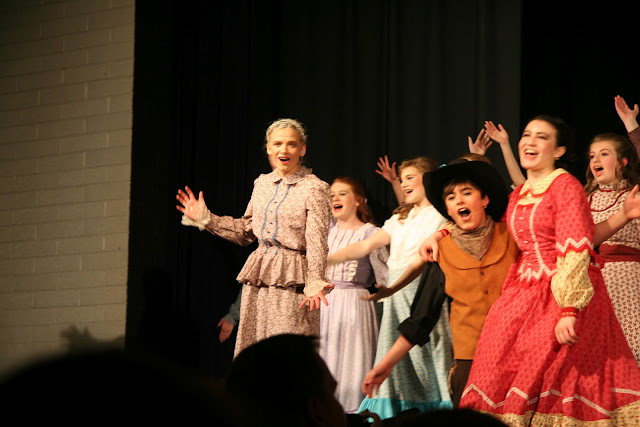 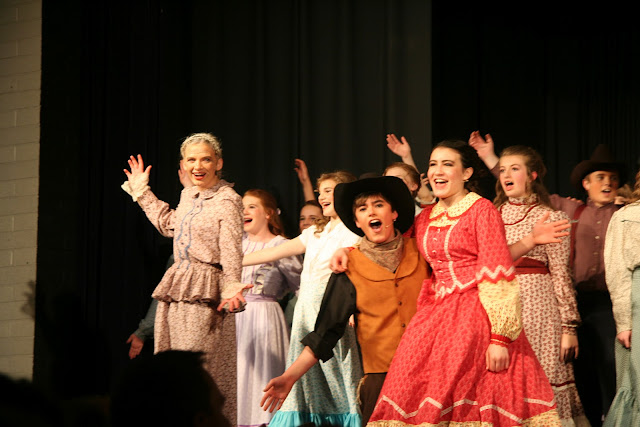 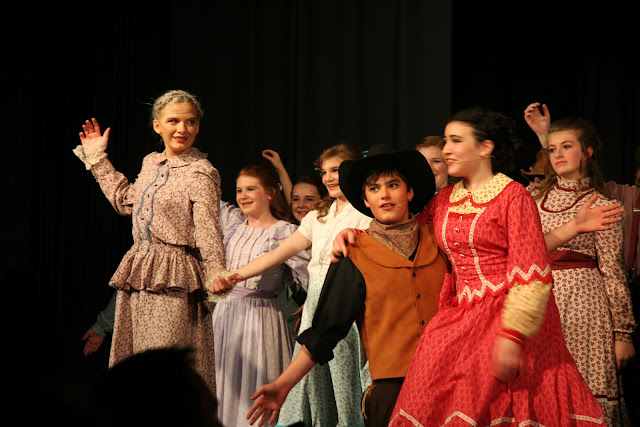 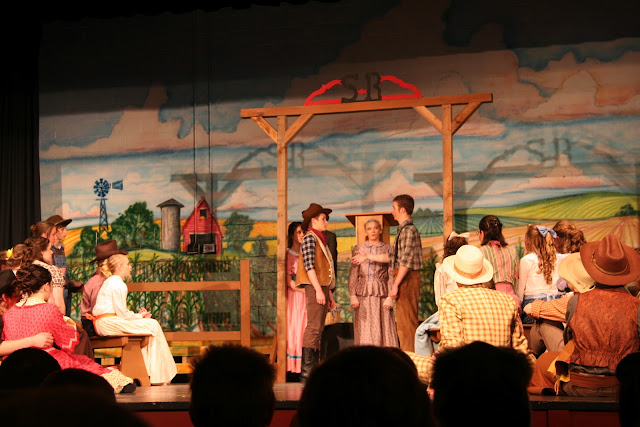 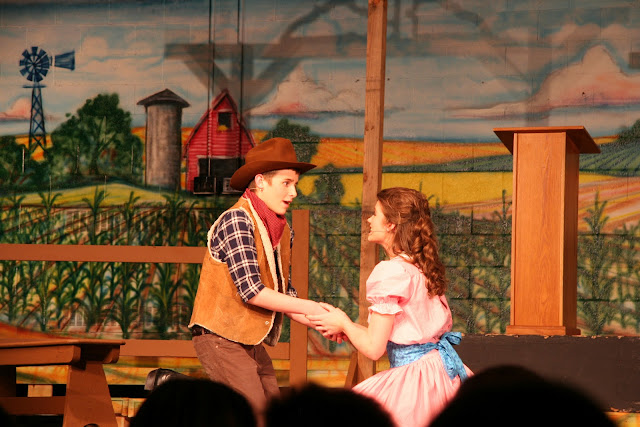 All of the parents volunteer to help out. Last Monday night I helped paint the benches brown. 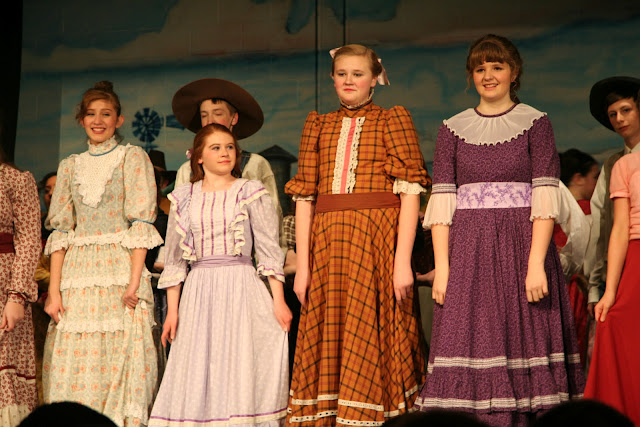 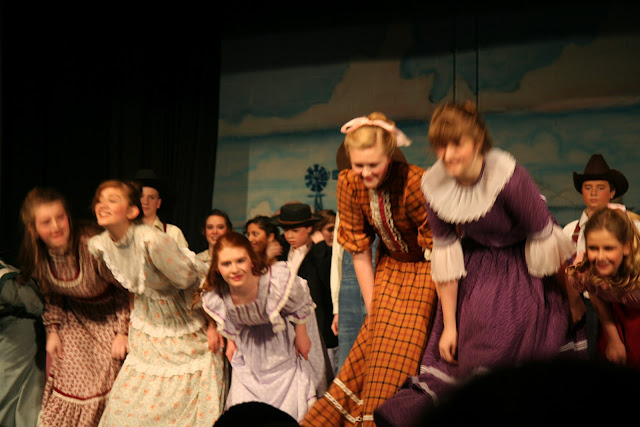 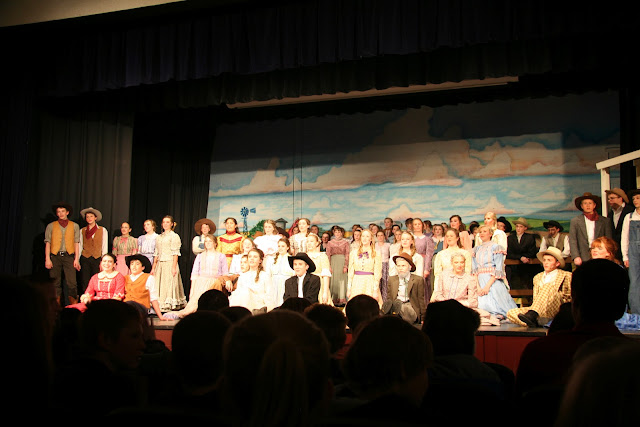 Her final pose, since there were not enough boys to go around, was jumping into the arms of Haylee--her 5" 11" friend (a foot taller than Sarah). Unfortunately this favorite bit of choreography for Sarah was behind too many people to be captured on film. It was a delightful, well done production. 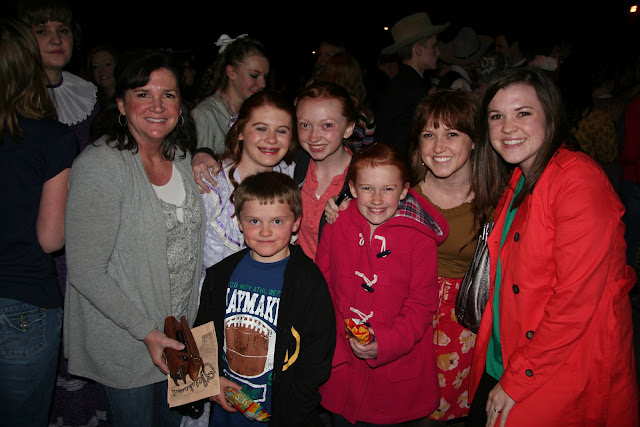 The Lundbergs came to offer their support. Cousin Amanda is also a former SJHS chorus girl. 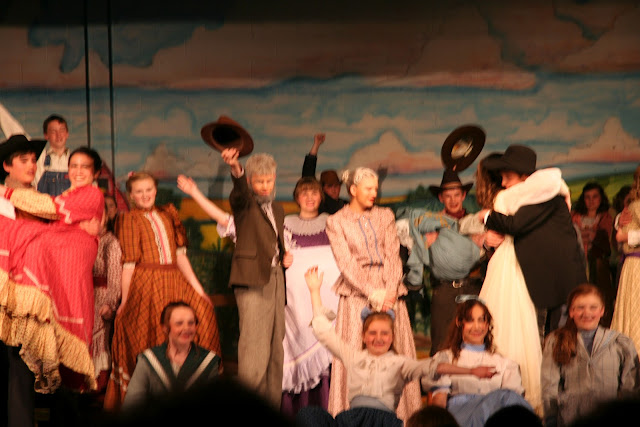 For closing night the next week, Bill and Lorie, Katie, McKinley and grandma Emmett drove down to watch. At the end of singing Oklahoma Sarah jumps into the arms of her foot-taller friend --you can see Sarah's arm and lavender dress behind the old man in the hat. 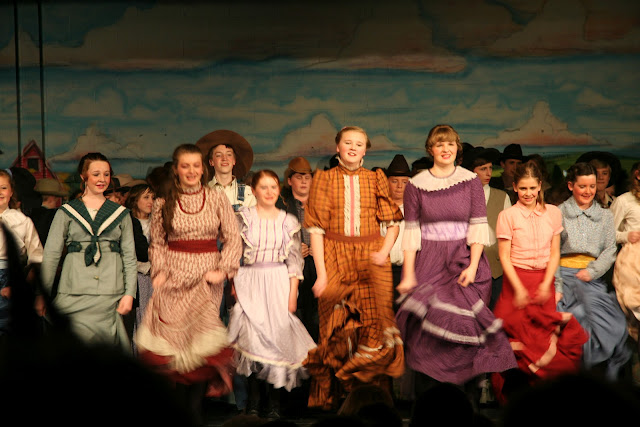 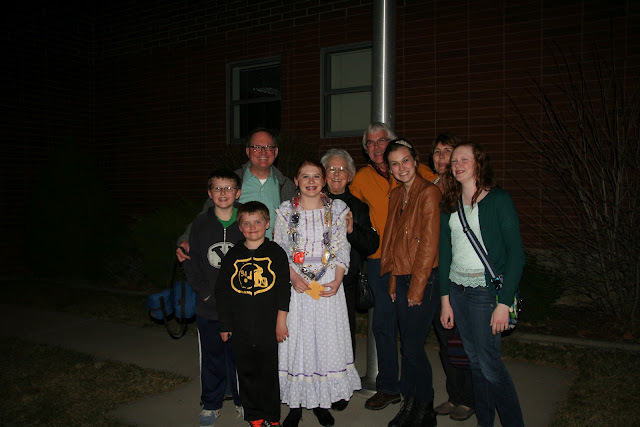 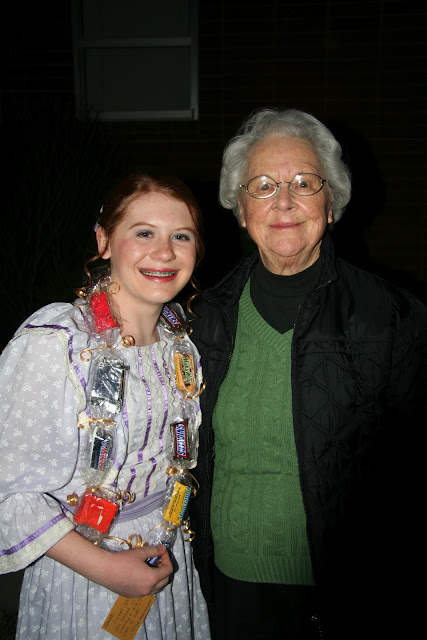