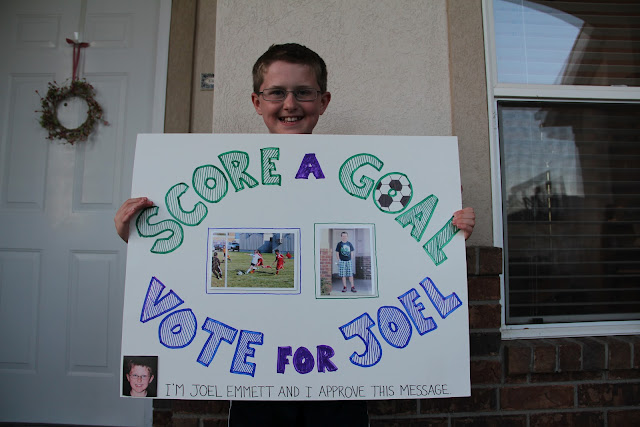 A few weeks ago Joel decided that he wanted to run for student council at Brookside Elementary. To apply he had to write a 250 word essay (which was completed after many uses of the word count tool) and had to complete 5 hours of community service (Joel joined me for a ward service project cleaning up the yard of a widow, he and Marie made 10 sack lunches for Provo's Food and Care Coalition, he helped wash the fence of our elderly next door neighbors, and he joined all of us in helping Aunt Rachel with some yard work in which all three kids had a blast with her old-time push mower). The teachers at Broadside then met together and selected six students to be on the student council out of the forty who applied.  This week the fourth, fifth and sixth graders will vote to decide who from the six student council members will be the president, vice-president and secretary. Joel would prefer not to be president--that way he still gets a Brookside hoodie, to miss classes and to go to a conference at BYU but he doesn't have assembly speaking duties. They each had to submit a campaign poster. Joel's creation was very much a family project.
Posted by chad at 8:24 PM