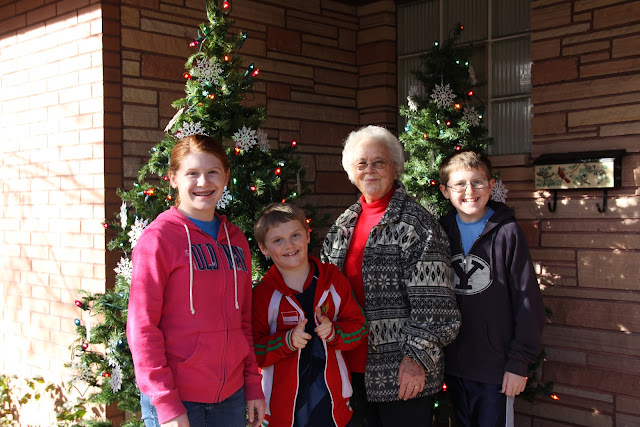 The Christmas season began for us the day after Thanksgiving when we drove to Logan to help Grandma Emmett put up her Christmas trees. Throughout the month of December we enjoyed Advent readings and singing each Sunday night, attending Sarah's candlelight Christmas concert at SJHS, attending the geography family Christmas party at a BYU lodge up Hobble Creek canyon, going on a date with Marie to the BYU Center for Language Study (for whom I teach Indonesian courses) Christmas party, caroling with Joel, Sarah and the rest of the young men and young women in the ward, and attending a most wonderful Mormon Tabernacle Choir concert. I also enjoyed an afternoon of Christmas shopping with Sarah and then an afternoon of shopping with Joel and Will. 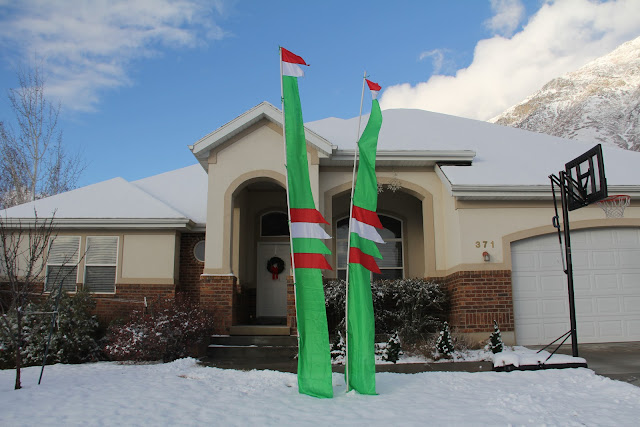 Added to our decor this year were the annual angel gift for Marie and matching nativity ornaments for the kids--handed out the first night of advent. Each year the kids get a new ornament with the intent that when they move away they can take 18 or so ornaments with them to decorate their own tree. On non-snow days we also unfurled Christmas colored Indonesian Independence day banners in our front yard. I bought them this summer in Semarang. 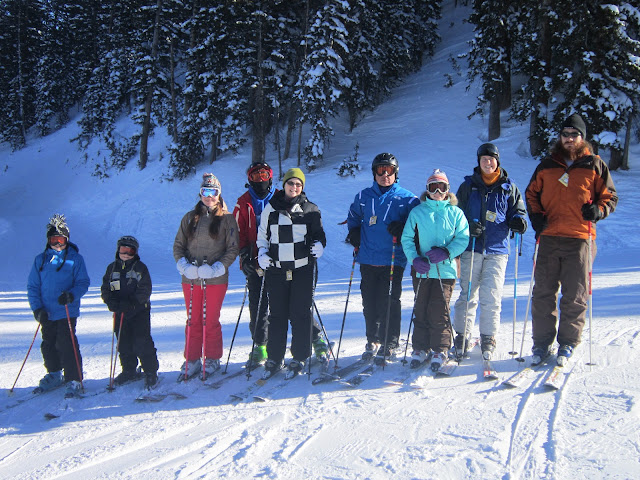 This year the kids all got season passes to Brighton and dad got a ten pack of passes. We started the ski season the Friday before Christmas with a fun ski day with Lant and Diane Pritchett, their son Issac and cousin Emma. The next day Joel, Will and I returned for another great day of skiing, except for the wind at the summit. For Sacrament meeting on the Sunday before Christmas, Sarah played a piano solo of "Bring a Torch Jeannette, Isabella." She played the same song at the kids' piano recital the first week in December and at a Stake Youth musical fireside a few weeks later. All three performances were outstanding. Sarah and I also sang in the Ward Choir for the Christmas program two Sundays before Christmas. We sang "Away in a Manger" to the primary tune "I Thank thee dear Father". 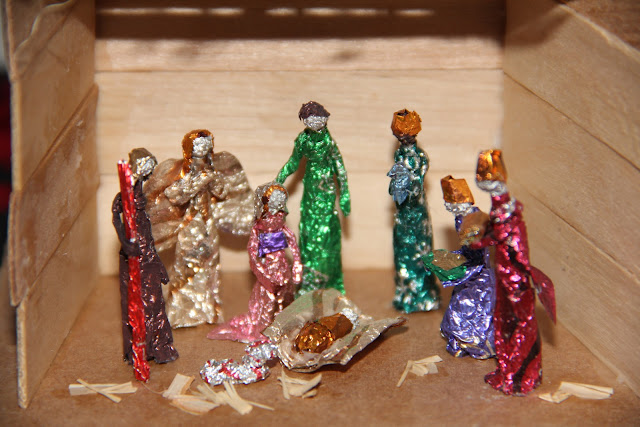 On Christmas Eve, Marie's friend Debbie Hendrickson (they worked together at BYU admissions) came for a surprise visit with her 17 year old daughter Rachel to present Marie with the above nativity. Debbie knew that we collected nativities. Years ago Rachel discovered in Primary that she could make figurines out of the foil wrappers for Hershey Kisses she got in primary classes. Over the years she has perfected the art. The above nativity figures are made entirely with Hershey Kisses wrappers and glue. We love it and feel honored that Debbie thought of us. 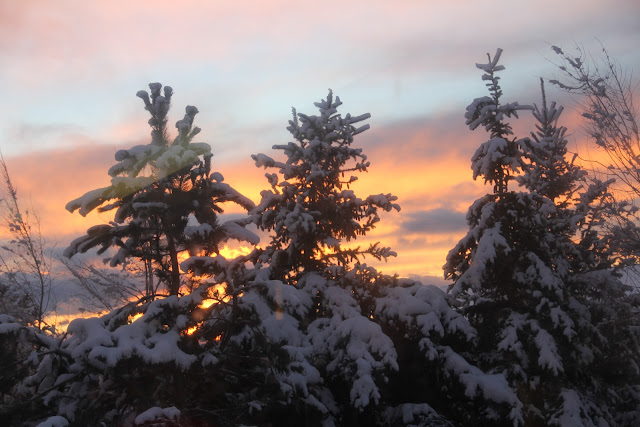 Christmas Eve we gathered at the home of Aunt Anna for the traditional Tueller posada. Fresh snow and a great sunset made the evening even more wonderful. 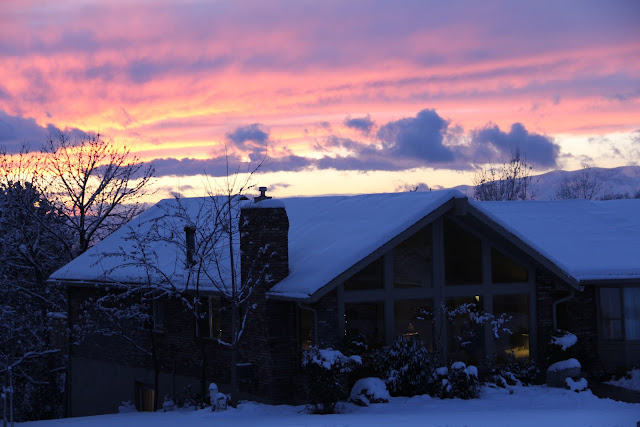 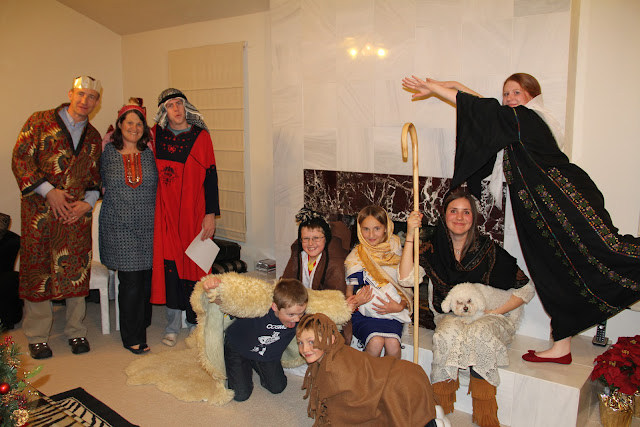 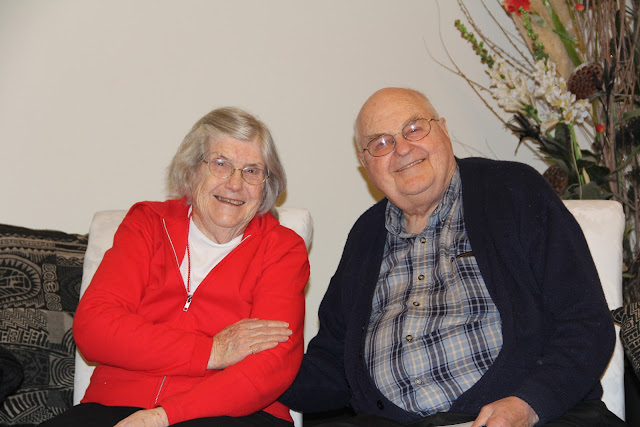 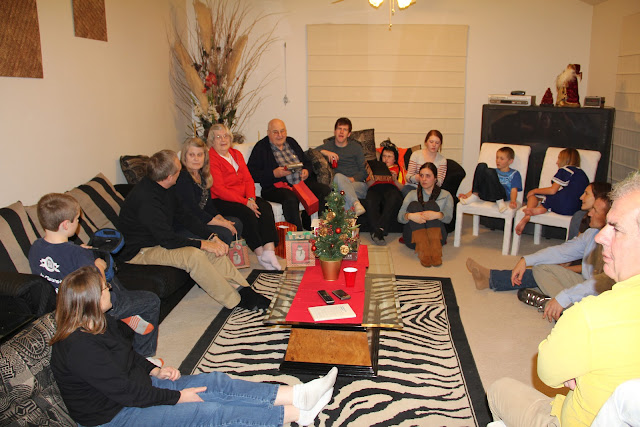 The Emmetts were put in charge of music so Sarah and I played various carols for everyone to sing along with. Most touching was when "Once in David's Royal City" was proposed and the five Tueller daughters all selected a reluctant Grandpa Tueller to sing the first verse as a solo. He has a beautiful tenor voice which started out shaky (just like the boy sopranos do from King's College in Cambridge England) but then progressed in such simple beauty that it brought his daughters to tears. Back at our house we lit the fifth advent candle and read the Christmas story from Luke and Matthew. Then unannounced and unplanned, Will started playing his Christmas recital piece--"Away in a Manger"--on the piano (hear it a few blog posts back). We all started to sing along to the simple melody, centered on middle C, that he was playing. He then pulled out his piano book (he started piano lessons in September) and started playing other songs he had practiced during the month-- Silent Night, We Three Kings, Jolly Old St. Nicholas, Jingle Bells and we all sang along with the candle lights burning. A great Christmas memory made. 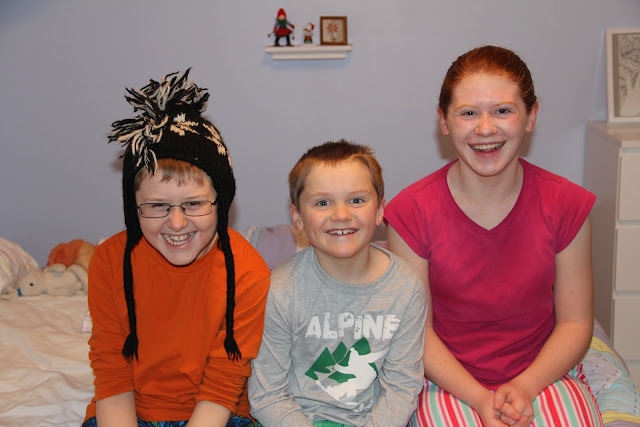 Ready to go up and see what Santa brought at the reasonable hour of 8:00 am. 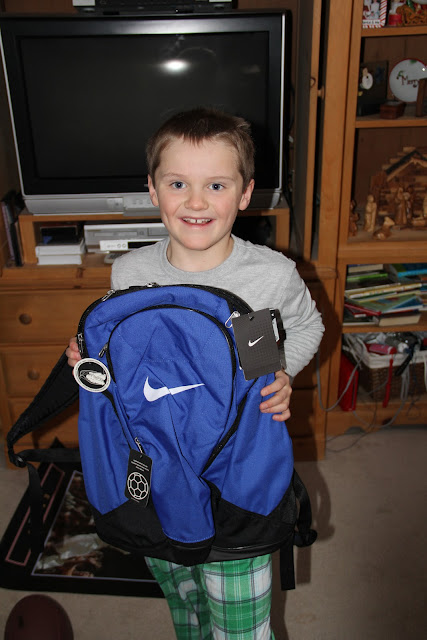 Will got a camera, a Nike back pack for school and soccer (he is really in to name brand sports items) and tons of other stuff. 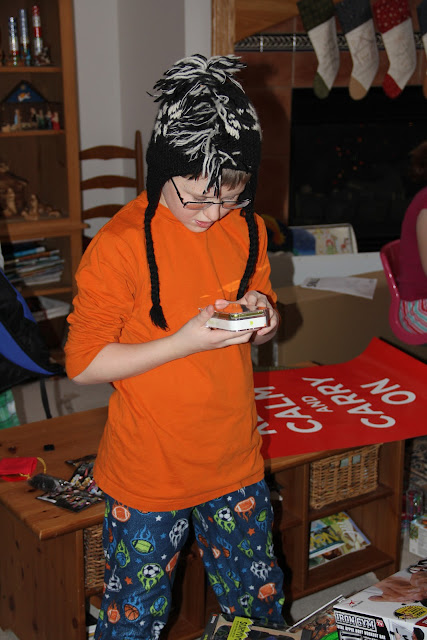 Joel got a new iPod touch. The hat was a gift last year from his cousin Eli who sent it from Nepal. 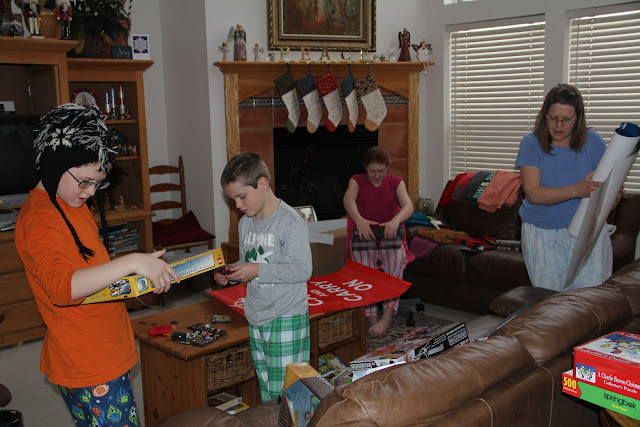 Sarah got a new desk and pink chair (courtesy of Santa and Ikea). Santa did not take the time in the middle of the night to put it together so dad got to do it one afternoon a few days later. 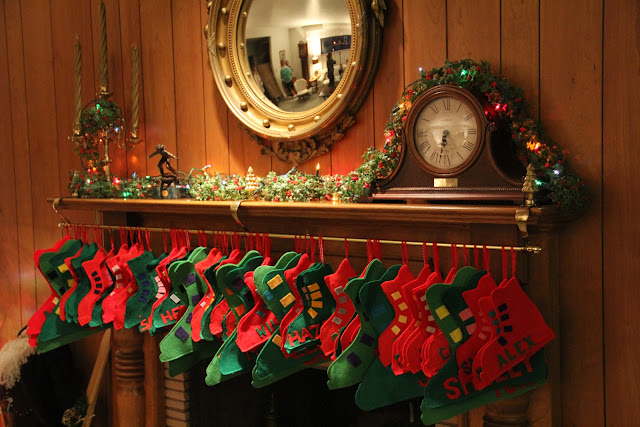 Christmas afternoon we drove to Grandma Emmetts in Logan. Years ago she and Grandpa Emmett started a tradition of hanging ski boot socks for each child.With each new addition to the family (spouses, grandchildren and great-grand-children) a new ski boot is hung. This year with the addition of three grandchildren the number of socks rose to 70. 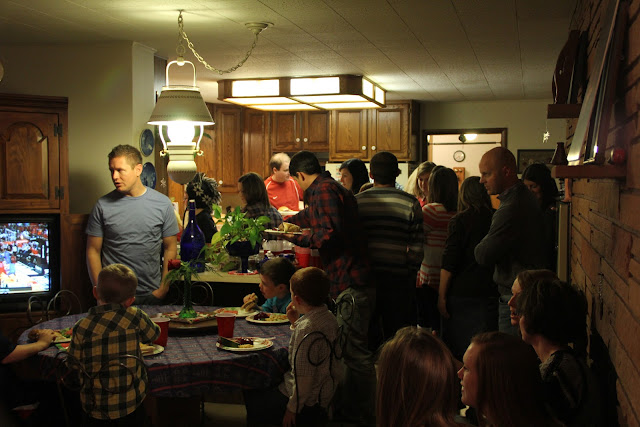 Most all of those 70 crowded into the "twin pine" house for dinner. 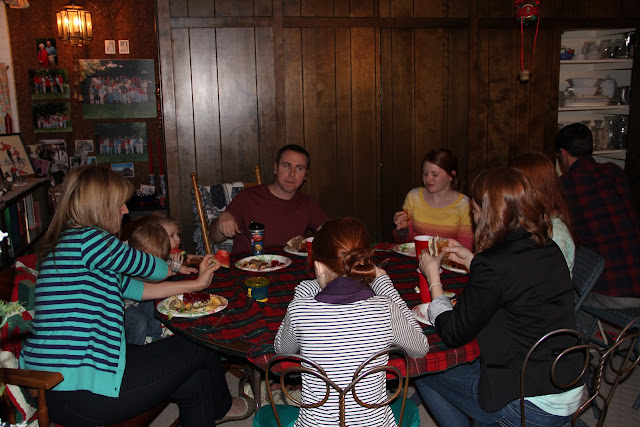 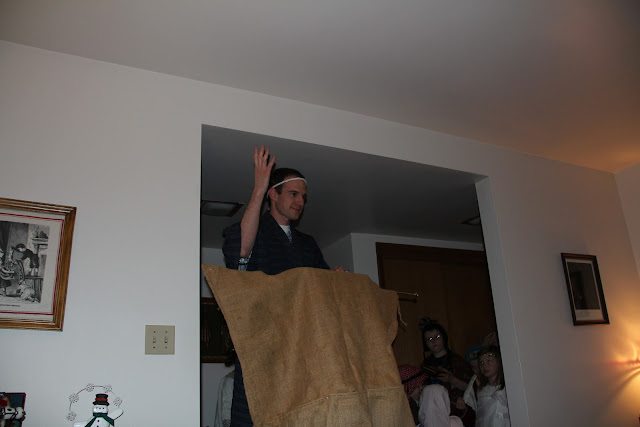 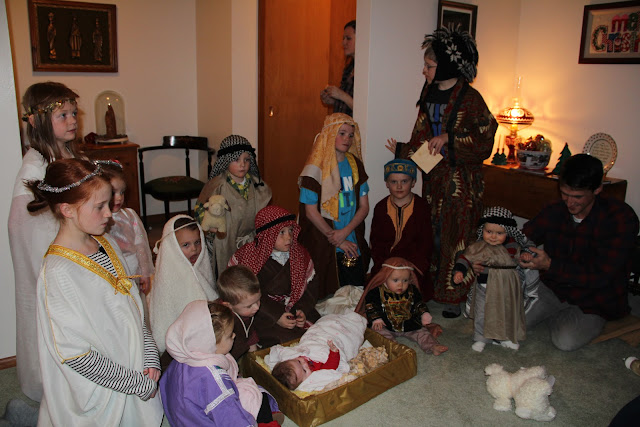 The last of the grandchildren and the beginning of the great-grandchildren reenact the Christmas story. Baby Jesus is Savannah Falslev, the newest member of the clan. Last August her father delivered her breech in a car on the side of the road in Smithfield. 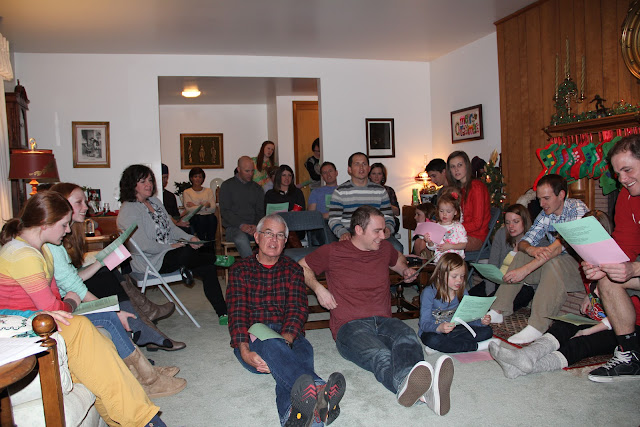 Community singing including our own version of "There's no place like home for the holidays" with specialized lyrics changed each year.


Oh, there's no place like home for the holidays
'Cause no matter how far away you roam
When you pine for the sunshine of a friendly gaze
For the holidays you can't beat home, sweet home

We gather each year at the twin pine ranch
To eat some aebelskivers
Sing some songs and do some skiing at the Beav
We welcome Hazel Sue and Henry and Savannah to the clan
From the mid west, west coast, Wasatch Front
We gather all together.

Oh, there's no place like home for the holidays
'Cause no matter how far away you roam
If you want to be happy in a million ways
For the holidays you can't beat home, sweet home 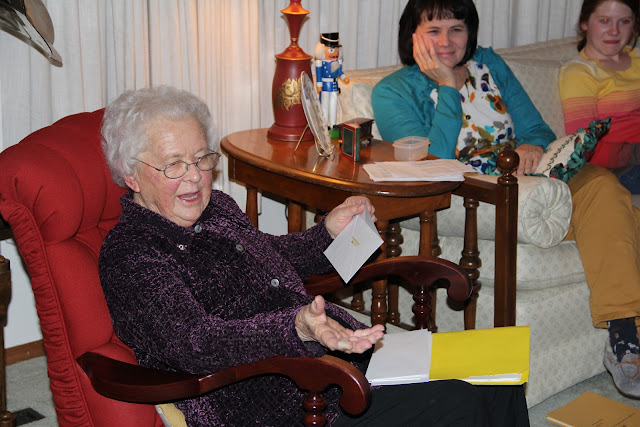 Grandma Emmett announcing that her gift to the family was a large donation to the Jaredita Foundation which helps pay school fess for needy children in Indonesia. 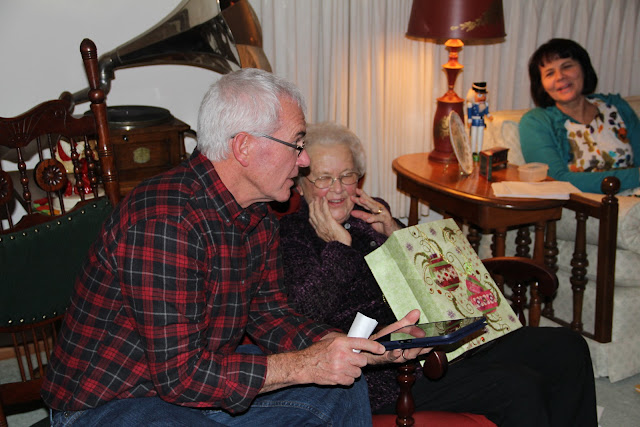 Bill explaining to Grandma about her gift--a Kindle for reading and viewing family photos posted on Instagram. Next day many Emmetts enjoyed a snowy day of skiing at Beaver Mountain. Sarah then joined with many of her cousins and Grandma Emmett at a showing of Les Miserables. It was slow snowy drive back to Springville later that night. For part of the drive through Sardine Canyon Sarah kept us entertained with tales and observations from the movie 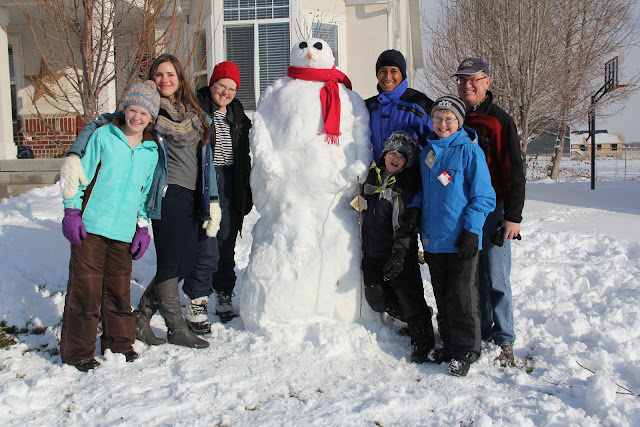 As her gift to the Emmetts, Aunt Diane and Uncle Lant (visiting from India) treated us to two fun games of Laser Tag followed by a filling lunch at Texas Roadhouse. We brought along Ezra Subandriyo who is visiting Utah (where he served his mission) on break from BYU-Hawaii. He joined in the fun of building a snowman followed by a snowball fight at Grandma and Grandpa Tueller's. 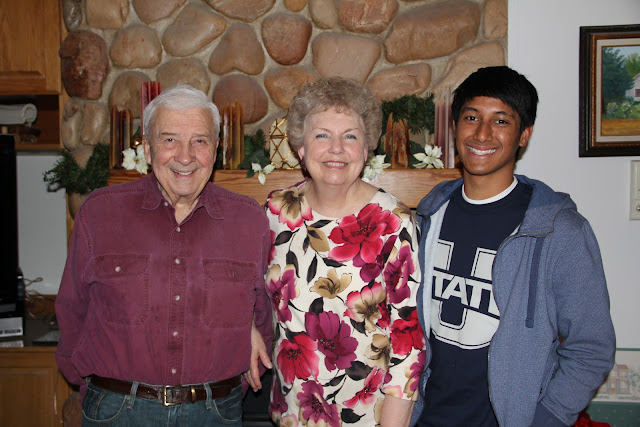 I then took Ezra to visit Vern and Carolyn Tueller (he is Grandpa Tueller's second cousin) who presided over the Indonesia Jakarta mission over a decade ago.
Posted by chad at 9:55 PM