Today was to have been a day of sunny and warm skiing at Brighton where we would escape the murky haze and below freezing temperatures of a long lasting inversion down in the valleys. Unfortunately, it was not to be. The last few days all three kids have been sick, Joel and Will with intestinal upheavals and Sarah with a high temperatures and an achy body (the Dr. today diagnosed it as the flu). While wanting to think that my climatic misery is really misery, I was reminded from Facebook photos and comments that friends in Indonesia are suffering in much greater ways. The annual January floods (banjir) are particularly bad this year.The Jakarta Globe photos and map below are of the recent flooding in Jakarta.  read more here 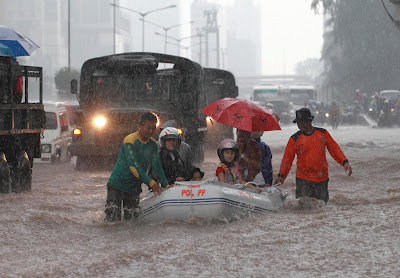 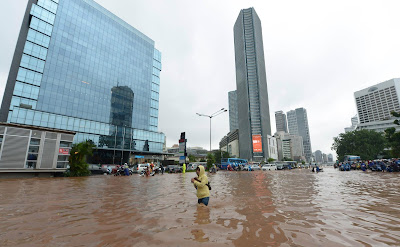 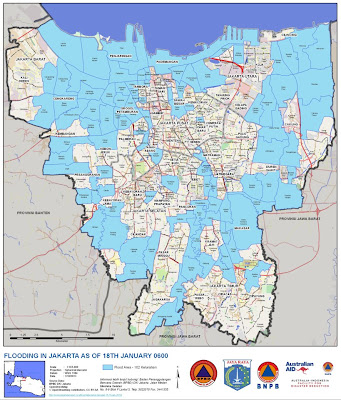 Seeing the photos brought back memories of my two flood seasons in Indonesia. I have written up one of those experiences for inclusion in my current book writing project on the history of the LDS Church in Indonesia. It goes as follows:


"I arrived in Indonesia in November of 1975 at the start of the rainy season. Some of the first words added to my limited LTM (Language Training Mission) vocabulary were very experiential: hujan deras (raining cats and dogs), payung (umbrella), bocor (leak in the roof) and bajir (flood). Initially the rains were mostly short lived afternoon thunderstorms, but by January they had morphed into what seemed like endless rain. Flat Semarang was no match for these rains and even the Dutch-built canals (now clogged with garbage, refuse and water lilies) could not channel the rains out to sea fast enough. For several weeks floods carpeted much of the city. This necessitated fancy maneuvers on the bikes: positioning the umbrella at just the right angle to keep at least the upper torso partly dry, dodging or riding out the big wakes created by passing trucks and buses, half peddling in an attempt to keep shoes dry (it didn’t work), and trying to determine in the sea of water where pavement ended and canals began.

"Elder Skousen was my companion. He was the sole missionary with a five-speed bike. The rest of us peddled one-speed, fat-tired, Phoenix brand green or black Chinese knock-offs. On Friday January 23rd Elder Skousen and I rode our bikes to an evening appointment with the Machsunun family in Kampung Sekayu Baru—just off the expansive tree lined main road called Jalan (Street) Pemuda. We entered the kampung (neighborhood) on dry walkways, but just as we arrived at the house it started to pour. It was then that we found out that the parents were at the hospital with a son who had been hurt in a motorcycle accident and so we were unable to teach a discussion. We thought to move on to our next appointment but decided it best to wait out the storm. After about an hour the rains did stop and so we decided to move on. As we walked out of the home into the yard we were greeted by a banjir of over a foot of water. I placed my bag with flip chart, scriptures and a film strip projector on the back book rack and rolled my bike out to the three foot wide walkway (gang) and prepared to ride off. As with most neighborhoods in Semarang, where sewage systems had not yet been installed, the gang was paralleled on both sides by dirt lined ditches that carried off both rain and refuse. However, under the rising waters these ditches were rendered useless and were no longer visible. I took the lead and climbed on my bike and started to peddle, but the cobblestones and flood waters threw me off balance. To keep from tipping over I put my right leg down. Down it went, but not onto the firm foundation of the walkway but into the muddy depths of the ditch which pitched me even more to the right. I quickly grabbed for a split bamboo fence to regain my balance but it collapsed with me into the waters. I went in up to my chest before regaining my stance. Luckily the projector was in a plastic bag and thus remained floating long enough for me to snatch it up. It was all quite entertaining to the members of the Machsunun family who were used to the annual floods.

'Realizing the futility of trying to ride our bikes out to safer cycling on Jalan Pemuda we started to walk our bikes through the water. I turned the corner from one gang to the next with Elder Skousen following behind. As he turned the corner he misjudged the width of the walkway and misstepped into an even deeper ditch hiding beneath the flood water. I heard a gasp and turned around in time to see Elder Skousen up to his waist in water. His ditch was deeper and muddier than mine. As he pulled his foot out I could hear the sucking sound of the mud trying to hold on to his shoe. The smell of the displaced sewage turned Elder Skousen’s face white. He knew what lurked down below and exclaimed that we had to get home quick. Once we reached Jalan Pemuda, five-speed Skousen set off at a record pace with one-speed Emmett lagging far behind. By the time I got back to the church/missionary apartment at Jalan Pekunden Timur, Elder Skousen was already enjoying the cleansing pleasure of a dipper bath (mandi). "

No photos were taken that night, but a few days later I took along my Pentax camera filled with Kodachrome film  to document the flooding. 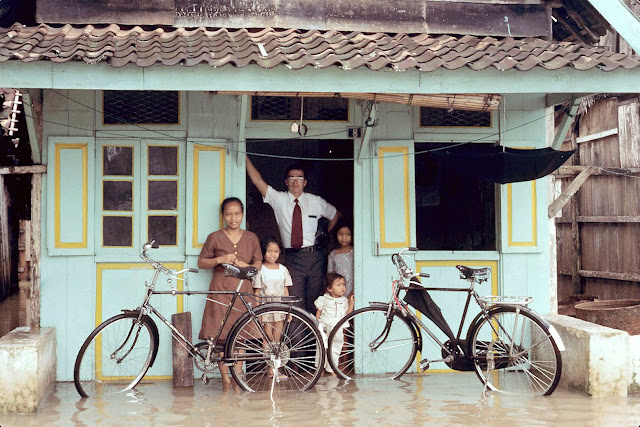 Here is Elder John Skousen with recently baptized Sister Suriyana and her three youngest daughters in front of their almost flooded home. Elder Skousen's five speed bike is on the left. My one speed bike with umbrella is on the right. 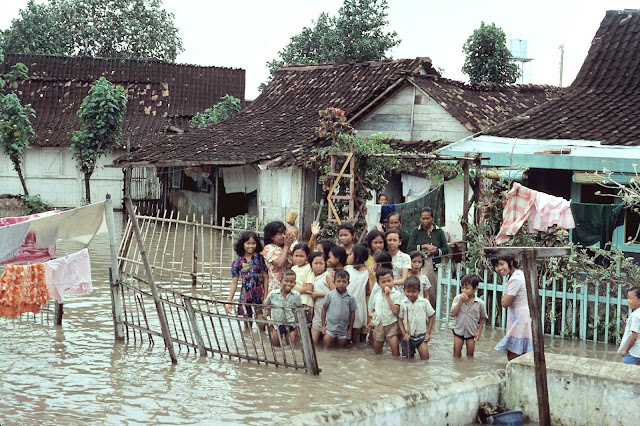 Here is the view from the front door of the Suriyana home--which was the highest home on the street. Most homes were inundated with at least a foot of water. I remembering reading in the newspaper that January about a woman in a similar flooded  neighborhood of Semarang who put her baby on a bed to nap and while she was in the next room cooking, the child rolled off the bed and drowned in the flood water. The people above are standing on the cement walkway between the two ditches that carried away the sewage. Good thing we had our cholera shots. The bamboo fence is similar to the one I took down with me during my tumble a few nights earlier. 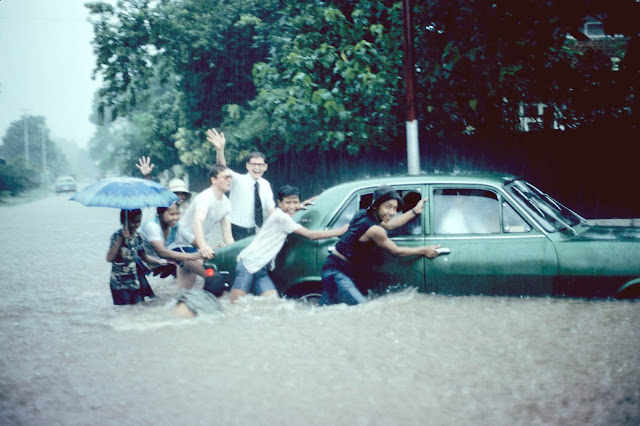 The next January I was serving in Jakarta with my companion Elder Hardjiono (Charles) Tjan--one of the first local missionaries called to serve. One rainy/flooding morning we took the mission car (a small Toyota sedan) out on mission office business. We were able to circumvent the heavily flooded areas for most of our travels. It wasn't until we were just a few streets from the mission office that we met our match in this deeper than perceived intersection. I was driving and it looked no deeper than other roads we had traversed. But half way through the intersection, the deepening waters started to flow into the car through the car doors. The floor of the car started to fill up with water and then the engine stalled. Some helpful young men out enjoying some water fun volunteered to help us push the car back to the mission office. I then returned to the flooded intersection with Elders Sellers (who took the above photo) and Rigby (in the white t-shirt--he had been doing his midday exercising) to take some photos. I am happily waving as we helped the boys push a few other stalled cars on to higher ground. Notice the torso of the one boy who took a tumble into the water.