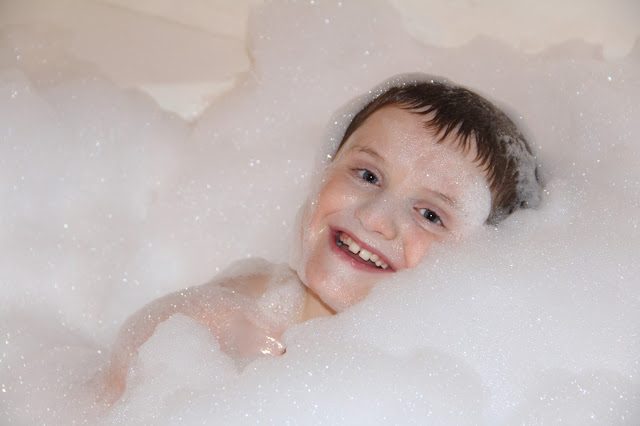 It has been a cold January with a long yucky inversion. That hasn't kept us from being anxiously engaged in good things. This past week Will rediscovered the joys of bubble baths. 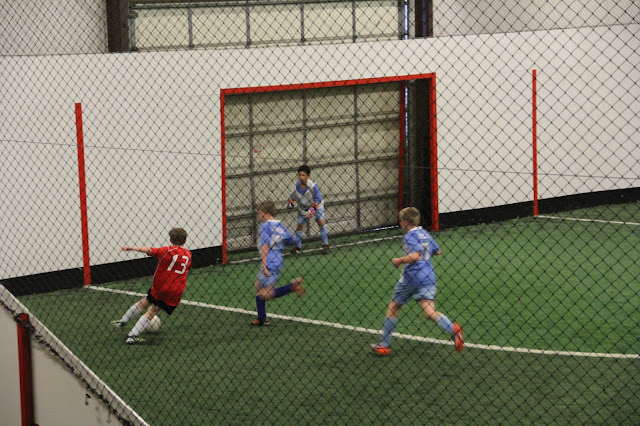 On Saturdays when he is not skiing, Joel (#13) continues to be the leading scorer for his indoor soccer team. 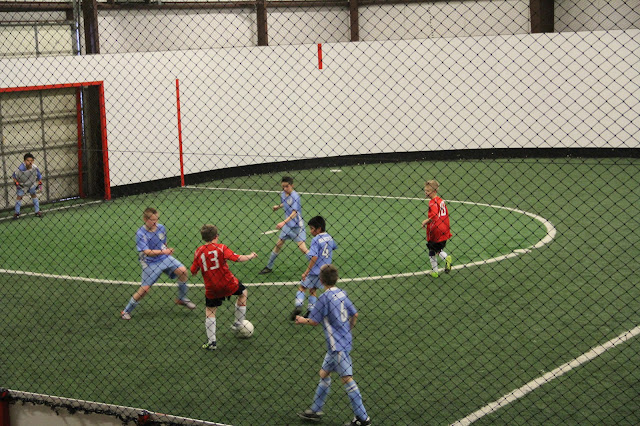 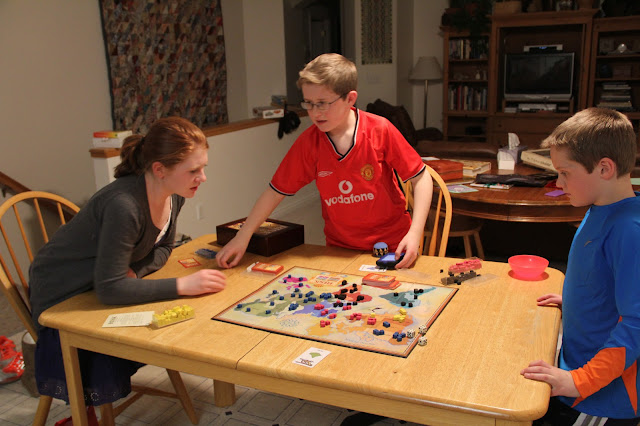 With Church meetings now from 9-12 on Sunday mornings we have enjoyed Sunday afternoon game time. Joel got Risk for Christmas. In this photo dad (yellow cubes) is besieged in the North American Southwest by his non-merciful kids. 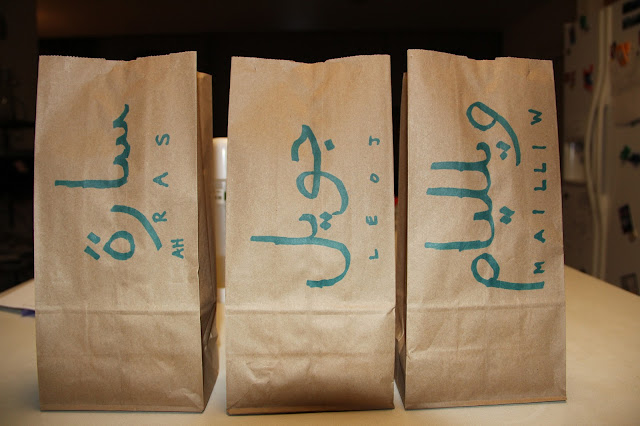 For most of this past week, Marie was down for the count with a bad case of the flu. That left me as chief cook for dinner and morning sack lunch maker. To liven things up I used a different writing style each morning to label their sacks. First day I used balloon lettering that I learned from dad years ago, then shadow block letters that I learned in Mr. Jorgensen's fifth grade class and then finally Arabic that I learned in Arabic class at BYU. 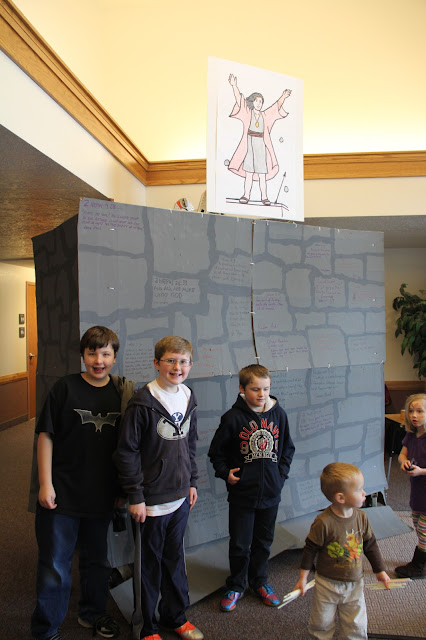 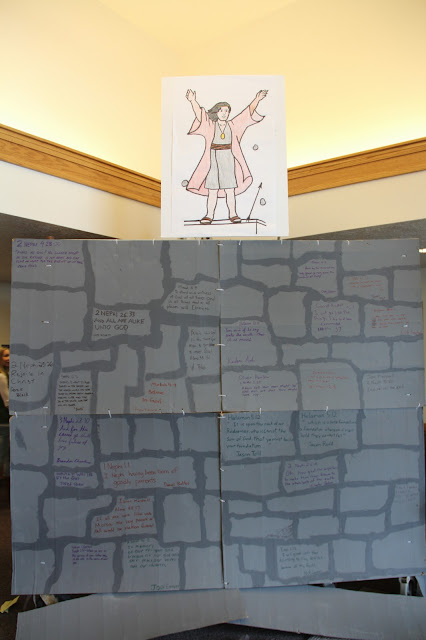 The stones on the wall were decorated with favorite Book of Mormon scriptures for all of the young men and their leaders. Will joined in to help on Wednesday night (when Marie was sick) so he also got to add one of his favorites (that we read prior to his baptism). 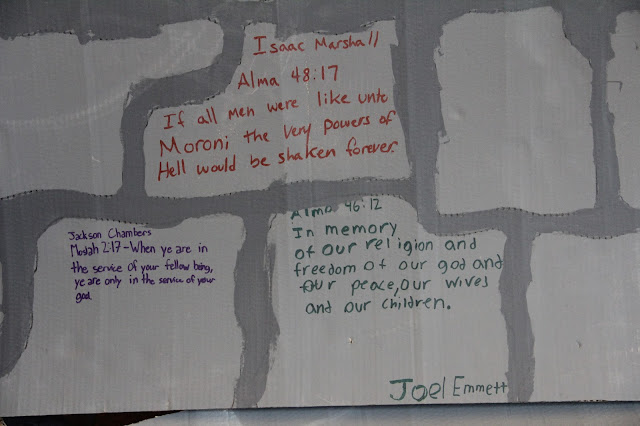 Joel's favorite scripture from the Title of Liberty. 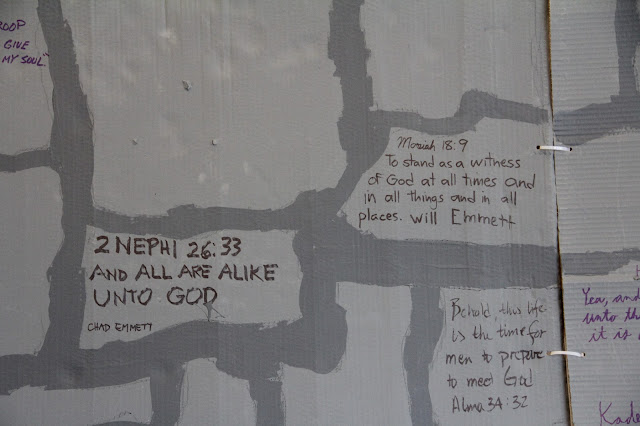 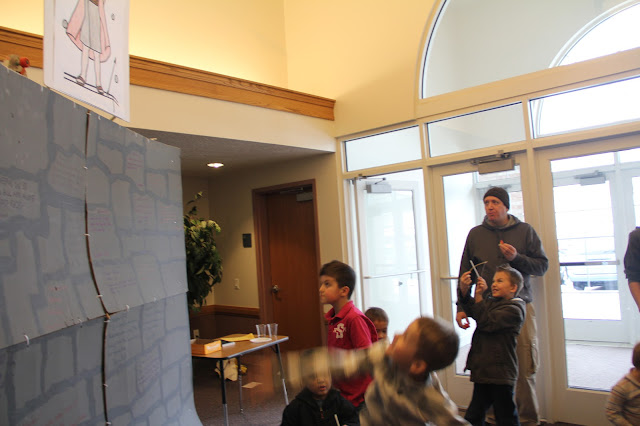 We made small bows and straw arrows for the children to try and shoot at Samuel. We had thought, but didn't, to have plexy glass in front of Samauel to deflect the arrows and stones (to make it true to the story) but instead every child tried to skewer the prophet! Oops. 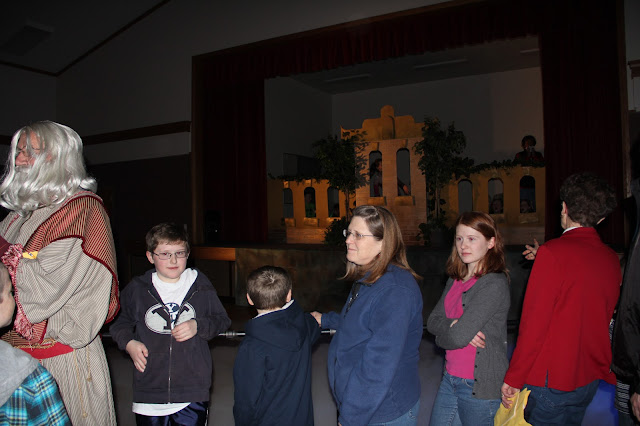 The big hit was a reenactment of Lehi's Dream in which believers hold to the iron rod (the word of God) while being tempted and tormented by unbelievers in a "great and spacious' building" across the mist of darkness. read the dream by clicking here 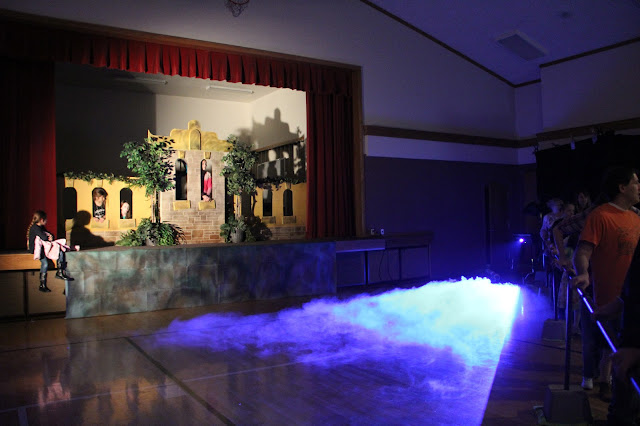 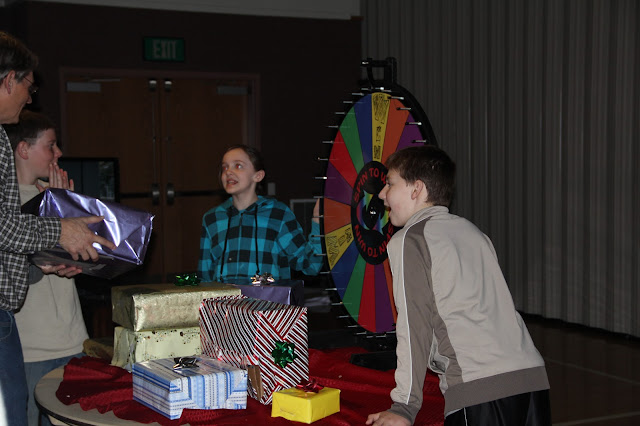 While traversing the "strait and narrow path" and while holding on to the iron rod, we were further tempted by offers to sit on a couch and play X-box games, gamble for prizes and eat tempting treats (which we were later told were full of salt and pepper). 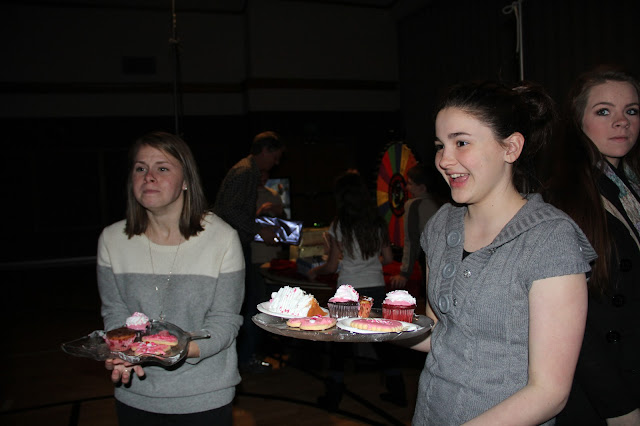 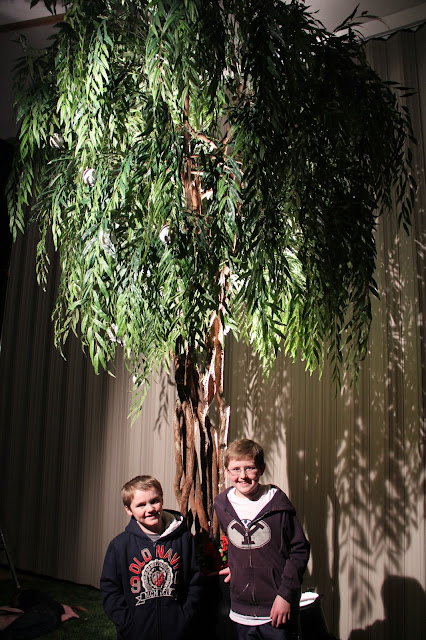 Eventually we made it to the Tree of Life (the love of God)  "whose fruit was desirable to make one happy." 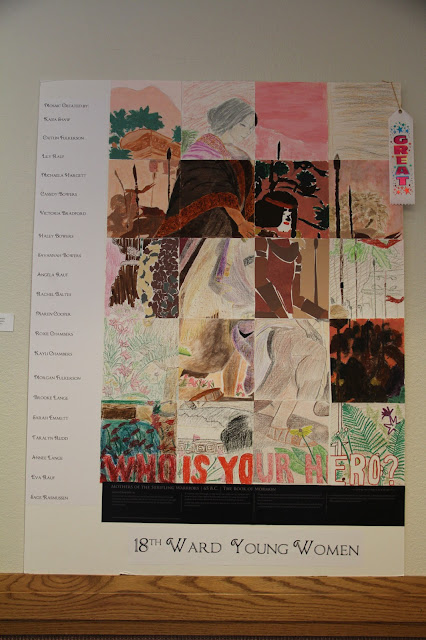 Sarah and all of the Young Women in the ward made a pieced block replica of a poster of the Mother's of the Stripling Warriors. Sarah's block is first left column second up from the bottom.

47 Now they never had fought, yet they did not fear death; and they did think more upon the aliberty of their bfathers than they did upon their lives; yea, they had been taught by their cmothers, that if they did not doubt, God would deliver them.
48 And they rehearsed unto me the words of their amothers, saying: We bdo not doubt our mothers knew it. 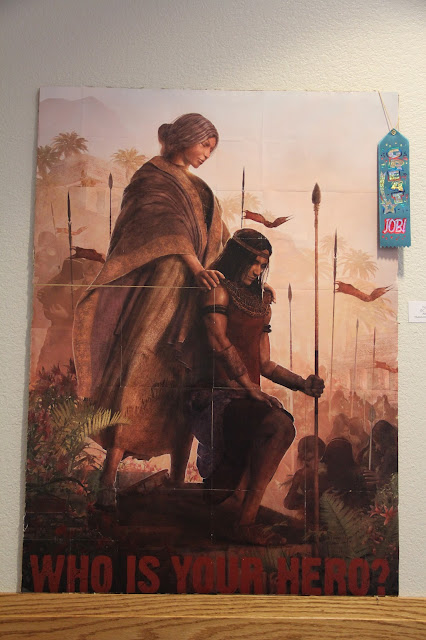 The original poster from a set of scripture heros. 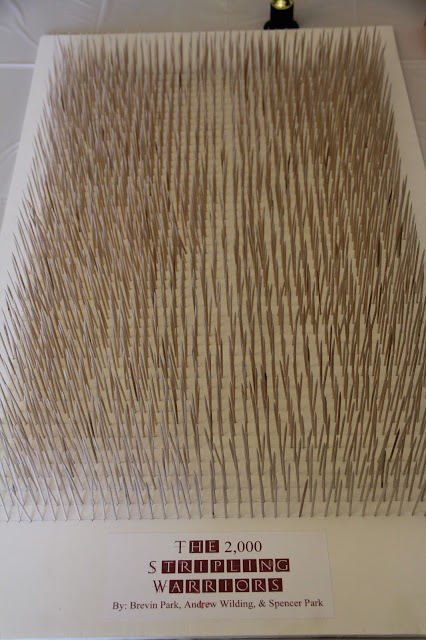 Three boys--one of them a soccer teammate of Will's- stood 2,000 tooth picks in rows to represent the 2,000 young men who were so well taught by their mothers. read the story here 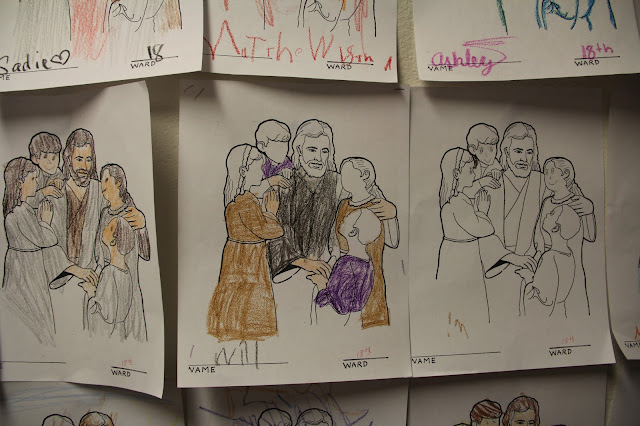 The Primary children in the stake (including Will) all colored a picture of Jesus blessing the children. 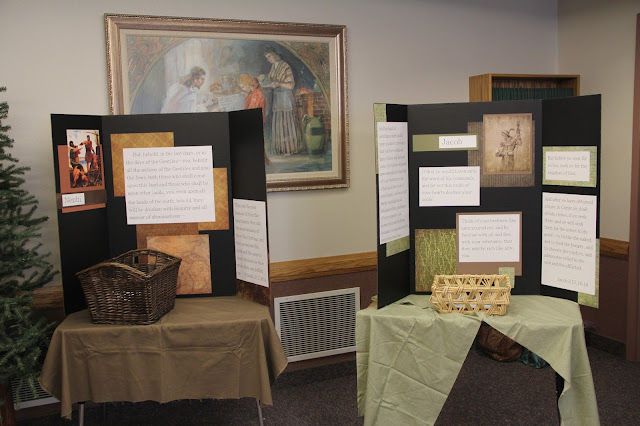 The Stake Relief Society's contribution was to highlight the projects performed each week at the stake's humanitarian work center. Visitors to this display walked around the room filling up a plastic bag with hygiene items (toothpaste, soap, wash cloth etc.) found is baskets in front of wonderful Book of Mormon scriptures teaching us to take care of the poor. and to have charity. The completed hygiene kits will be donated to a local women and children's shelter. 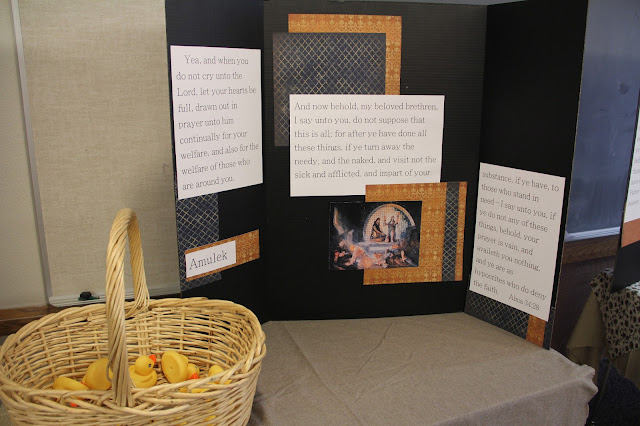 Each kits even included a rubber ducky. 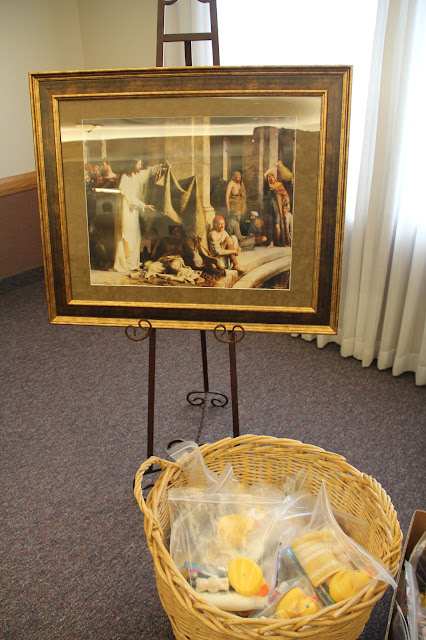 Lovely painting by Carl Bloch of Christ (the ultimate example of charity and compassion) healing a man at the Pool of Bethesda.

It rained (isn't it supposed to snow in January?) all afternoon which happily is clearing out all of the haze and pollution. Joel and Sarah went to watch "The Hobbit" and Will and I went to watch "The Rise of the Guardians"--which was surprisingly good. The plot involves Santa, the Easter Bunny, the tooth fairy, Jack Frost and Mr. Sandman trying to guard and protect children from the evil Boogeyman who wants to turn children's dreams to nightmares.  Believer Will loved it and was full of comments and questions on the car ride home. He even noted that the point of the whole movie was that we need to have hope and believe. Amen
Posted by chad at 9:31 PM