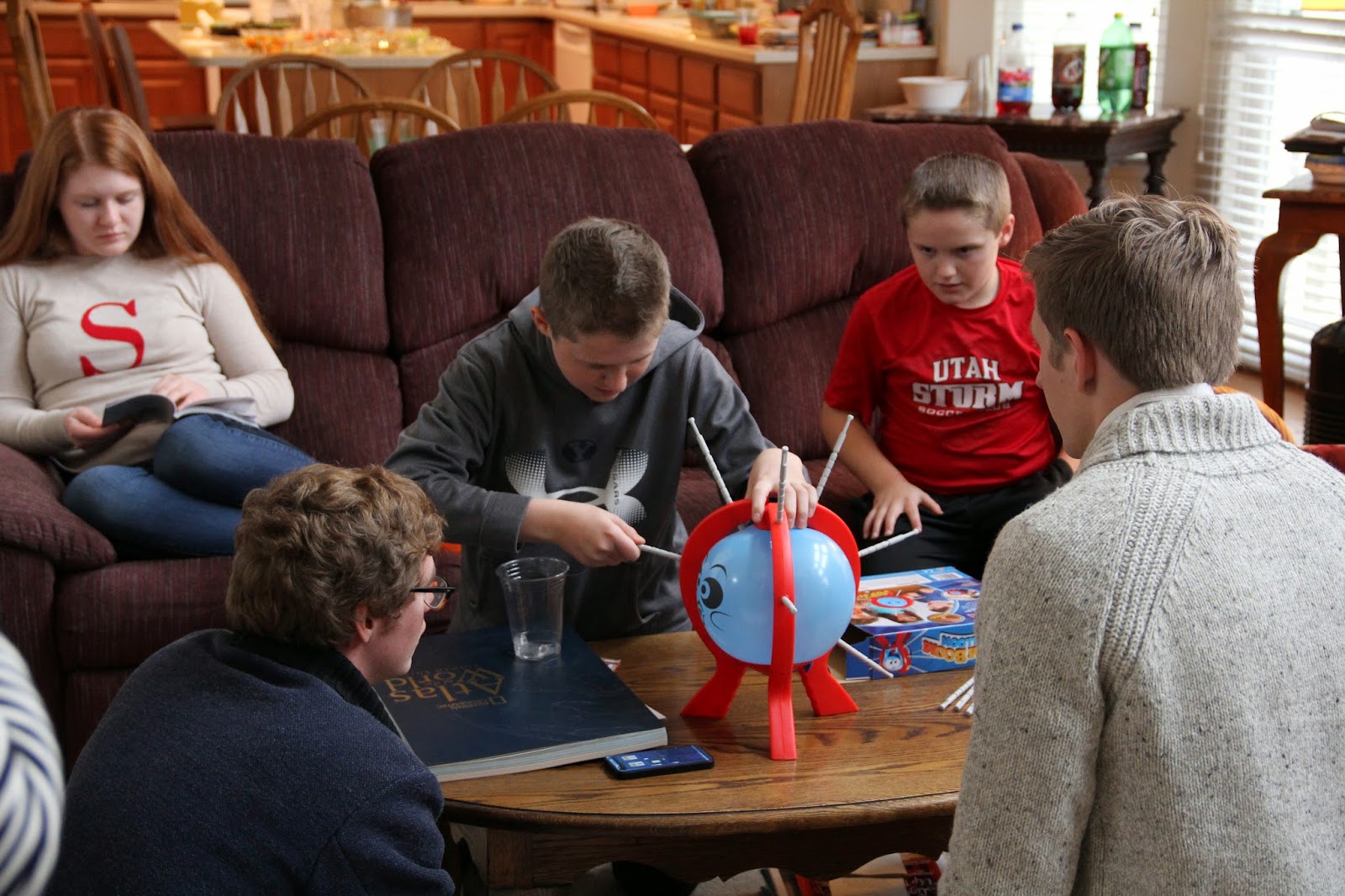 This afternoon most of the Utah members of the Blaine and Jean Marie Tueller clan gathered in Lehi to celebrate Jean Marie's 85th birthday. Surprise guest was her daughter Martha who flew up from Irvine. Daughter Rachel was the DB (Designated Boss) who organized a dinner of chicken curry and rice with lots of "boys" (toppings) to put on top. It was all very delicious. Martha was in charge of after dinner entertainment so she brought a fun game--Boom Boom Balloon--of pushing rods into a balloon until it pops. The four grandson had fun playing it while everyone else waited for the pop. 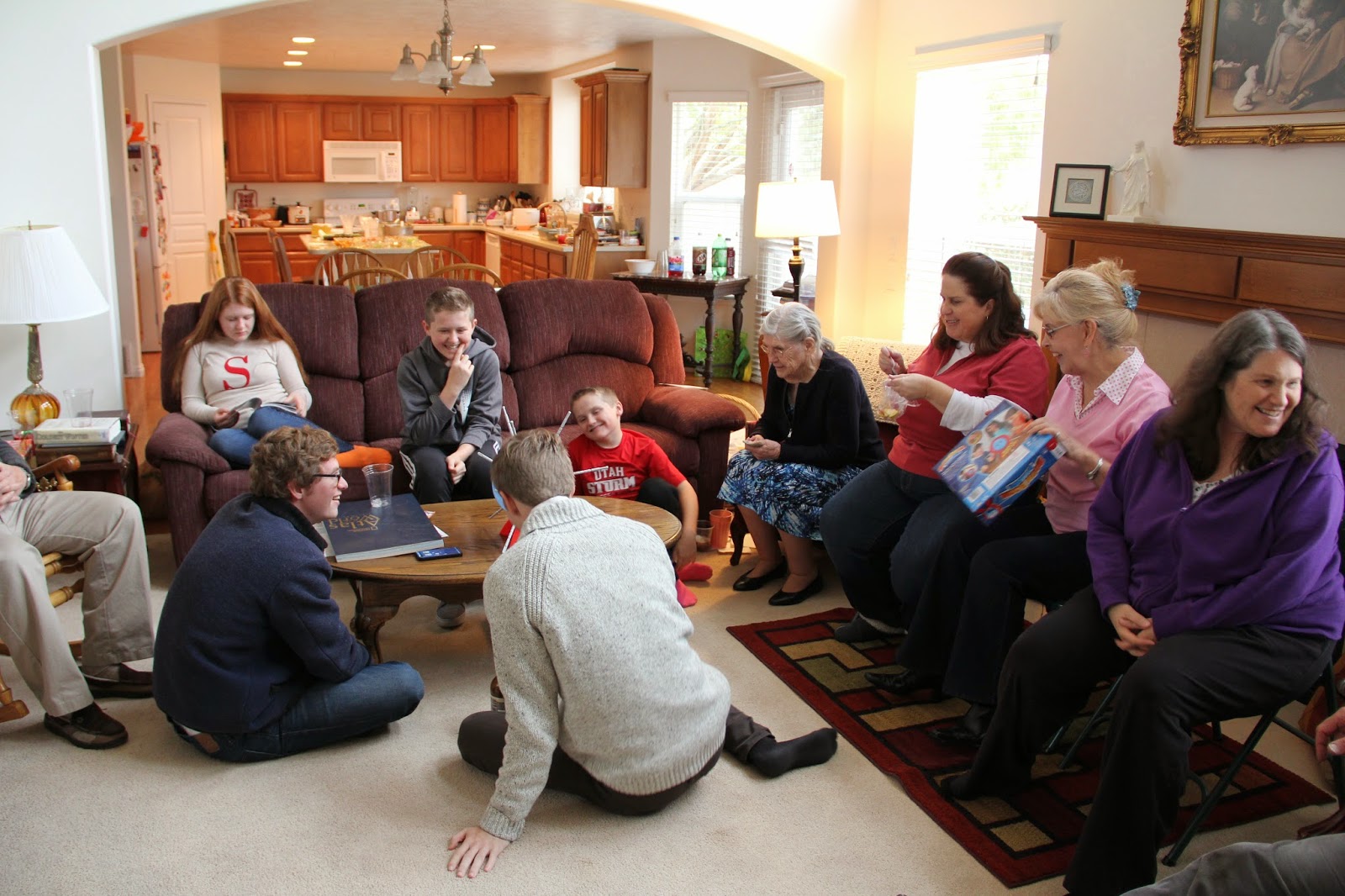 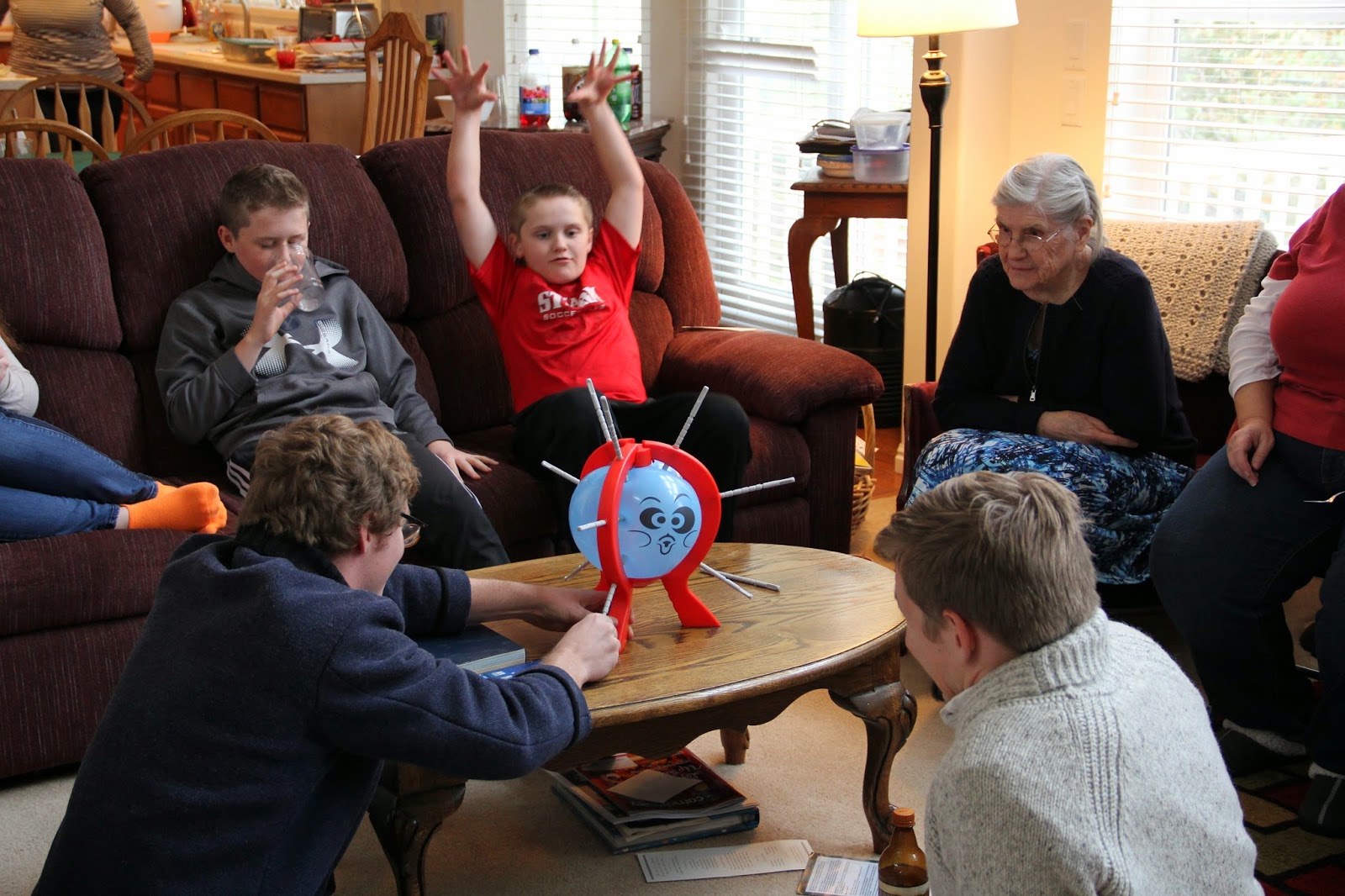 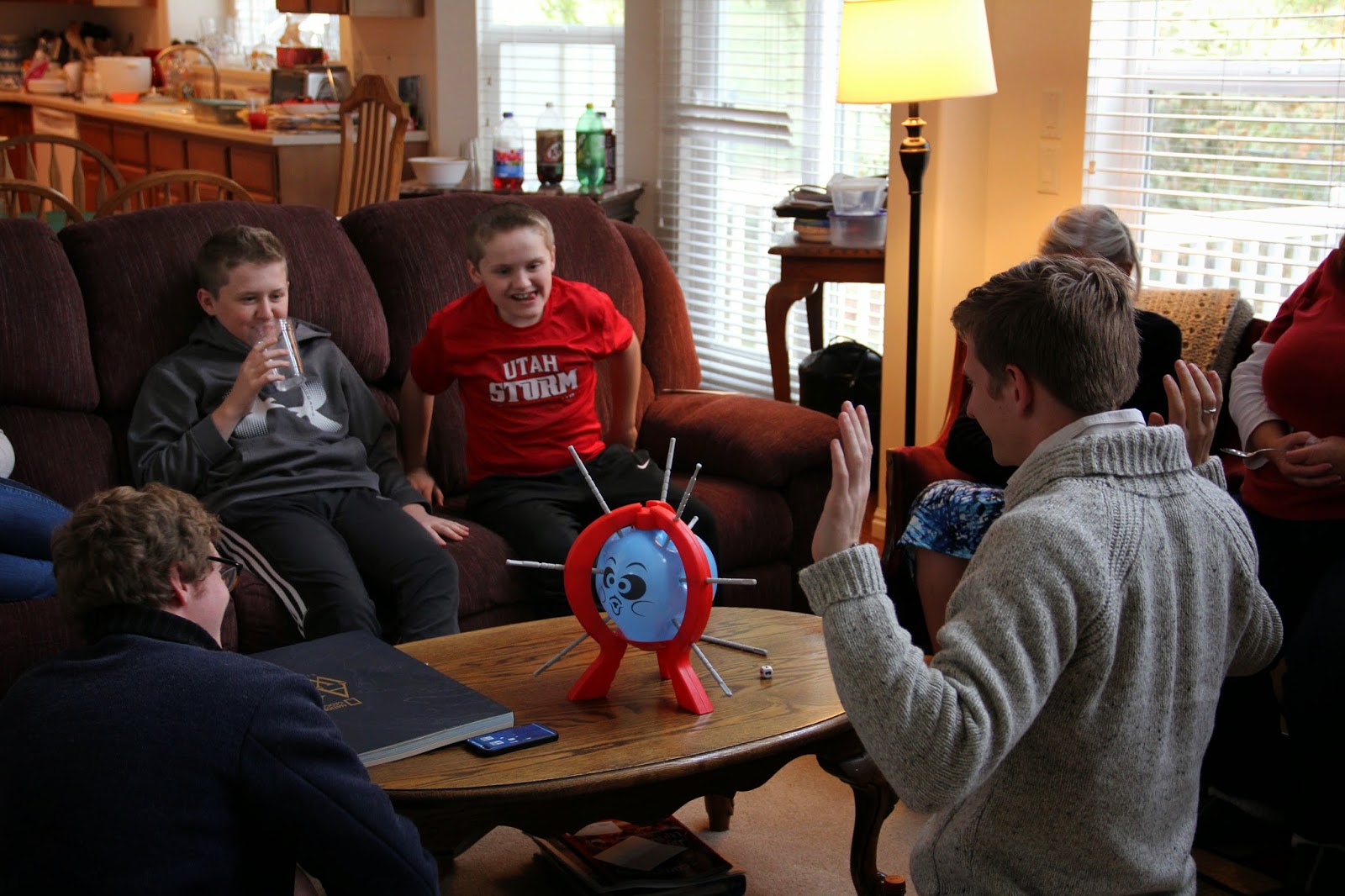 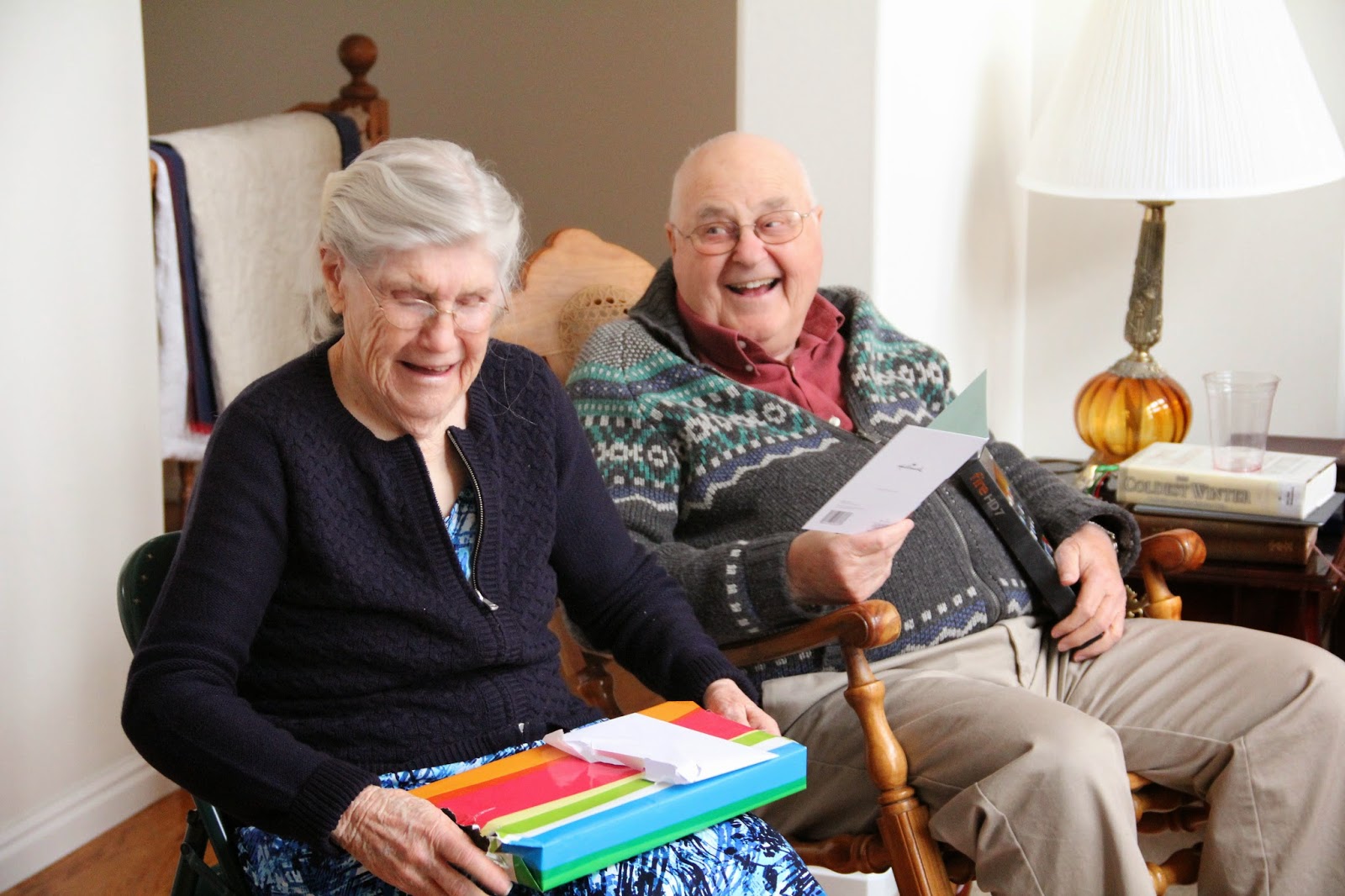 Gifts came next. Grandpa Blaine (with the help of Anna) gave Jean a new kindle fire so that she can not only read books up close and in a large font but so she can also watch TV shows up close. Rachel then came through with an entertaining card and a Wizard of OZ Pez set. 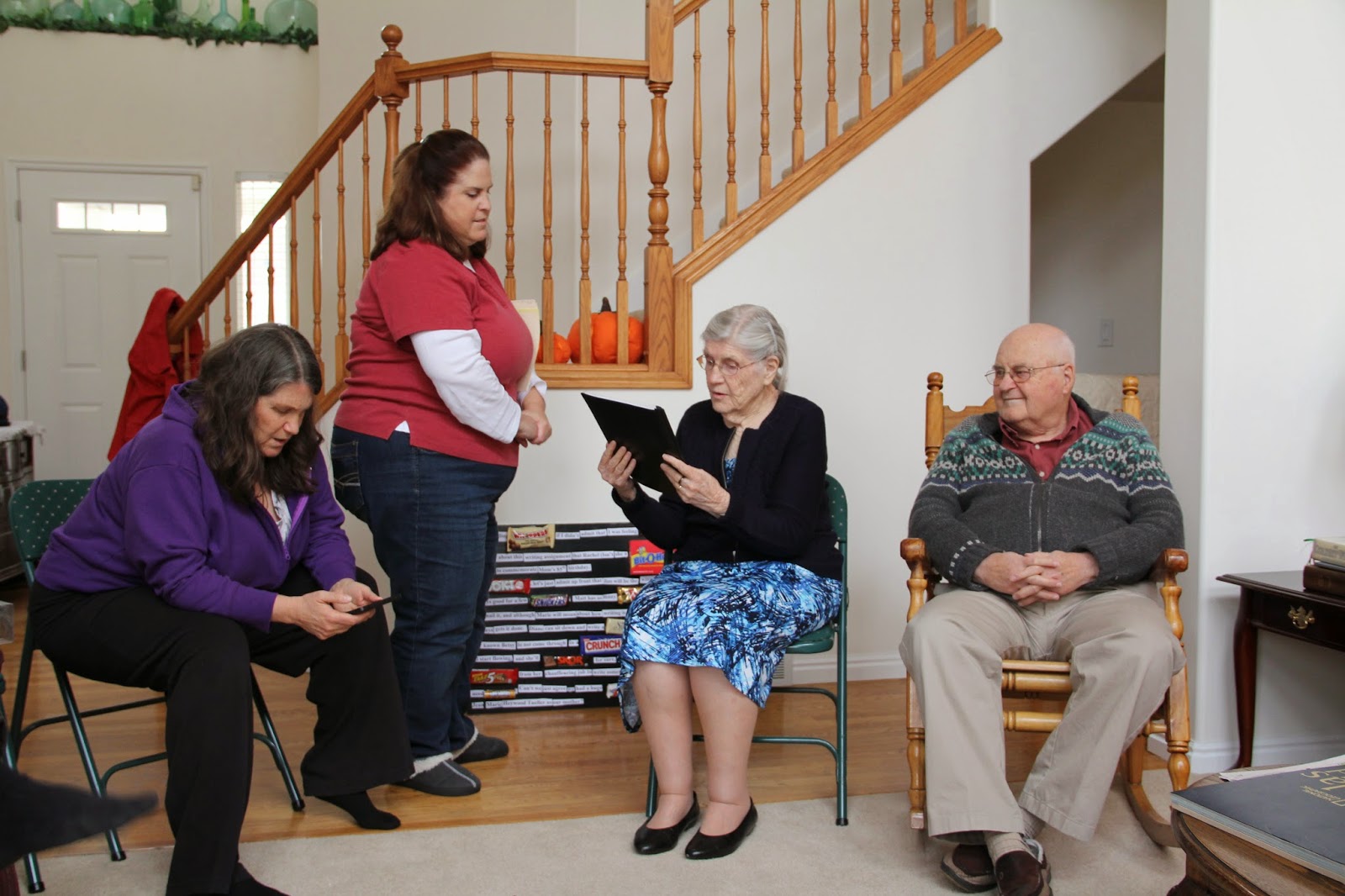 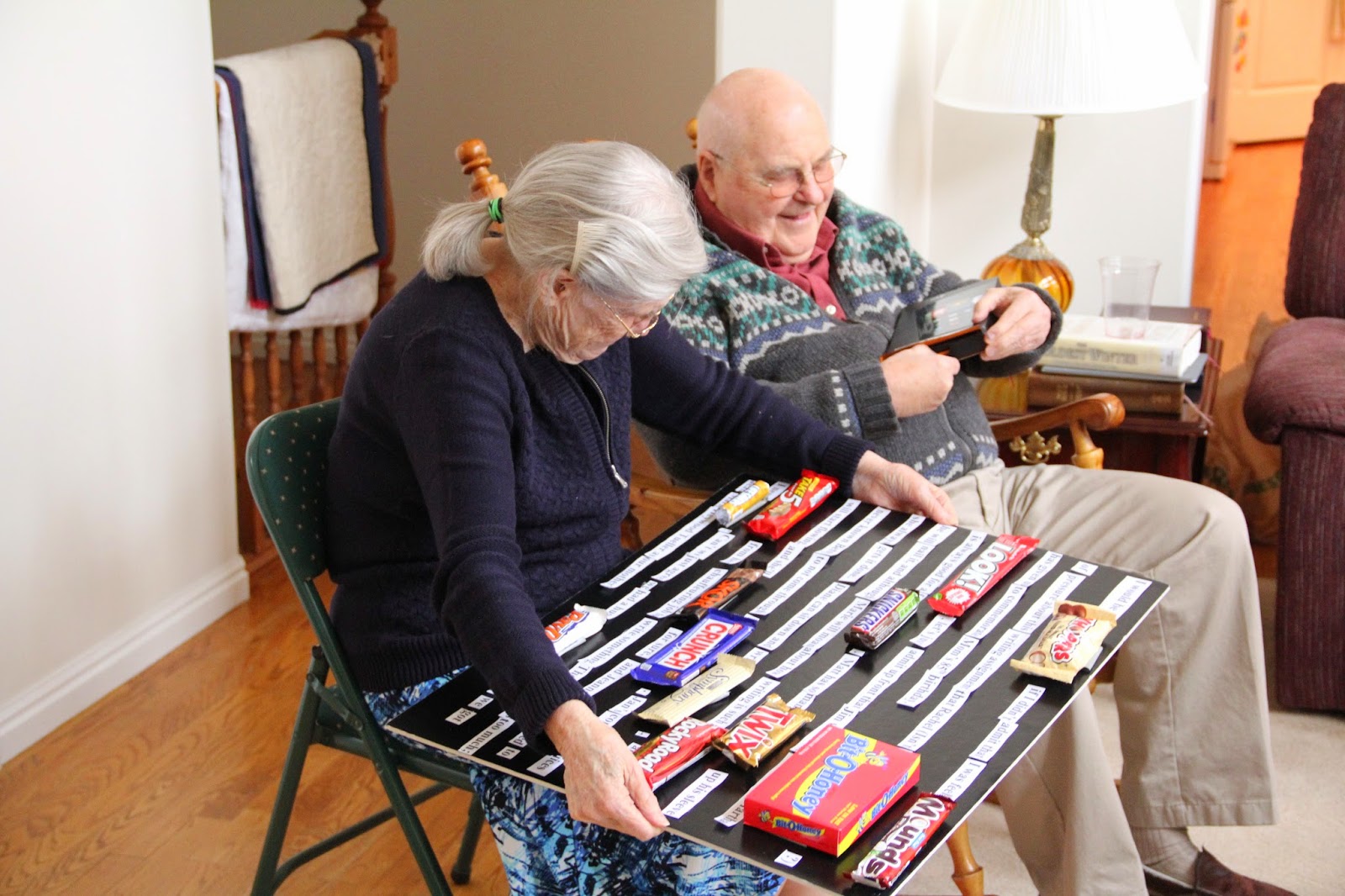 DB Rachel had each of the 10 children send in a gift of writing. Anna's contribution was a humorous candy tale of how each sibling would approach and complete the writing assignment. 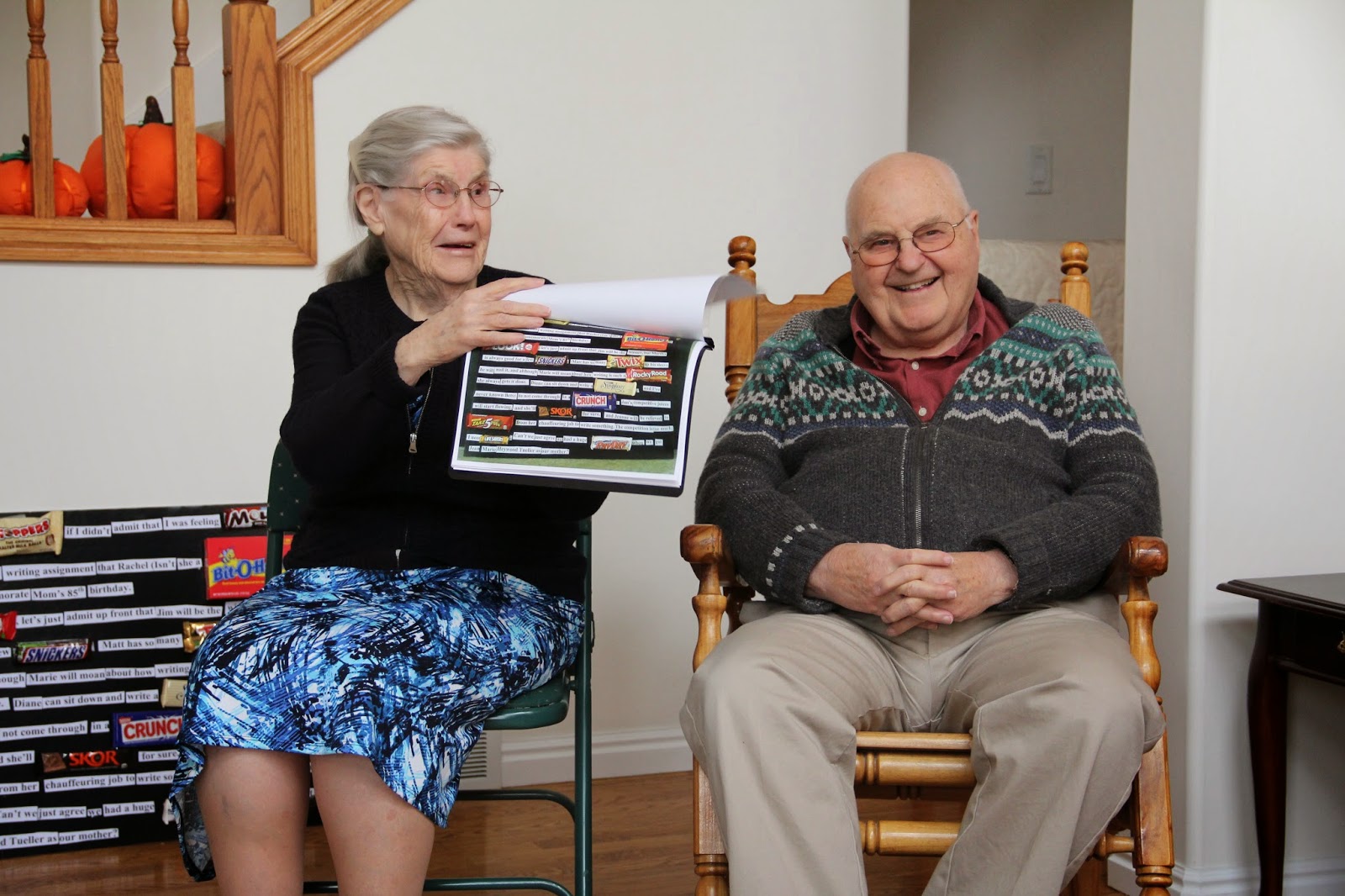 The submissions were all included in a booklet. 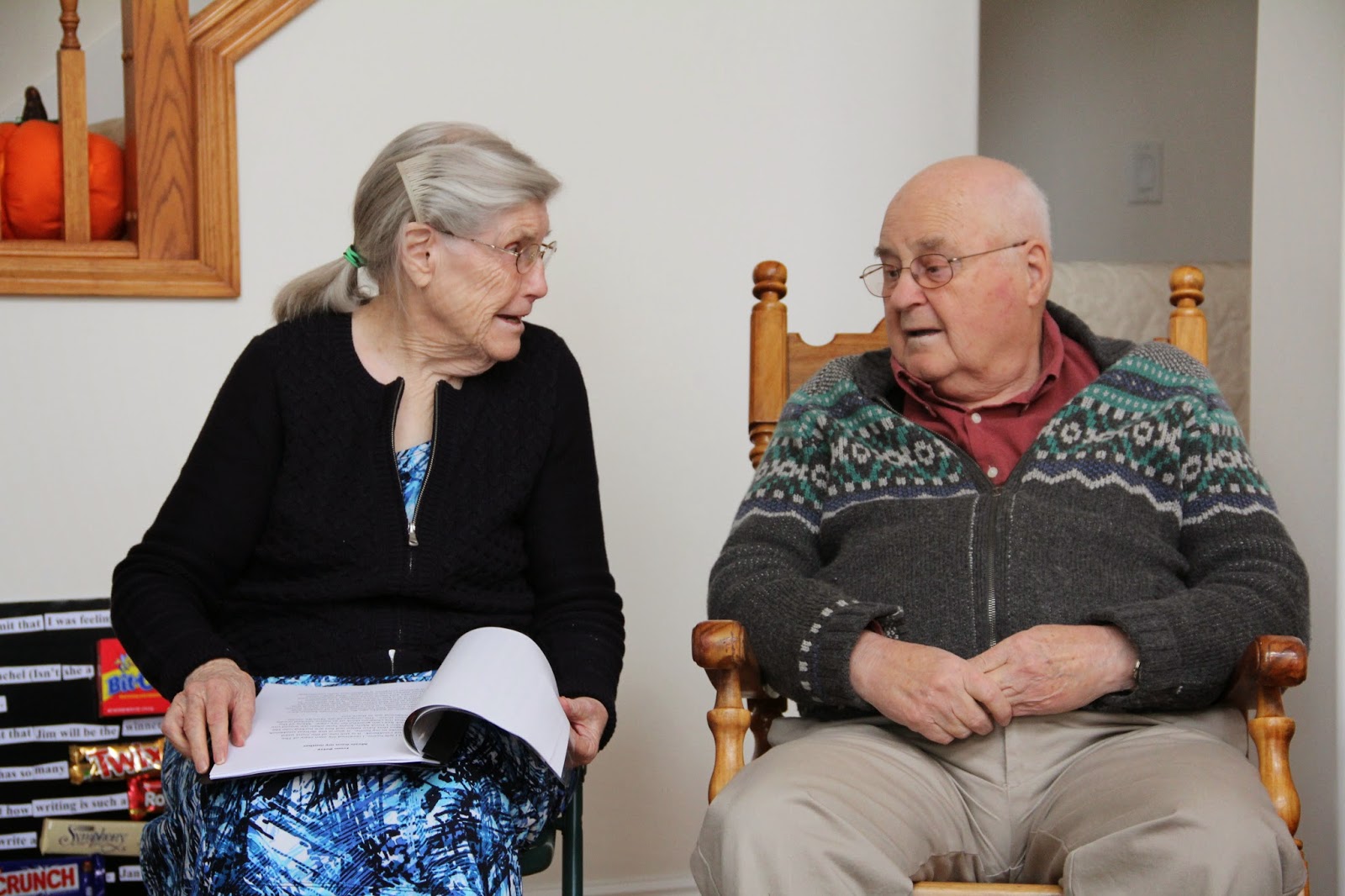 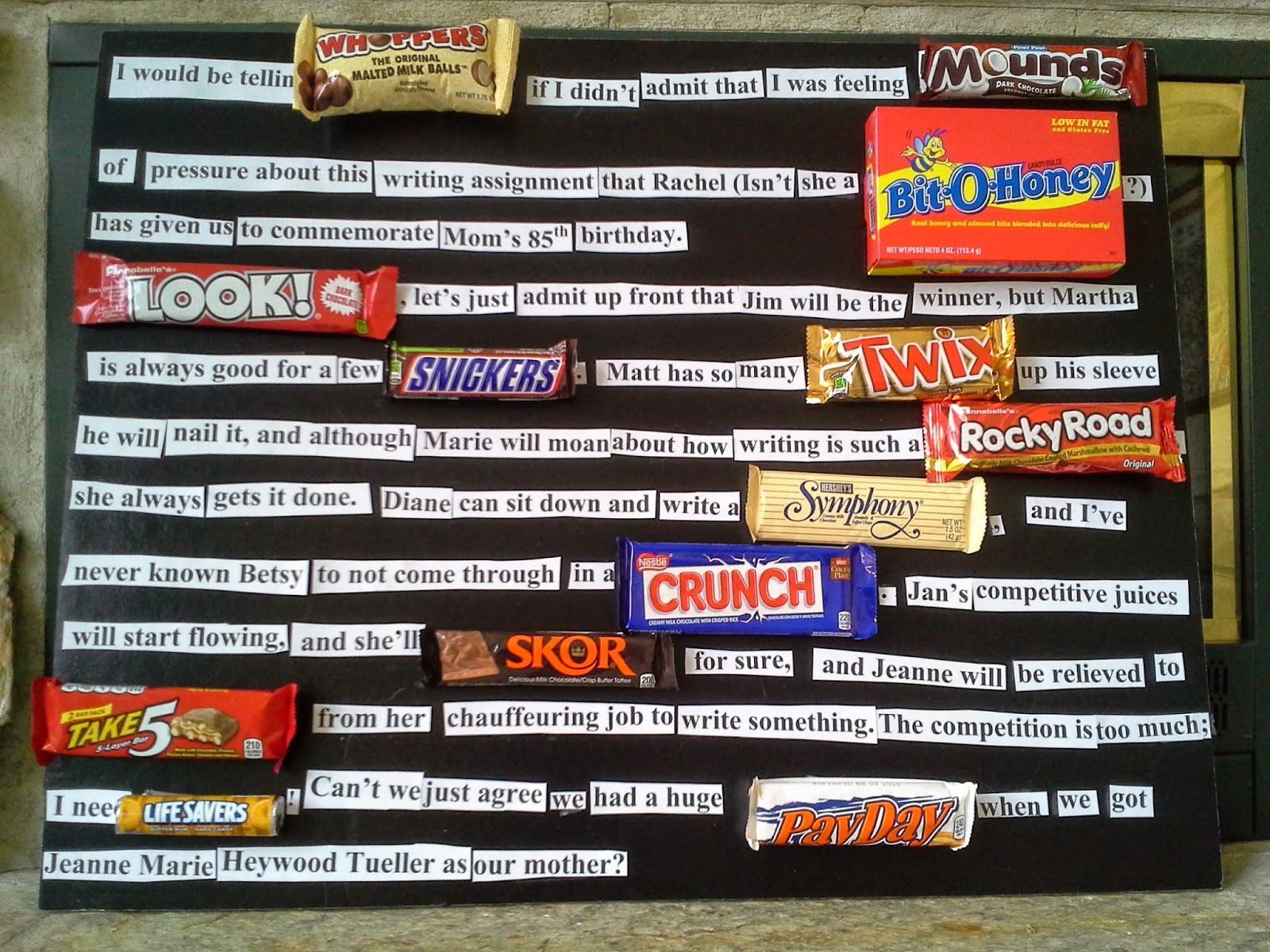 Here is a closeup of Anna's candy tale. 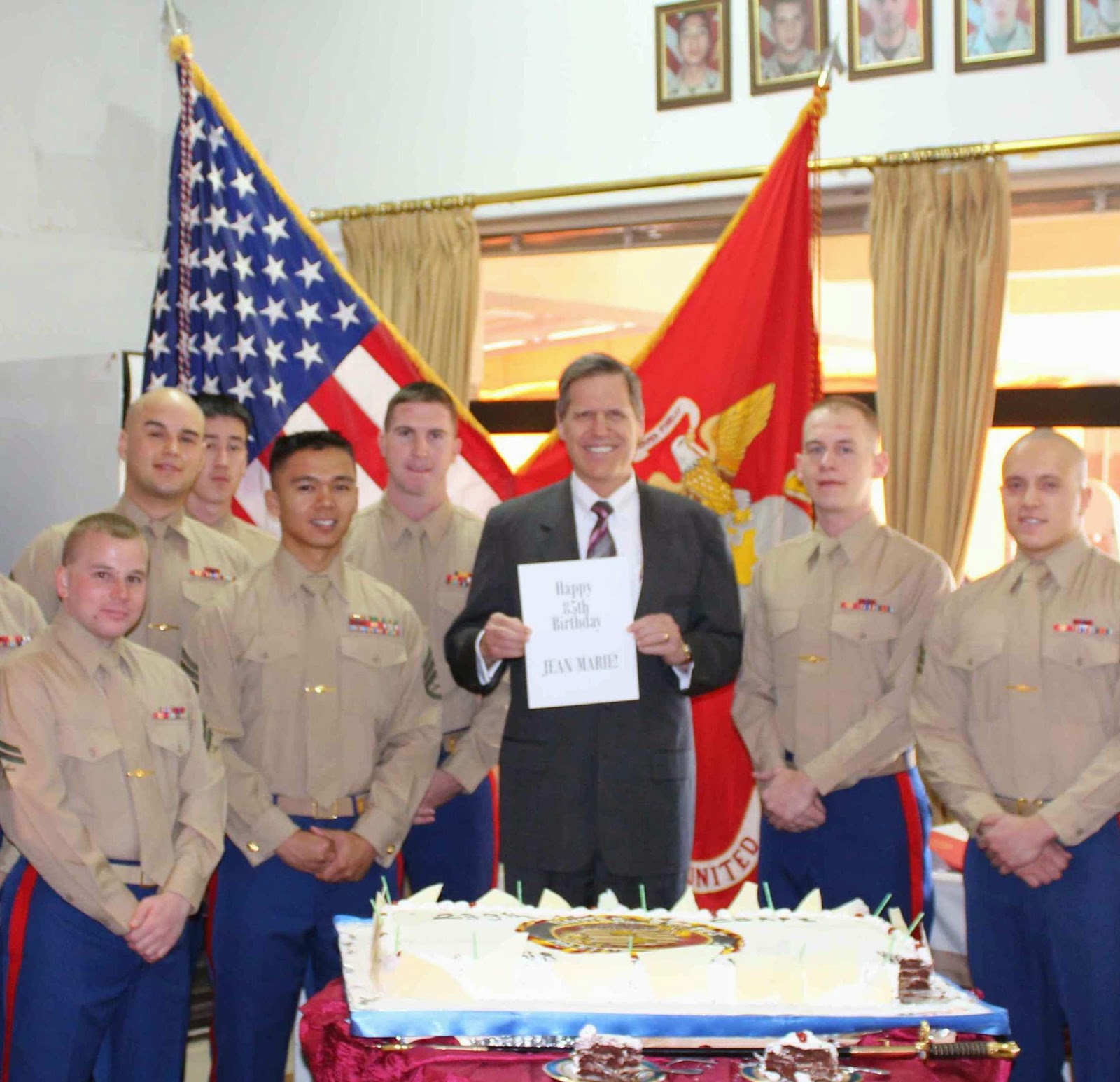 A very busy Ambassador Matt enlisted the embassy Marines (who were celebrating the birthday of the Marines) in Yemen to join in his very short birthday greeting. 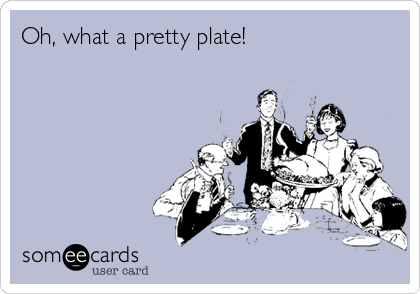 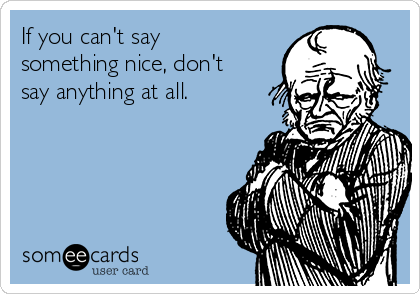 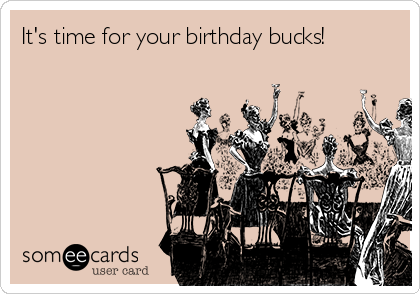 Math teacher Martha offered some thoughts on the number 85:

On the Number 85
 85 is the 43rd odd number and Jeanne (named for Jean Marie) will be 43 in December 2014.
 85 is the sum of the 4th through 13th numbers or in “Tueller counting”, Marie + Diane + Martha + Betsy + Jim + Rachel + Jeanne + Win + Nadia + Ian.
 The noun and adjective quinoctogintennary means a period of 85 years.
 85 is part of a Pythagorean triple: 132 + 842 = 852, which means that Ian-squared plus Blaine-squared equals Jean Marie- squared.
 The 85th day of the year is March 26th but Jean Marie did not have any children born in March.
 At age 85, Grandma Moses has one of her paintings featured in the background of a national advertising campaign.
 Also at 85, Joan Miro, Catalan-Spanish painter and sculptor, moves back to Spain and creates murals for Barcelona and a tapestry for Washington’s National Gallery of Art.
 Katmandu, Nepal is located at 85° longitude and was home to the Tueller-Deardens.
 Joseph Haydn’s Symphony # 85 is known as “The Queen” in B flat major.
 85 in Dutch is tachtig-vijf, in German achtzig-funf, in Spanish ochenta-cinco, in Tagalog limang at walumpu, but anyway you say it, Happy, happy 85th Birthday, Jean Marie Heywood Tueller. We love you!!!

Marie, with the help of four photos, offered this belated thank you:

This is a long overdue thank you, probably about 25 years late.

During a time long ago, when I was unhappily single, you gave me an extra large pink flannel tied quilt for Christmas.  If I remember correctly you found it at a bazaar earlier in the season.  There wasn’t anything particularly attractive about the quilt and pink never has been my color but that quilt, now much older and worn, is a most treasured possession.

Through the years, the quilt has seen me and our entire family through all sorts of ups and downs.  It is the cuddle blanket on cold days, the comfort blanket on sick days and the sleeping blanket on tired days.  It has anchored living room play tents, carpeted a sprawl of toys and been rolled up in by babies, toddlers, tweens and teenagers. It is the most often used and loved quilt in our home.

Thank you so much for your continued “mothering” through the years.  And happy 85th birthday.  You still have that magic touch. 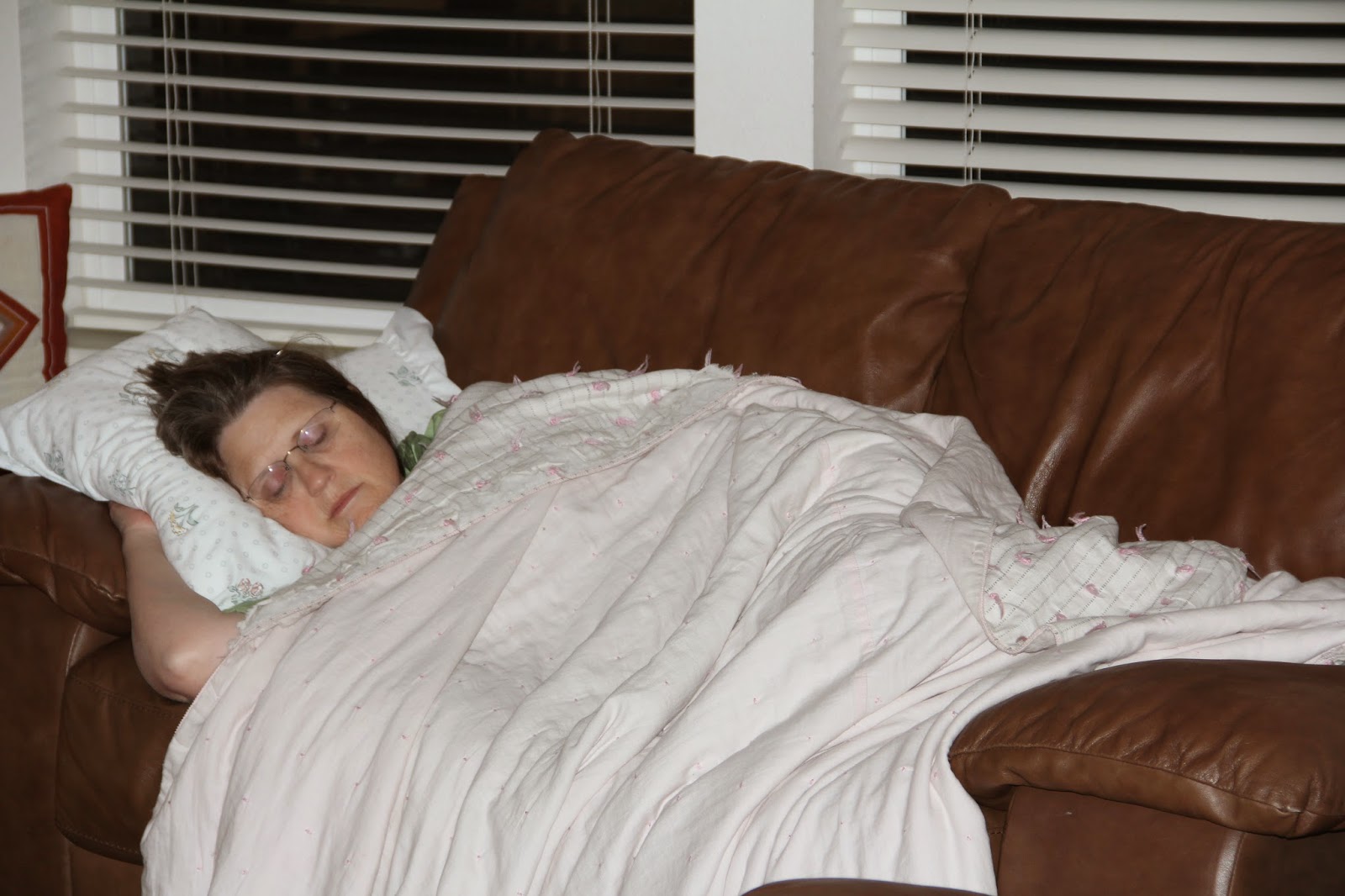 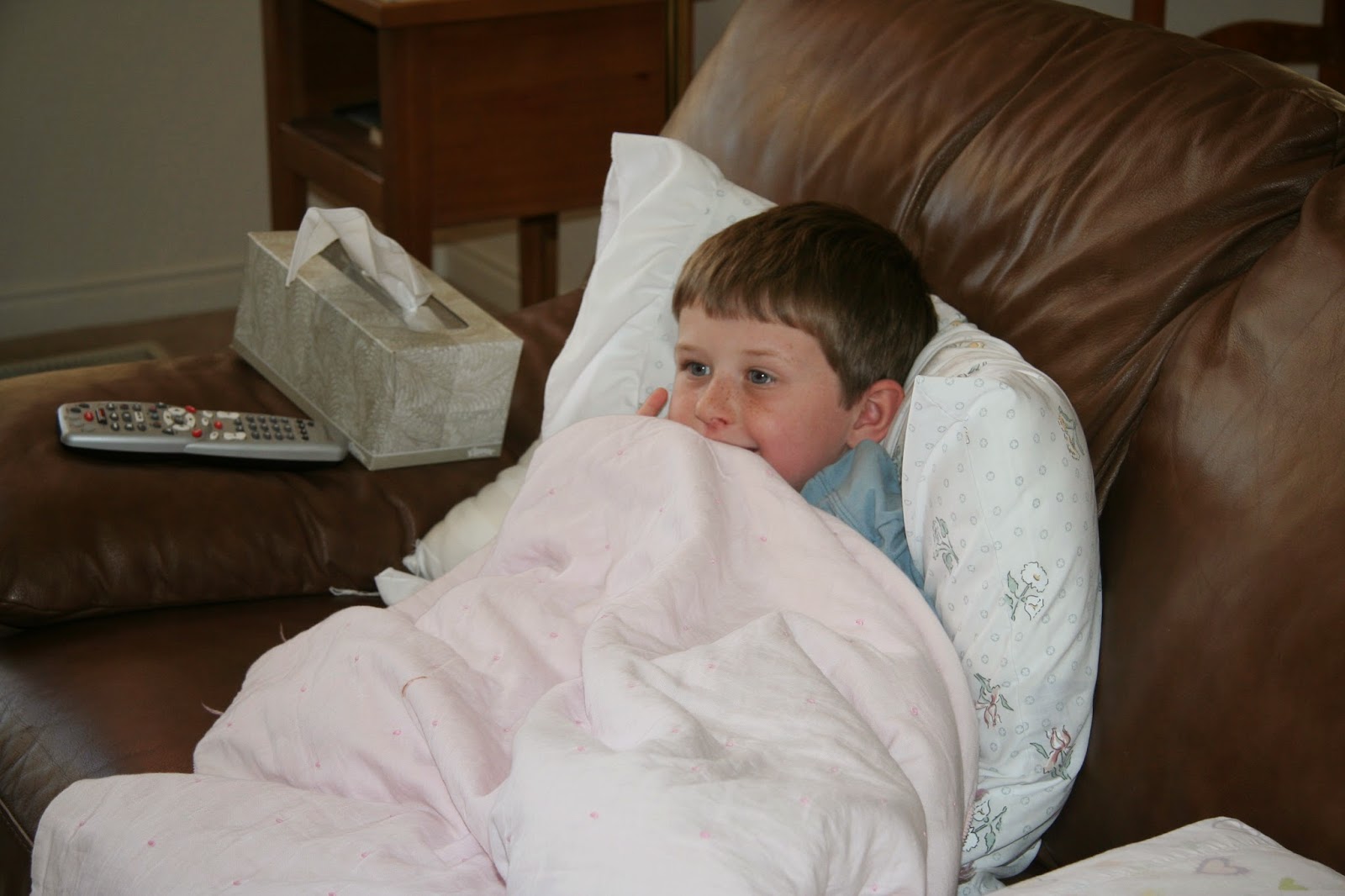 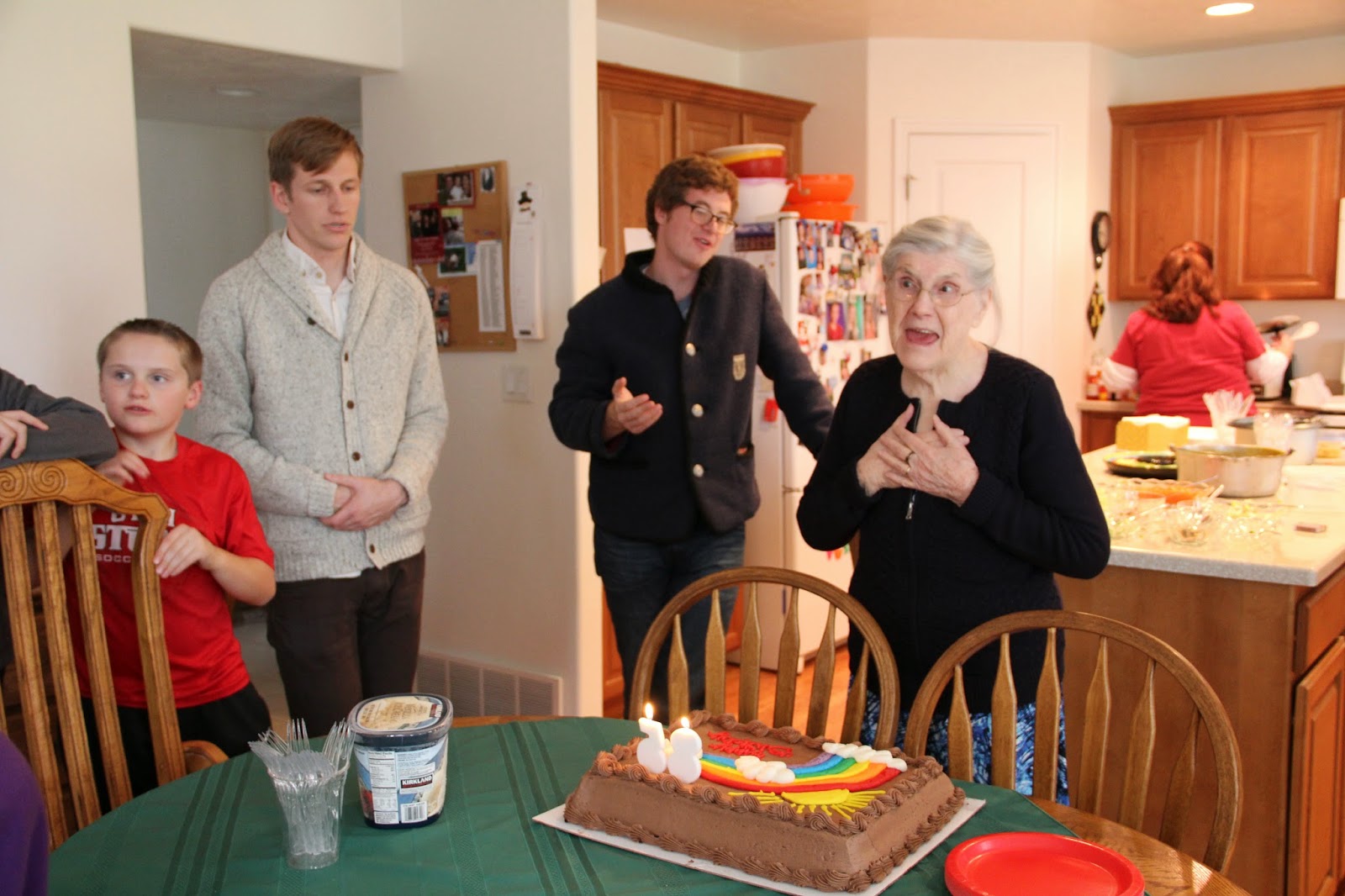 Happy Birthday to Me. Sam is wearing a re-lined blue jacket that his grandpa Blaine bought 50 years ago in Austria during the Innsbruck Olympics. 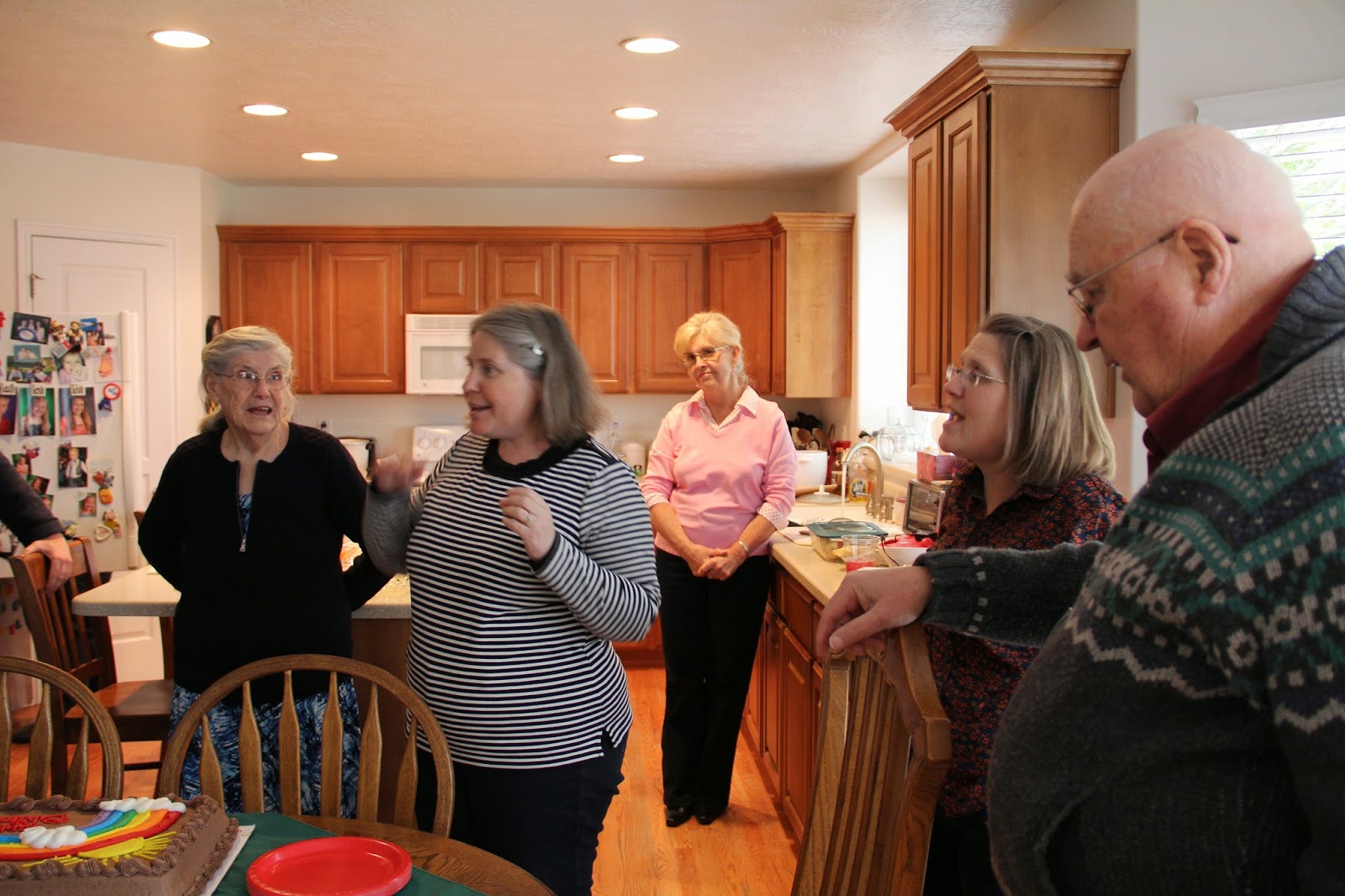 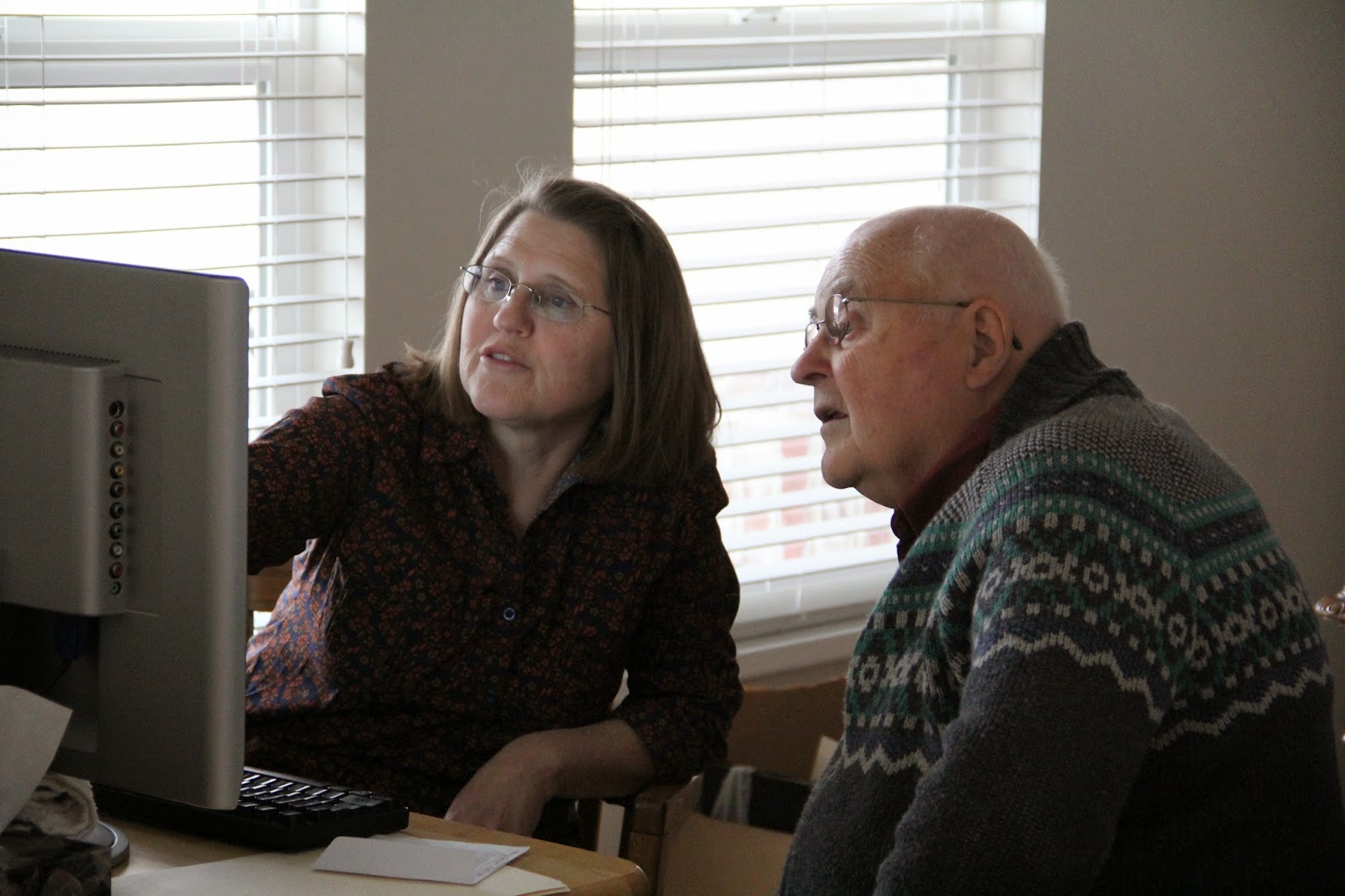 Marie showing her dad the family history files about Heywood ancestors who lived in Nauvoo that we uploaded onto a CD when we visited the Nauvoo land and record office in June. 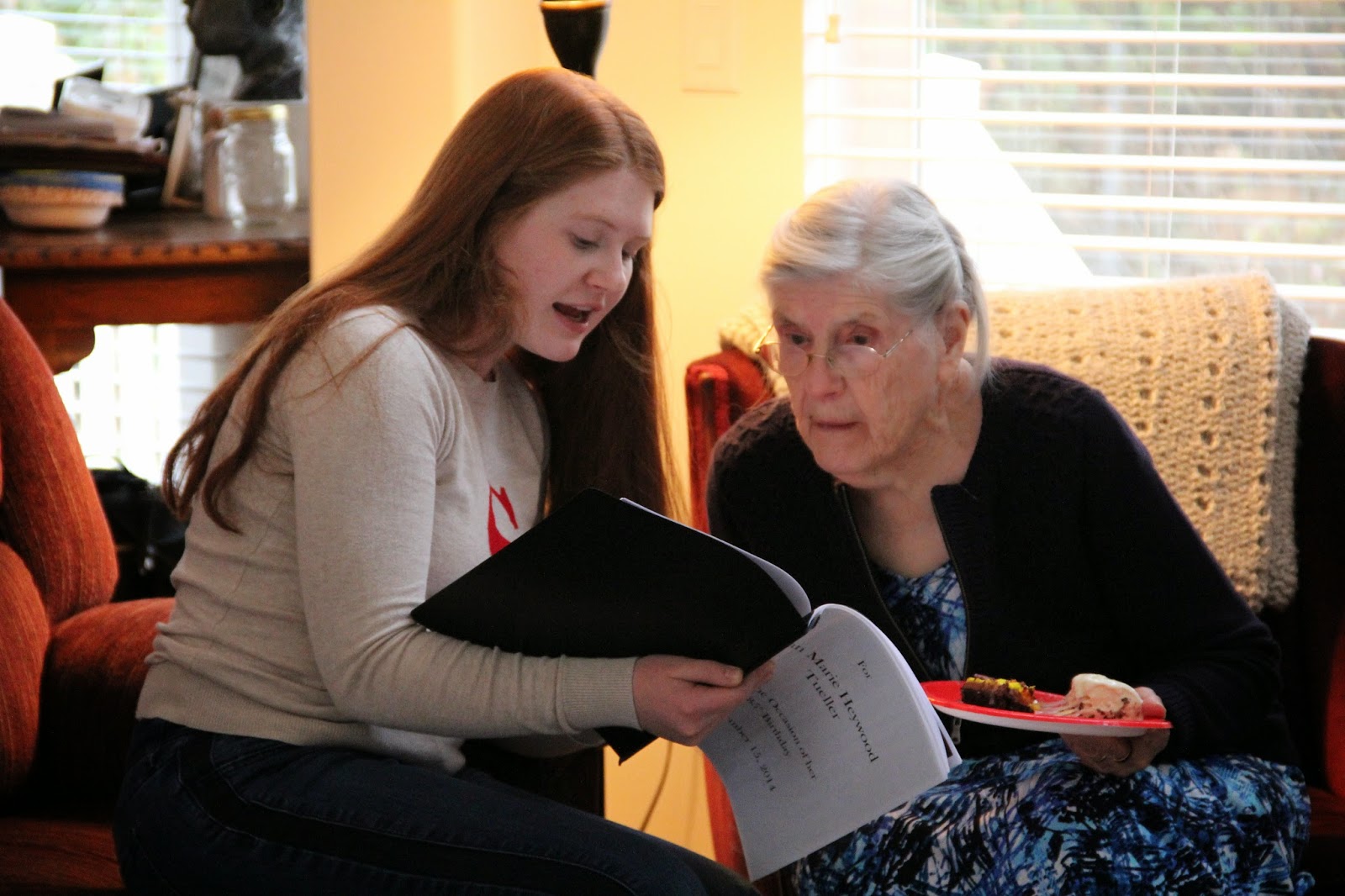