Our original itinerary included stops in Ghana and Senegal, but last fall during the height of the Ebola crisis, SAS decided to not risk stops in West Africa because at the time it was unknown how far Ebola would spread. SAS did not want to go through the laborious process of having to change ports and programs mid semester/voyage. Namibia and Morocco became the new ports. I would have loved to see West Africa, a region of the world long on my list of places to visit, but all things considered, Namibia was a delightful alternative. 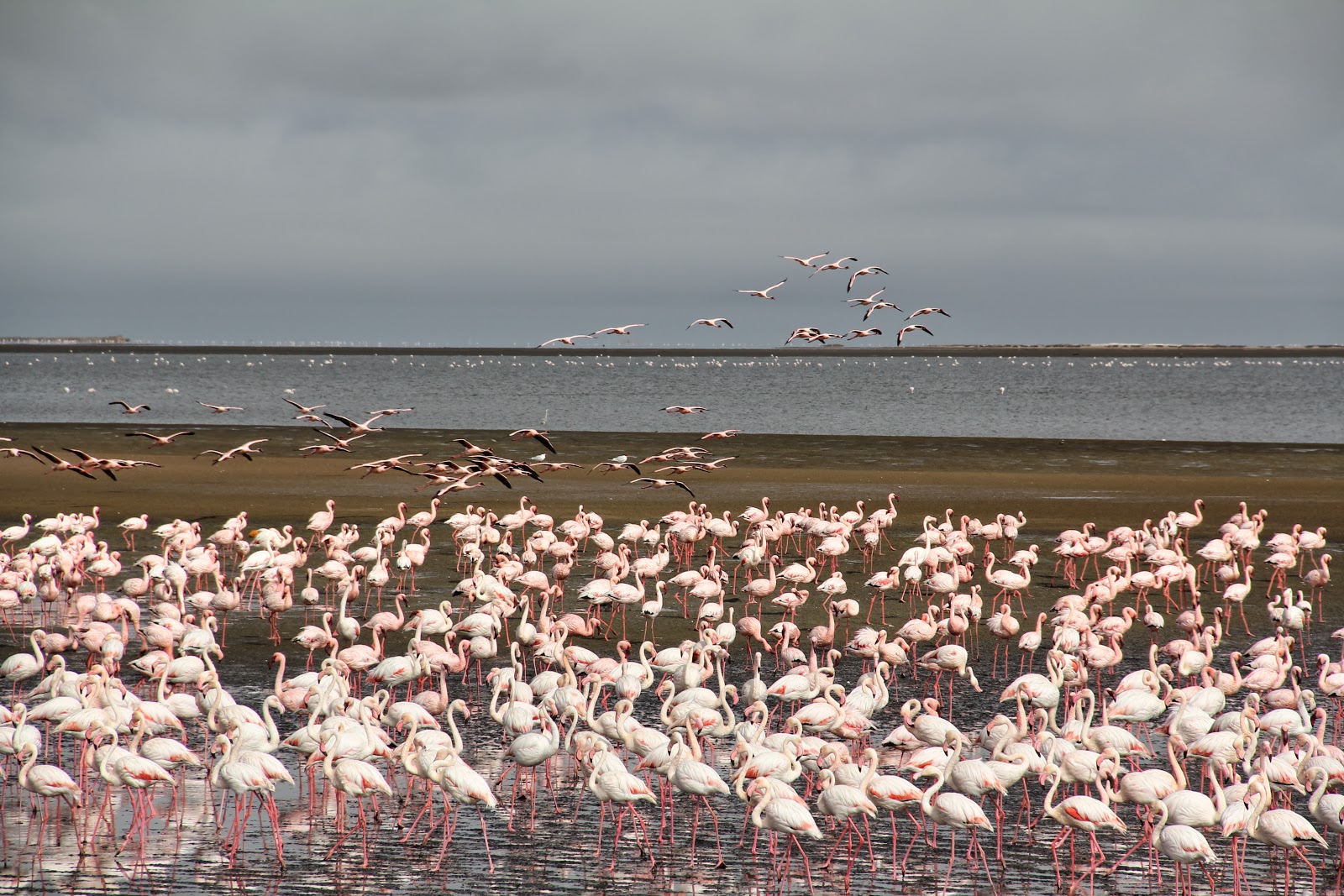 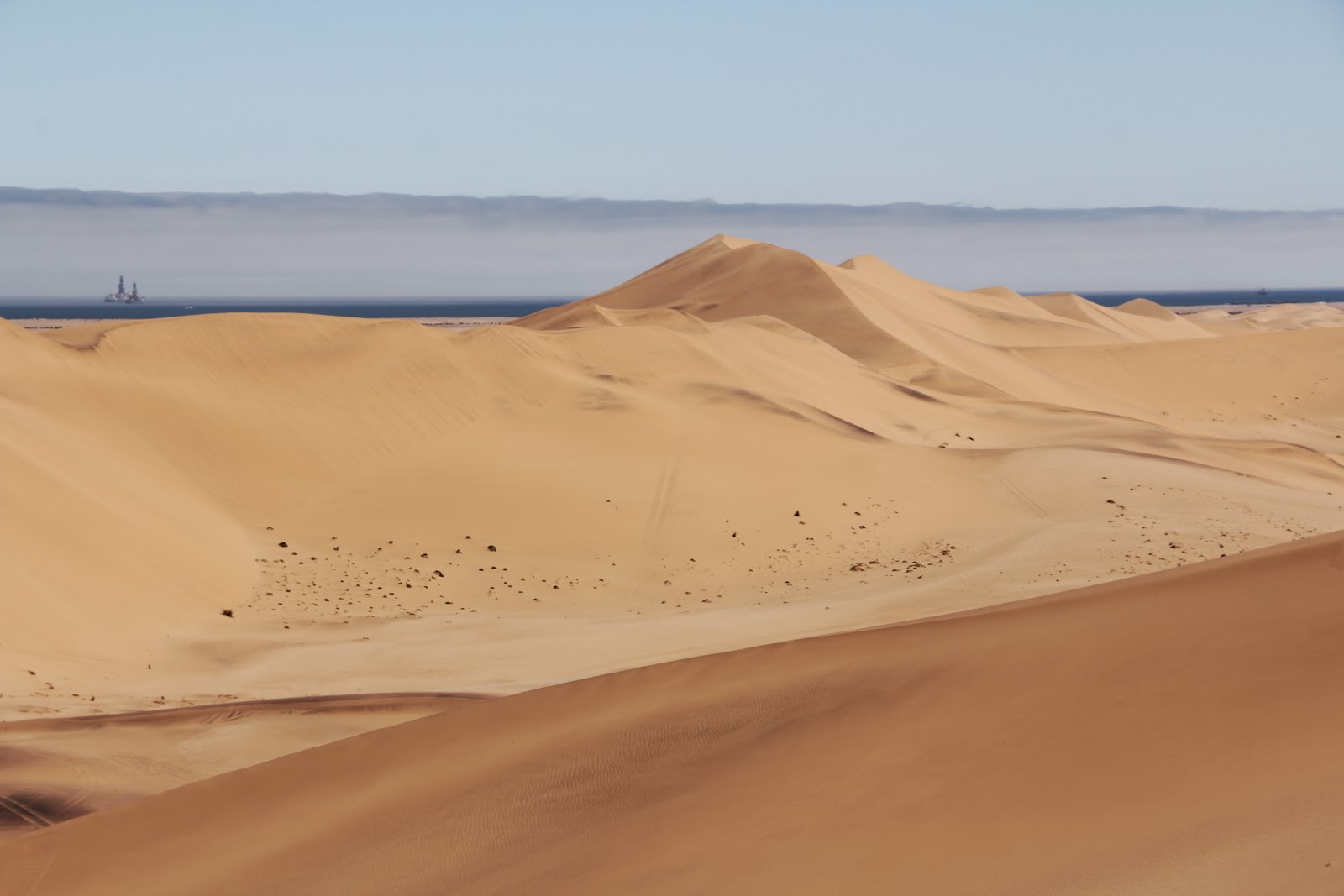 Noticed the layer of clouds over the sea. 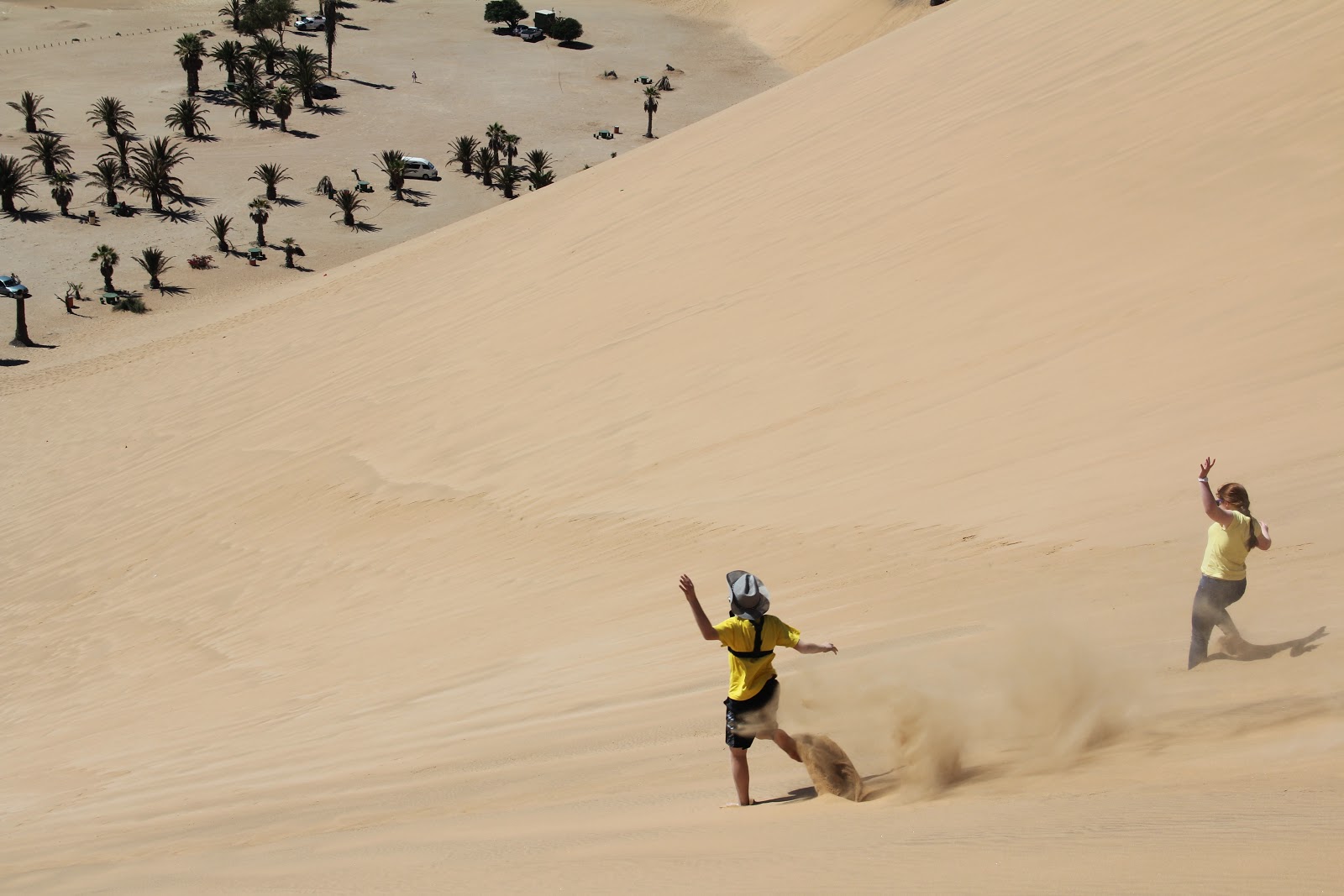 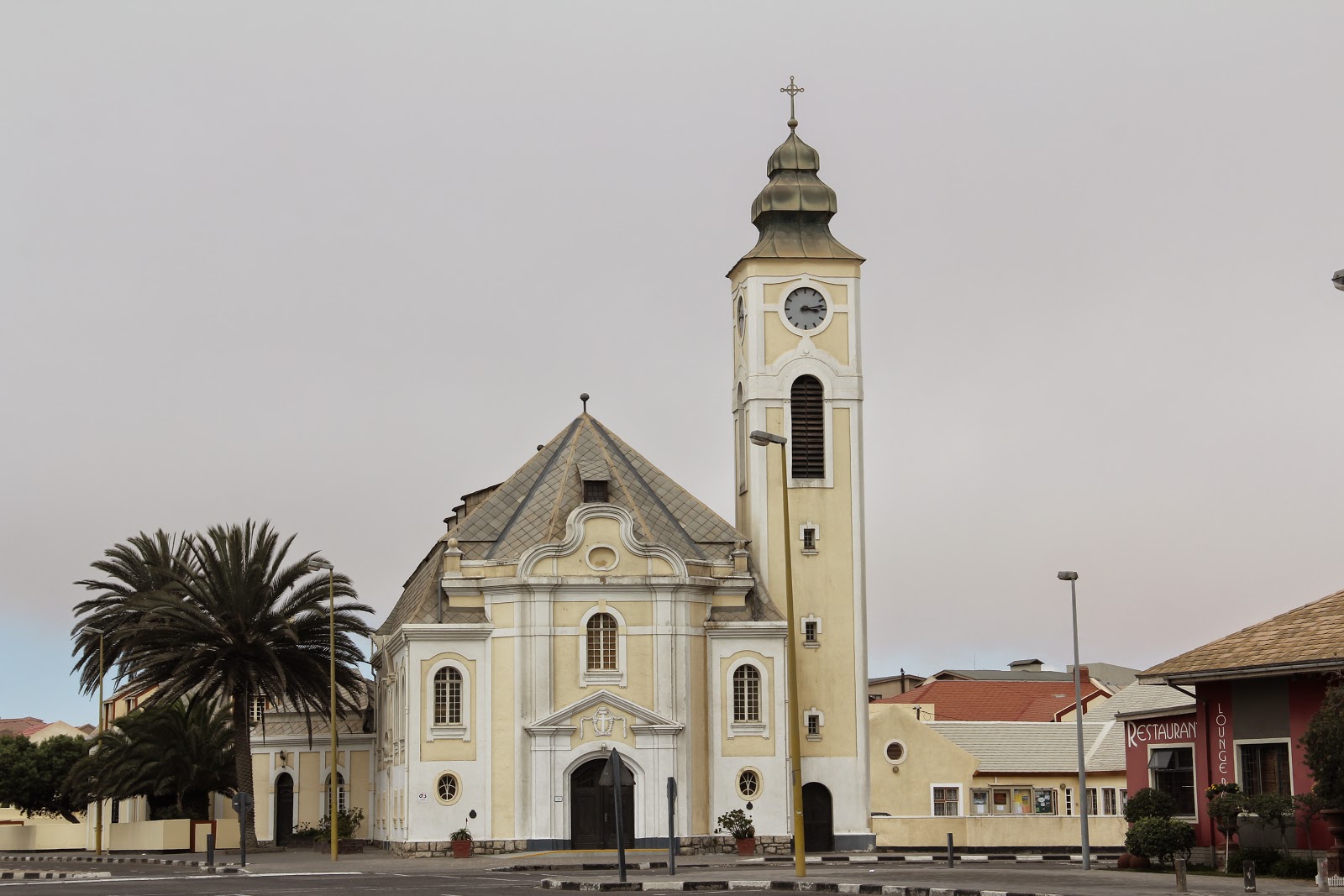 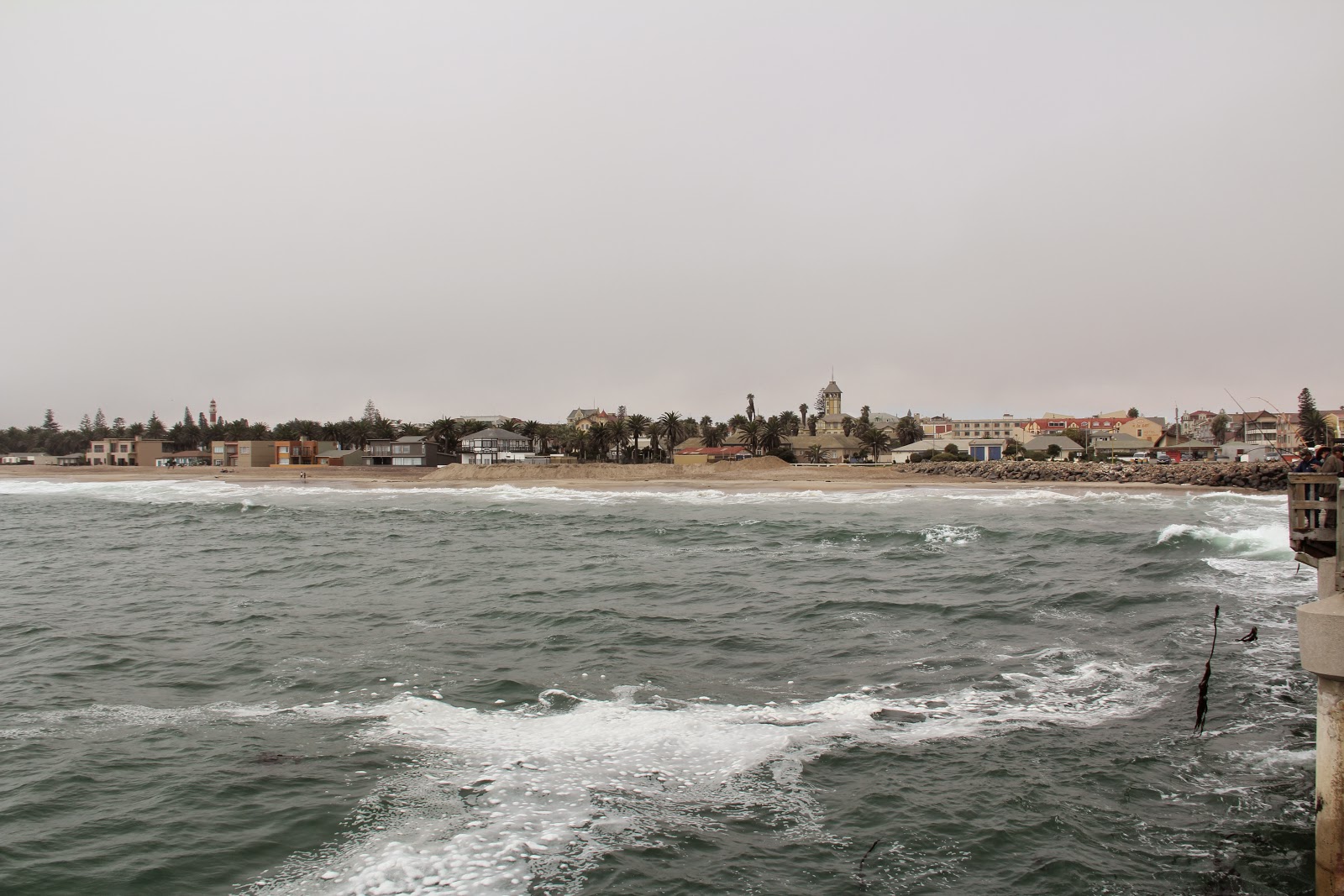 We hooked up with another faculty family that has two boys close in age to Joel and Will and we rented a van and driver for the day. Our first stop was the tidal flats south of town where hundreds of flamingos were feeding. Pretty impressive. Will had great fun running and trying to get the large flock to take flight.

Next stop was Dune 7 on the outskirts of town. I had heard rumors that there was dune skiing in Namibia so we went to this dune with great hopes to give it a try. Unfortunately the only current options for dune recreation are dune boarding or four-wheeling. The proprietor in the recreation shop thought he had heard of people skiing down the dunes, but he did not know of anywhere to rent skis. Maybe that is what I can do when I retire, move to Namibia and set up a dune skiing operation. In stead we enjoyed a hike up the tall dune where we enjoyed a nice view out towards the fog shrouded ocean (caused by cold water rising up to meet warm air) and then all enjoyed running and jumping down the dune.

We then traveled 30 km north to the German colonized town of Swakopmund. Its harbor silted over long ago under South African rule and so this town is less industrial and more quaint and touristic than utilitarian Walvis Bay. We enjoyed a delicious lunch of bratwurst (Joel) schnitzel (most of the Emmetts) and delicious fresh calamari steak (me) followed by a complicated money exchange at a bank, yarn buying for Sarah and then a visit to a German bakery for gelato and apple strudel. We walked down to the beach (very cold water), then drove around town looking at German architecture and stopping for a walk out on the pier. It was a great day visiting two of the three main coastal towns of Namibia's Namib Desert--which runs the length of the country. We were dropped of in the center of town to buy some snacks after which we walked through town (passed one nice xeriscape yard) and the port (where we passed large blocks of white marble ready for export) to our ship

Next day was the first of our four day SAS field program to Etosha National Park for a two day safari. The geographer in me was thrilled to be transiting through three distinct climate zones: the Namib Desert (similar in location—30 degrees south latitude; cause—upwelling of cold currents and lack of prevailing winds; and environment—very dry, great fisheries and source of bird guano—to South America’s Atacama desert), steppe climate (with dry scrub that resembles parts of Utah) and then savanna (with plains and low woodlands where so many of the classic animals of Africa live). Our drive took 12 ½ hours thanks to many pit stops and then a two hour detour around a jack-knifed truck that closed a main road. At one of our final gas and pit stops, I bought a bag of delicious locally grown oranges for Sarah (to share with us and the students on the bus). She has really missed unrestricted access to fresh fruit--which at home often includes multiple oranges a day or lots of berries and other season fruit. On the ship it is cut melon or canned fruit for breakfast, and either a banana, pear, apple or orange for lunch and another for dinner depending upon what was available in earlier ports. 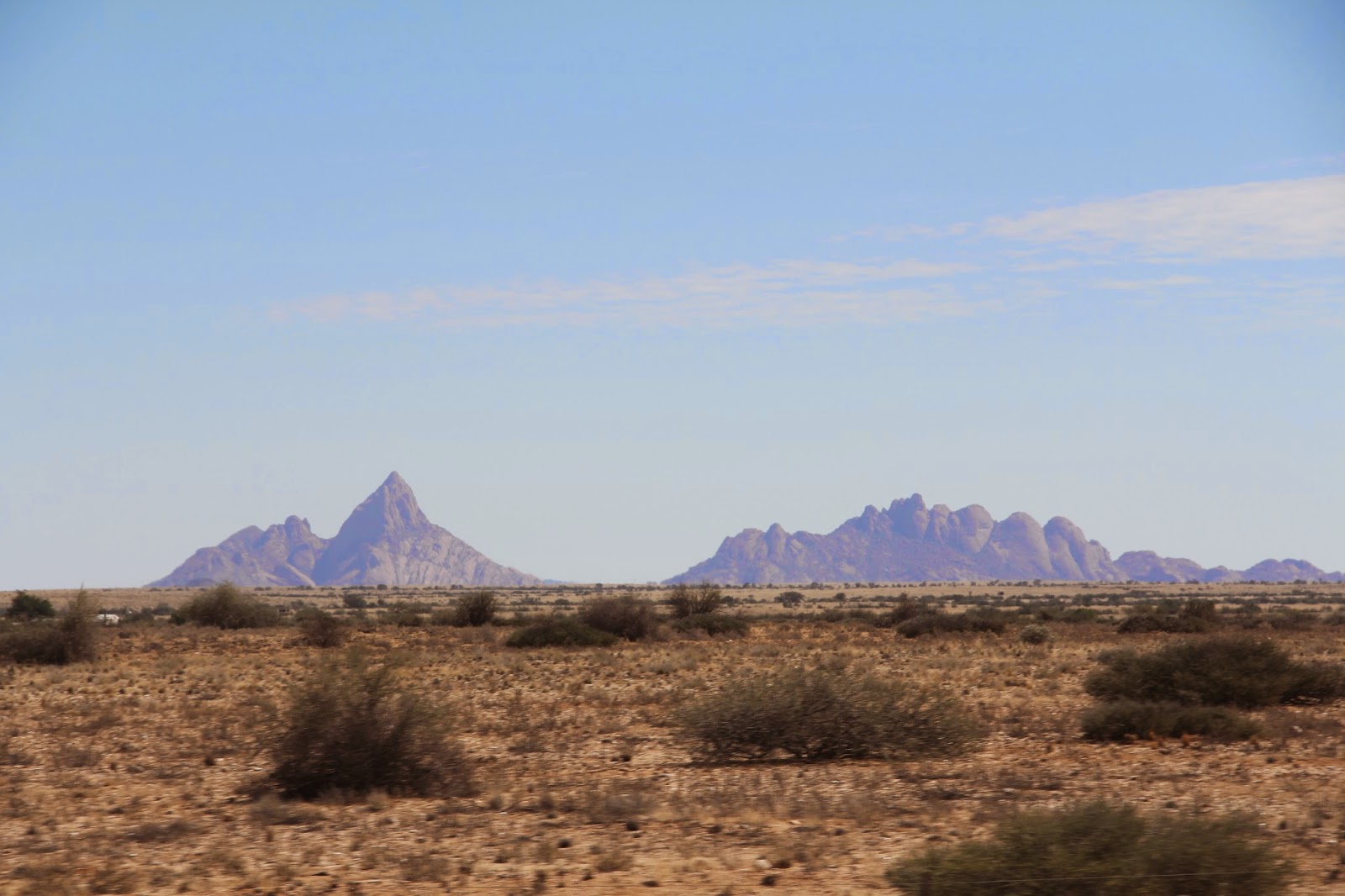 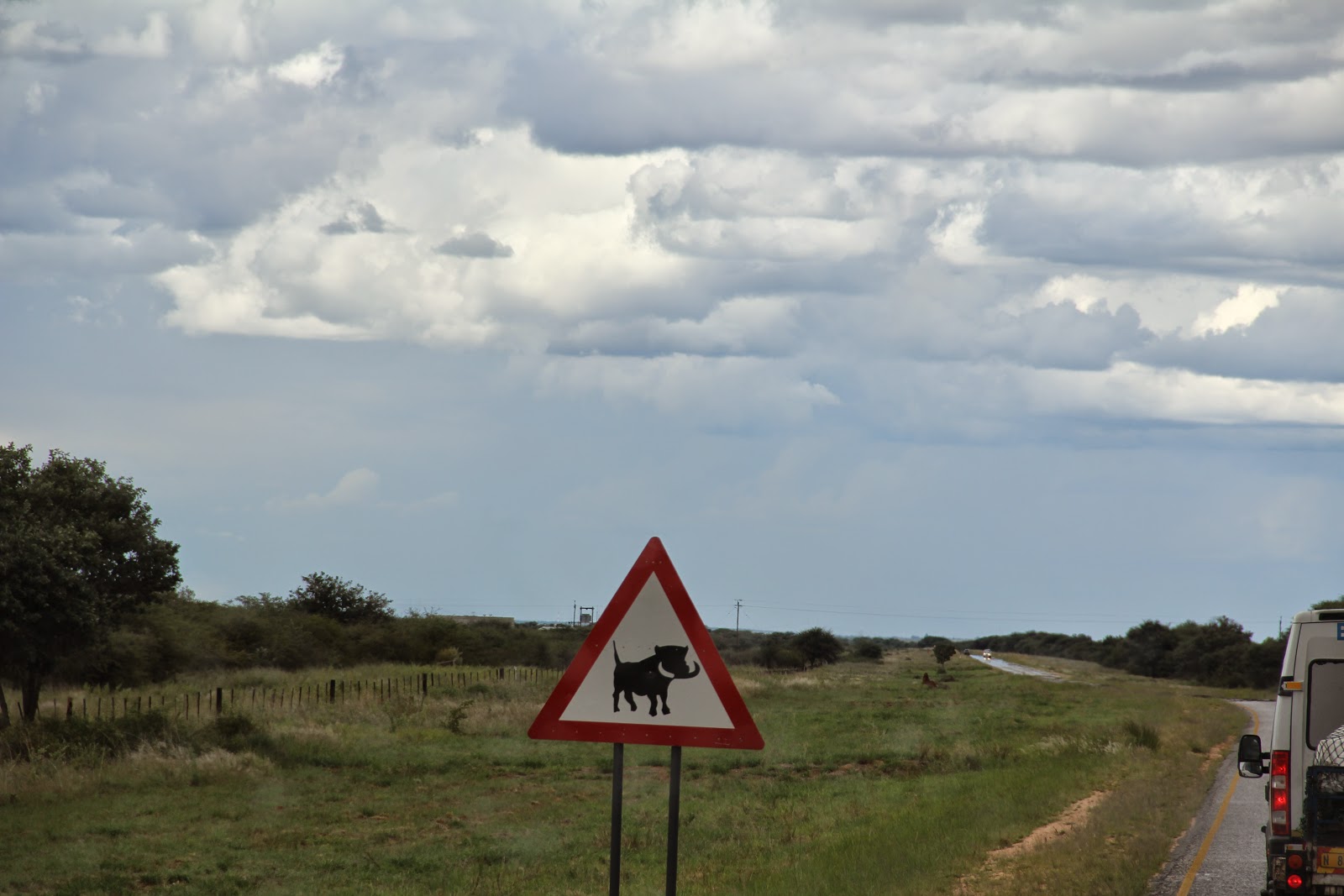 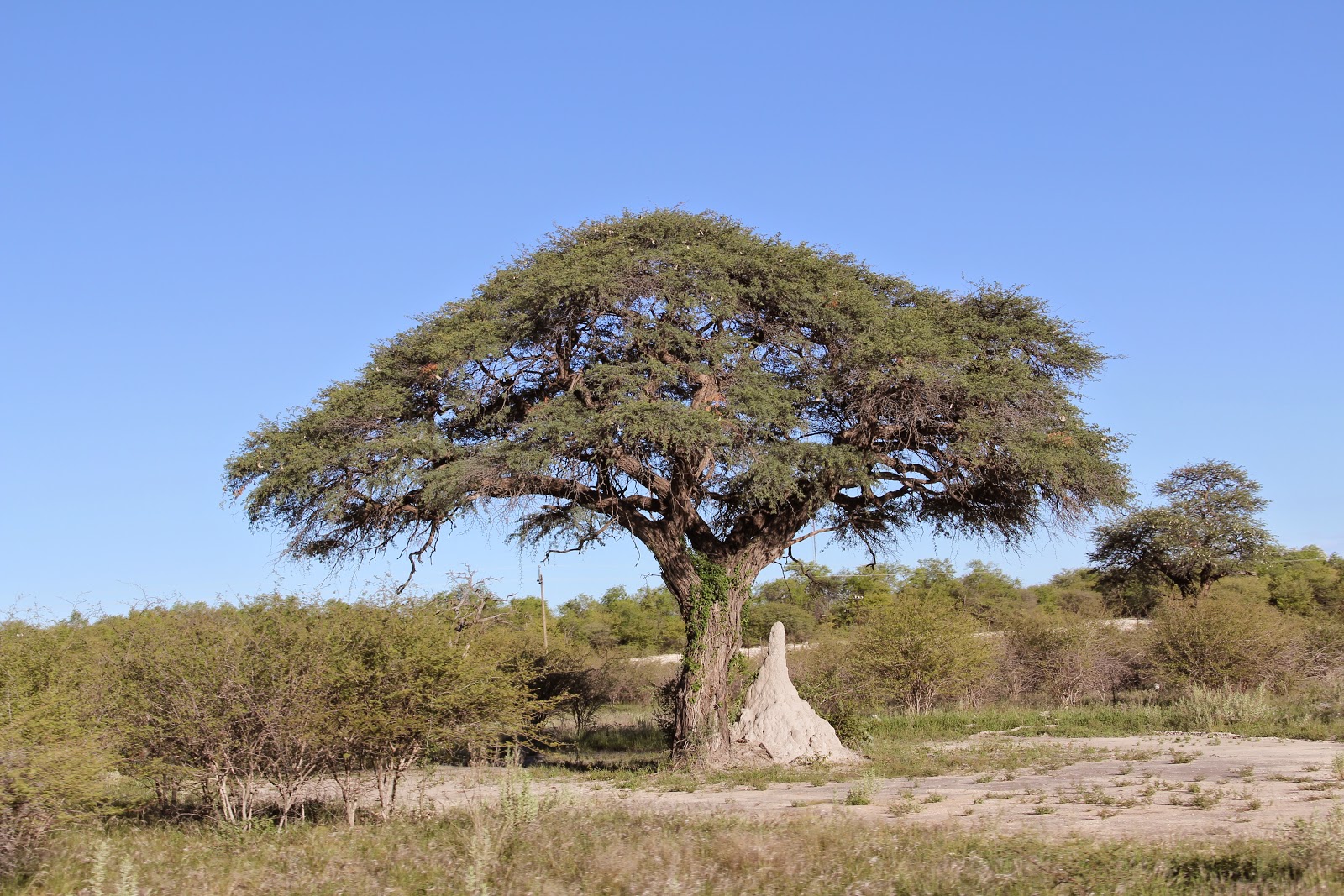 Termite mound (one of thousands we saw). 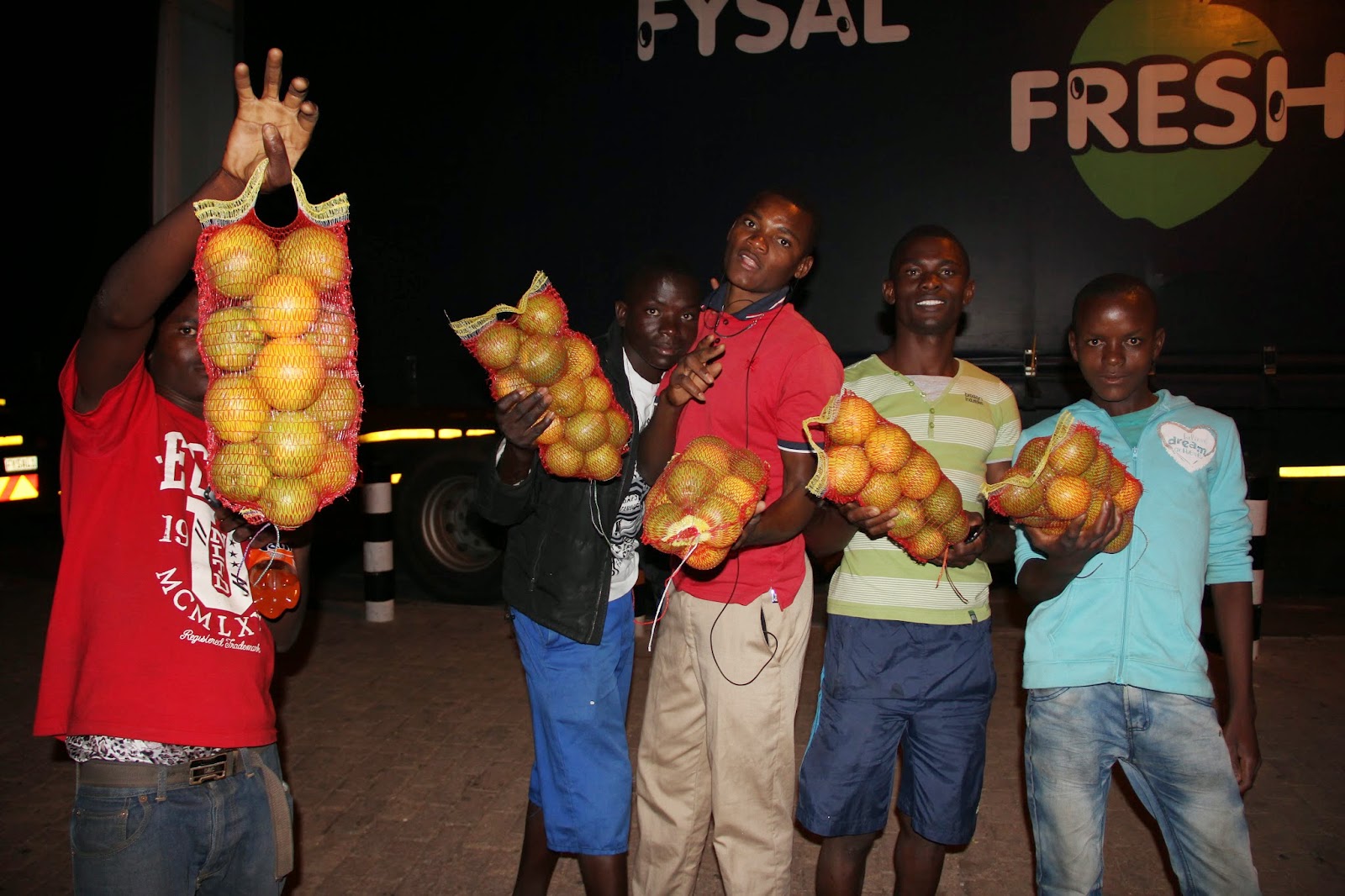 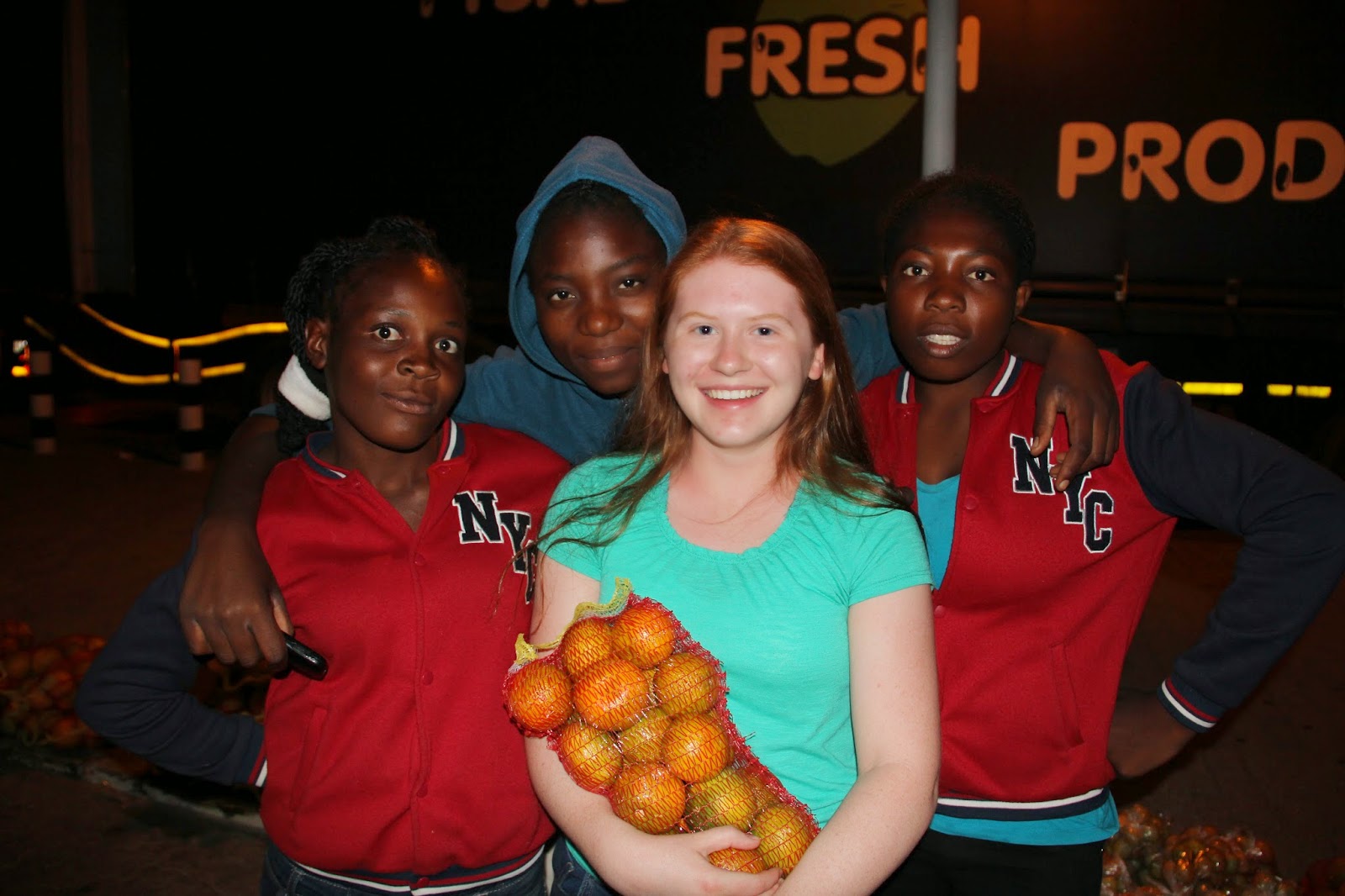 Before departing we as a family decided which one of the many overnight programs sponsored by SAS we would participate in. Our options included four day trips to impressive destinations like the Great Wall and Beijing, Angkor, Bagan, and the Taj Mahal and New Delhi. We, however, liked the idea of a safari, something that would be hard to do, or afford, as a family. Many students and other faculty families have participated in many of these extended on shore excursions, but they are expensive and so we budgeted for just one. I think we made a good choice. Joel has already provided an in depth account of our safari. It was wonderful.

The second day of our safari was Easter/General Conference Sunday. I had hoped that we might be able to watch a session at night via the free wifi at the lodge, but lightening had knocked out service the day before so we were out of luck. Instead we read the Easter story and sang a hymn in our room Sunday night. We also brought some Easter candy from South Africa to enjoy. Our guide Hazel also gave us all a chocolate covered marshmallow egg to enjoy. That afternoon between safari outings we enjoyed a swim in the pool. One of our kids commented that seeing a lion and so many other animals in the wild was a pretty uplifting way to spend the day. Agreed.

Next day the ride home passed much faster. One stop along the way was at a deep sink hole lake where retreating German armies during WWI dumped their canons and guns so the British wouldn't use them. Another stop was for gas and toilet (2 Namibian rand per person to use). Inside the modern food mart, the flat screen, satellite TV above the check out counter was playing a familiar life of Christ series. 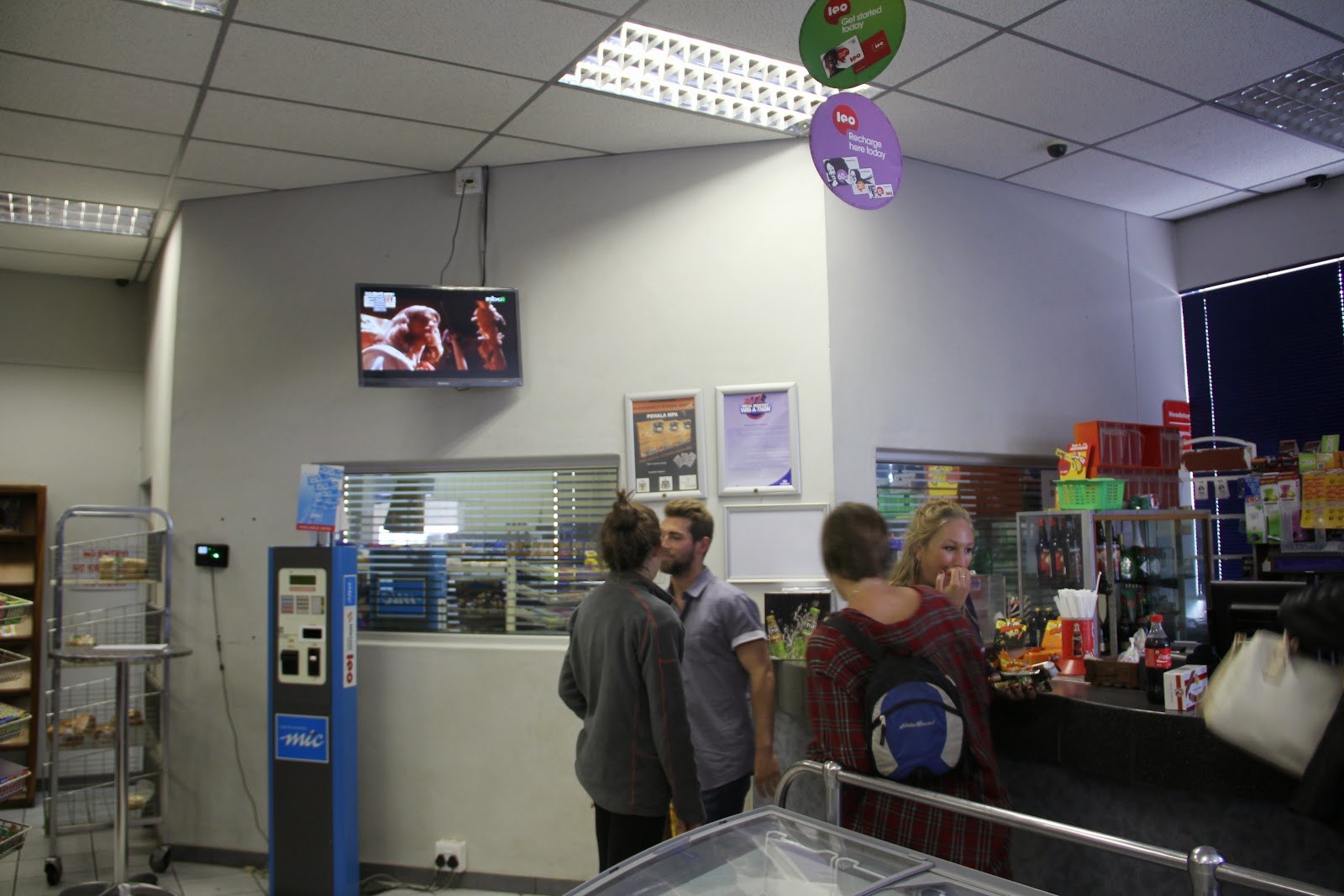 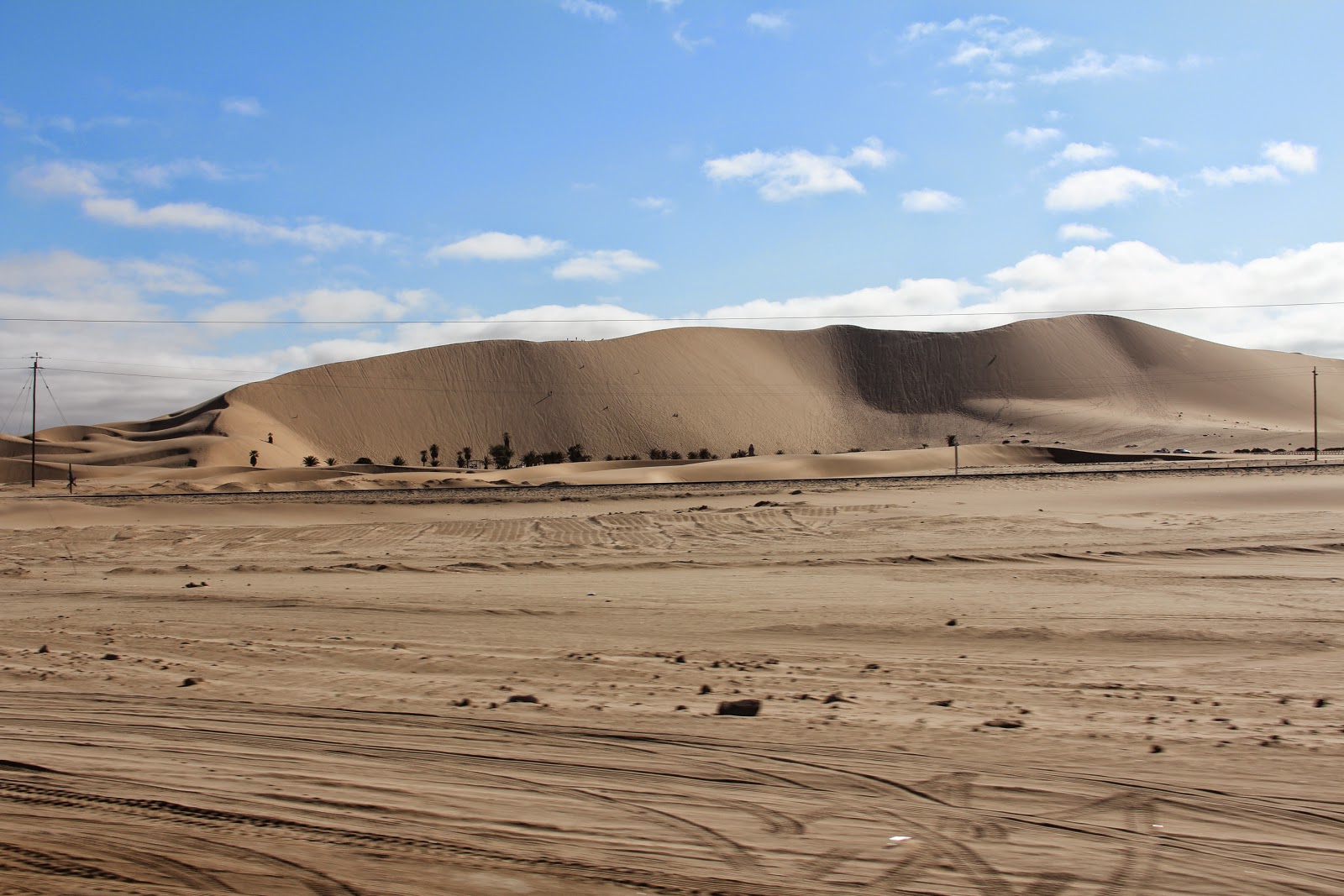 Passing Dune 7, with hikers, on our way back to Walvis Bay.

One thing we learned in our pre-port lectures about Namibia was of the near annihilation of the restive Herero and Nama peoples by the German army in the years leading up to WWI (how did so many of us not know of this?). Thousands of Herero died (60% of the population) in work camps that then became the model for the work camps of the Third Reich. It was amazing to learn that Germany perfected its genocidal methods in its far off  colony of Southwest Africa. Being in Africa reminds me once again about my on-going puzzlement with the absurd thinking that colonization and ethnic segregation and even annihilation are somehow justified.
Posted by chad at 1:09 AM