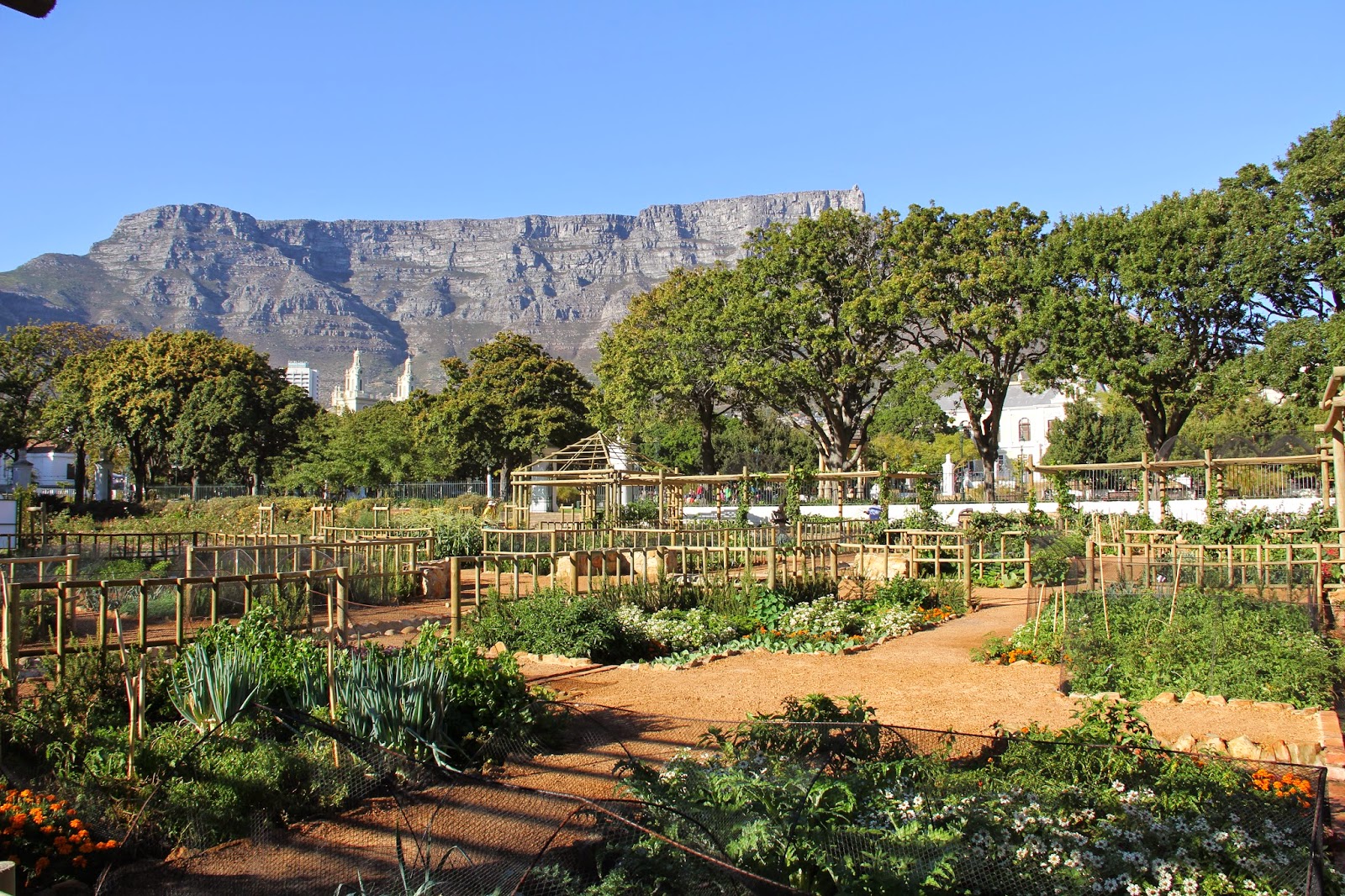 Day One. We visited the Company Gardens of the Dutch East India Company. This green space in the center of town was where vegetables were grown to restock spice trading ships. The gardens are now more like a public park but there was a nice replica of a Dutch era vegetable garden. We then used the free wifi at the Holiday Inn Express for uploading new books and games and blog photos. Lunch was at street side café eating delicious pizza while watching street performers. We then walked to the Dutch Castle of Good Hope—a star shaped fort that was built to protect the harbor. Our final stop was at the District Six museum. This museum is a memorial to the many coloured families who were forced to move from district six in the center of town to a township out on Cape Flats. The small houses were then all leveled. This was during the height of apartheid and was done in an attempt to free up land for more white housing. 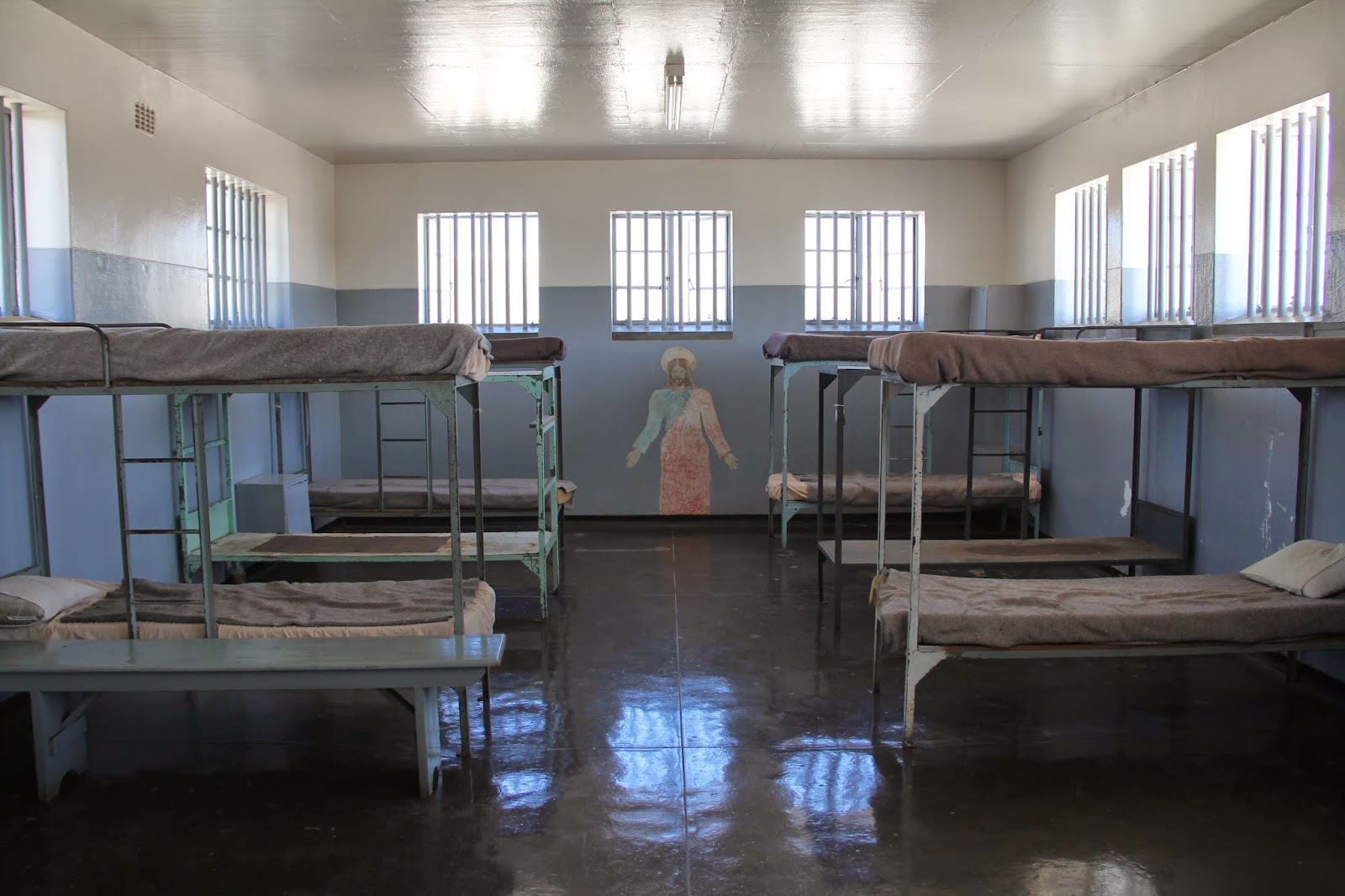 Day Two: Morning visit to Robben Island. It involved an hour long boat ride out and back to the former leper colony, military base and then apartheid prison. Guides in the prison (Nelson Mandels’s cell is the prime attraction) are all former political prisoners which adds to the reality of the grave injustices of apartheid. The morning cloak of clouds covering Table Mountain disappeared in time for our return trip which afforded us with some stunning vistas. We had lunch in the V& A waterfront mall food court. Happily we found a falafel/shwarma shop run by an Israeli who emigrated to South Africa 30 years ago from Haifa. When all five of us ordered falafels, the falafel assembler asked if we were all vegetarians. No, we were all just a little homesick for Jerusalem style falafels. That afternoon we enjoyed the Two Oceans Aquarium with its penguins, impressive kelp forest and large tank of local fish, two sharks and a turtle—who loved being the center of attention. Next time I am going to make sure I schedule a dive in this tank with the sharks. We then had a successful shopping stop at a store that had great locally made gifts including a beaded Zulu nativity that we bought. 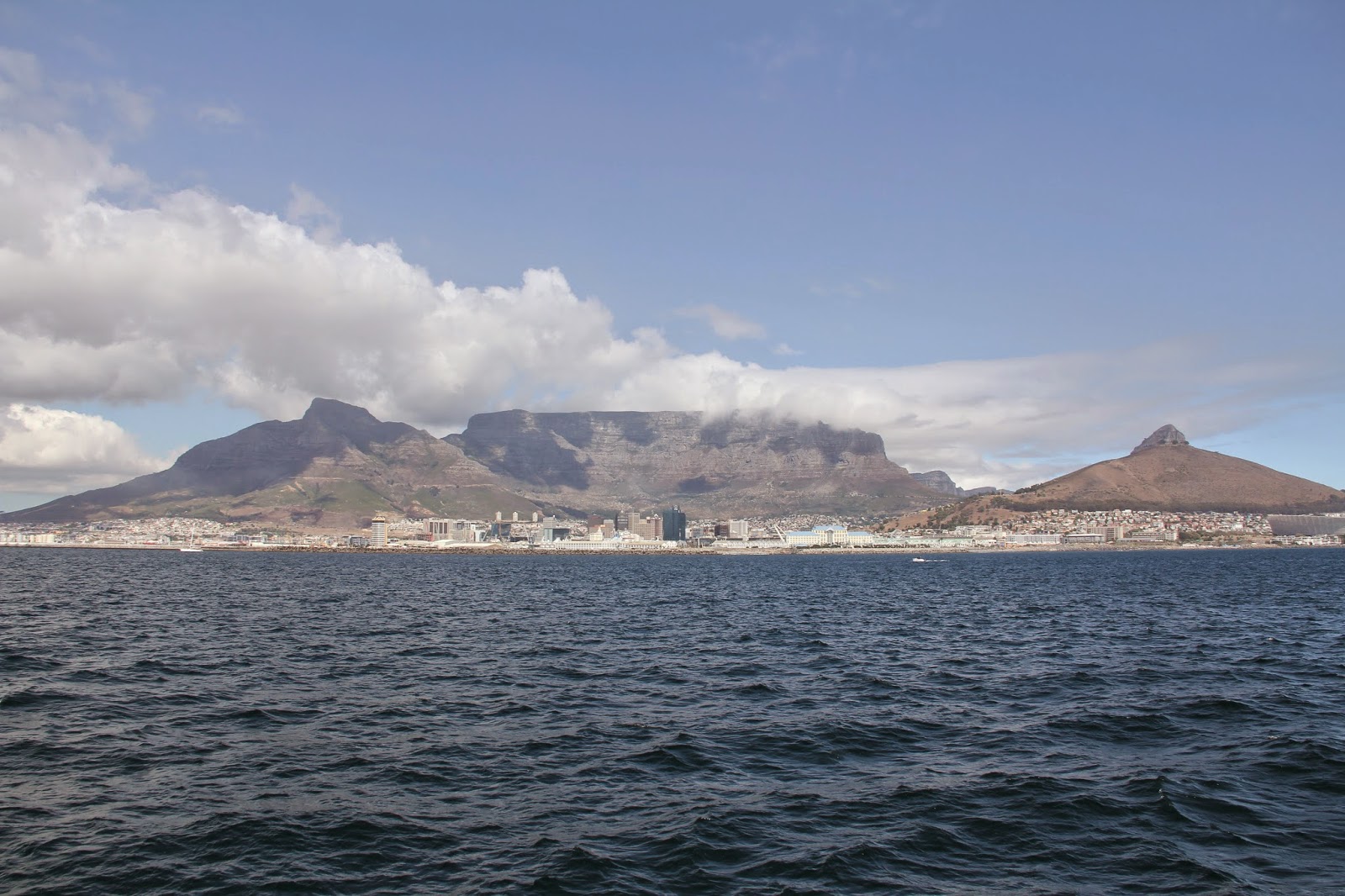 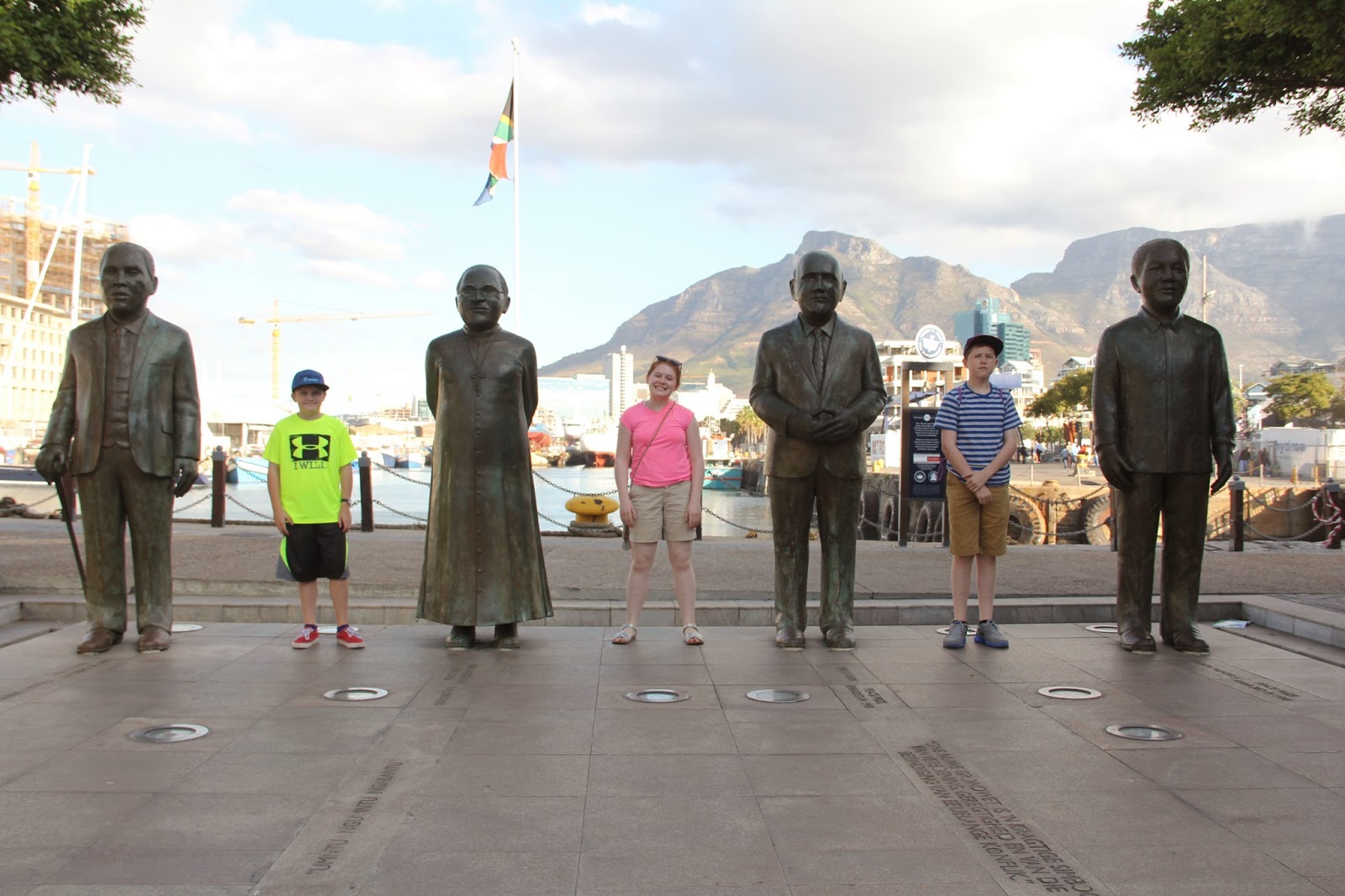 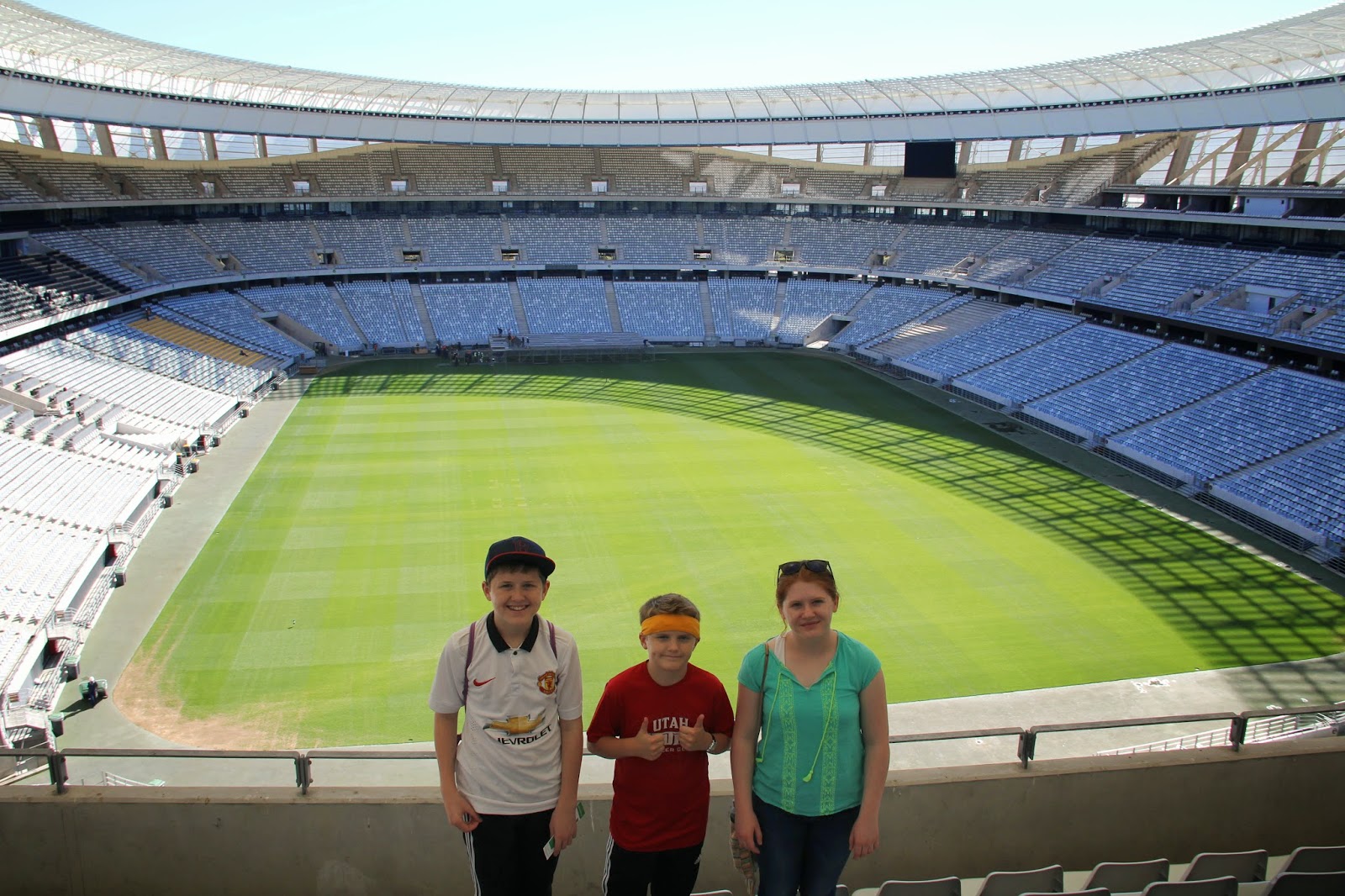 Day Three: We had plans, but they didn’t go as planned. One thing Joel (as well as Will) really wanted to do was to visit the Cape Town Stadium that was built for the 2010 World Cup. We walked over in time for the 10:00 tour only to find out that because the stadium was in the process of being set up for the One Direction concert on April 1st, the hour long tour—which included visits to the field and the locker rooms, was now just a 15 minute visit to the upper concourse of seats for a look down on the field. It is an impressive stadium built with an outer sheath that keeps rain out but allows air to flow freely. Joel was interested in knowing which teams had played there (World Cup and other games) so he could envision who among his soccer favorites had played there. After our modified plan A we moved onto plan B which was to ride the tram up to Table Mountain (initial plans to hike up were tempered by reports from first day hikers who said it was a rough hike). We caught a cab up to the base only to find out that high winds were keeping the tram closed. Rats. Rather than enjoying lunch from atop Table Mountain we went back to the ship for lunch and to see what plan C might be. We finally agreed on a trip to Kirstenbosch Botanical Gardens. It was a nice addition to our Cape Town adventure. The kids loved climbing in the huge wild almond tree that was planted as part of a hedge to keep the local Khoisan from rustling Dutch cattle.  Some suggest that this wall of trees between white and black was the beginning of an apartheid approach to racial differences. We also enjoyed the canopy walk—with a close up view of an owl. There were other new and unusual birds to see, plus a snake. The expansive gardens were full of all kinds of varieties of plants and trees. We spent three hours walking around. Will and I even went back to the almond tree for one last climb. For dinner we use a Lonely Plant recommendation for a surprising delicious Mexican Restaurant—El Burro. We were all delighted with the very authentic fish tacos, beef tacos, and grilled line fish with mango salsa. We also like the local sparkling grape juice made with grapes from the vineyards of the Cape. 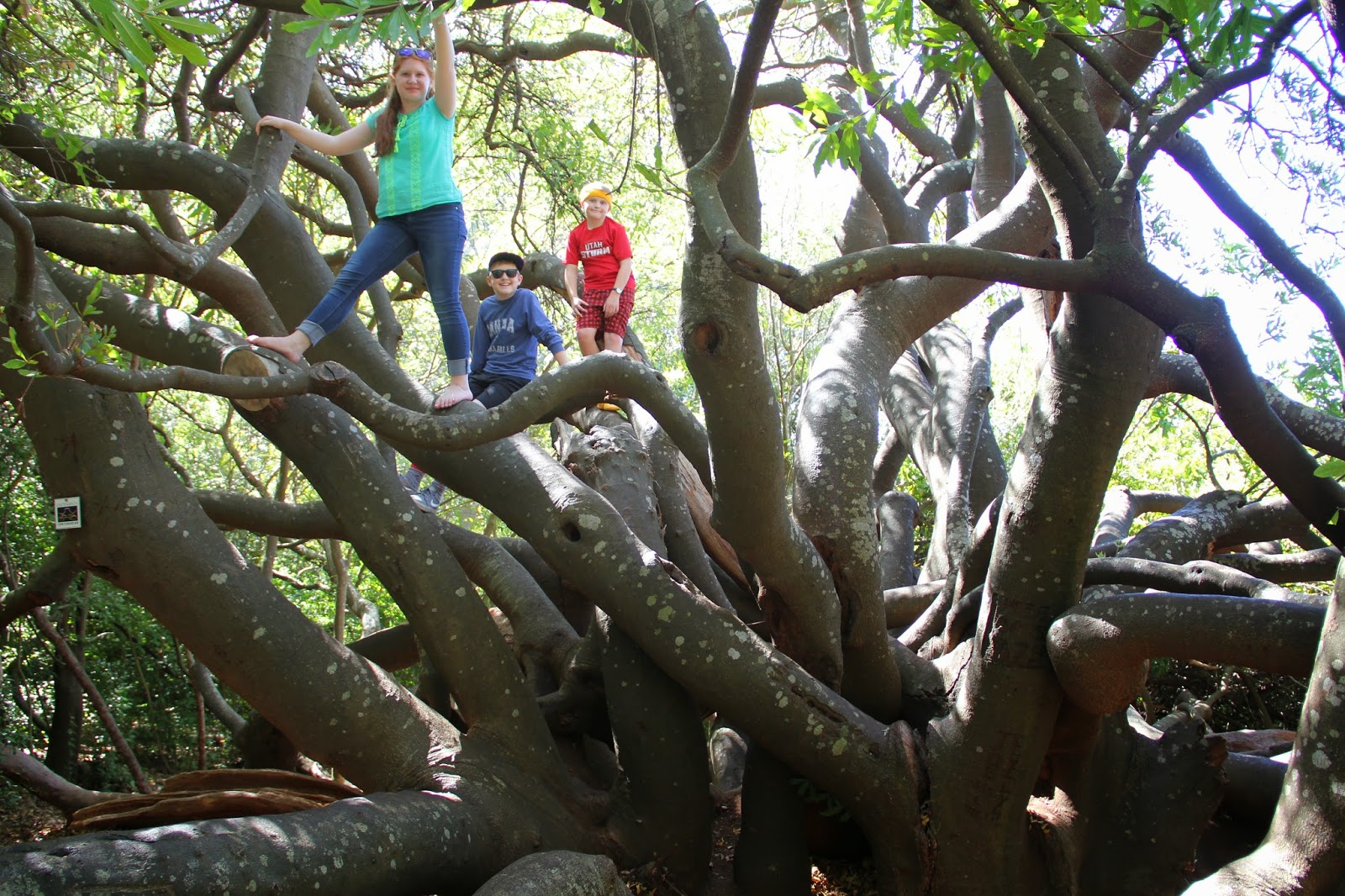 Day Four—Will’s Report: In South Africa we went to Cape Point. It is the second most southwest point in Africa. It was so windy I almost fell down. We also walked up to a lighthouse. It was the windiest of all the places we went. After that we drove down to a beach. I saw a star fish and saw some weird fish. And then we went to eat at a restaurant. I got line fish and cream soda. It was so good. Then we walked over to see penguins. They were about one hundred of them. They were so cute. After we saw the penguins I got to buy a fuzzy stuffed animal penguin. Then we took the bus back to the ship.

Day Four—Chad’s Report: We had contemplated renting a car to go see Cape of Good Hope and the penguins and Boulders, but in the end we opted to go on a SAS field program. We headed south skirting Cape Flats (the more scenic route on the Atlantic side was closed due to unstable slopes after a large brush fire a few weeks ago.) As our bus was climbing up into the Cape Mountains the gear box dissolved and the bus rolled to a stop on a small shoulder on a big bend in the road. We waited for about 45 minutes for a new bus to come and then we drove south to the Cape of God Hope and Cape Point. It was a windy hike up to the light house. Being there was a geographer’s dream. We didn’t have much time, but I did do some wading in the cool water. Next stop was at Boulders to see the colony of penguins. So fun to watch them waddle. The adjacent town of Simon’s Town is the headquarters of the South African navy. We got back early enough for Joel and me to go on a walk-about through downtown Cape Town. Of interest were the brightly colored homes of the Bo-Kaap neighborhood inhabited primarily by Cape Malays. We happened upon two wedding photo shoots, one in Company Gardens and one in a purple painted home. That night we went back to the V & A harbor for a second round of falafels and some snack buying at Pic N Pay. 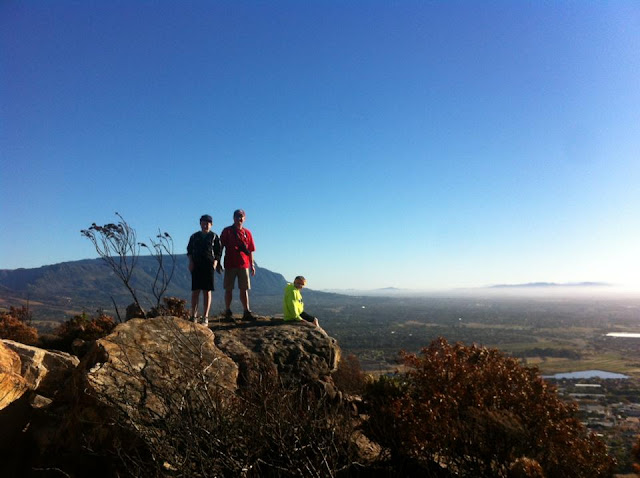 Photo of us waiting for a new bus courtesy of Nurul Azma. 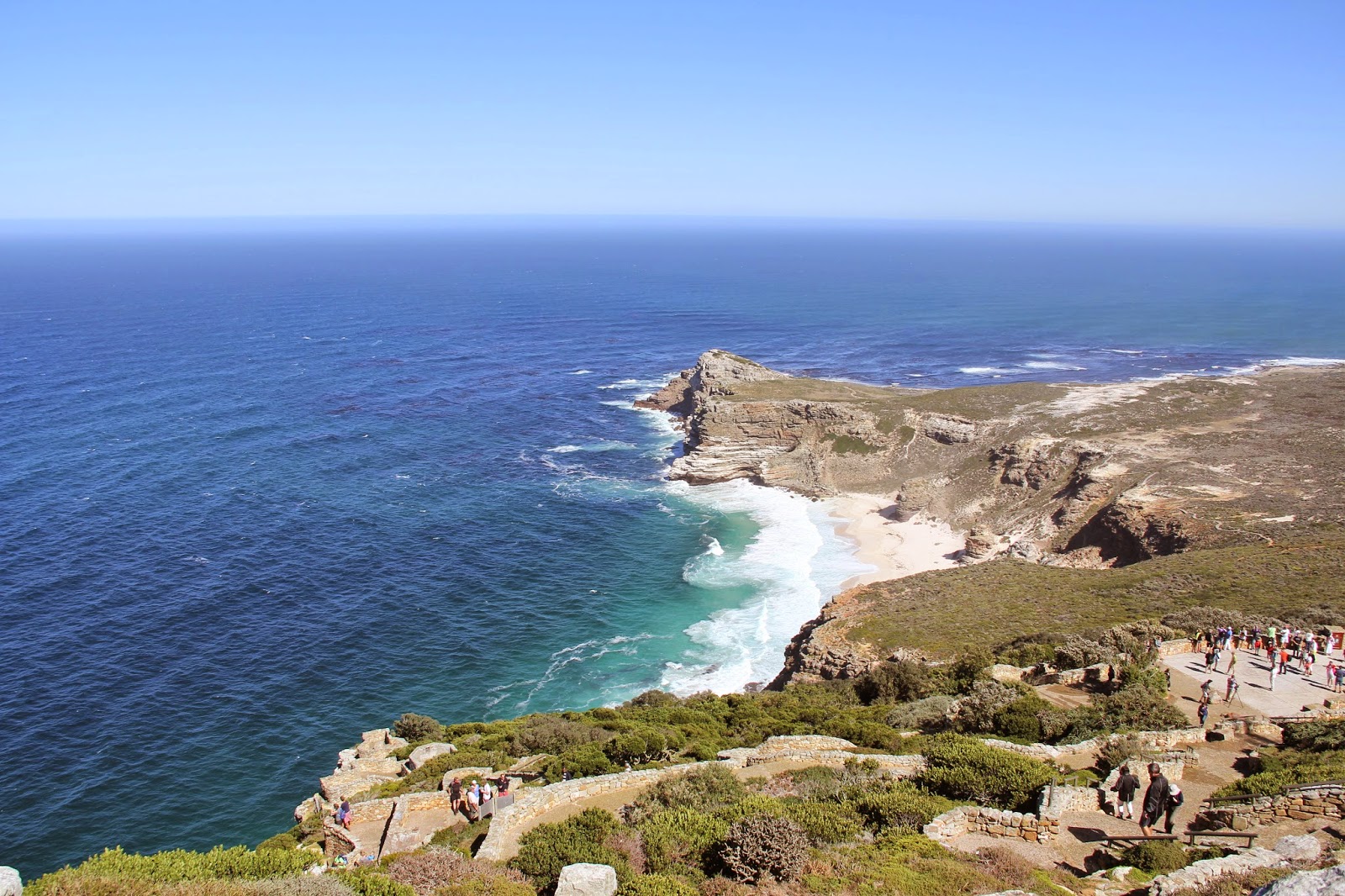 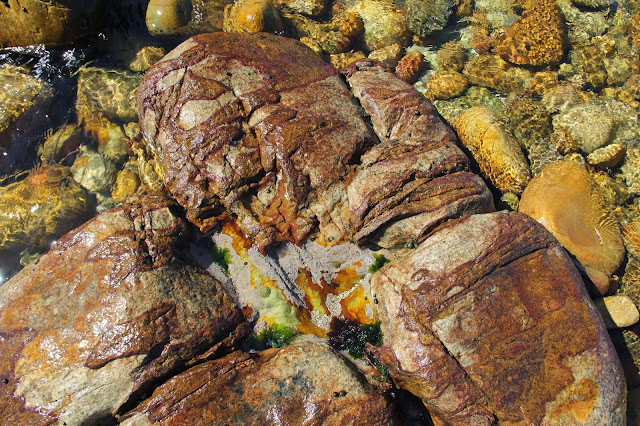 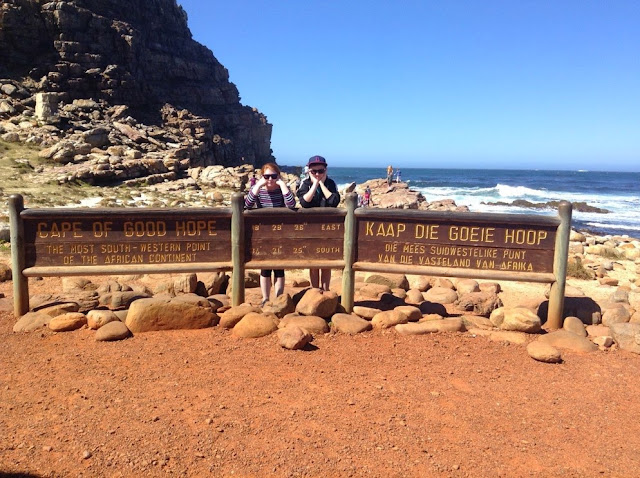 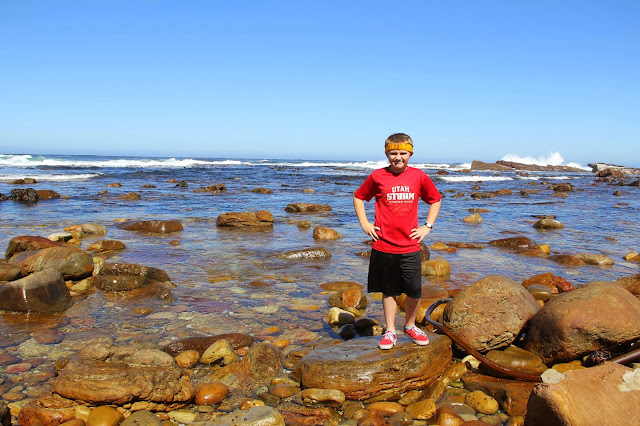 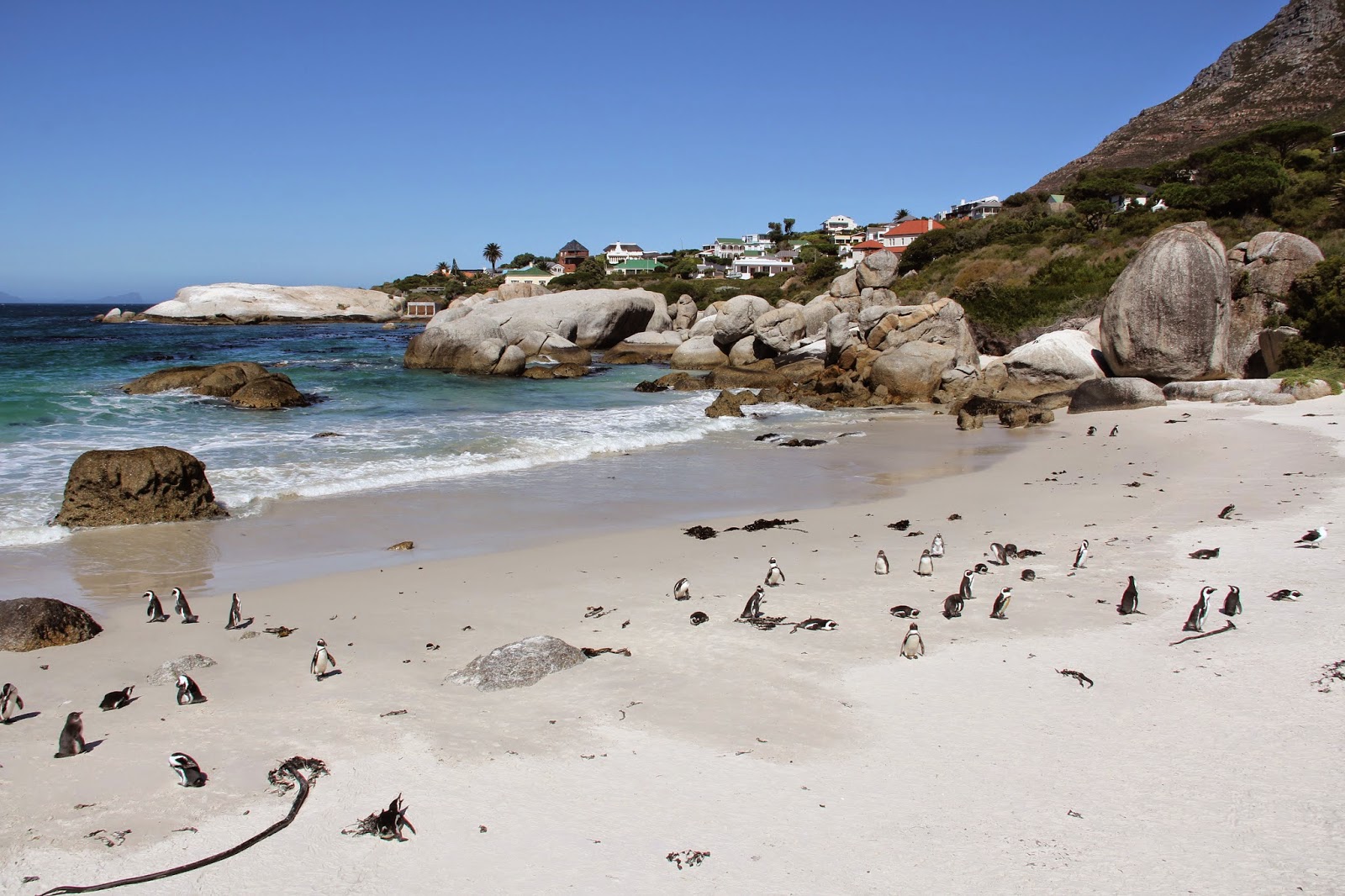 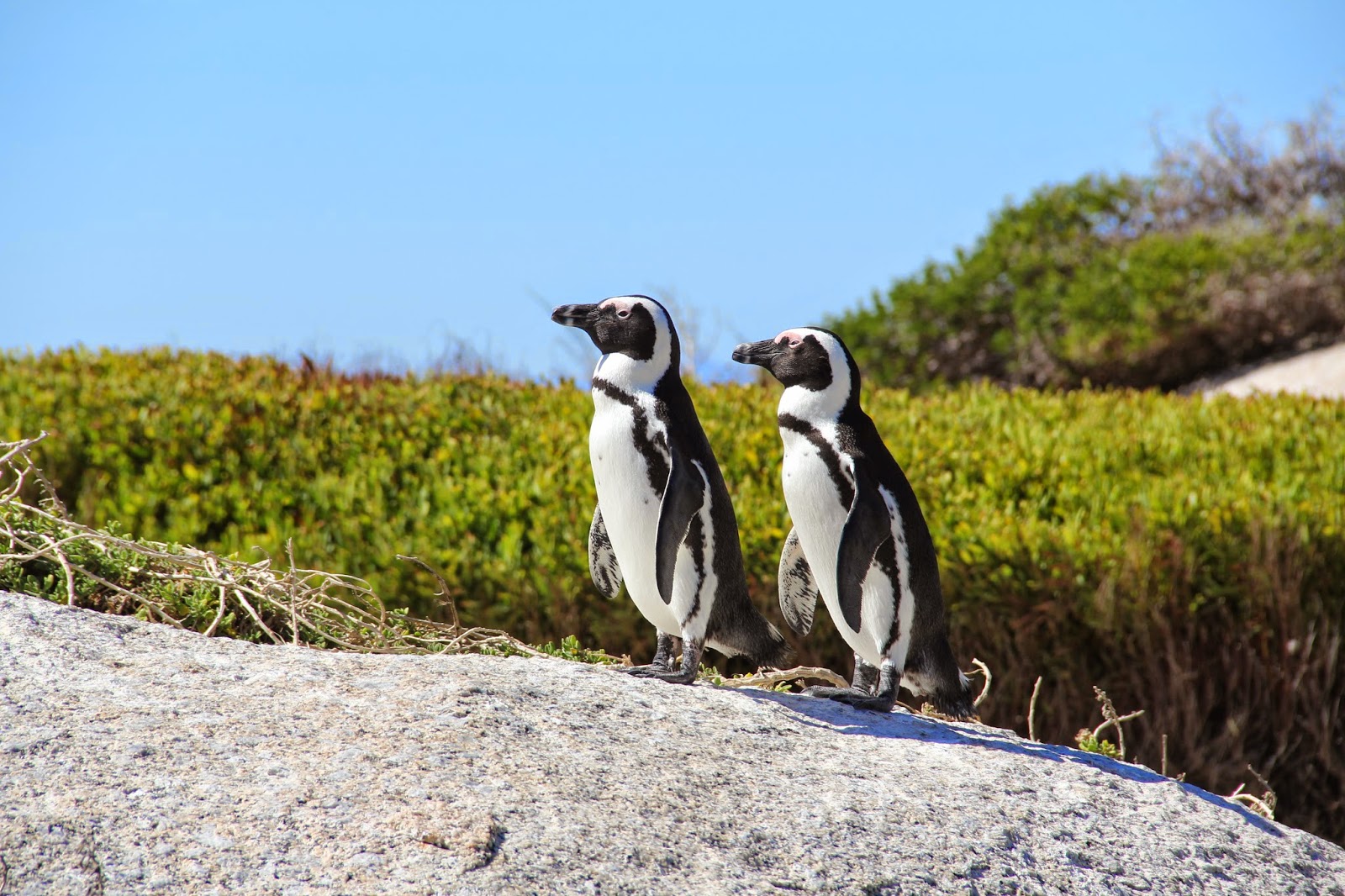 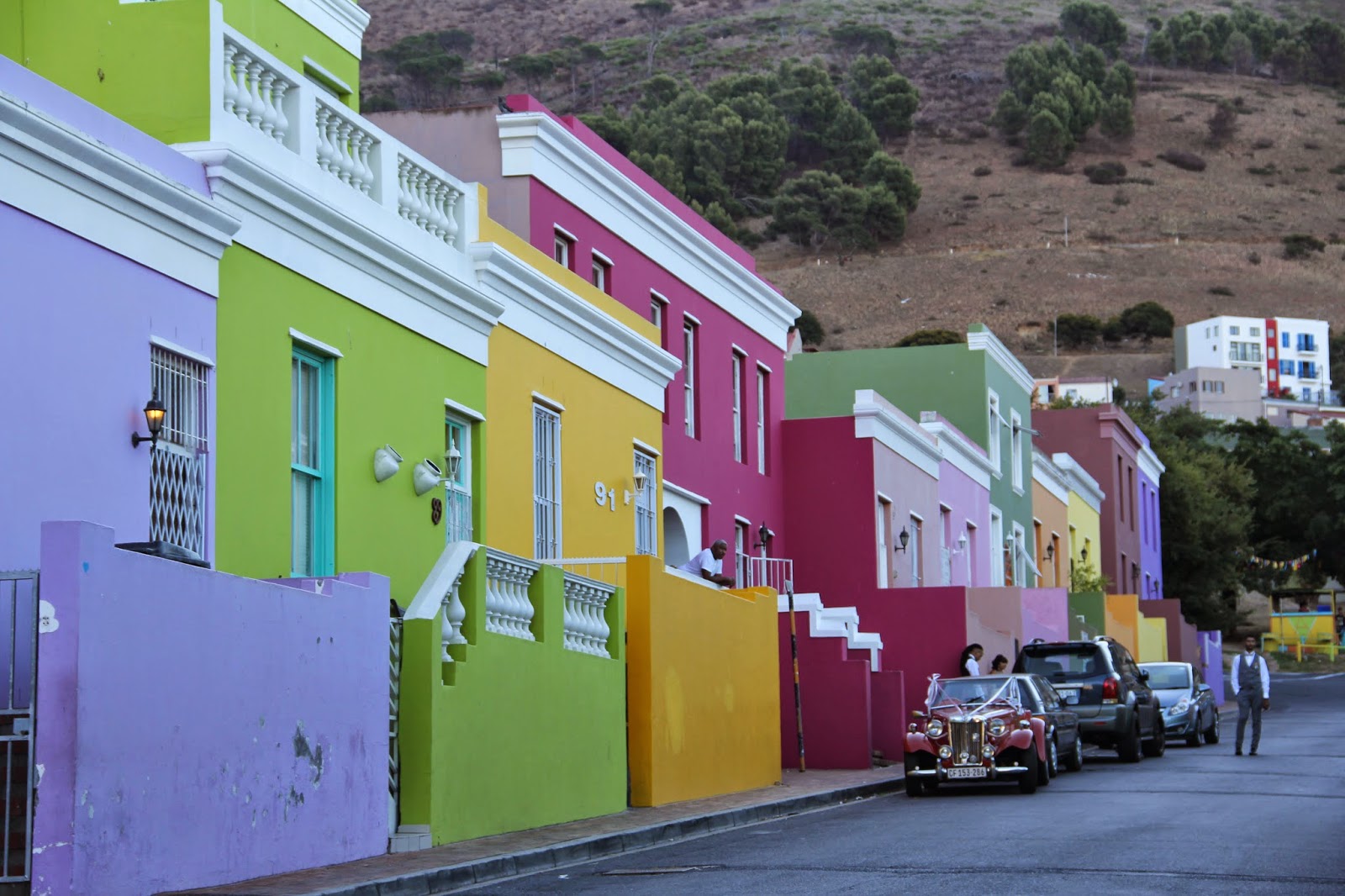 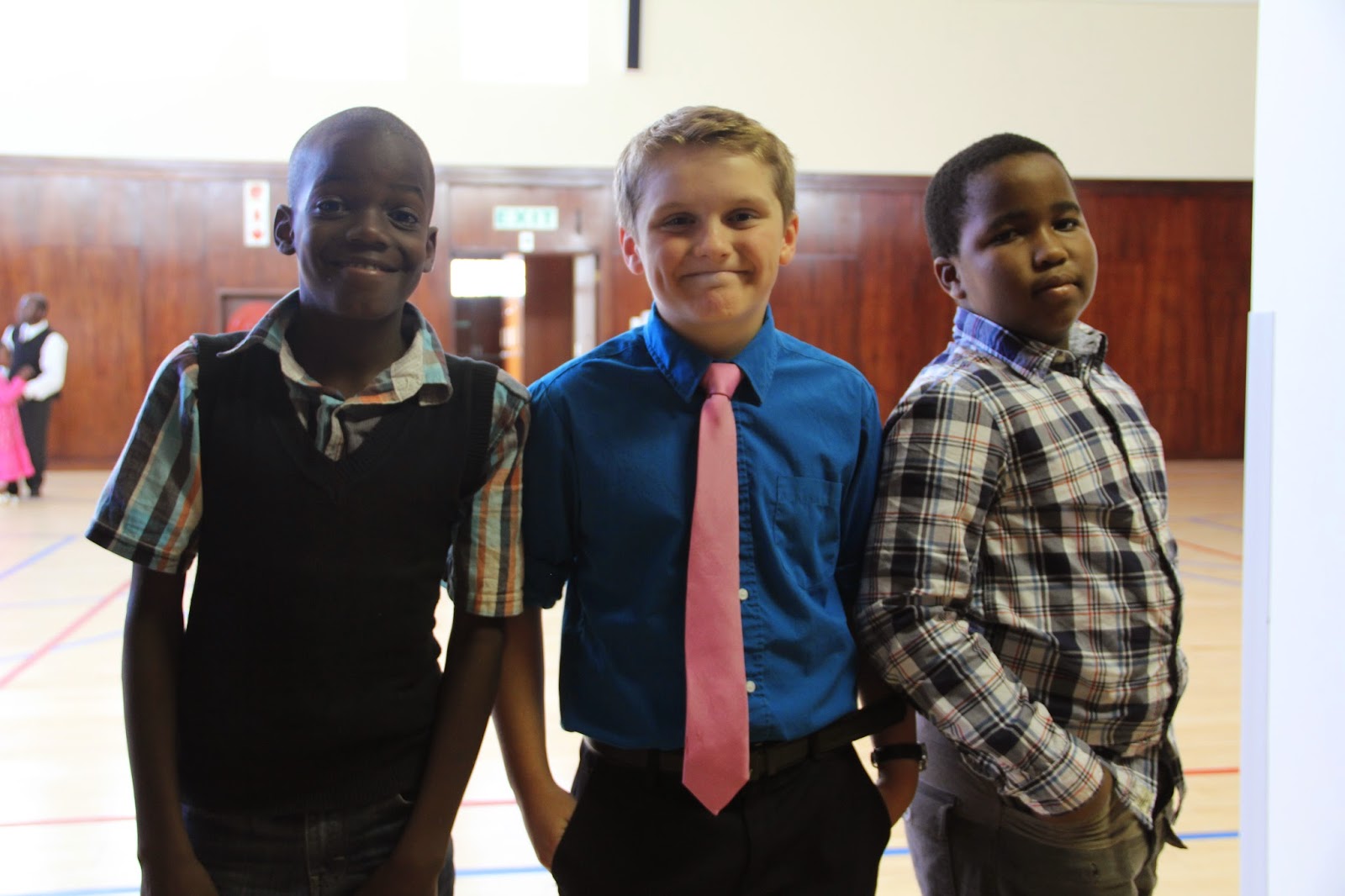 Day Five. We caught a cab to the Mowbray Ward in time for its 9-12 block of meetings. The chapel is located on the first piece of property purchased by the LDS Church in Africa over a century ago. It is located in the area to the northeast of Devil’s peak near the hospital where the first heart transplant took place and also near the University of Cape Town. The ward well represented the ethnic diversity of Cape Town. It was equal parts black and white. The member of the bishopric who conducted was of south Asian ancestry. Will was not too sure about going to primary so I told him I would go with him, but in route we met the nice primary president who put her arm around Will and walked him to a class of five black boys. Will was not fazed in the least and told me I could go. He happily participated for the whole two hours. Joel and Sarah enjoyed the youth meetings and noted that it was much the same as our home ward where some were more inclined to just sit and look bored while others were quick to get involved. Most of the children and youth in the ward were black. We caught another cab back to the ship for lunch and then changed clothes and headed out to conquer Table Mountain. The tram has a rotating floor which makes a compete rotation while ascending. That means that everyone gets a view out all sides. We enjoyed the views from the top as we walked around. Marie had decided she was not up to a hike down. I really wanted to do it but was hesitant to say so because the kids were also thinking they wanted to ride down and I didn’t want to pressure them. Sarah had already committed when we bought her a round trip tram ticket. The boys were still waffling. After our initial exploring was done, I noted that I was going to hike down and would meet them all at the bottom or back at the ship. Off they went and down I started. Then a few minutes later I heard Sarah call out and she came bounding down to meet me. She was worried I might fall off a cliff or something. Then Joel decided to join us. Will worried about his mom riding down alone, but in the end he too came to join us. Happy day to have all three kids join me. I had a general idea of where we should go, but no maps were provided and the posted directions up top were not always clear. In greeting my hiking companions, I missed the one critical map. We headed out and ended up hiking out to the far eastern point that looks down on Cape Flats. It was a lovely hike and a great view. We then hiked back to where the kids had joined me and from there we found the map and the arrow pointing to the ravine down. A hour had passed and it then took two more hours to hike down to the tram via lots of rock steps that gave our quads a work-out and reminded us all of the hike down Mt. Sinai. Marie was patiently waiting and not yet freaked out by our longer than anticipated descent. We treated ourselves to delicious pizza for dinner. 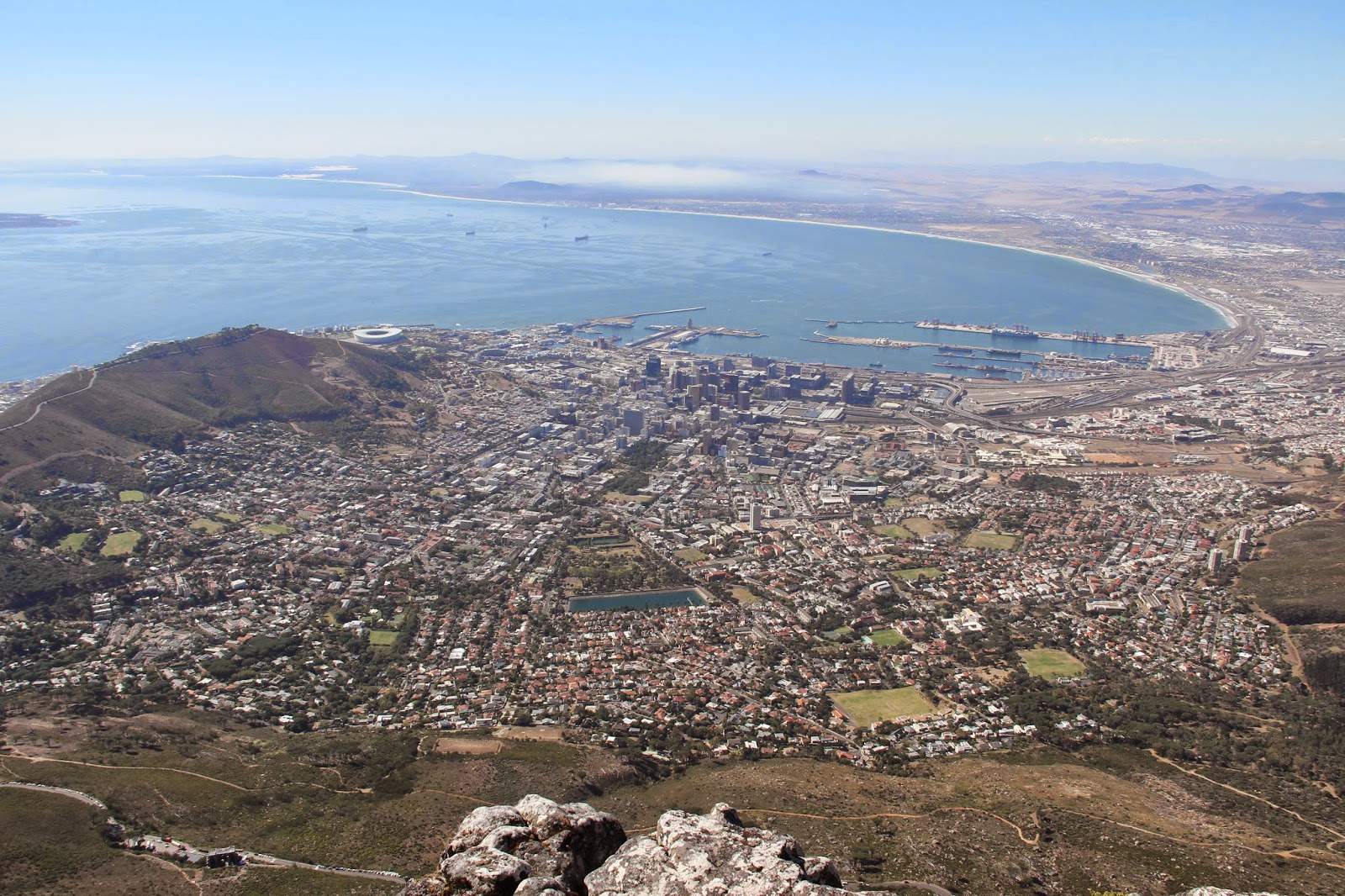 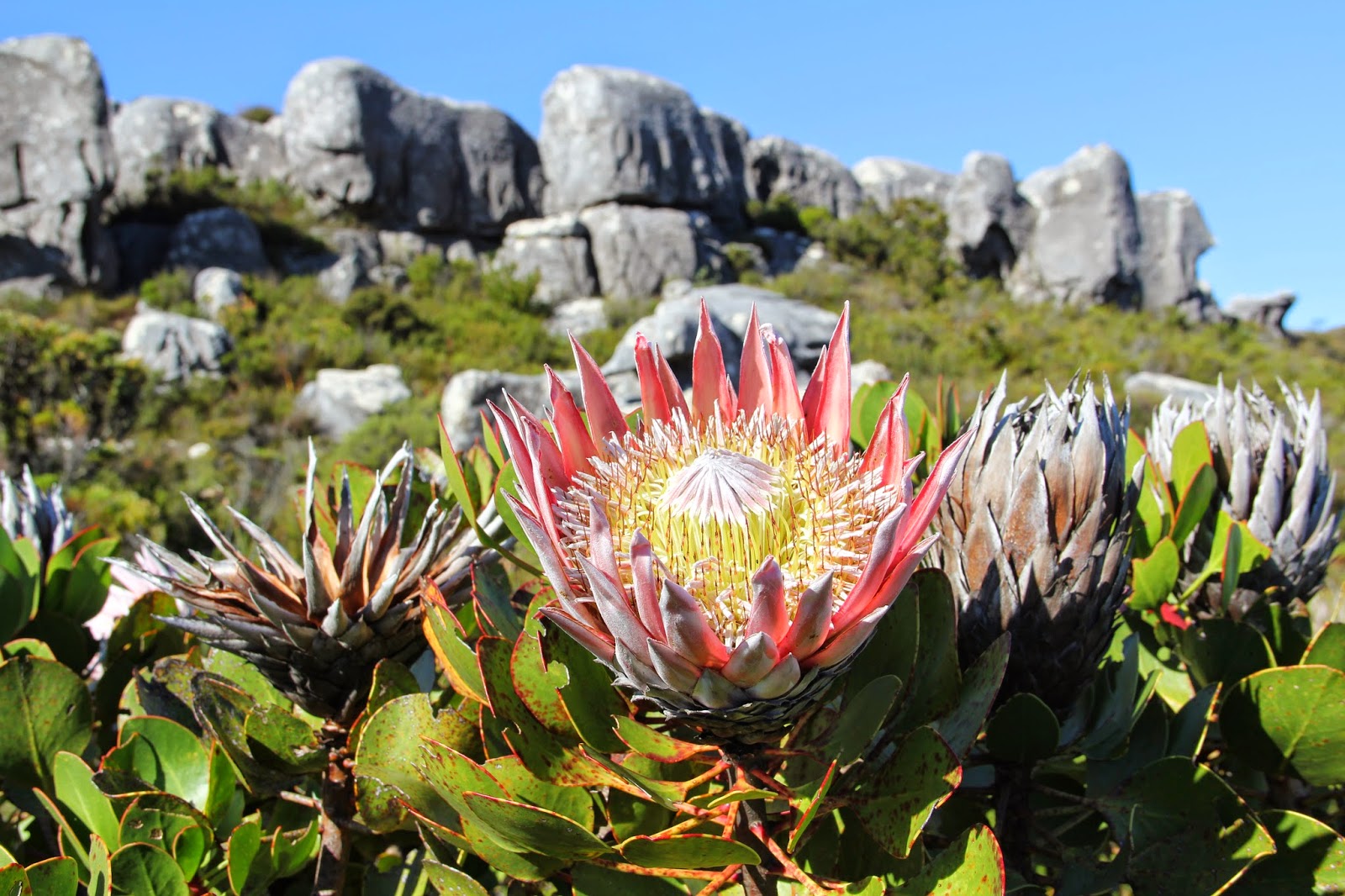 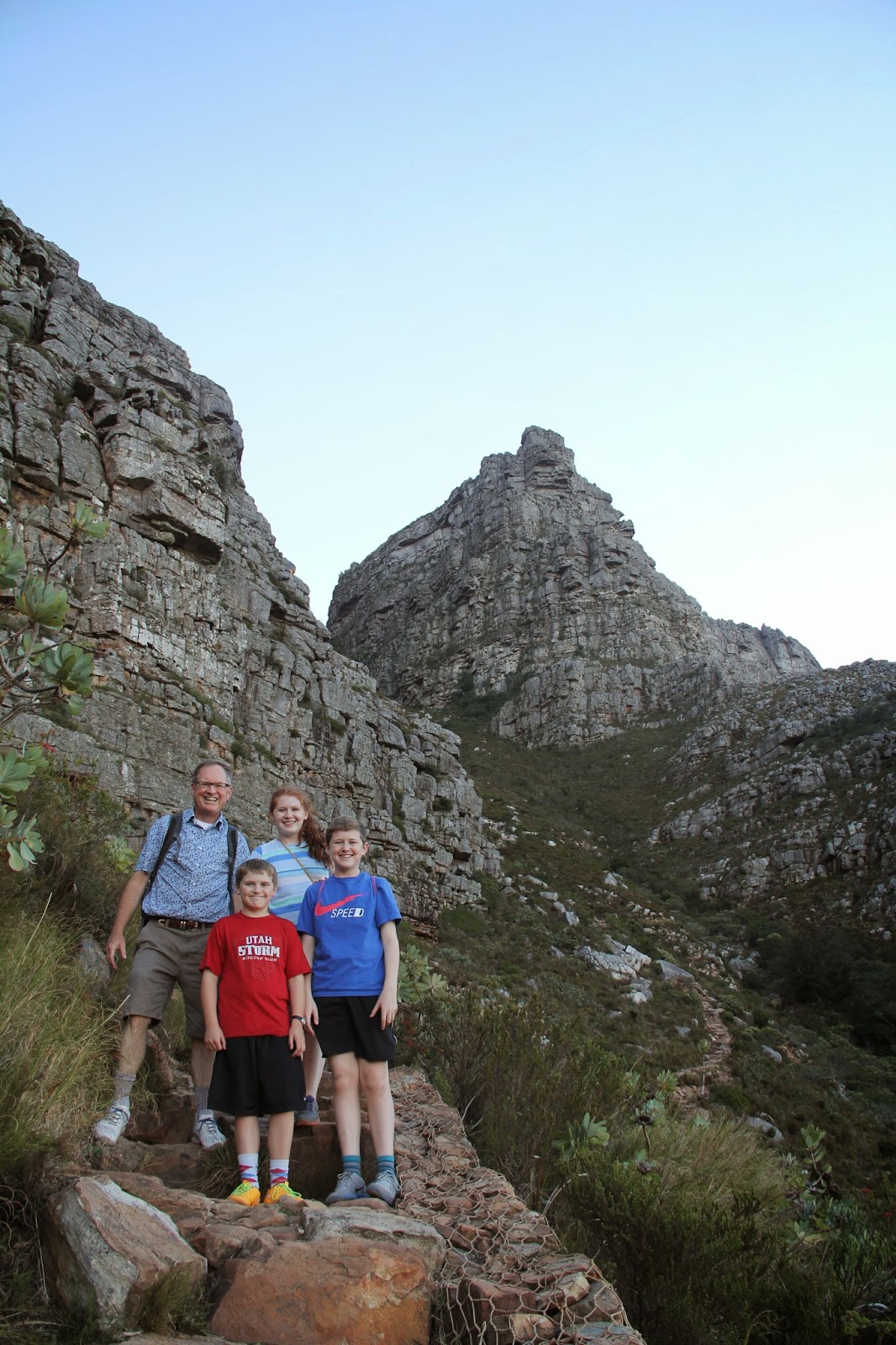