This was Joel's fourth soccer tournament in the warmer winter climes of St. George Utah (Ice Breaker) or Mesquite Nevada (Presidents Cup). Marie drove the boys down on Thursday after school so they could be ready for Joel's 10:00 AM (tied 0-0) game on Friday at the Mesquite Sports Complex. I drove down Friday after my classes (while they all shopped and watch Star Wars a second time) to meet them for dinner (Cafe Rio) and a comfortable stay in the Coral Hills Best Western.

Saturday morning we were out the door by 6:00 for the hotel breakfast and then on the road by 6:20 for the 40 minute drive to Mesquite Nevada (Pacific Time zone) for 6:00 warms up and a 7:00 game. It was literally Saturday Morning Lights in Nevada (as opposed to Friday Night Lights for football in Texas). 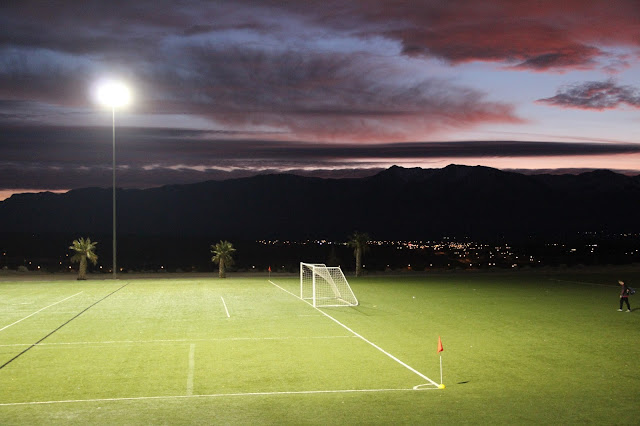 The five field complex (with three fields in AstroTurf) is high above the lights of the border gambling town of Mesquite--which was full up this day with a classic car show and soccer and baseball tournaments. 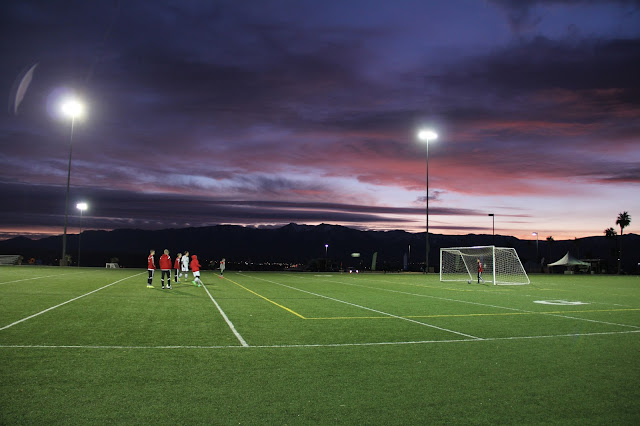 Warming up during an awesome sun rise. 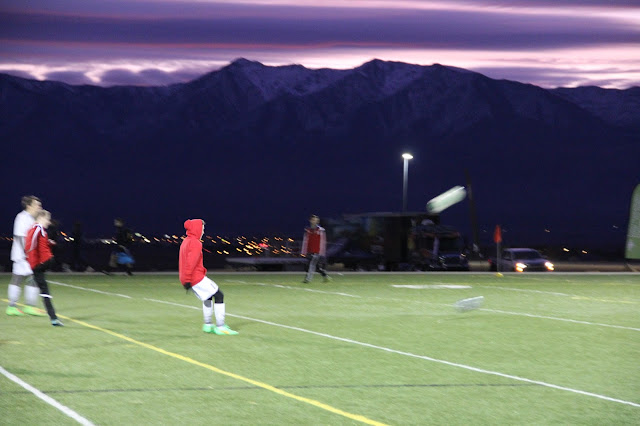 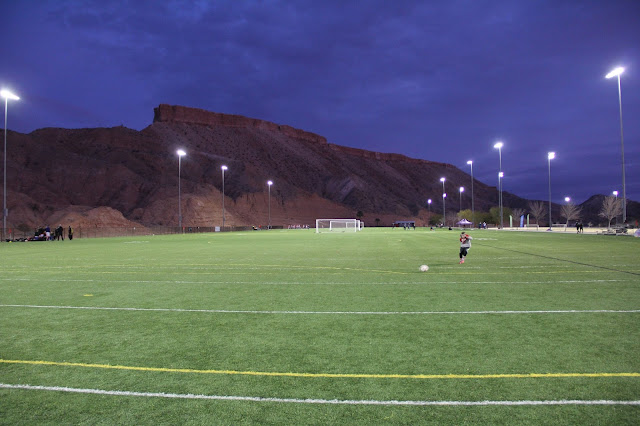 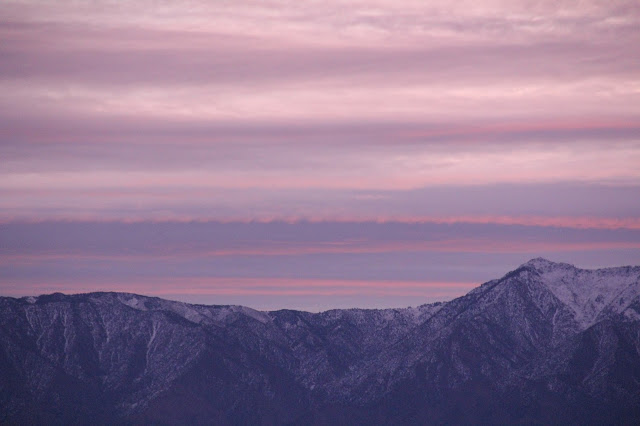 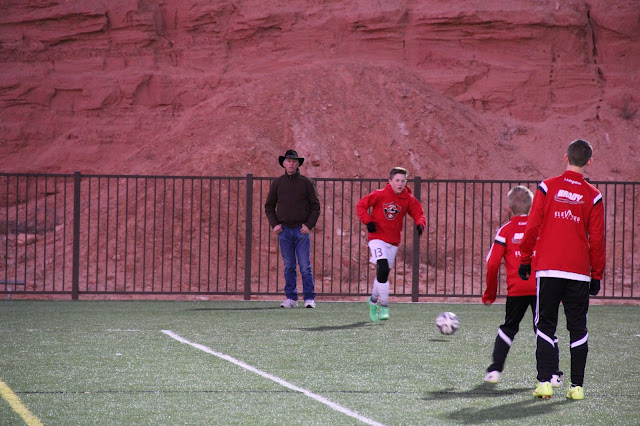 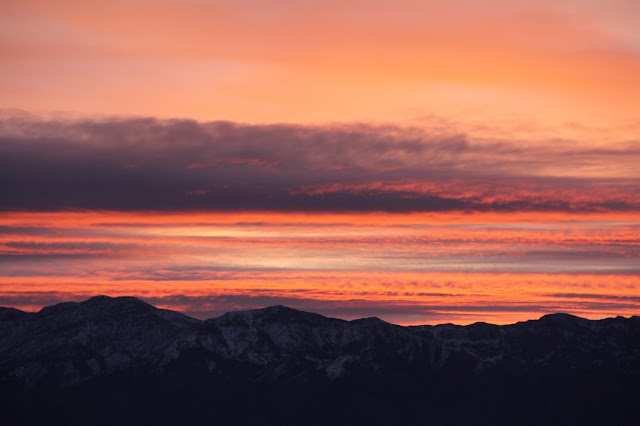 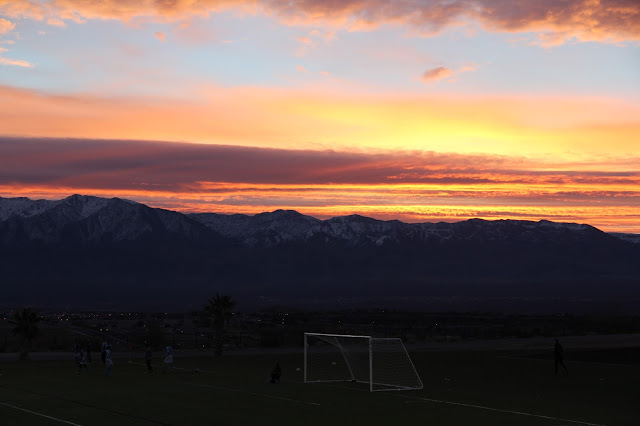 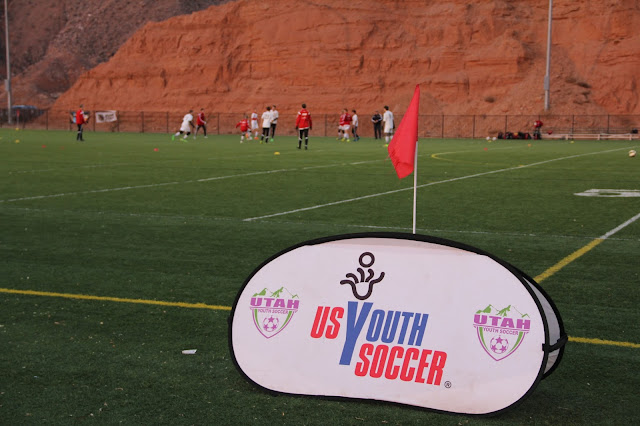 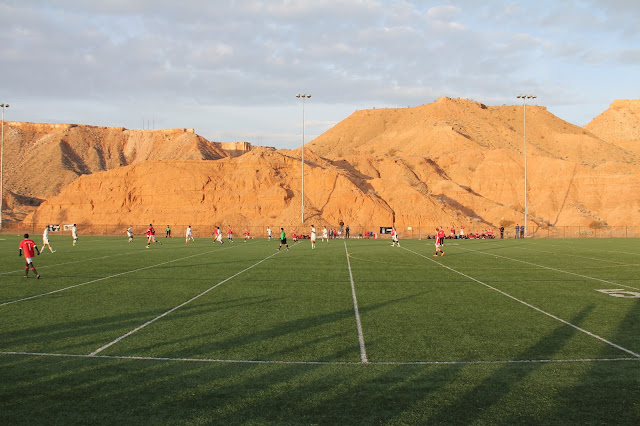 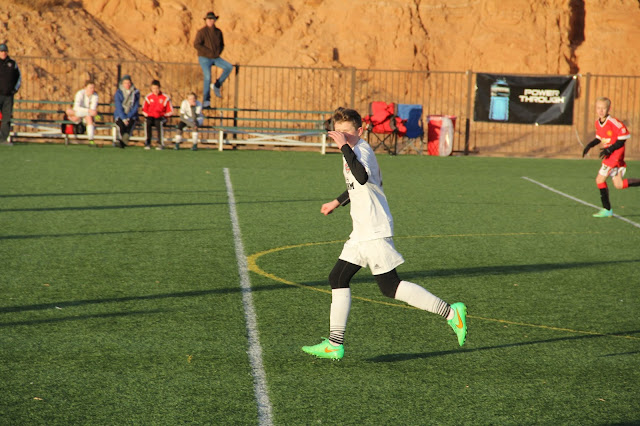 Here comes the sun (and a little warmth). 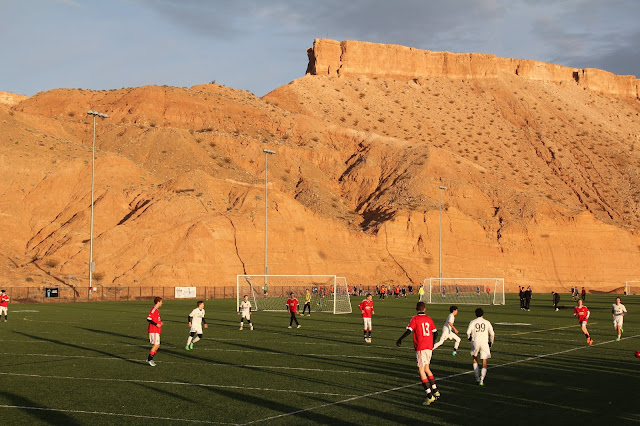 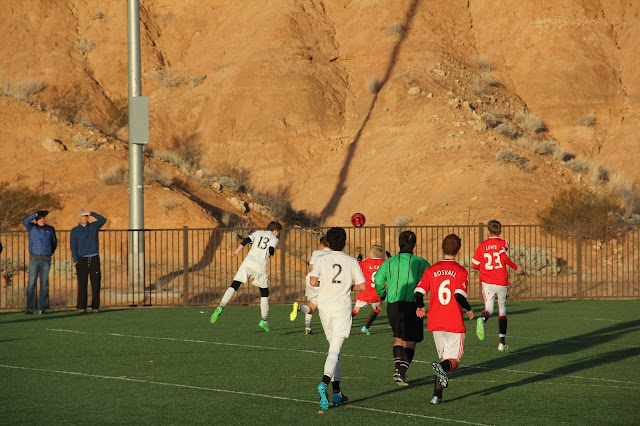 Nice Header by Joel (lucky number 13 and with green shoes) 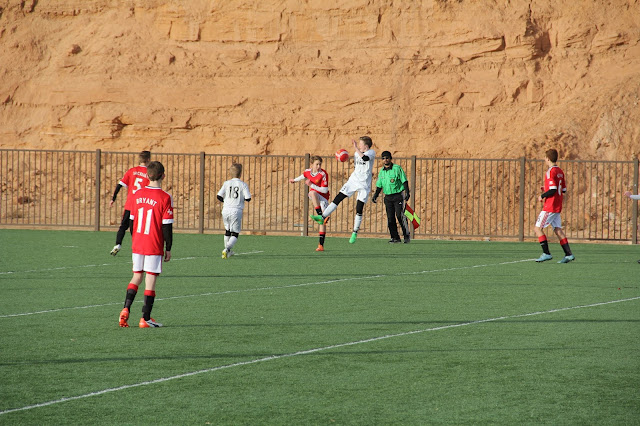 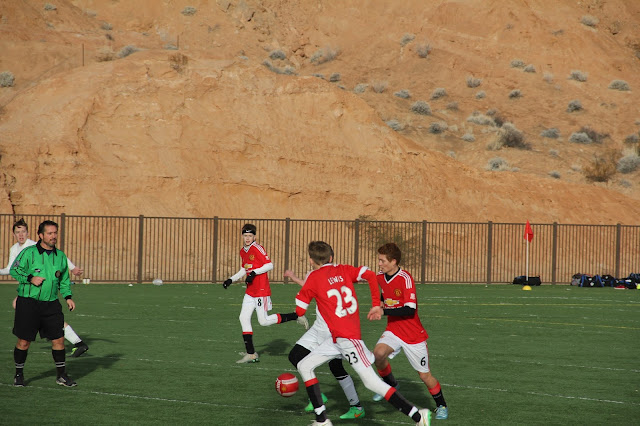 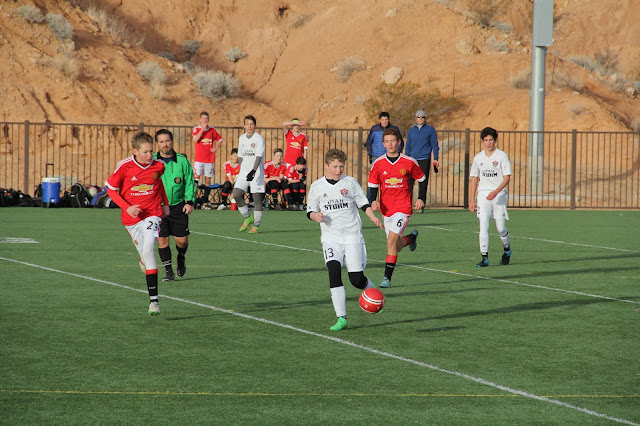 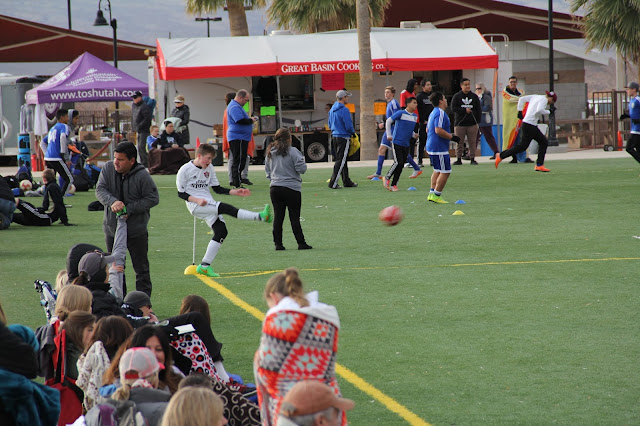 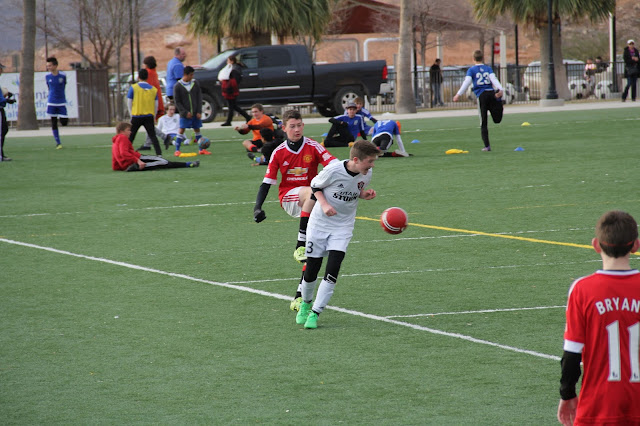 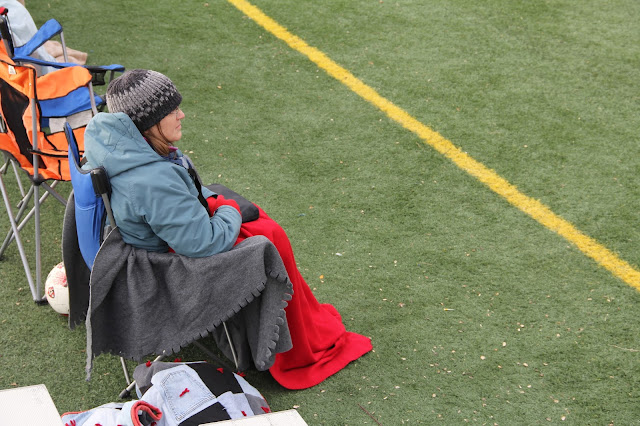 Joel's most loyal fan and occasional side-line coach. The game ended with a 0-4 loss. 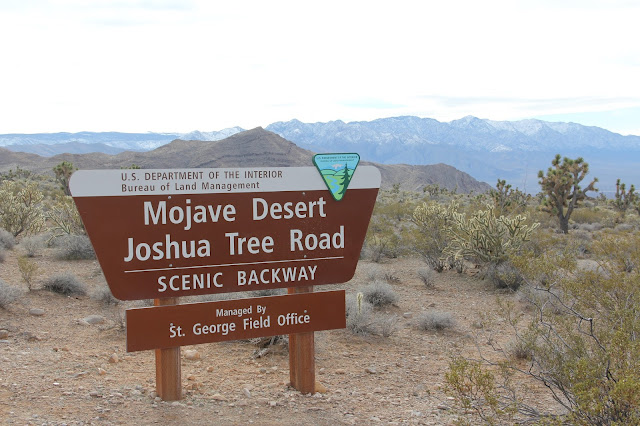 We had a five hour break between games (last tournament in Mesquite we spent between time in the public library, watching a movie and browsing WalMart) so we headed back to our St. George hotel to rest. I made an executive decision to do some exploring in route. Rather than taking the normal I-15 route through the beautiful Virgin River Gorge we took old highway 91through the Shivwits Paiute Indian reservation, Ivins and Santa Clara. This once was the main road from St. George to Las Vegas, but now it is a road less traveled. When we passed this sign, I couldn't help but do a little off roading. Unfortunately this backway did not show up on my detailed Utah atlas or on Google maps so there was hesitancy by some to see where it would take us. I drove far enough for us to see some nice Giant Joshua trees. If I'm not mistaken this is about as far north and as high in elevation as they normally grow. As the road climbed up to the reservation the Joshua Trees soon disappeared. 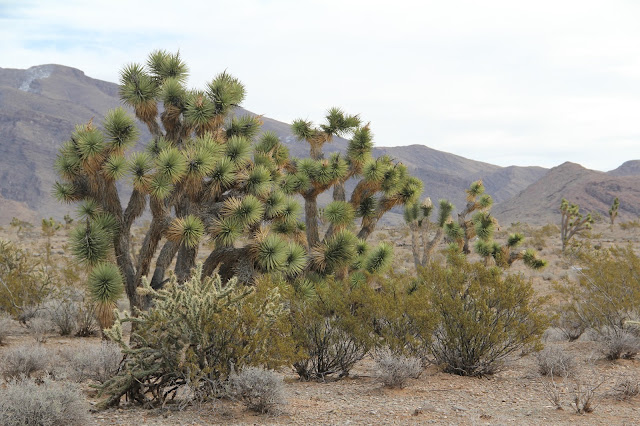 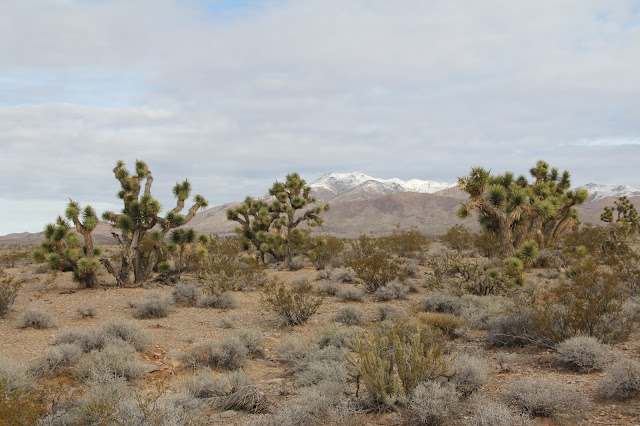 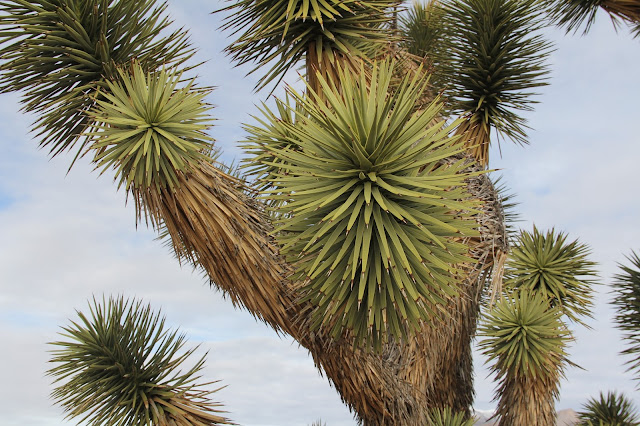 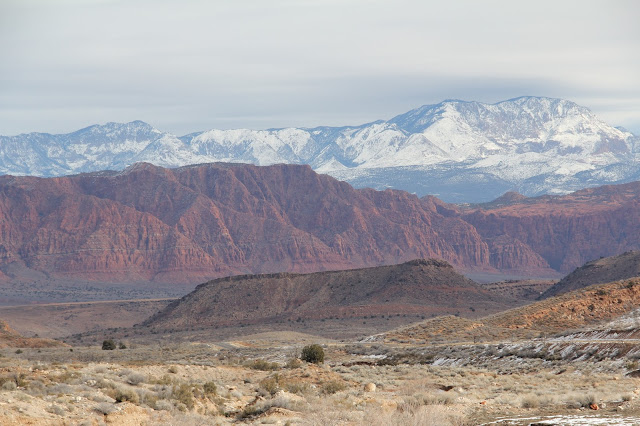 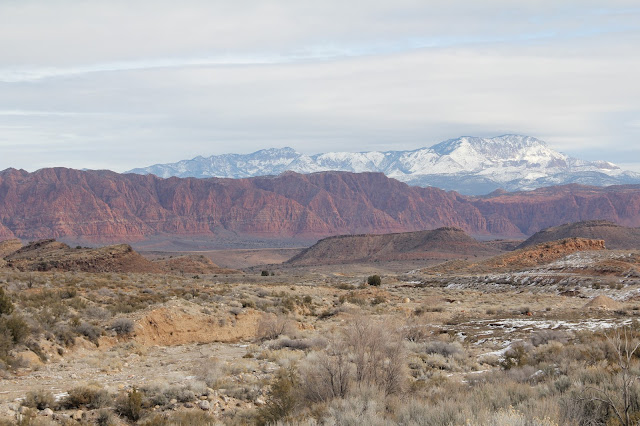 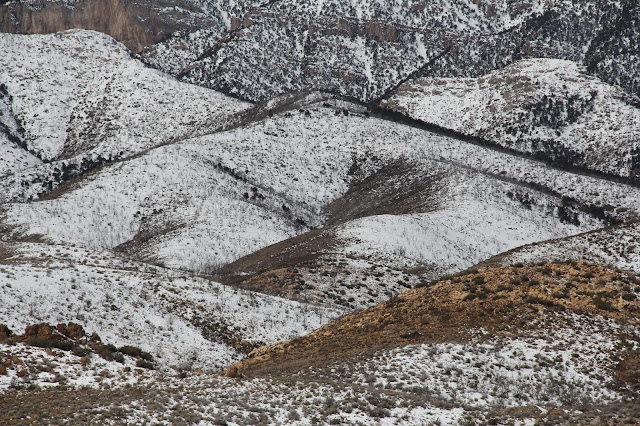 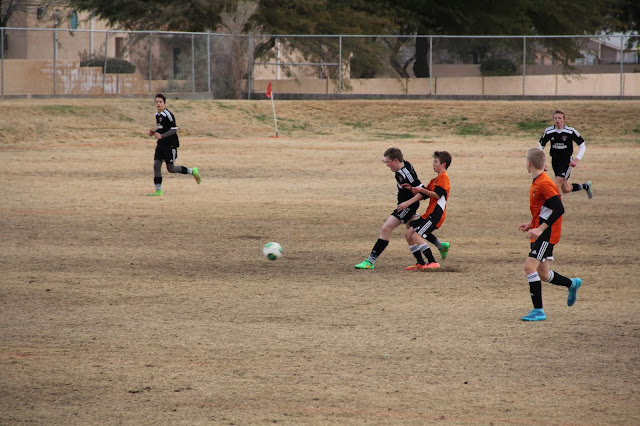 The second game was in a city park on an unwatered pitch. 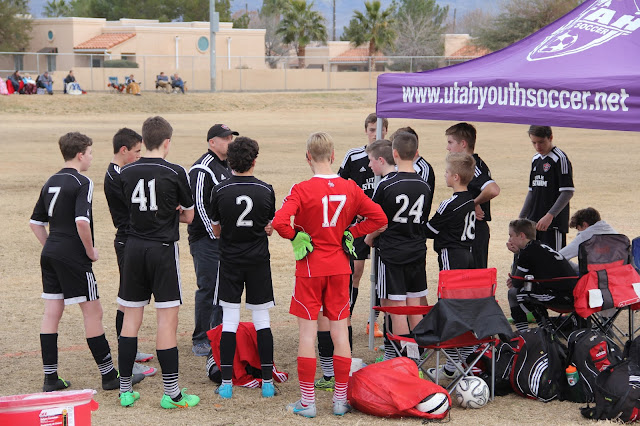 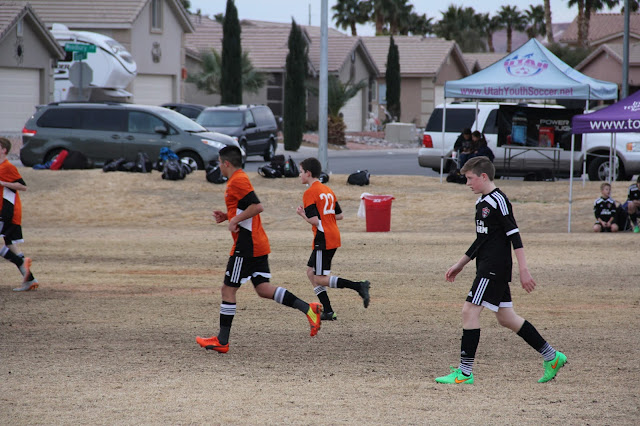 The look on hard-working Joel after the opposing team (Murray Max) scored its fourth goal. 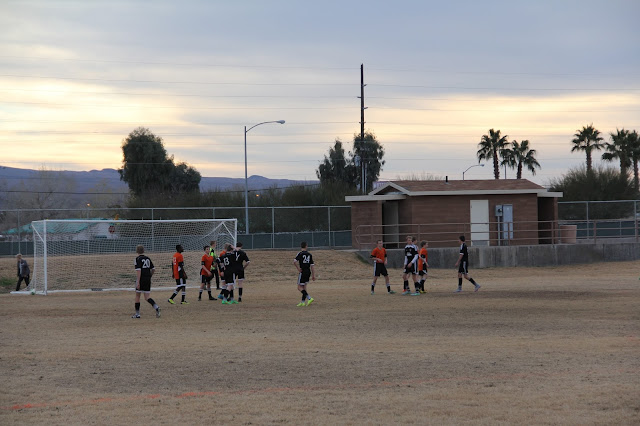 Lining up for the final corner kick not too long before sunset. With another 4-0 loss, Joel's Utah Storm team did not qualify for the finalist matches on Monday so we opted to drive the four hours back to Springville hoping the forecasted snow storm would not be too bad. Dinner was a stop in St. George for a thick milk shake from Nielsen's. Snow started falling at Nephi and before long it was slow going on snow packed roads. Marie and Joel were in the van with Will and me following in the Subaru. Maire wanted me to lead the way, but I worried that if I led then she would feel obliged to keep up with my more-comfortable-with snow-driving-pace so I told her that she needed to set the pace at a speed she was comfortable with. That she did and after a tense (mostly for her) last hour of driving we all arrived home safe and sound. Looks like Monday will be a ski day.
Posted by chad at 6:42 PM