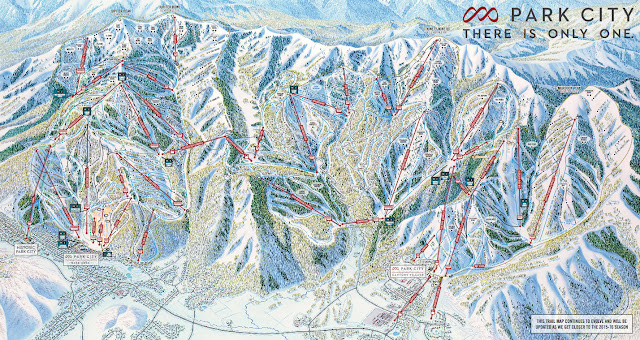 BIG, that is the one word I would use to describe the new Park City. Biggest ski mountain in the USA (41 lifts, 315 runs, 7300 acres) with its merger this year with The Canyons (formerly know as Park City West--opened in 1968, Park West, and Wolf Mountain). The merger means the Yeti pass in now for 14 resorts instead of 15--last year the Canyons was a separate pass. Big base--which involves lots of walking and climbing, particularly if you don't know for sure where the ticket office and rest rooms are. Big lifts--including six-seaters which we learned are called Six Packs (why not hexs, after all there are quads?). Big lodges. Big prices ($13.25 for a burger and $107 for a day pass). 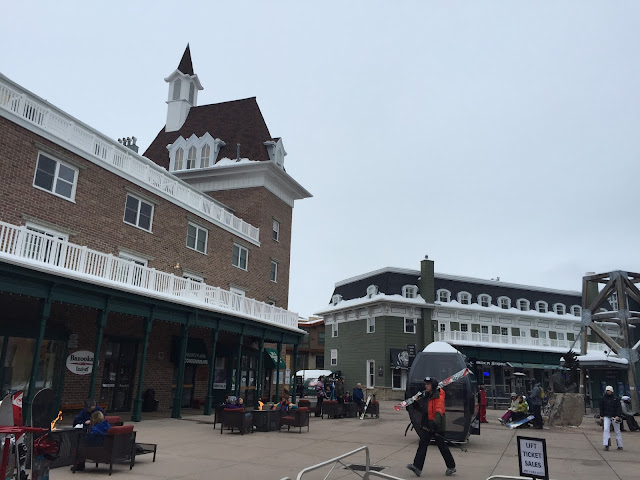 It took a while to get our passes. The nice agent had not yet processed Yeti passes so he needed help from his supervisor. Then he needed to input our names, address and birth-dates and then he needed to print out the plastic passes and write our names on each one. At least this way when the lift attendant scanned our jacket with her reader, she was able to call us by name (a nice touch). I asked if my birth date came up too on her reader and she said if it was my birthday the scanner would start singing  "Happy Birthday." Cute. This is not tiny, folksy Nordic Valley. 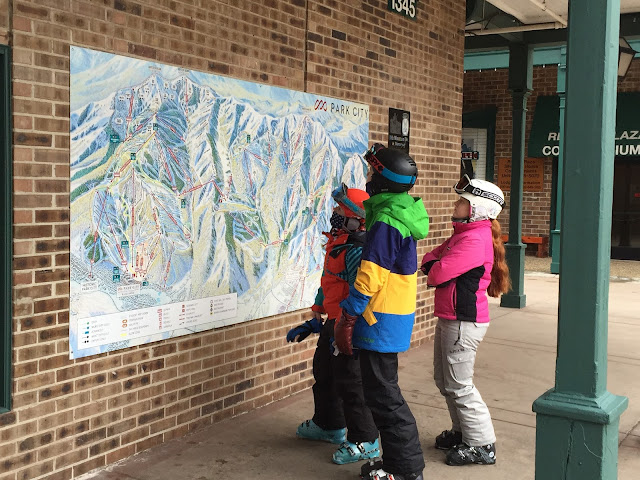 Checking out the vast terrain while I waited for tickets. 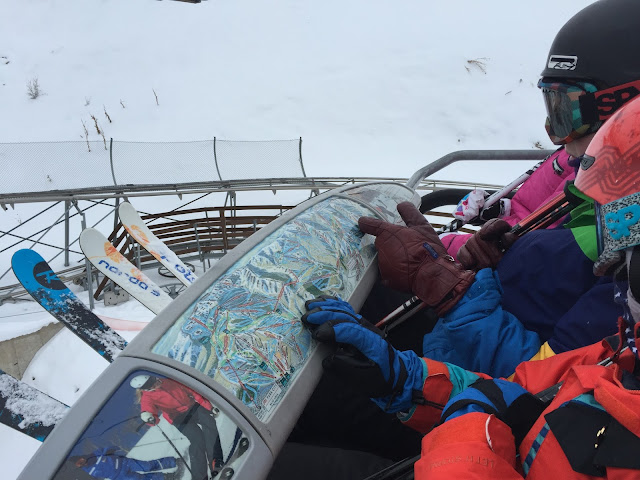 Some lifts had maps on the pull down bars. A nice help. We often ended up pulling out the thicker than usual trail map in my pocket to see where we were going. Sometimes we just opted to start skiing down hill and see where it took us. We also asked a mountain guide how to get back to the gondola and we asked a nice hex mate from SLC how was the best way to wend our way back to the base--he skied along with us to show us he favorite back route to a nice double blue that led to the base. 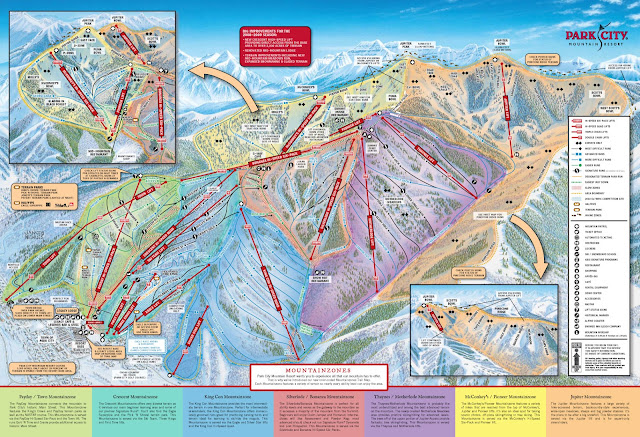 We started out riding the Crescent Express and then traversing over to the McConkey's Express. It was blowing hard and snowing on the summit. We enjoyed our ride down Tycoon.  We next rode Pioneer up and from there we headed down The Hoist to the base of Thaynes Lift. The Hoist was a real black diamond--steep and moguled with some bare patches of grass or rocks in the troughs. We rode Thaynes lift back up and came down Double Jack, another black diamond. We then followed the slow and easy Thaynes Canyon to the Motherload Express. At the recommendation of a skier on the Hoist, we gave Glory Hole a try. It was better groomed and easier on the knees. We then took the second half of Thaynes Canyon down to the base of King Con Express. We had a nice ride down big and wide King Con to the new Miners Camp lodge for lunch. It was a full morning of tough runs. Our legs got a work out. 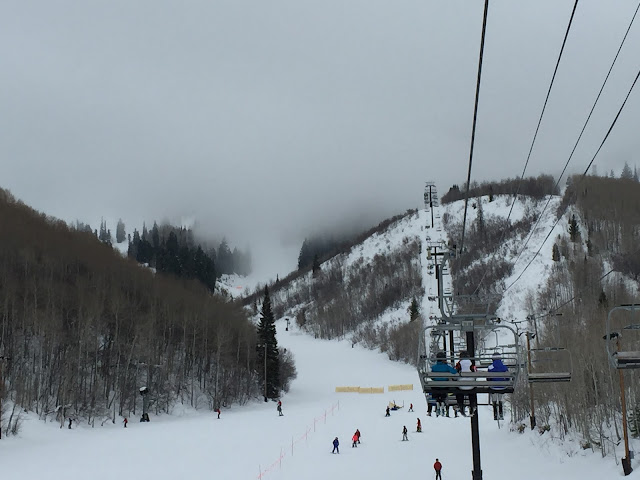 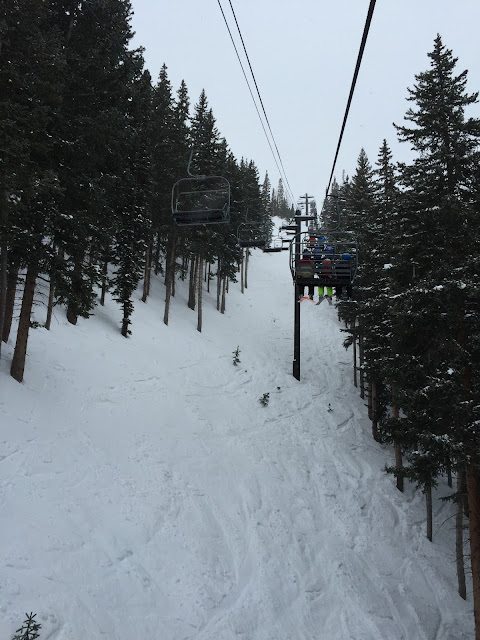 McConleys Express. We got to watch a paraplegic in a sit ski board the lift two chairs in front of us. Park City has a center that accommodates (including guides and aids) all kinds of handicapped skiers. 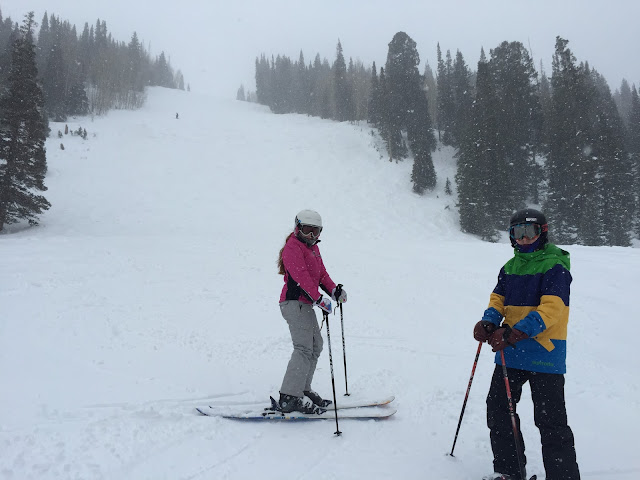 The Hoist. Steeper than it looks. 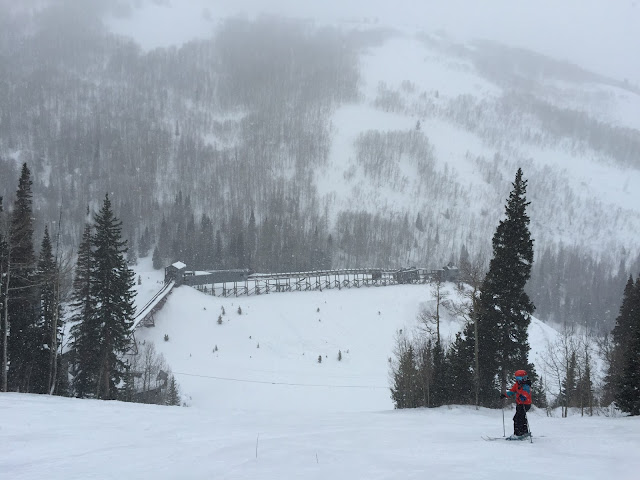 Old mining works at the bottom of The Hoist. 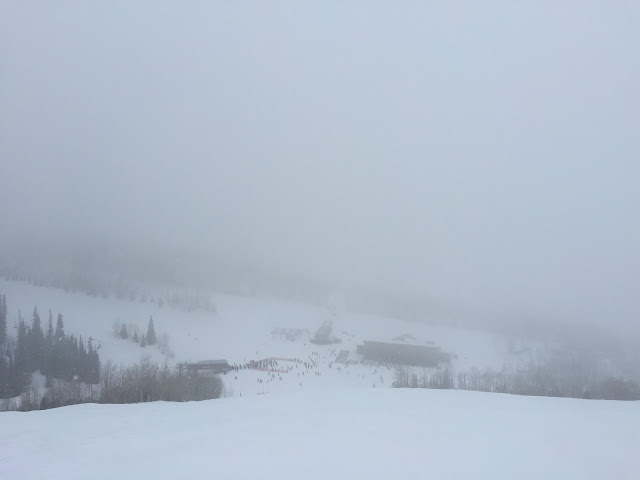 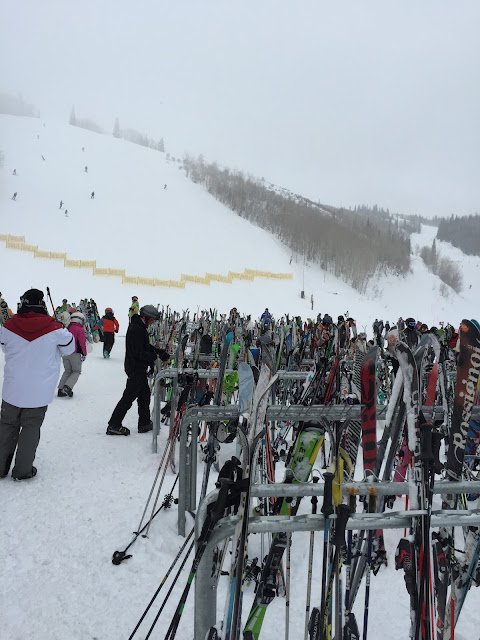 Biggest ski parking lot I have ever seen. 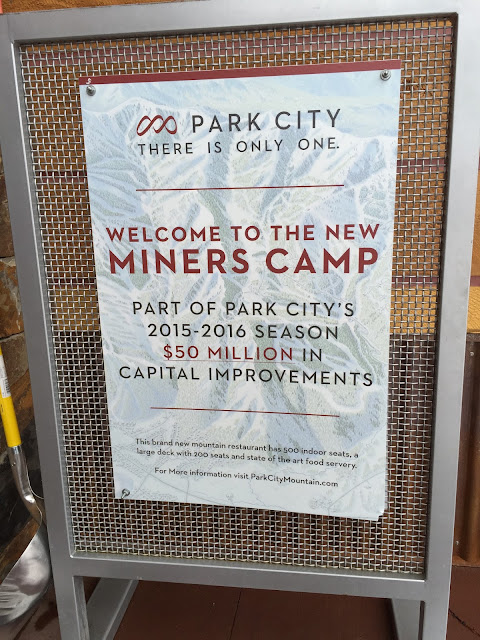 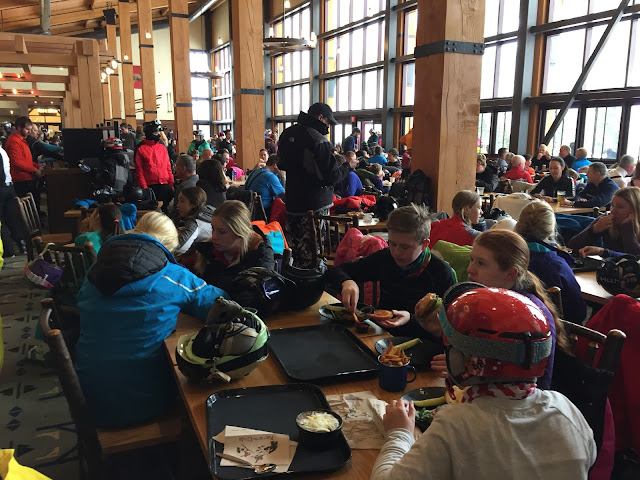 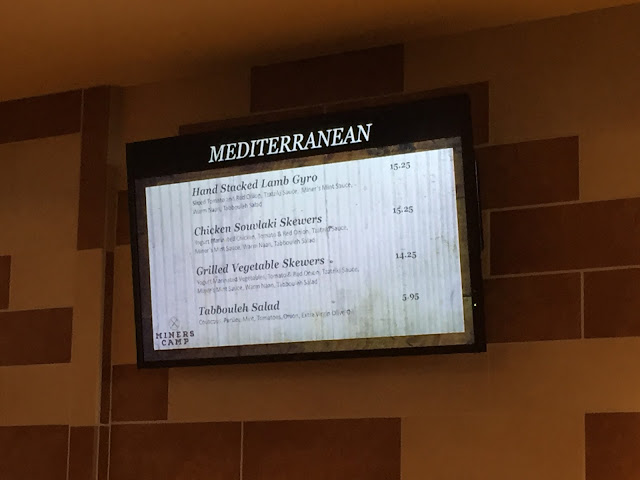 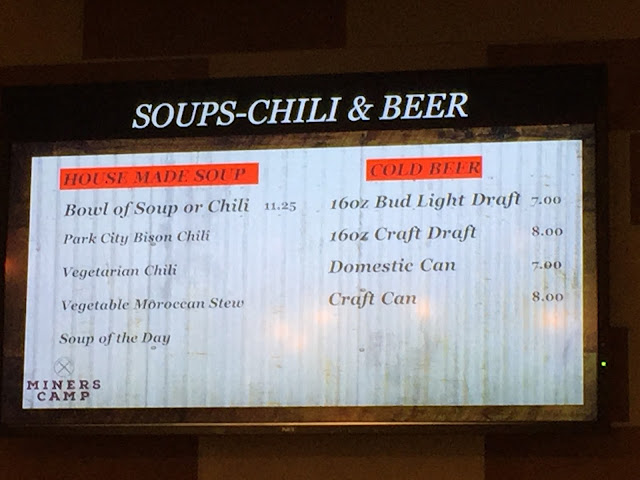 Pretty fancy fare was served up. The Moroccan stew was tasty. The kids enjoyed burgers. I ate their dill spears. 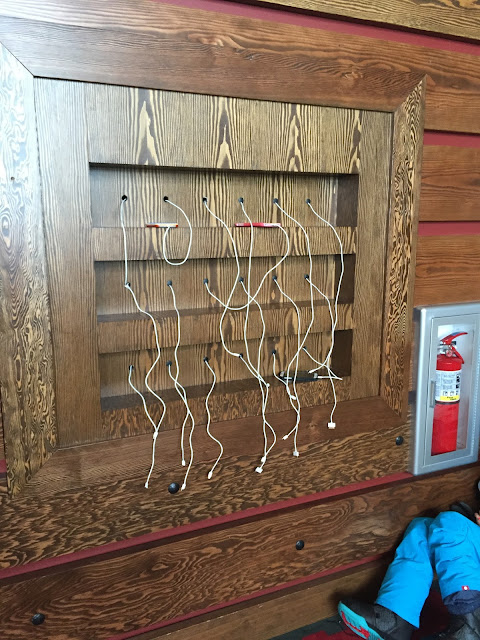 Charge while you eat. 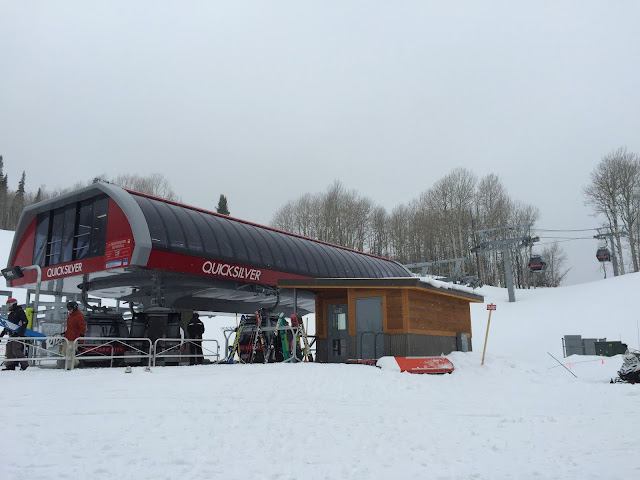 After lunch we rode the new Quicksilver Gondola over to the Canyons part of the resort. 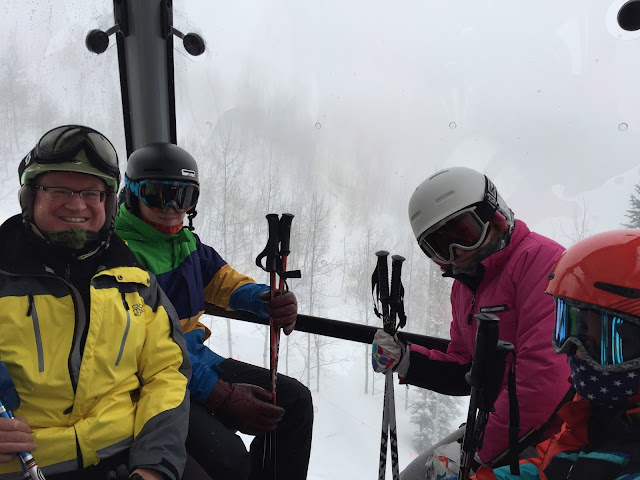 Photo taken by a nice man from Dallas. 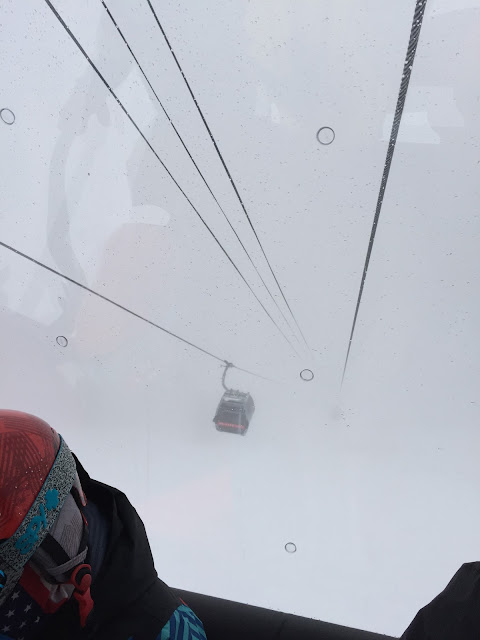 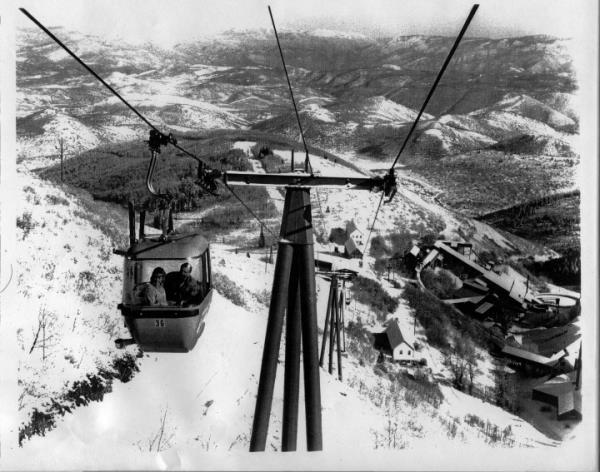 Park City opened as a ski resort in 1963. Soon there after the John and Norda Emmett family and several other families from Logan (including the Vern and Emma Ray Eyre Family) headed south for a day of skiing. I think Park City may have been my first resort other than Beaver Mountain. Back then a long ride in a four person gondola took skiers (snow boarding didn't exist back then) to the top of the front mountain. I can still remember the long ride down the mountain at the end of the day past the still in place mine entrances. 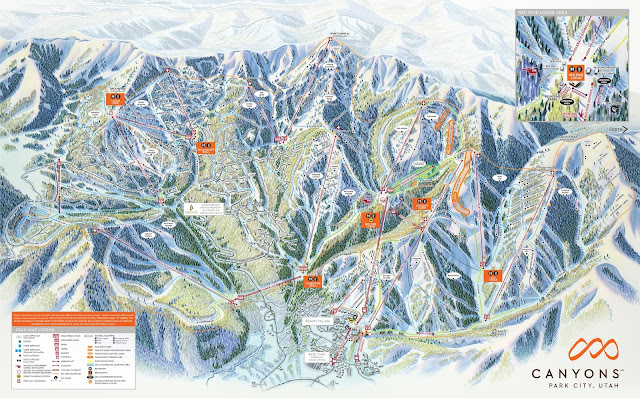 We knew we would not be able to cover it all so we stuck to the three eastern lifts (left of map): Dreamcatcher, Dreamscape (both of which accessed terrain that was interspersed with cabins, condos and roads--nice for people who like to ski out the door, but I prefer not having to ski along side, over or under roads) and Iron Mountain Express, our favorite. We asked a mountain guide at the top what run he would recommend and he suggested Mercury. It was a hit. Not many moguls, a fresh covering of today's snow, lined with white pine forests and not too many people. We skied it three times in fast GS turns. Nice. 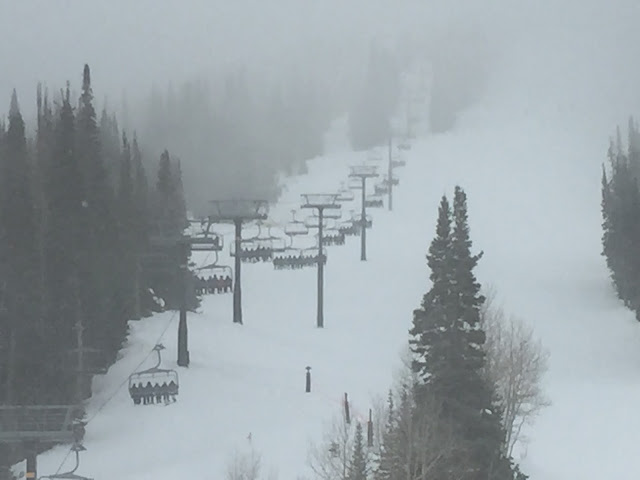 We rode the gondola back (there is not a skiable link between the two resorts) and enjoyed two fun runs from the Silverload Express down Prospector. By now the wet snow had picked up. We then headed back to the base via Silver Queen and Homerun. We had time and legs for one more run so we gave Payday Express a try. King's Crown was a fun, easy run.

If I were an wealthy easterner flying in for a week of Utah skiing and wanted to stay in one place, big new Park City certainly could keep one entertained for days of exploring on varied terrain. For locals, however, it would be frustrating to pay so much for a ticket and then only be able to ski less than 1/2 of the mountain in a full day of skiing.

If I were a local dad, I would hope that my children would not stay up past midnight reading a delightful book on the night before a big day of skiing resulting in a grumpy start to the day, nor that they would start lobbying for an early departure so they could go home and hang out with friends. Just sayin'. 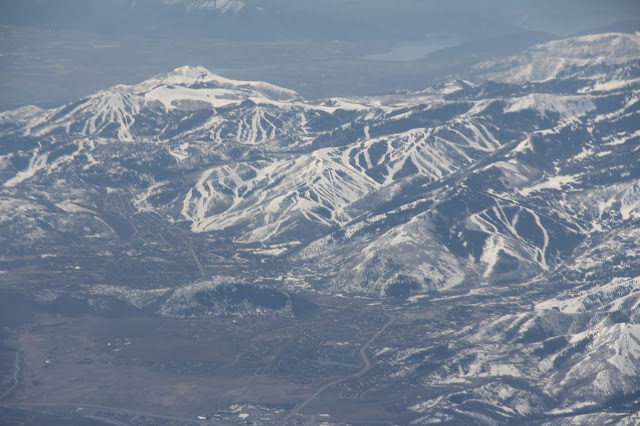 April 2014 photo of Deer Valley (upper left) Park City (center) and part of The Canyons (right). Our favorite run Mercury is the clear cut run down through the trees on the far right. 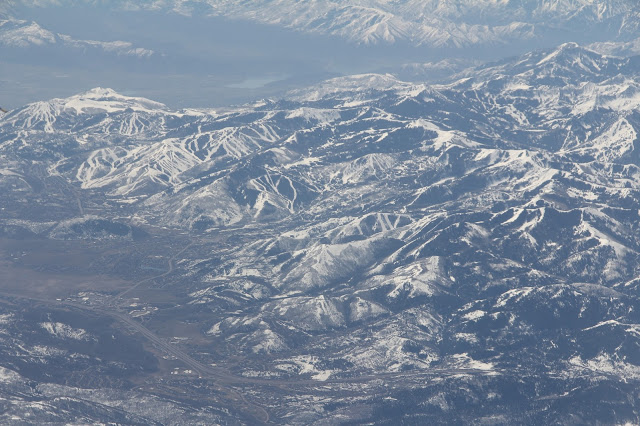 A broader view of the Park City resorts, olympic park, with the Cottonwood Canyon resorts in the distance (upper right). 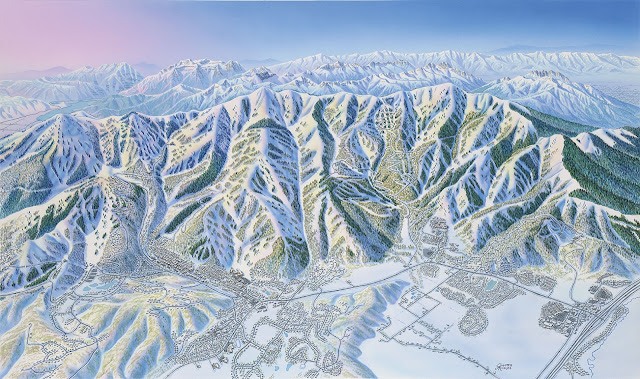