15 ¶ And when one of them that sat at meat with him heard these things, he said unto him, Blessed is he that shall eat bread in the kingdom of God.
16 Then said he unto him, A certain man made a great supper, and bade many:
17 And sent his servant at supper time to say to them that were bidden, Come; for all things are now ready. 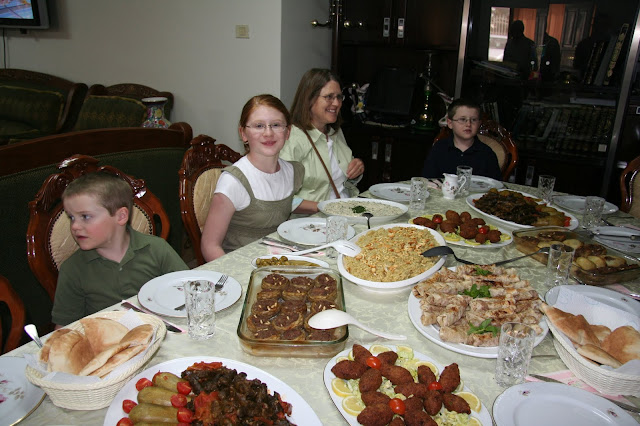 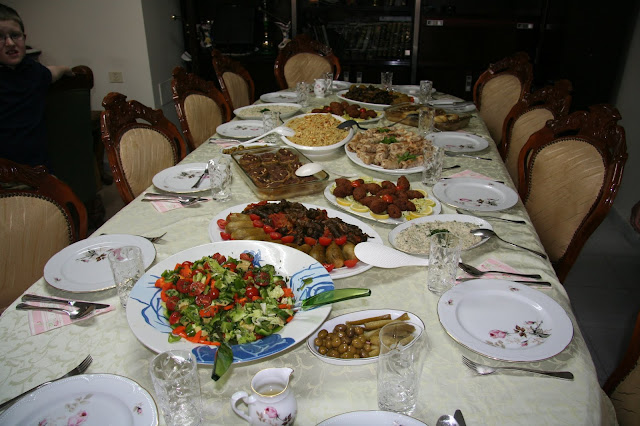 On Good Friday 2010, our family was invited to enjoy a Friday Family dinner at the Qawasmi home. We all enjoyed a wonderful and delicious Arab feast.

Luke 14:
28 For which of you, intending to build a tower, sitteth not down first, and counteth the cost, whether he have sufficient to finish it? 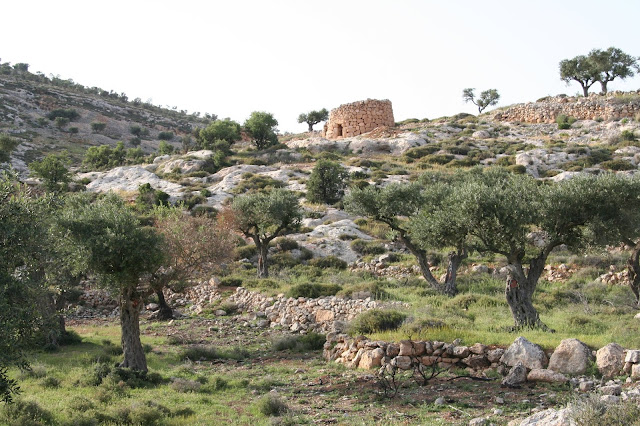 Watch towers in the valley between Bethlehem and Jerusalem. 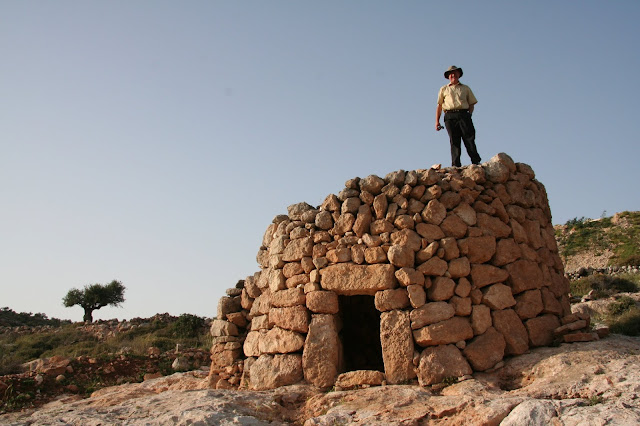 Watchmen on these towers would use them to keep watch over trees and crops at harvest time. 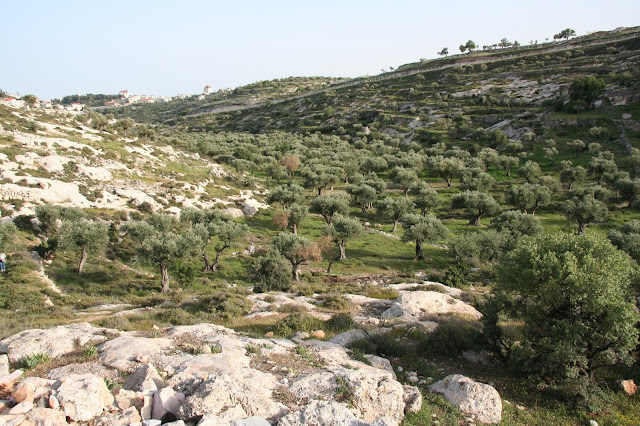 View from atop the tower looking down on the olive groves in the valley. 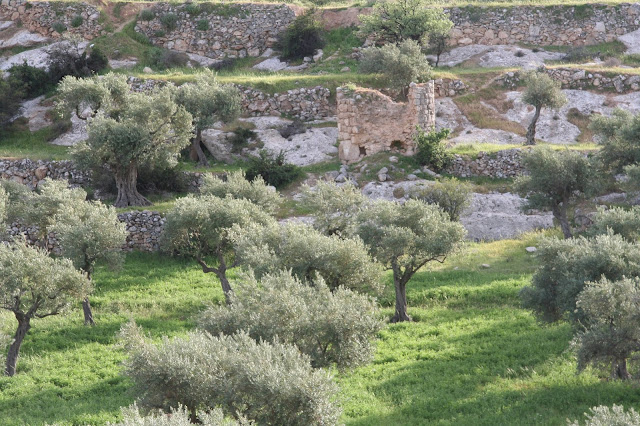 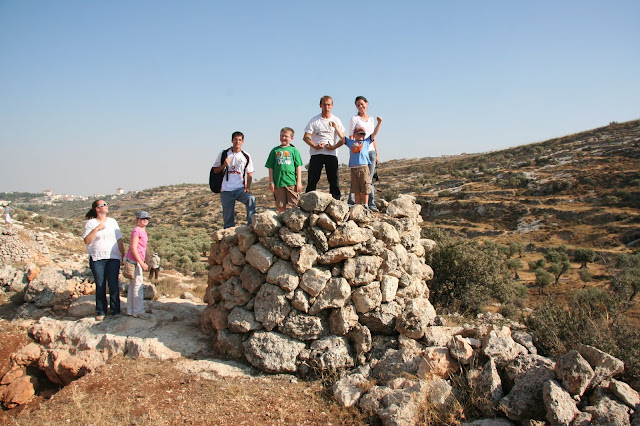 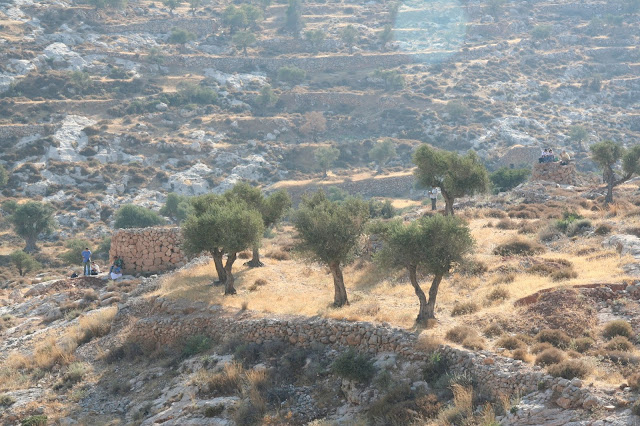 Three towers in this photo.

1 Then said he unto the disciples, It is impossible but that offences will come: but woe unto him, through whom they come!
2 It were better for him that a millstone were hanged about his neck, and he cast into the sea, than that he should offend one of these little ones. 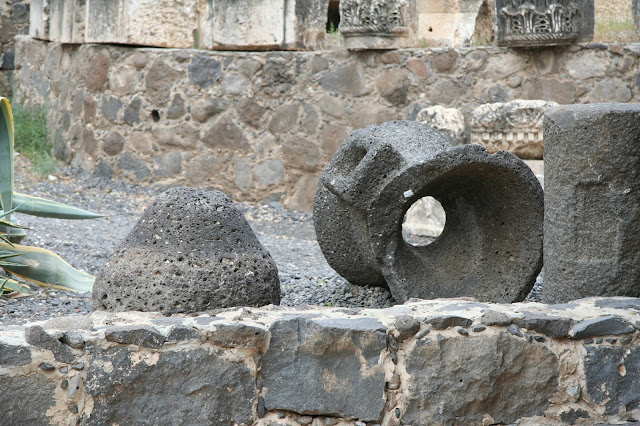 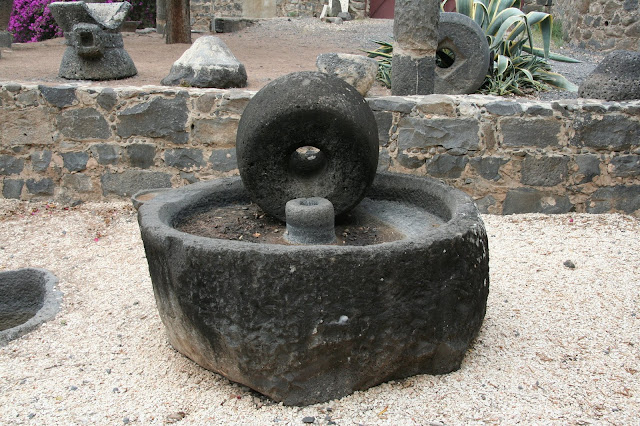 Stones for crushing olives. (both from Capernaum)

Luke 17:
35 Two women shall be grinding together; the one shall be taken, and the other left. 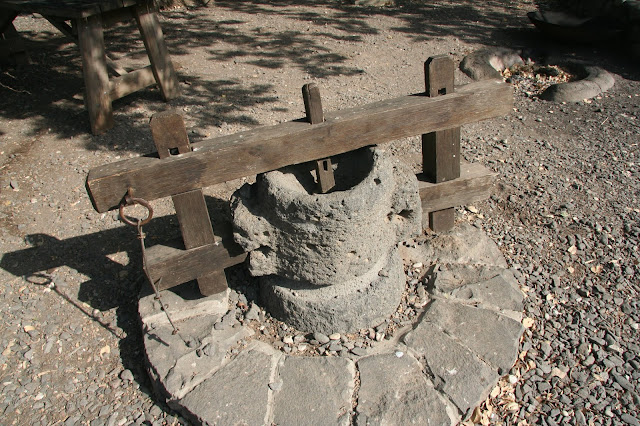 This is a grinding stone. The wheat grains are place in the top and then they are pulled down into the hour glass shaped stone and then ground as it expands out over the cone shaped lower stone. (the shape of these stones can be seen in the Capernaum stones above).  Two women could work in tandem to push on the wooden bars that turn the top stone and grind the wheat into flour.


1 Now a certain man was sick, named Lazarus, of Bethany, the town of Mary and her sister Martha.
2 (It was that Mary which anointed the Lord with ointment, and wiped his feet with her hair, whose brother Lazarus was sick.)
3 Therefore his sisters sent unto him, saying, Lord, behold, he whom thou lovest is sick.

43 And when he thus had spoken, he cried with a loud voice, Lazarus, come forth.
44 And he that was dead came forth, bound hand and foot with graveclothes: and his face was bound about with a napkin. Jesus saith unto them, Loose him, and let him go. 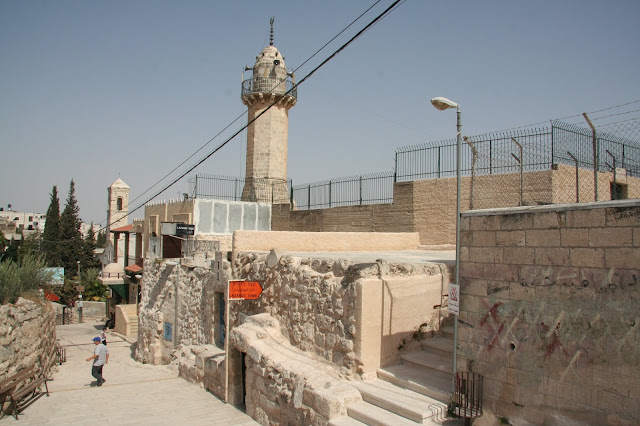 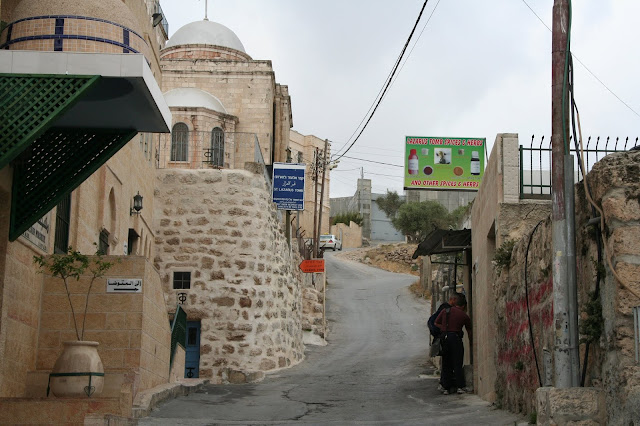 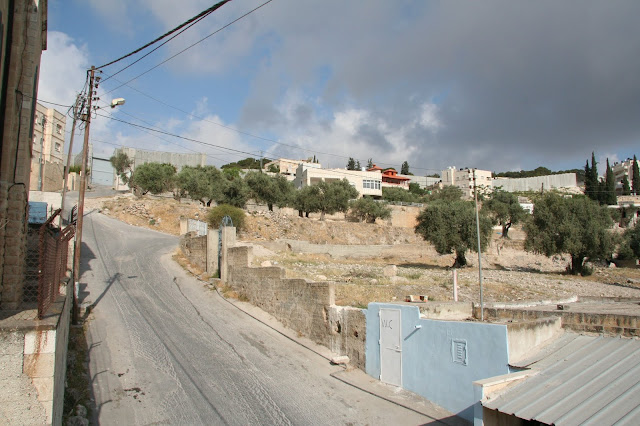 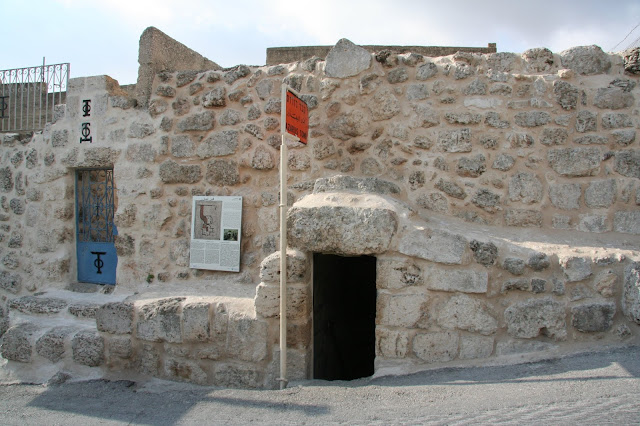 Entrance to the tomb. 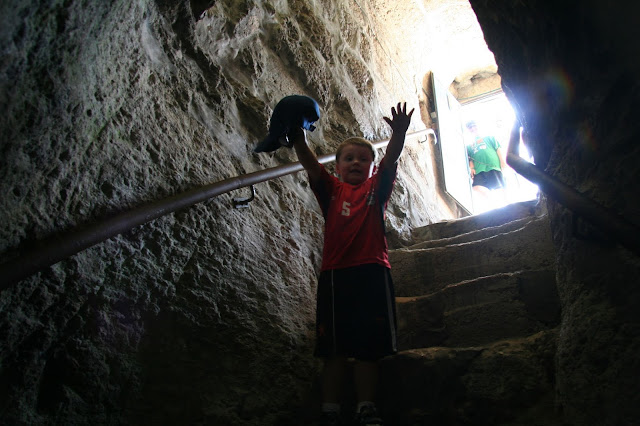 It is a steep descent down to the tomb. 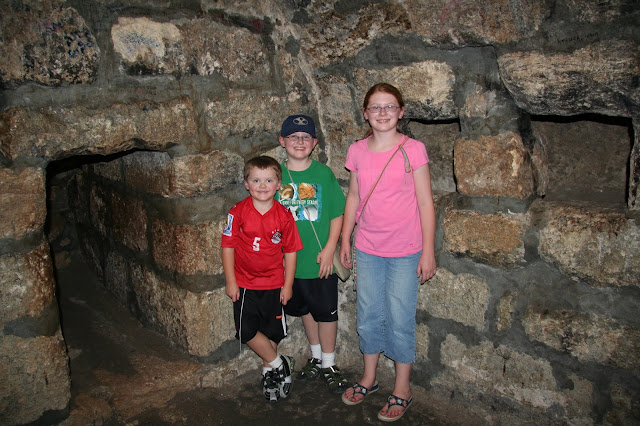 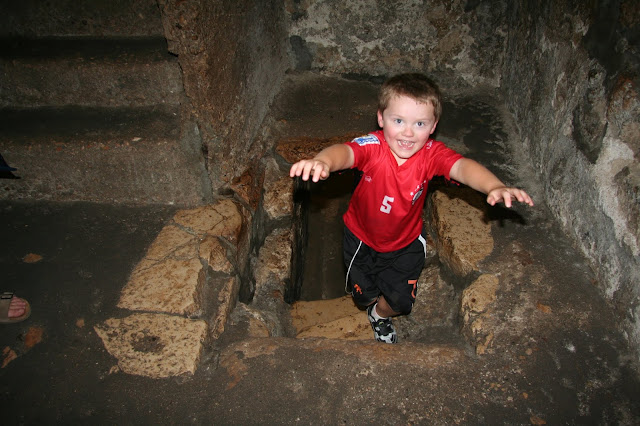 From my original blog post about Bethany: During winter semester a baby bird fell out of its nest and into the courtyard of the student apartments one level below us. The students tried to feed the bird and keep it warm. They named it Bucket. Our children went to visit the bird. Then after a few days it died. A few days later I accidentally left my anti-melanoma wide-brimmed hat in the church at Bethany on the field trip. Later that day I returned to the church in a hired van along with Will to retrieve my hat. While there we took a few minutes to visit the tomb of Lazarus. I was trying to explain to five year old Will about Jesus bringing Lazarus back to life. I wasn't sure if he was understanding that through Jesus we all can live again. I told him how Jesus had called to dead Lazarus to come forth. Will has not experienced the death of anyone he knows and so I latched on to the recent death of Bucket the bird to explain that Jesus could make Bucket live again. I knew that Will understood it all when a few minutes later from the depths of the tomb he exclaimed: "Bucket, come forth!"    http://beitemmett.blogspot.com/2010/09/bethany.html 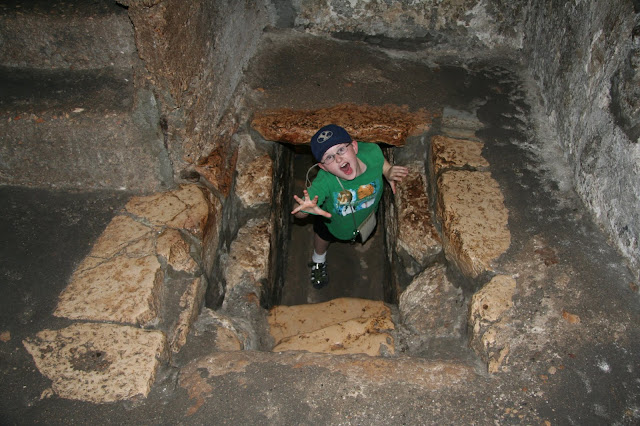 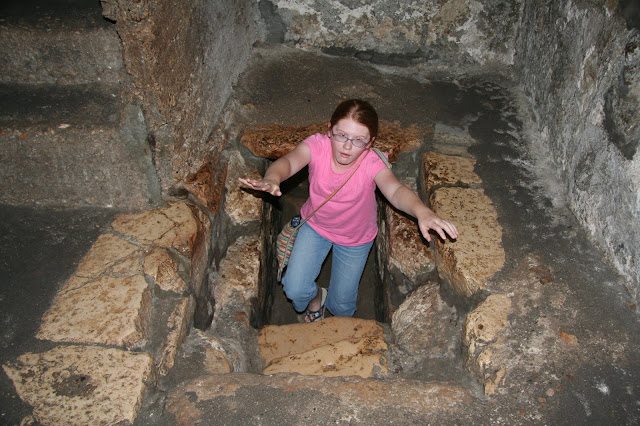