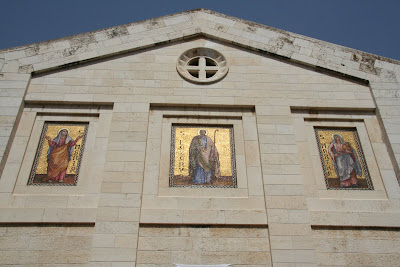 Bethany is the first stop of the last two days of field trips that re-trace the events of the final week of Christ's life. The Arabic name for Bethany is al-Azariyah which is the Arabic derivative of Lazarus. The Roman Catholic Church pays tribute to Bethany's most famous residents: Mary, Martha and Lazarus. 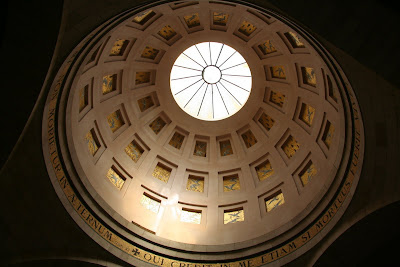 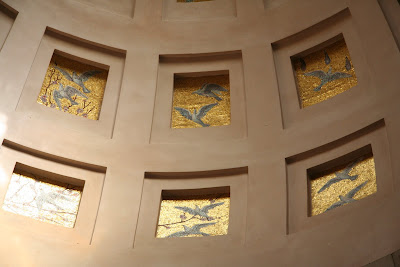 I really liked the interior of the dome with its golden mosaics of birds in flight. The church also had great mosaics of Bethany events: 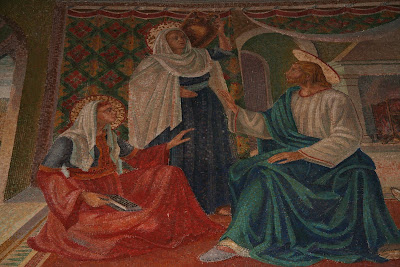 Jesus telling Martha that Mary, who chose to listen to Jesus rather than busy herself with household duties, had chosen the better part. 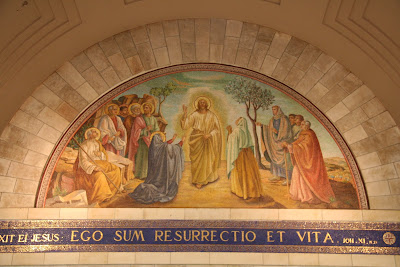 Martha learned her lesson. Next time Jesus came to town it was she who hustled out to meet him. At that meeting Jesus told Martha that he was the resurrection and the life. 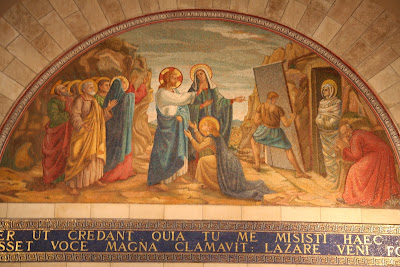 Jesus then raised Lazarus after four days in the tomb (Jews believed that the spirit lingered near the body for three days, so Jesus waiting to raise Lazarus on the fourth day showed that Lazarus was most sincerely dead). 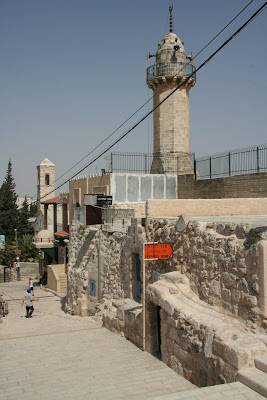 Sandwiched between the Catholic and Greek Orthodox churches is a mosque. It sits atop the tomb of Lazarus. Anciently the entrance to the tomb was from the east near the church, but that entrance was blocked with the building of the mosque so now the entrance to the tomb (by the orange sign) is from the north and down a long uneven flight of stairs. Jerusalem Center colleague Kent Brown always tells the students that he feels that this really is the tomb! 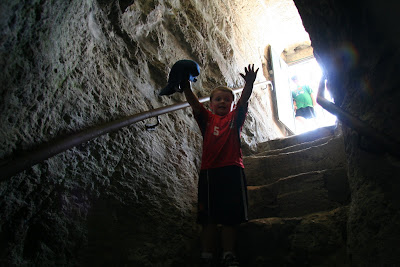 Descending into the tomb 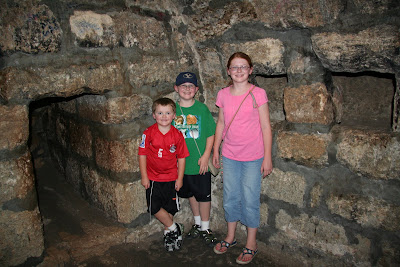 Inside the tomb. The small entrance leads out to another chamber and then up the stairs. 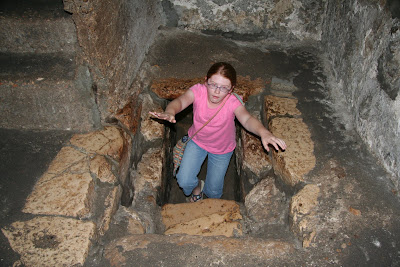 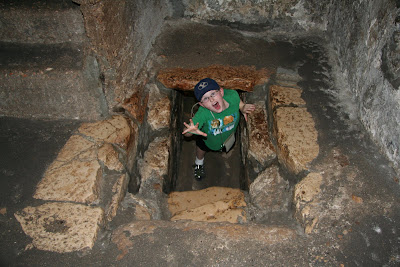 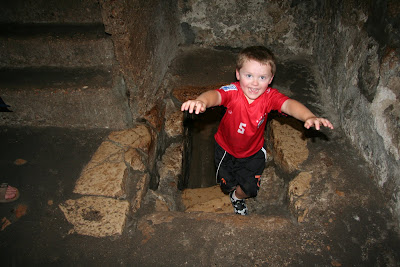 "Will, come forth!"
During winter semester a baby bird fell out of its nest and into the courtyard of the student apartments one level below us. The students tried to feed the bird and keep it warm. They named it Bucket. Our children went to visit the bird. Then after a few days it died. A few days later I accidentally left my anti-melanoma wide-brimmed hat in the church at Bethany on the field trip. Later that day I return to the church in a hired van along with Will to retrieve my hat. While there we took a few minutes to visit the tomb of Lazarus. I was trying to explain to five year old Will about Jesus bringing Lazarus back to life. I wasn't sure if he was understanding that through Jesus we all can live again. I told him how Jesus had called to dead Lazarus to come forth. Will has not experienced the death of anyone he knows and so I latched on to the recent death of Bucket the bird to explain that Jesus could make Bucket live again. I knew that Will understood it all when a few minutes later from the depths of the tomb he exclaimed: "Bucket, come forth!" 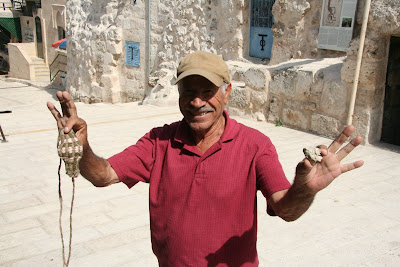 The care taker of the tomb owns a souvenir shop that sells wonderful David slings. He always demonstrates how to sling a sling by sending two stones flying off into the distance. He then says with a smile that he sent the two stones flying in that direction because that is where his wife and mother-in-law live. 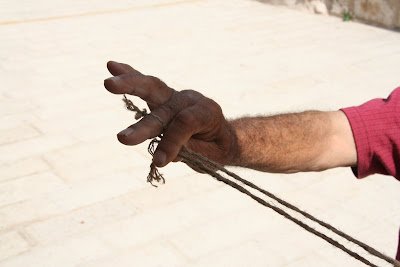 The correct hand position. The one string stays attached to the middle finger while the thumb and pointer finger let go. 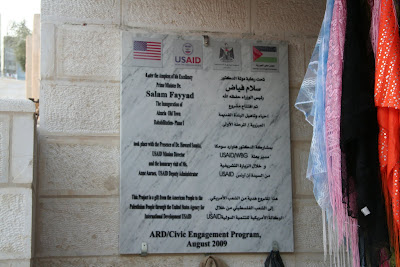 The street running in front of the tomb, the two churches and the mosque has been repaved and upgraded thanks to a USAID program to improve the tourist infrastructure in Palestine. It is a nice good-will out-reach program. 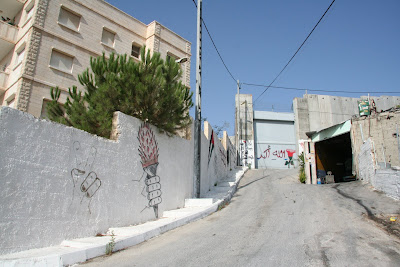 Too bad more tourists don't make it to Bethany. Once upon a time many tourists/pilgrims and all of the BYU students would come to Bethany and then climb up and over the Mt of Olives to Jerusalem just as Jesus so often did. Unfortunately, the wall now prevents that walk. Less than a 100 yards from the tomb the wall separates Bethany from Bethpage and Jerusalem. To reconnect with the path Jesus walked now necessitates a 30 minute circuitous drive that includes going through the relatively new tunnel under the Mt. of Olives. When the wall was being built, a vigilant congressman familiar with the pilgrim route coerced the Israeli government to put a gate in the wall for the pilgrims to use, but as far as I know tourists have never been able to use the gate (seen above). 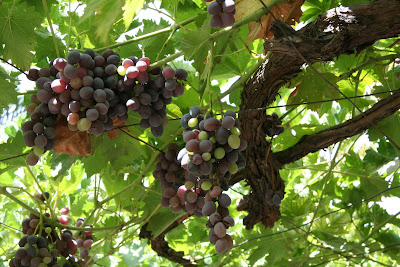 The gardens of the Catholic church are very well cared for. We always sit under this grape arbor to remember the Biblical accounts associated with Bethany. The arbor is also a great reminder of the allegory of the True Vine. "I am the vine, ye are the branches"
Posted by chad at 4:50 PM