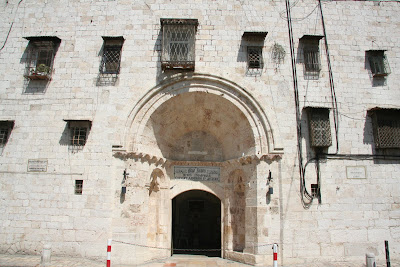 Early in our stay in Jerusalem we stopped at an Armenian pottery shop to look around. It was just across the street from the main entrance (above photo) into the walled Armenian Quarter. In the past visitors could just walk into the quarter and explore, but now a guard limits visitors to just the Church of St. James. I mentioned to George the shop owner about our desire to see the quarter and he offered to take us for a visit any time. We never got around to arranging that visit, but when some adventuresome summer semester students expressed interest in visiting the quarter I sent them to George and they arranged a visit. And so one afternoon about forty students and the Emmetts met at George's shop for a tour. George was out of town and so he arranged for his brother who just returned from living in the US to give us the tour. 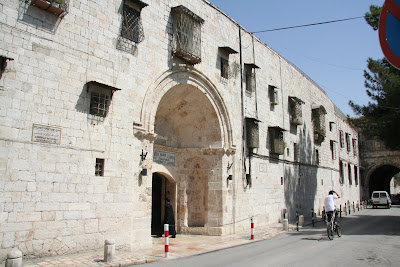 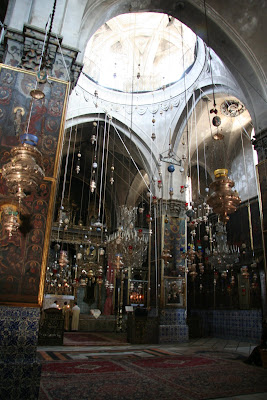 The main church of the quarter is the Church of St. James (the brother of Jesus) 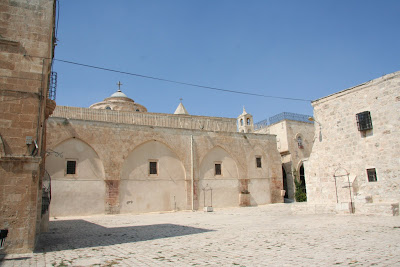 The squat steeple of the church rising over the main courtyard of the quarter. 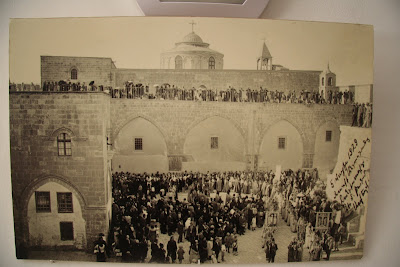 This decades old photo shows the same courtyard full of Armenians. Armenians were the first nation to convert to Christianity and they have a long history of residency in Jerusalem--thus they have their own quarter. The population of the quarter was bolstered in the early 1900s when survivors of the Armenian genocide by the Ottoman Turks in Eastern Anatolia found refuge here. 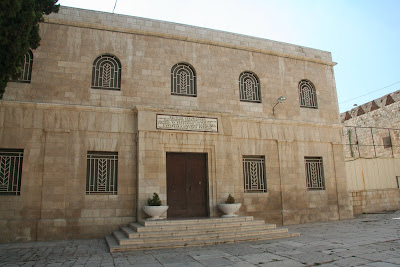 Years ago I spent some time in this library (with Armenian publications and newspapers from around the world) interviewing a historian of Armenians in Jerusalem. 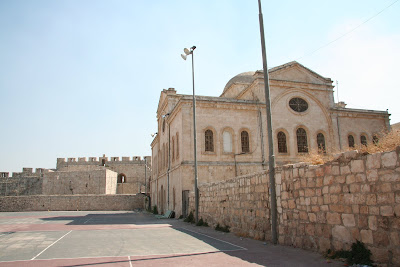 A gathering hall for clerics. Zion's gate and the walls of the old city in the distance. 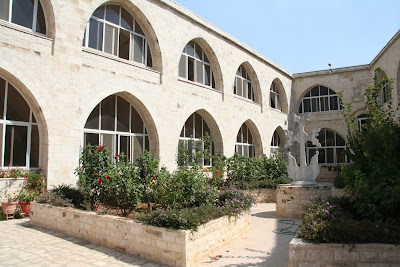 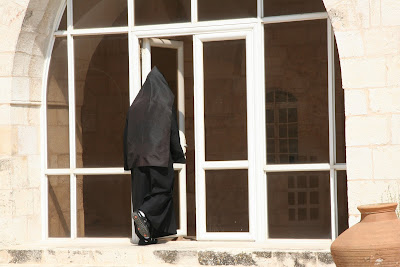 One of the seminarians 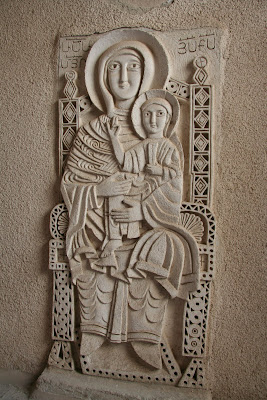 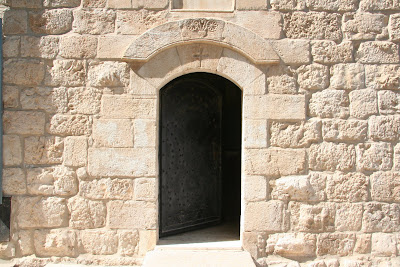 Most of the quarter is filled with Armenian institutions, but there are also residential areas and homes tucked away behind doors such as this. 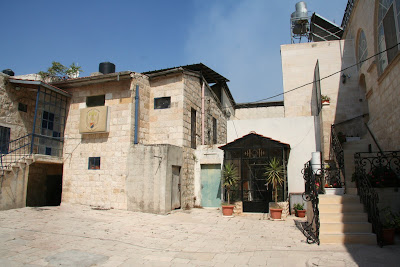 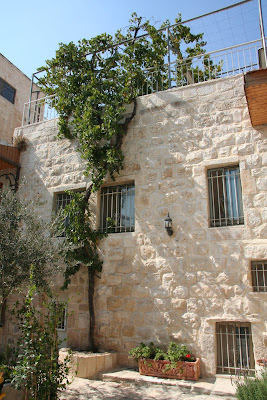 I am always impressed with the 2-3 story high grape arbors that are found in homes of the Middle East. Families can sit on the flat roof tops under the shade of the arbors. 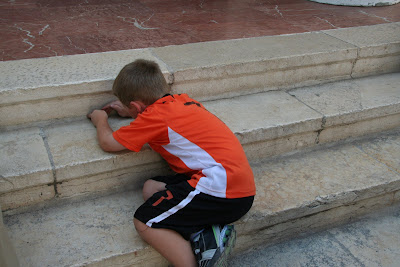 Will enjoyed exploring the doorways and alleyways of the quarter, but he also enjoyed persecuting the resident ants. Earlier in the year I forbade him from the wanton killing of ants so now when he is bored with our touring he corrals and captures ants, of which there are always plenty. He is dressed in his souvenir Netherlands soccer jersey and shorts. 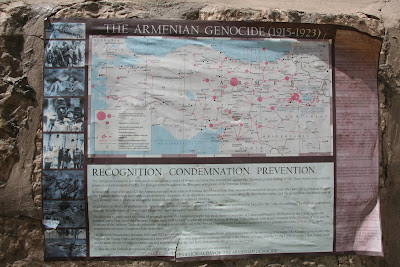 In and around the quarter you can see these posters reminding visitors of the Armenian genocide. Hitler once said that Germany would be able to exterminate the Jews because of the indifference of the world. After all, he said, "who remembers the extermination of the Armenians." Over 1 million Armenians perished as Turks killed them and forced them from their homes into the deserts of Syria where even more perished. 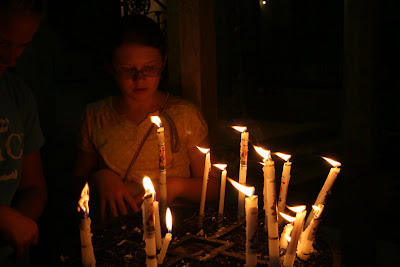 We all then walked over to the Church of the Holy Sepulcher to visit the Armenian areas. While George's brother (I forget his name) made arrangements with a priest Sarah watched prayer candles. 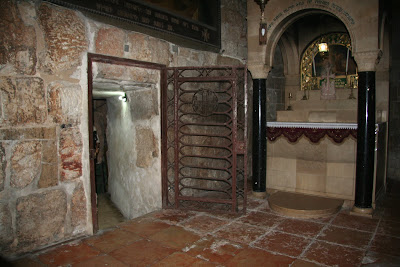 In the Armenian Church of St. Helena a side door leads down to some cisterns, ancient steps and a hidden chapel. I had never been in this part of the church so I was excited. 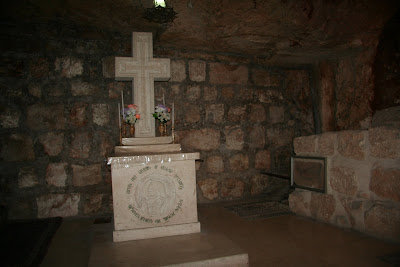 The chapel--which Armenians believe is located along the route Jesus trod to Calvary. 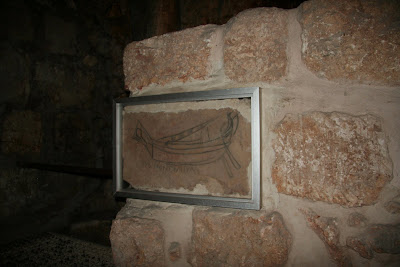 This is a 5-6 century drawing of a fishing boat. 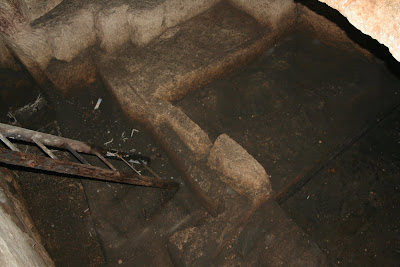 Looking down to a more ancient level of Jerusalem to what the Armenians believe is the path Jesus trod to Calvary. 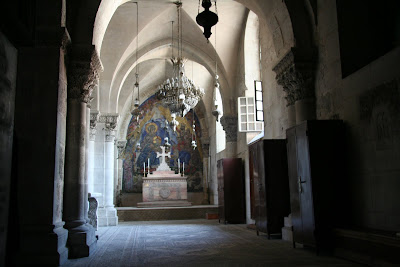 We the climbed to the Armenian gallery which is one level above the entry level and just across the entry from Calvary. Centuries ago the Armenians lost control of Calvary to the Greeks and Latins so this is as close as they can get. 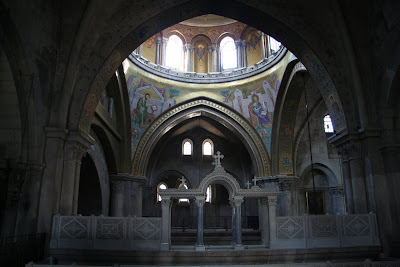 From the Gallery there is a nice view into the Greek Orthodox controlled Katholikon. 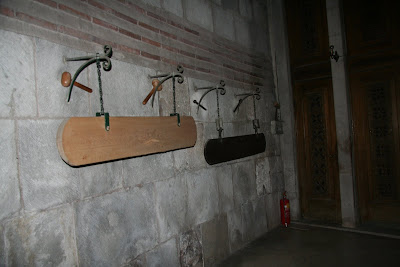 Priests pound on these boards to announce the beginning of services. 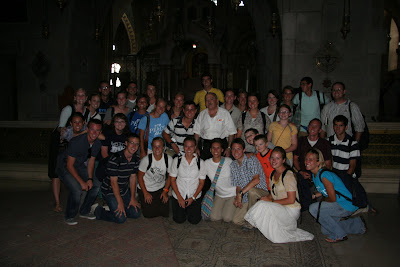 The adventuresome BYU students and our nice Armenian guide. A few days latter I visited their pottery shop and bought a nice ceramic pomegranate.