Acts 1:
9 And when he had spoken these things, while they beheld, he was taken up; and a cloud received him out of their sight.
12 Then returned they unto Jerusalem from the mount called Olivet, which is from Jerusalem a sabbath day’s journey. 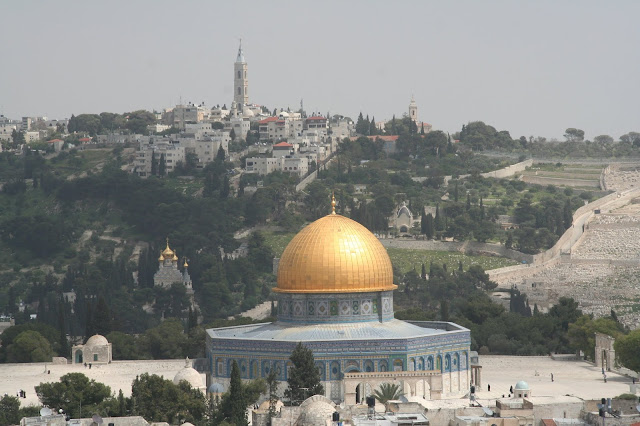 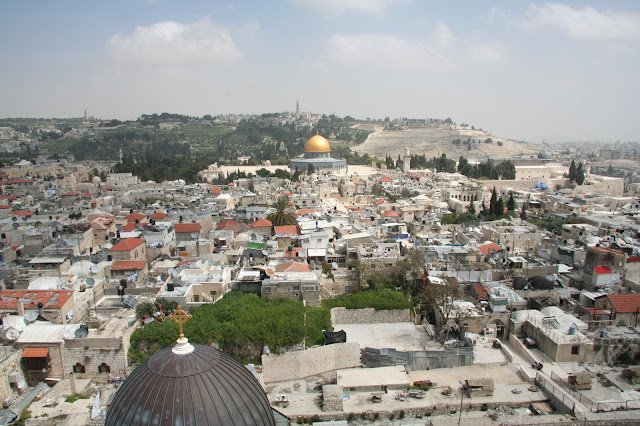 The Old City of Jerusalem with the Mount of Olives in the distance. 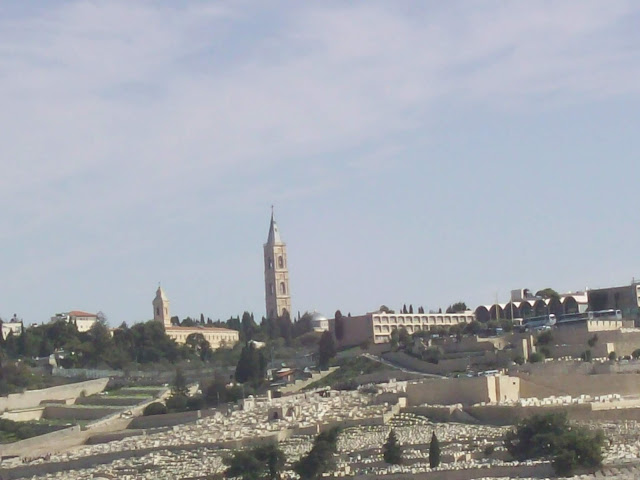 Russian Steeple of the Ascension. There is no church attached to the free standing steeple. When first built in the 1800s the steeple doubled as a place where pilgrims could ascend to then get a good view down in to the Jordan River Valley and the baptismal site of Jesus. The Steeple is not open for climbing. 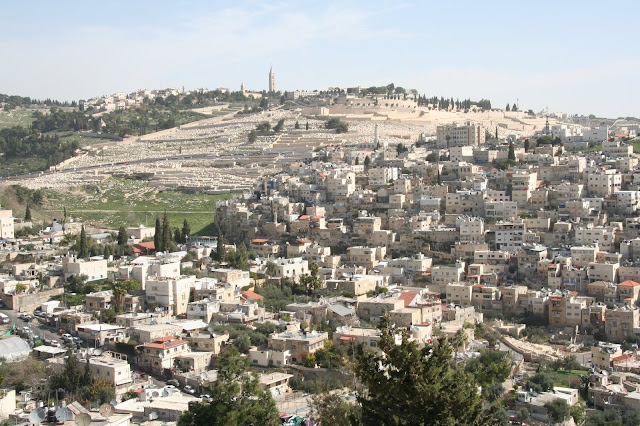 Mt of Olives from the southwest. 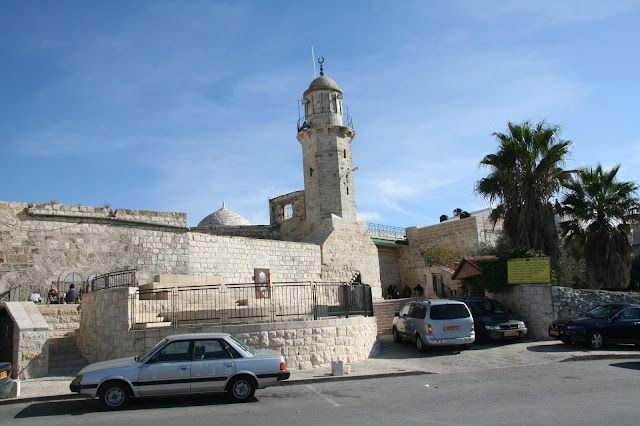 The mosque of the ascension is located where an ancient octagonal Byzantine Church one stood. 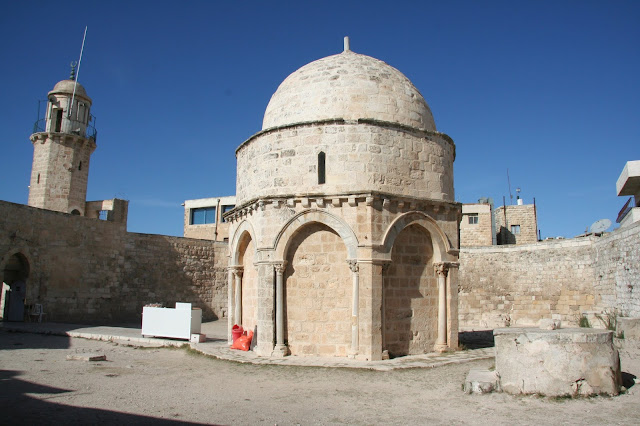 Behind the mosque is this open yard which is surrounded by the lower walls of the Byzantine church. The cupola marks the site of the ascension. On the Feast of Ascension, various Christian communities are permitted to worship in the yard at various altars. This site of the ascension is a good example of sacred space that is peacefully shared between Christians and Muslims. Once upon a time I spoke at a BYU Forum about this and other sacred spaces in the the Holy Land. Listen to it here: "Sharing Sacred Space in the Holy Land. https://speeches.byu.edu/speakers/chad-emmett/. Unfortunately there is no way to see the many images I showed to illustrate my speech. Later I published this research here: 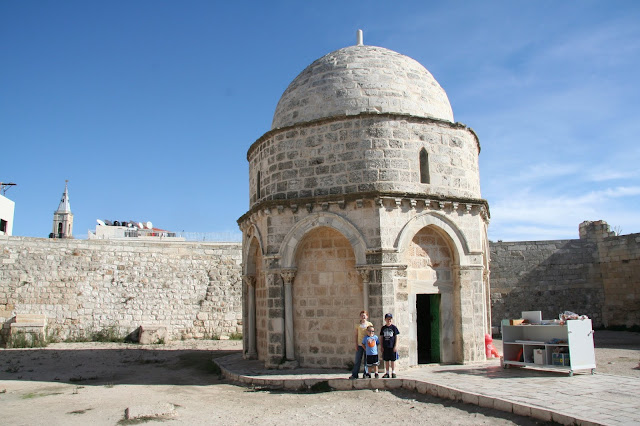 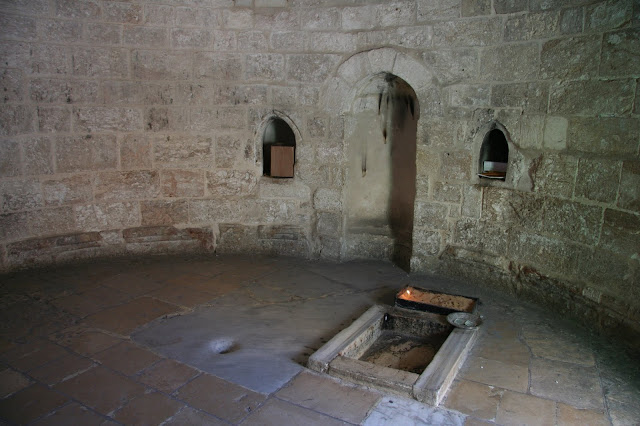 Inside the dome of the ascension. The mihrab (niche in the wall indicating the direction of Mecca) indicates this is used as a mosque. The rectangle on the floor encloses a rock which some says in imprinted with the last foot print of Jesus right before his ascension. 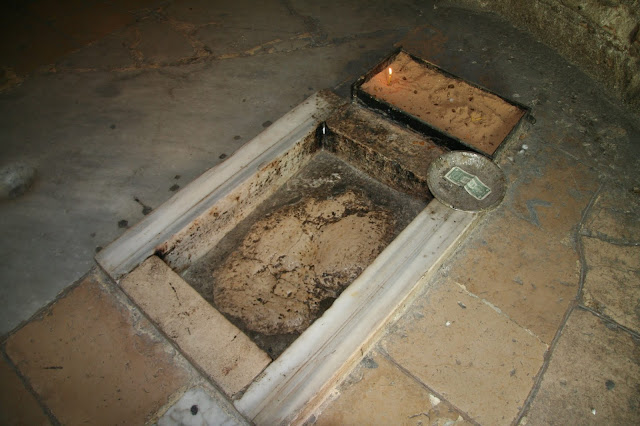 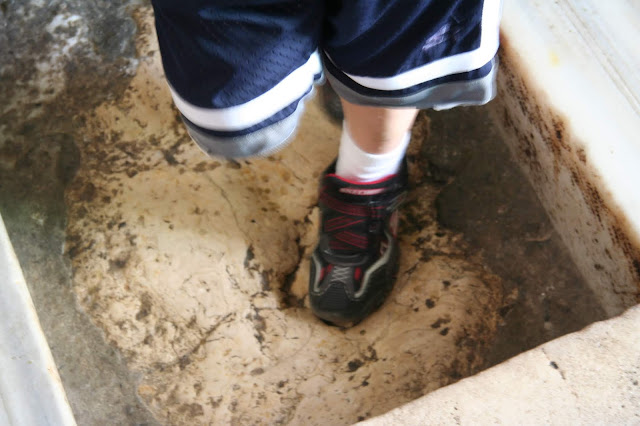 Will's foot in the foot print of Jesus. 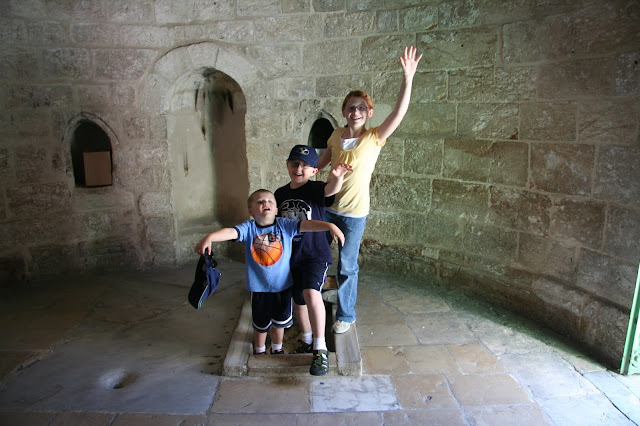 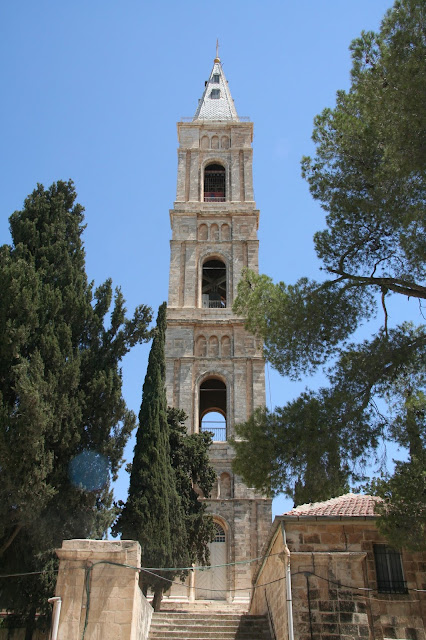 Russian Steeple of the Ascension.

Acts 2:
1 And when the day of Pentacost was fully come, they were all with one accord in one place. 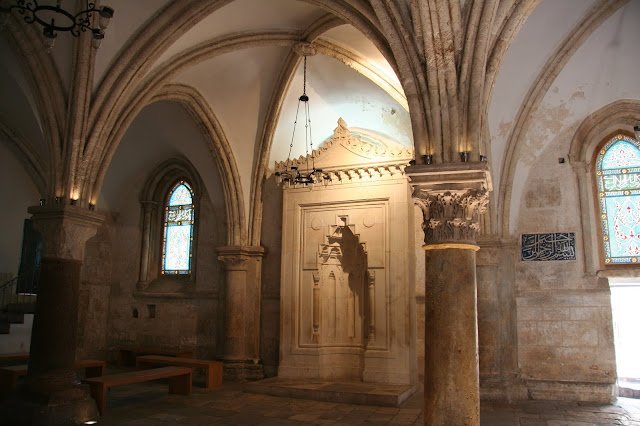 The Upper Room (this is the traditional site which was crusader built, the a mosque, and now Franciscan claimed and Israeli administered) of the last supper is also thought to have been the room where early saints gathered to worship including on the day of Pentecost. 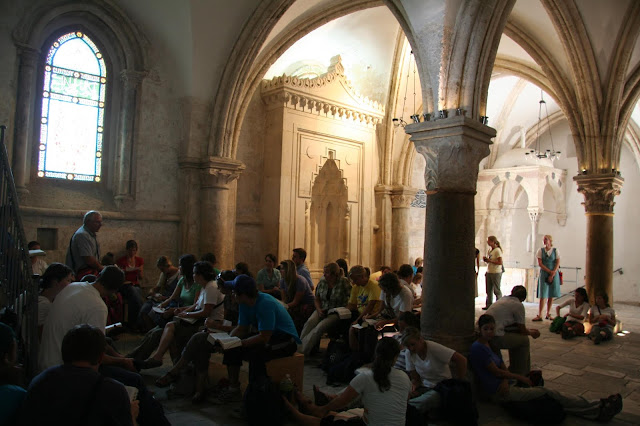 BYU Jerusalem Students reflecting on the teaches of the last supper. 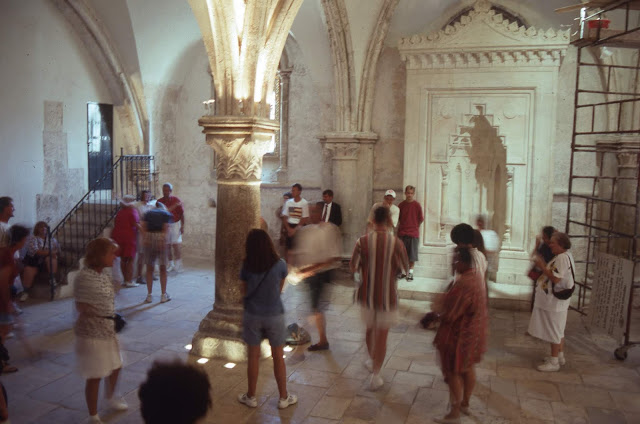 
Acts 2:
5 And there were dwelling at Jerusalem Jews, devout men, out of every nation under heaven.
6 Now when this was noised abroad, the multitude came together, and were confounded, because that every man heard them speak in his own language. 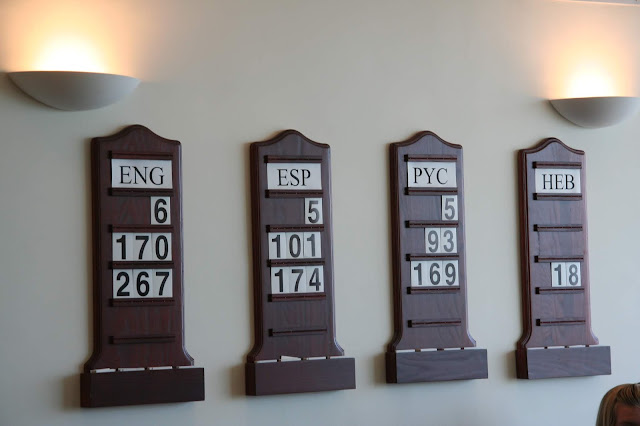 The song boards from the Galilee Branch House in Tiberius. Like early members of the church at Pentecost, modern day saints of the Galilee Branch have many different native tongues including (left to right) English, Spanish, Russian and Hebrew. Other native languages in the branch over the years have also included Arabic, Armenian, German, Tagalog, and Turkish. These songs boards are no longer used given that the beautiful branch house was closed up two years ago (by the Church and with no explanation). Read more on this frustrating development towards the end of this blog post: http://beitemmett.blogspot.com/2018/05/not-as-they-were.html 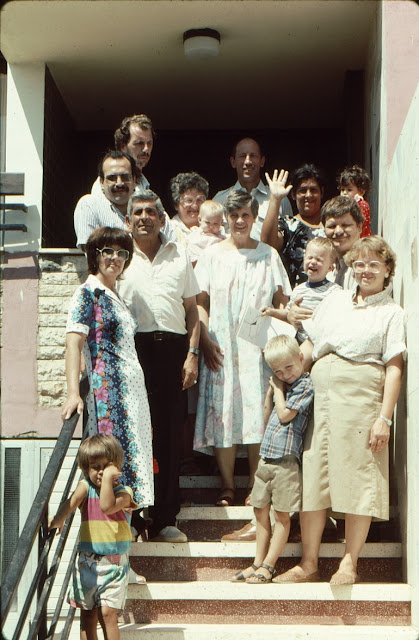 When I attended the Galilee Branch 1988-89, I took this photo of the multi-lingual members. Hebrew was the common language of most of the members whose native languages included English, Spanish, Arabic and German. One Sabbath three of us met for the priesthood lesson. The Spanish speaking teacher (immigrant to Israel from Argentina) used a Spanish language manual to teach from. He taught in Hebrew. An Arab member (from Nazareth) who also spoke Hebrew then translated the Hebrew into English for me. Gifts of tongues. 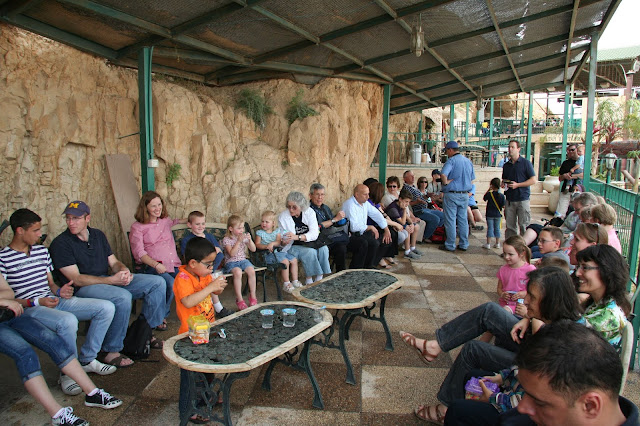 In May of 2010, members of the Jerusalem Branch met in Jericho for a day of fellowshipping. Here we are for an afternoon meeting at the Mount of Temptation. We met in Jericho because it was the one neutral place where Palestinian members from the West Bank, who were not permitted to travel into Jerusalem for church meetings, could meet with other members of the Branch, who due to BYU and State Department travel restrictions were not allowed to travel to most areas of the West Bank. Native tongues of this gathering were mainly English and Arabic, but also included Tagalog, Russian and German. One of the families from the West Bank included an Arab father and a Russian mother. Love these multilingual gatherings where most of the people are polyglots. 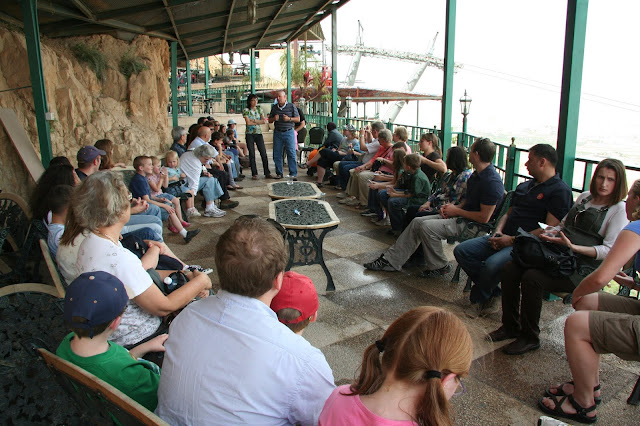