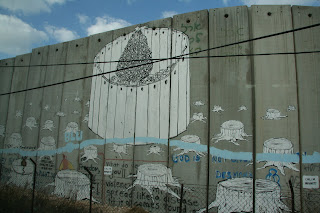 Thursday was the student field trip to Bethlehem. Since the US State department still has Bethlehem (as part of the West Bank) on its travel warning list this is the only time students are allowed in Bethlehem. We passed through the Israeli checkpoint and a gate in the new security fence (aka the separation wall and the apartheid wall). The wall has certainly helped to cut down on suicide bombers, but it has also become a towering impediment to the movement of innocent people. There are several LDS Arab Mormon families in the Jerusalem branch who are not able to attend church meetings in Jerusalem because of the barrier--luckily diligent home teachers (with US passports) are allowed to cross into Bethlehem and meet regularly with the members. The Relief Society President who lives in Bethlehem is able to cross through the wall because she works for the UN and has a travel permit. Her job most likely ends this month which means beginning in January she too will not be able to attend meetings in Jerusalem.

The Palestinian side of the wall has become a great canvas for graffiti. Notice the Christmas tree surrounded by the wall. 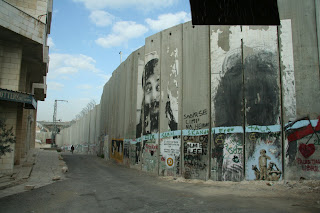 This section of the wall separates the Israeli held enclave of Rachel's tomb in northern Bethlehem from the surrounding Arab homes. 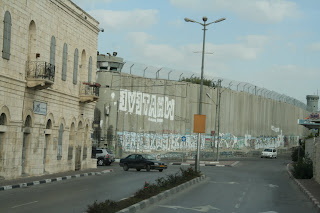 Another view of the Bethlehem wall. Last week the students visited part of the wall between Bethany and Bethpage on the eastern side of the Mt of Olives with Israeli Attorney Danny Seideman. He founded an organization (Ir Amin--http://www.ir-amim.org.il/eng/) that promotes a Jerusalem shared peacefully by Arabs and Jews. He is working to bring the wall down and to halt Jewish encroachment into the Arab neighborhoods of Jerusalem. 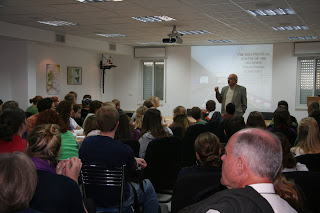 Our first stop in Bethlehem was at the The Applied Research Institute--Jerusalem (http://www.arij.org/). The ARIJ uses great maps and GIS technology to monitor the wall, settlement growth, water usage, etc. in the West Bank and Gaza. The students got a good overview of the conflict from a Palestinian perspective. 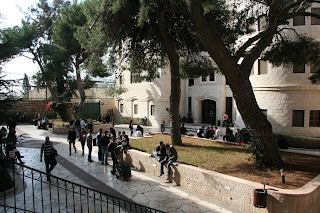 Next stop was Bethlehem University which is run by Catholic Brothers and is sponsored by the Vatican to provide higher education for Palestinian Arabs--both Christian and Muslim. 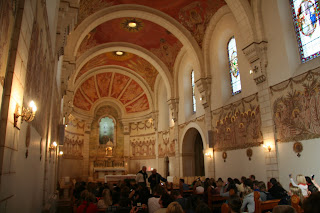 At the center of the small campus is a beautiful chapel. It is decorated with processions of Christian children martyrs from around the world. 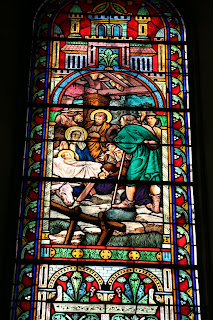 The dozen or so beautiful stained glass windows illustrated scenes from the birth and childhood of Jesus. 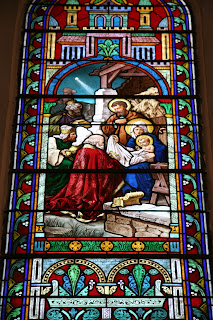 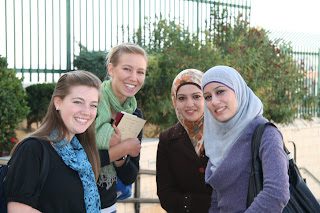 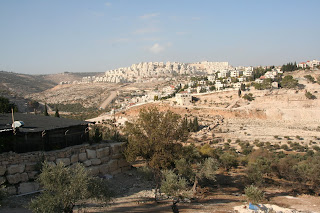 We had a great Arab lunch in a tent restaurant (at left in photo) in the Christian-Muslim-Arab town of Beit Sahour--the traditional site of Shepherd's Fields. For many years BYU student groups and Mormon Travel groups would gather at the foot of a forested hill rising to the north of Beit Sahour and Shepherd's field for a Christmas program with Bethlehem to the south as a backdrop. Today that pastoral setting is much changed. That forested hill is now covered with the fortress like homes of the Jewish neighborhood/settlement of Har Homa--seen in the far distance. The homes on the hill in the foreground are part of Beit Sahour--the wall runs between the two hills. 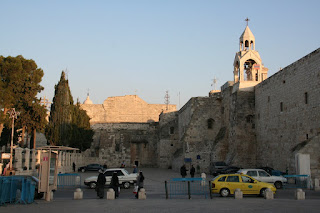 We then visited Manger Square and the Church of the Nativity. It is most likely the oldest church in the Holy Land--dating back to Byzantine times. It is jointly shared by Armenians, Greek Orthodox and Roman Catholics. 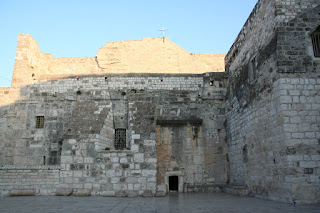 In 614 Persians conquered the Holy Land and destroyed all of the Byzantine churches--except this one. According to one 9th century source the invading Persians rode up to this church and upon seeing a mosaic of Persian dressed Magi on the front facade of the church (the triangle shaped area partly in the sun) could not bring themselves to destroy it. The shortened entry door is the work of the Crusaders who wanted to make sure all pilgrims bowed to enter the church and to keep horsemen from riding in. 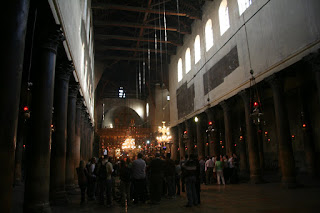 The interior of the church in classic Byzantine basilica form. Since this church is jointly shared it has been the scene of disputes between rival priests who have resorted to hitting each other with brooms and mops when one sect cleans an area designated in the Status Quo as being under the control of another sect. To clean a floor or to repair a wall means you can claim it. This means everyone is very vigilant to make sure no one tries to gain any sacred ground. For years the roof leaked because the three religions could not agree on who would pay to repair it. To pay means to own and it was the Roman Catholics who were most able to pay--much to the frustration of the Greeks and Armenians. 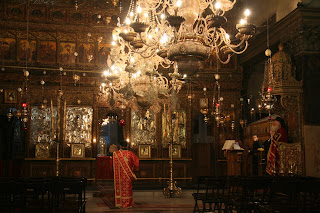 Afternoon prayers by Greek clergy in their part of the church which is directly over the grotto of the nativity--which is the traditional site of a cave beneath a home which was used as an animal stable. 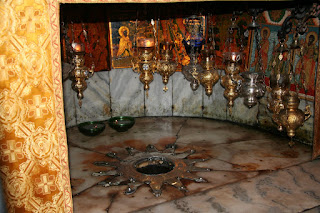 There is always quite a crowd in the grotto so it is hard to get photos. I poked my camera between pilgrims to get this photo of the 16 pointed star marking the site of the birth. When this star disappeared in the mid 1800s Greeks accused the Catholics of stealing it (or vice versa--I can't remember for sure) which then brought France to the aid and backing of the Catholics and Russia to the aid and backing of the Orthodox which was then one of the reasons for the outbreak of the Crimean War. 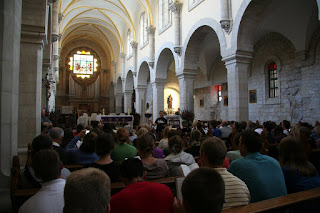 This is the adjacent Franciscan Church of St. Catherine. It is here where midnight mass is held on Christmas eve. We sang a few Christmas carols here--including a very nice Once in David's Royal City and the always favorite Angels We have Heard on High. 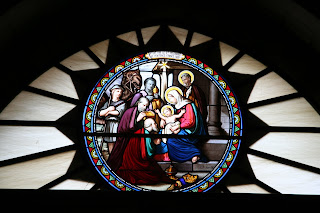 A nice stained glass window at the rear of the church. After an all too short hour of free time for shopping and exploring in Bethlehem we headed back through the Wall (the Israeli guard was very pleasant and we had no problems--unlike Monday's field trip journey through the wall to visit the Herodian) to a hillside near the Mar Elias monastery where we ate a sack dinner in the dark and then had a great nativity program. 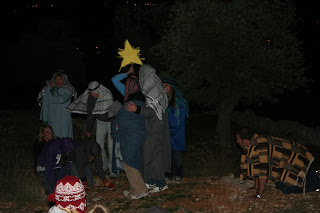 Marie and the kids joined us for this part of the field trip. The Emmett Family Singers started out the program by singing the wonderful primary song "Picture a Christmas" which was fitting since were were looking southeastward to the twinkling lights of Bethlehem. This photo shows the holy family, their donkey, sheep and shepherds. 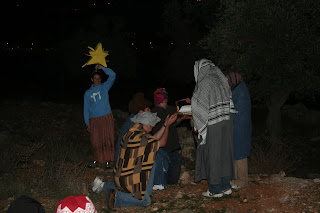 Here the wise men visit. The program reminded me of Christmas nativity programs at G & G Emmett's. Narrators read the Christmas story--including the visit of Anna and Simeon at the temple. We all sang carols and had special musical numbers including a vocal solo of Ave Maria, and a violin quintet of Away in a Manger. 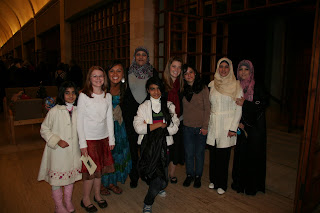 The next night (Friday) we attended the student Christmas concert. It was an excellent concert--the students in this group are very talented. The local LDS community and friends of the center were invited--Jews, Muslims and Christians were all in attendance. Will's pre-school teacher--Miss Margaret--came with a friend. Sarah was introduced to some of our neighbors (above in photo) who live across the street who attended. A group of students have become good friends with some of these families. Saturday afternoon Sarah went with some of the students to visit them. She hit it off with the 12 year old girl in the center of the photo. There are plans to get together again soon.
Posted by chad at 8:24 AM