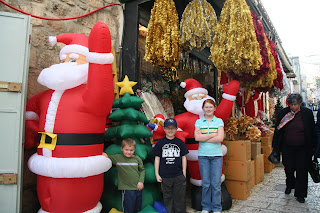 December has been a fun, busy month so far. It even looks like Christmas in a few places. This is a Christmas specialty shop in the Christian quarter of the Old City. I think they have the same supplier as K-Mart. 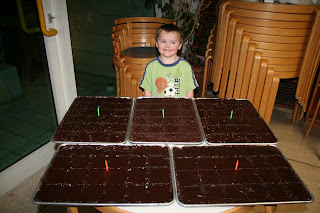 For Will's birthday Marie baked 5 cakes and invited all of the students and faculty to help celebrate. 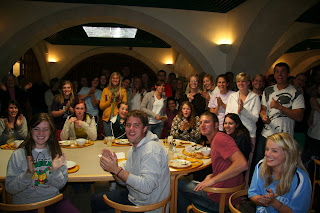 It's not often that 82 BYU students sing Happy Birthday to a five year old. They all love Will. They came up with some cute presents for him. One of the security men (Mahmoud) at the center gave Will a remote control car that he loves. 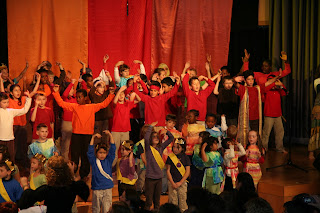 On December 11th The Anglican International School of Jerusalem primary school (Grades K-5) put on a wonderful Christmas production called the Peace Child (I took videos of Joel singing and dancing, but I have been unable to upload the large files. Joel is third from the right in brown). It was very refreshing to attend a Christmas program that focused on the real meaning of Christmas and that had no singing of Frosty the Snowman or Jingle Bell Rock. This program had no familiar Christmas carols but it did have the kids singing such songs as "Our God is an Awesome God" and "Peace Child". It started out with two rival African tribes who eventually became friends when one tribe gave the chief's son to the other tribe. The second half included biblical stories and prophecies from Abraham's sacrifice of Isaac to the birth of Jesus. After wards we enjoyed walking though Mahane Yehuda--the main market of West Jerusalem that was full of pre-sabbath shoppers. We bought fresh strawberries and gummy bears. Then we had falafel on Ben Yehuda street. 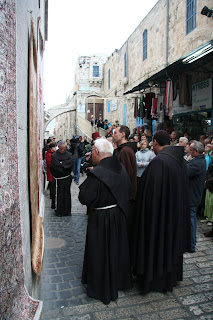 Later that day Joel and dad joined with most of the BYU students for the weekly Friday Via Dolorosa walk. At each station of the cross Franciscan monks read accounts in Italian, Russian and English of the events of Christ's journey to Calvary. 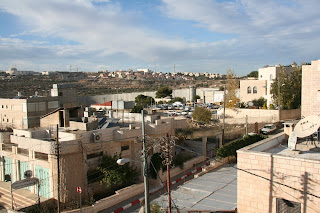 On Sunday December 13th we journeyed to Bethlehem to meet with a group of West Bank saints who are not permitted to enter Jerusalem and are thus not able to attend Sabbath (Saturday) services with the Jerusalem branch. Their home teachers and other branch members now meet with them weekly. This is a view from the fourth floor apartment of one of the part-member families. The wall in the distance is what keeps them hemmed in. 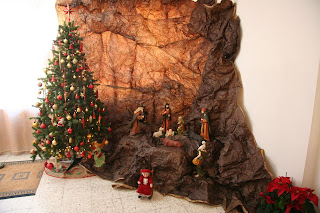 Their home was decked out in Christmas and Christian decorations. We really liked the cave-like creation. 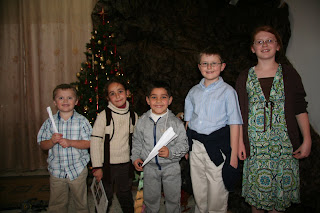 The Emmett kids were great playmates with the Bethlehem children. Everyone enjoyed Marie's snickerdoodles. 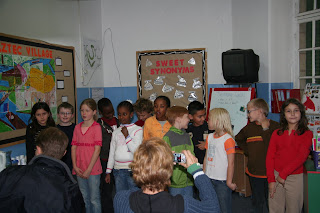 On Wednesday the 16th we attended Joel's third grade classroom presentation about all they learned the past few months about Chocolate (Aztec's, African cacao, rain forests, fair trade, etc). The class told us a little about what they had learned, sang a Mexican song in Spanish about chocolate and then treated us to homemade chocolate and Aztec hot chocolate which included chile and cinnamon. 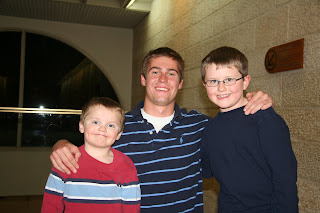 That night was the last night for the BYU students. Richie Beck (nicknamed Elmo by Joel) was one of the many students who loved to play with our kids. 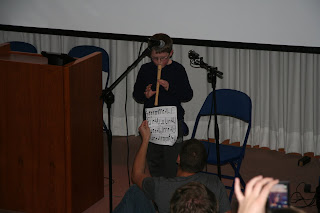 For their final night they watched slides and had an open mike. Students sang funny songs, quoted poems and played instruments. Earlier in the day Joel had been practicing Jingle Bells on the recorder so I asked if he wanted to participate. He said Yes! He played well and garnered a standing ovation. 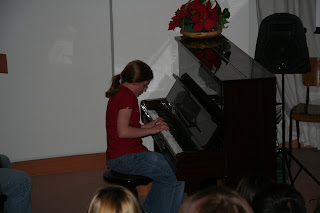 Sarah--inspired by all of the talented BYU students and not to be outdone by Joel--then volunteered to play "Night of the Tarentella". She too got a standing ovation. Always wanting to do what his siblings do, Will then wanted to participate. Just as we have often done in our home teaching/ piano room in Springville, I played Spinning Song while Joel and Will spun and spun at ever quickening speeds until they finally collapsed on the floor. It was a fun night and the kids got to stay up way past their bed time. As we left the students for the last time tears were shed by all three children who will miss their many friends.

The next morning while Marie stayed home with a sick Will (he threw up several times during the night--perhaps too much spinning, but more likely the 24 hour flu) I attended the Anglican carol service at AISJ. Sarah's Arabic class of six students and teacher Miss Rania Husseini sang a carol in Arabic (recorded, but unable to upload) and the elementary kids reprised a few Peace Child songs. 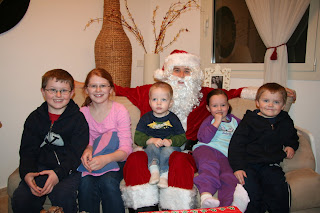 On the 18th, while Marie attended a district Relief Society dinner in Tiberius, I took the kids to Kyler and Melyn Kronmiller's for a delightful, Christmasy evening of Santa, pizza, making graham cracker houses (complete with American candies left over from a consulate party), decorating their tree and watching the Grinch Who Stole Christmas. 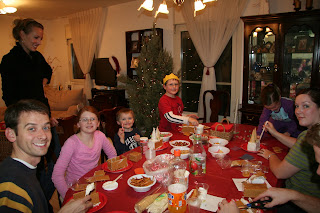 She (standing) is the Primary president and he is the Elder's Quorum President. They are a real asset to the branch and will be missed when they move on to a new State Department posting in January. 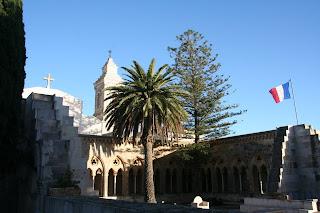 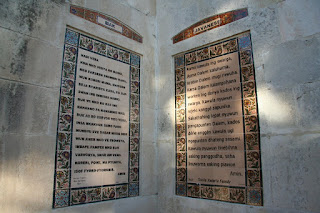 For our after church walk on Saturday the 19th we visited the church of Pater Noster on the south end of the Mt of Olives. This site has long been associated with the location of the Olivet Discourse of Matthew 24 and Christ's ascension. It is now most known for its many (perhaps a hundred) tiled renditions of the Lord's Prayer in many languages--including recent additions of several regional languages from Indonesia--that grace every spare space on the the walls of the courtyard, portico and church. Biak is spoken in West Papua. 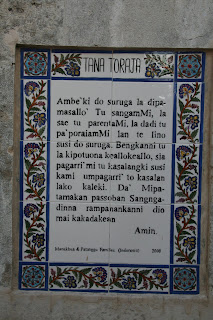 Toraja is from Central Sulawesi. 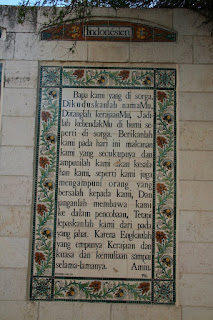 I read the Indonesian version out loud to some of the students during one of the final field trips. 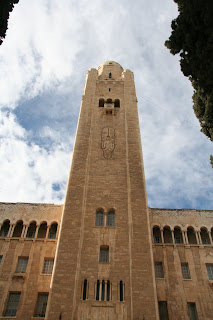 On Sunday the 20th Center organist Walter Whipple invited us to join him for his weekly playing of the Carillon at the tops of the tower at the West Jerusalem YMCA. The building was designed by the architect of the empire state building. There is a shortage of organists in Jerusalem so Brother Whipple has been playing weekly at the "Y" as well as occasional concerts at various churches in the city. BYU students go most Sundays to help out. This week the Emmetts joined in. It was great fun. We all got a turn at playing a carol on the carillon. I played Angel's We Have Heard on High and We Three Kings. Marie played Away in a Manger. What fun to know that our playing was ringing out across the city. 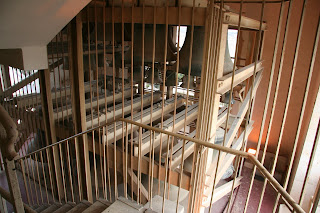 Here are the bells we were playing 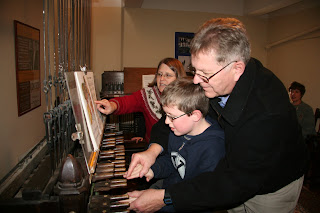 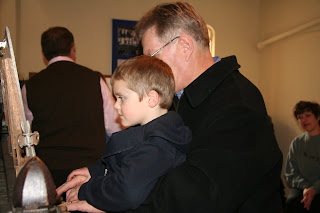 Even Will got a turn to help play. 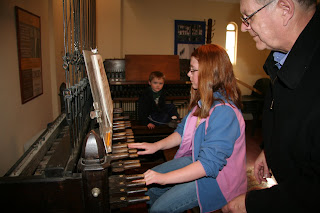 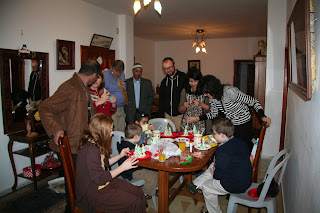