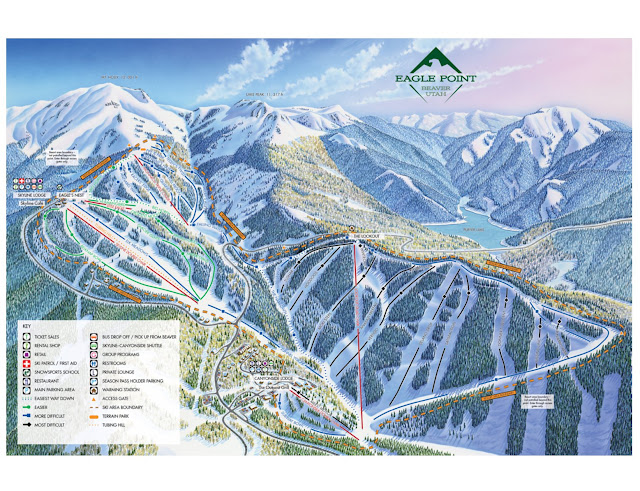 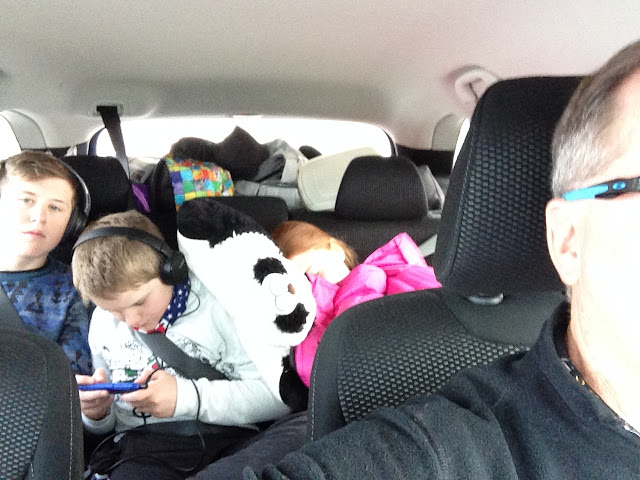 Bright and early (8:15) we headed south along 1-15 to Beaver Utah--a two hour drive. From there is was a 30 minute drive up beautiful Beaver Canyon (with amazing ice formations in the stream) to Eagle Point, formerly known as Elk Meadows formerly known as Mt. Holly. 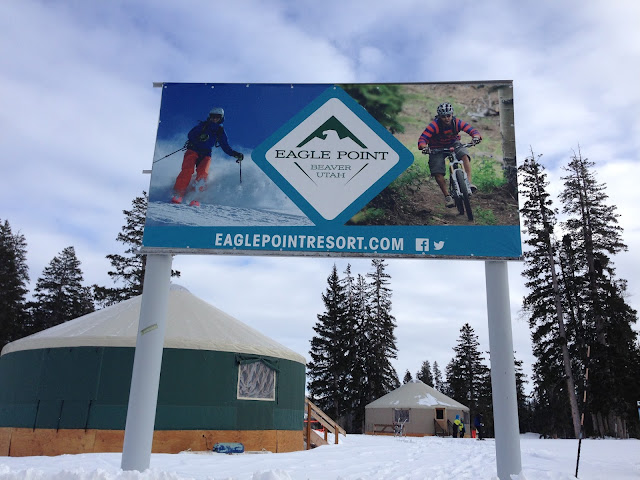 We lucked out with a newly opened parking place right next to the Skyline Lodge--with an adjacent green yurt for brown-baggers to use. 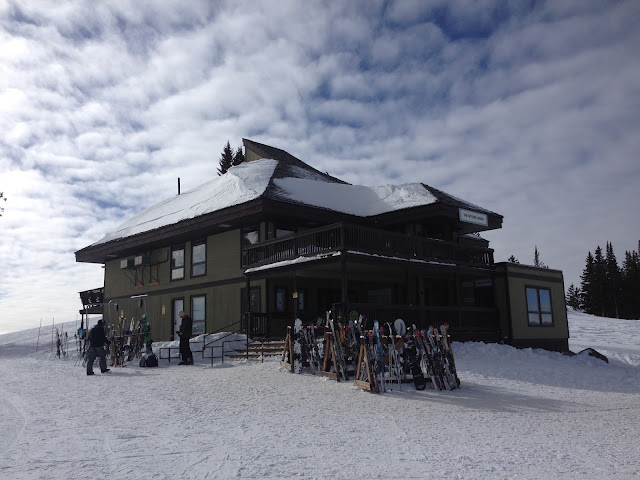 Marie's hang-out for the day. 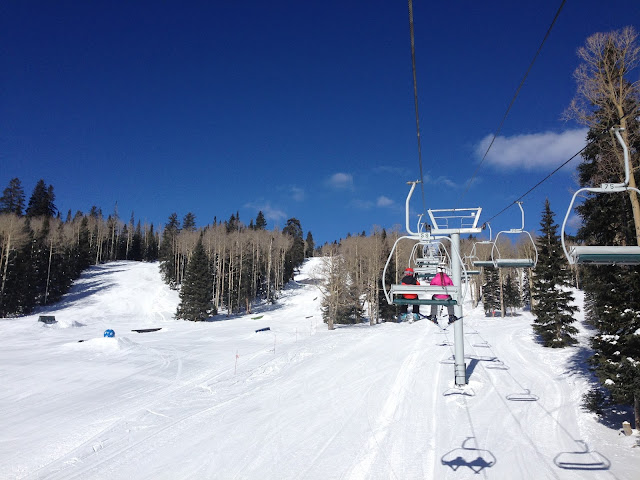 Our first lift was the Monarch triple-chair--highest in elevation of all of the lifts. On the map it looked like a good bet--lots of blue runs. In reality it was a very slow moving lift, with blues masquerading as glorified greens. Happily they were all well groomed and the sun was shining. 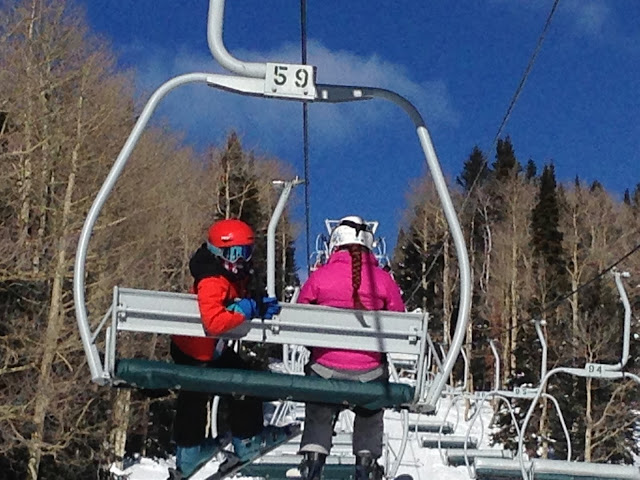 "Can you speed this up?" 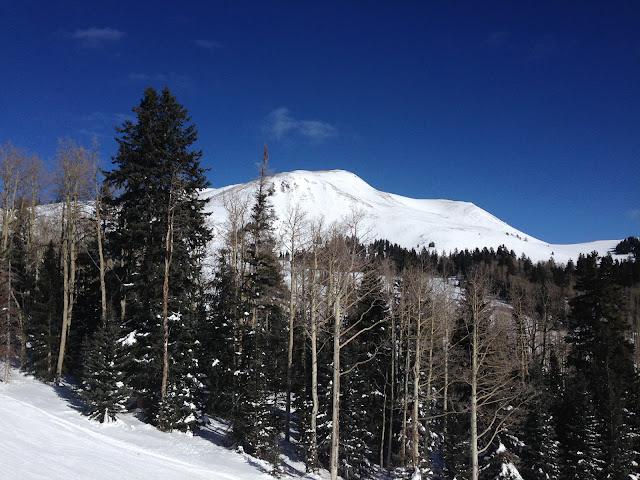 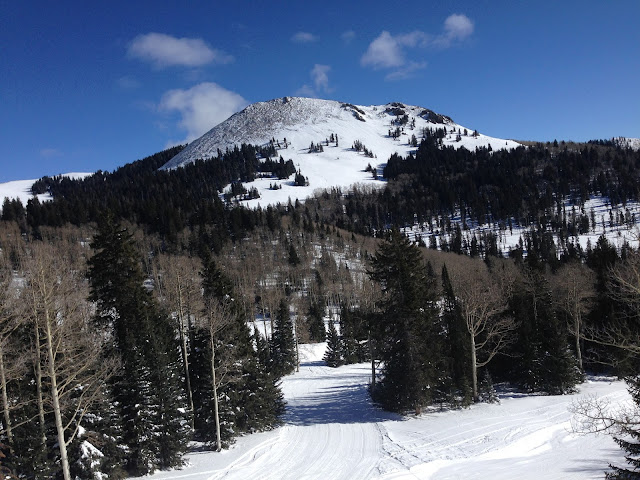 We then gave Skyline double-chair a try.  Just as slow--but also with no lines so that is good. Its one blue run--Elk Meadows--was aptly named. No elk but with an incline of a slightly tipped meadow. Great for beginners. 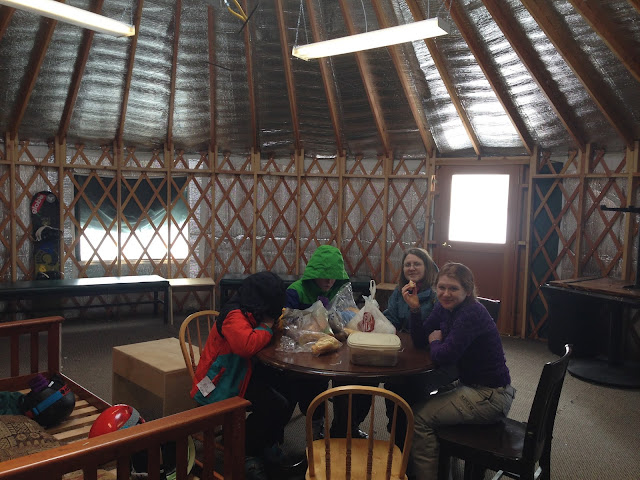 Gourmet lunch in the yurt of brie and cranberry sandwiches on baguettes (something we discovered in England) for the three oldest and ham and cheese for the others. Plus Marie's famous zucchini bread for dessert. 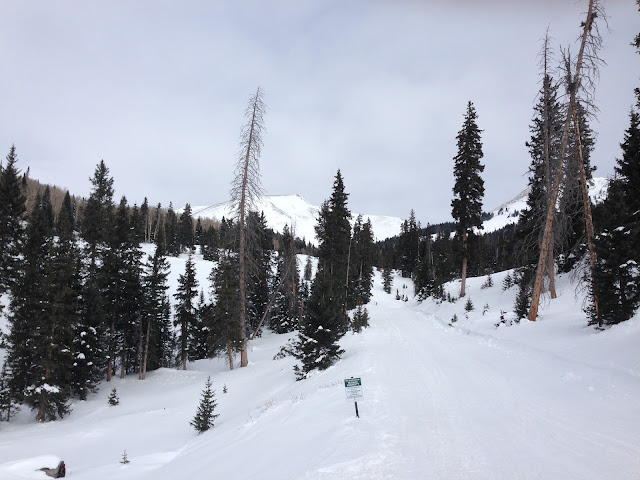 We then headed down to the lower lifts via the valley run of Falling Water which required us to take off our skis and walk across UT 153. It's not often that skiers have to deal with Stop signs. 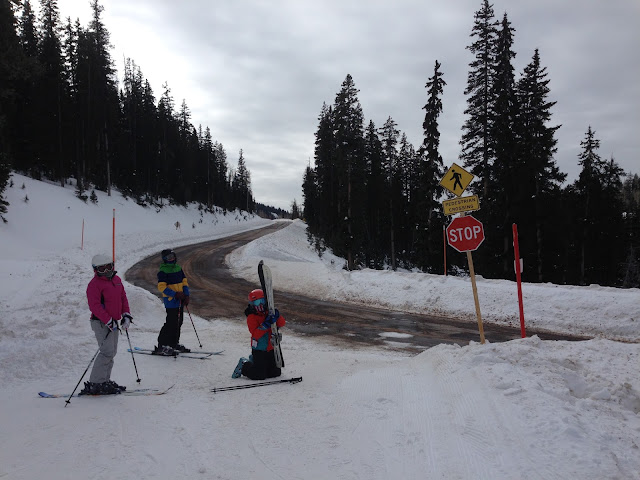 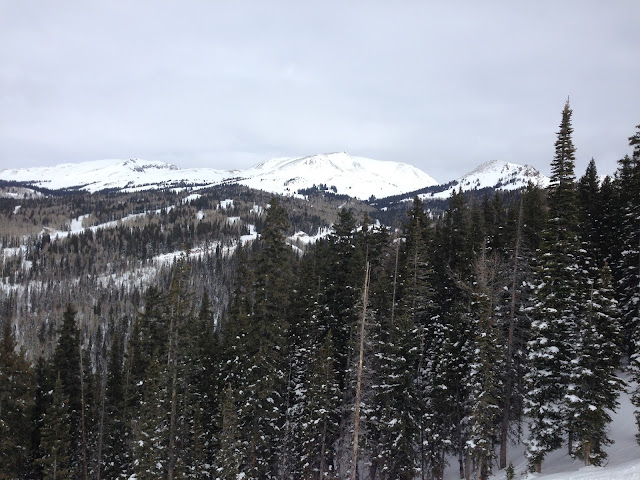 The view eastward from across the resort from Lookout Quad. The Tushar Mountains with Mt. Holly in the center. 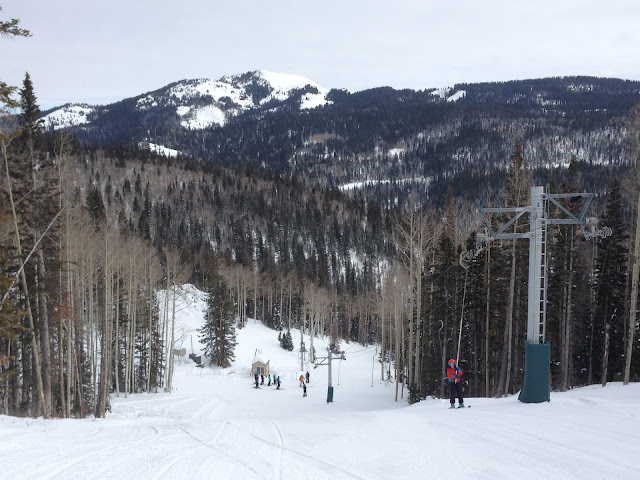 When Elk Meadows closed the resort stood unused for 6 years until its rebirth in 2010 as Eagle Point. In the interim, the chair lift engine room of one of the three lifts in the lower section was flooded. The loss of that lift (whose towers still stand) meant that not all of the runs descending from the crest were accessible, without a hike. So now a trail on the back side of the mountain and a short poma lift ride get skiers to the western-most runs. It took Will three tries to finally get the small disk secured between his legs. 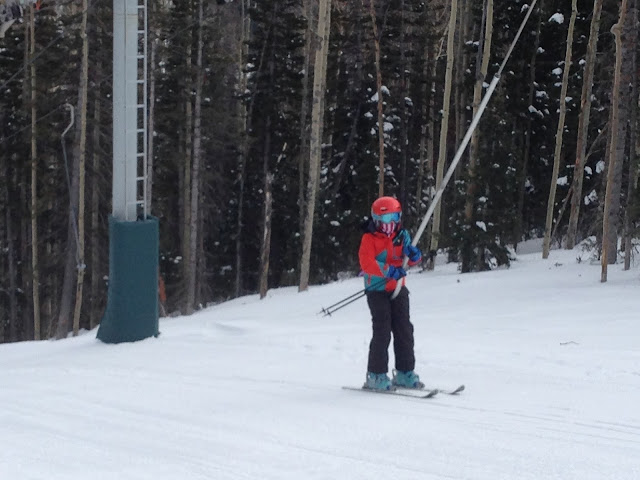 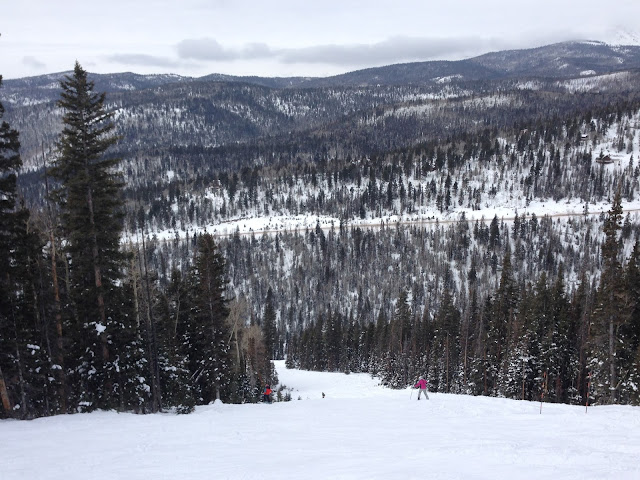 We gave Donner's Descent a try. It was a black. If groomed or covered in fresh powder it would be a nice run, but for us it was a mix of crusty old powder and some packed. We all made it down with only one fall. 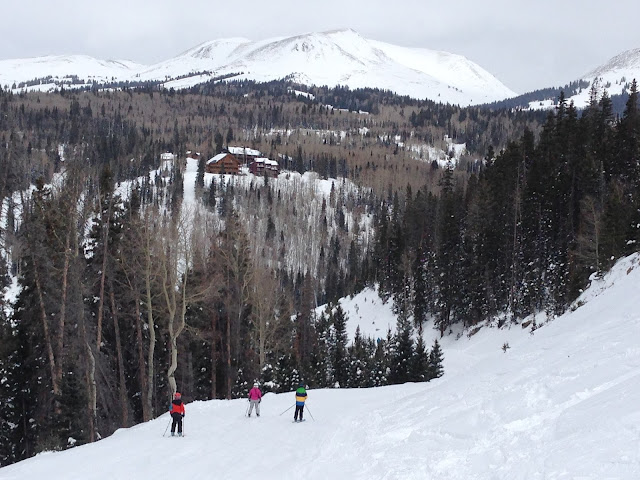 We then took the trail back to the base for a few more runs on the more manageable Tushar and Wolverine runs followed by a quick run on the short (and slow) Canyonside Lift. We then caught a shuttle from the Canyonside Lodge back up for a few last runs on Monarch. All of the staff at Eagle Point were very friendly. Most of the lift attendants are from Beaver who spend their summers farming and winters loading chairs. 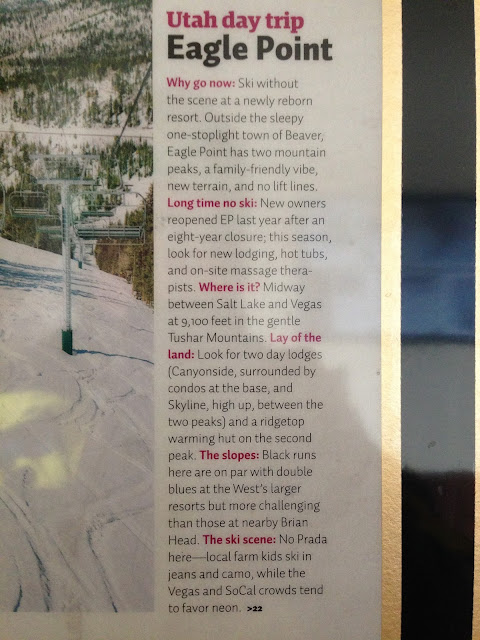 The last line in this framed article in the lodge caught our attention. "No Prada here--local farm kids ski in jeans and camo, . . ." We saw both. 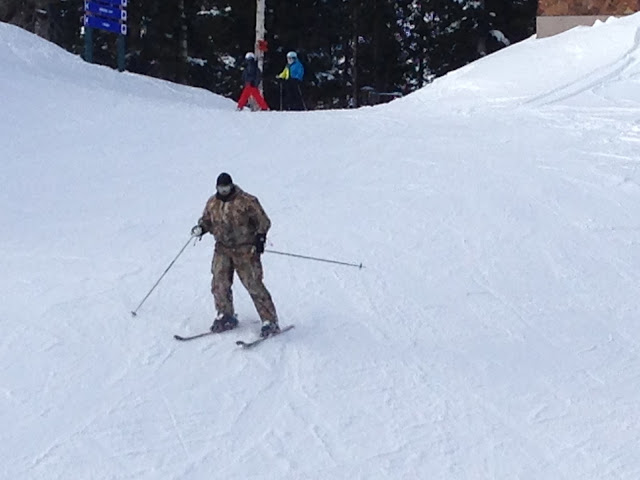 We saw this man skiing under the Monarch lift several times. I had hoped to ask him where he got his camo snowsuit, but we were out of sync. 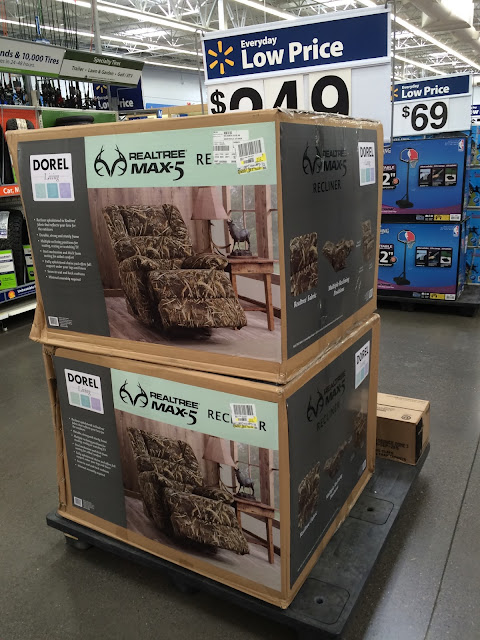 A few days before Christmas Joel texted me this photo of a recliner for sale at WalMart.  He thought I might like it as a Christmas gift. Just think, if I had the recliner and matching snow suit I could sit toasty warm and watch TV all day and no one would know I was there.

All in all it was a beautiful, fun, adventuresome, entertaining day.

Marie talked to a father from California in the lodge. He said that for the price of one lift ticket at Mammoth his family of five (one son has the Ski Utah fifth grade passport) can all ski at Eagle Point. If I were from California and if my kids were novice and beginner skiers, I think a ski vacation at cheap, scenic, good-enough Eagle Point would be a nice option.
Posted by chad at 9:58 PM