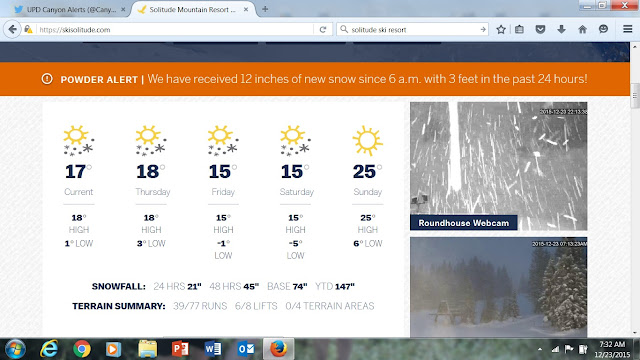 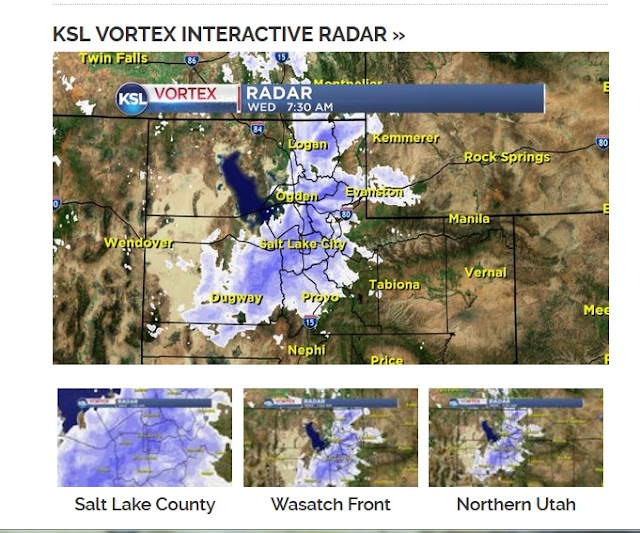 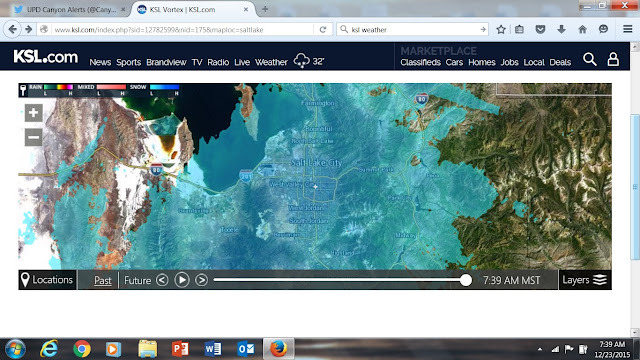 For our second ski resort we chose Solitude. The mountains of Utah has been dumped on with feet of snow over the past few days (mostly rain in the valleys) and I thought that we would better know where to find powder if we went to a familiar resort. When the kids were young we bought ski pass packages at Solitude because it offered free skiing for younger children and cheap passes for older children. Will's first day of skiing was at Solitude. 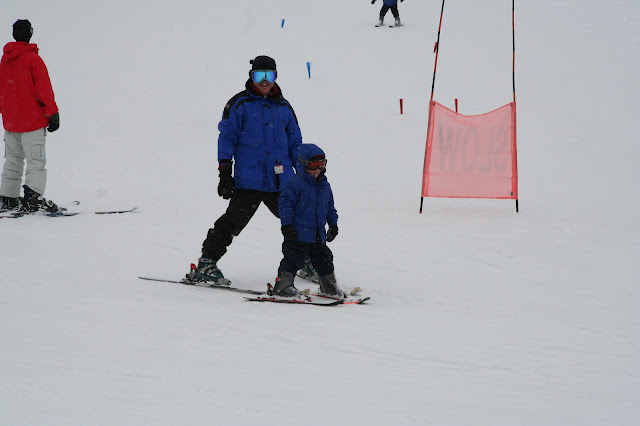 Today was supposed to be another day of snow fall so first thing this morning I checked weather and road reports. We had planned to leave by 8:00 but when I heard the word "squall" combined with images of snow packed roads and weather maps showing a fast moving morning storm, I opted to let the kids sleep a little longer (no school means they are back to staying up later than they should). While loading the car strong winds blew snow into our garage and car. We drove off at 9:00 on slippery snow-packed roads in Springville. I-15 northbound was also slow going. On normal days it is an hour drive from our house to Solitude. Today it took us an hour and a quarter just to get to the mouth of Big Cottonwood canyon. There we found traffic backed up in long lines on all three arteries leading to the canyon.

Favorite and most applicable Christmas Carol on the drive to Solitude--Sissel and the Mormon Tabernacle Choir singing "In The Bleak Mid-Winter." She has an amazing voice.  https://www.youtube.com/watch?v=z6yevmluq2M 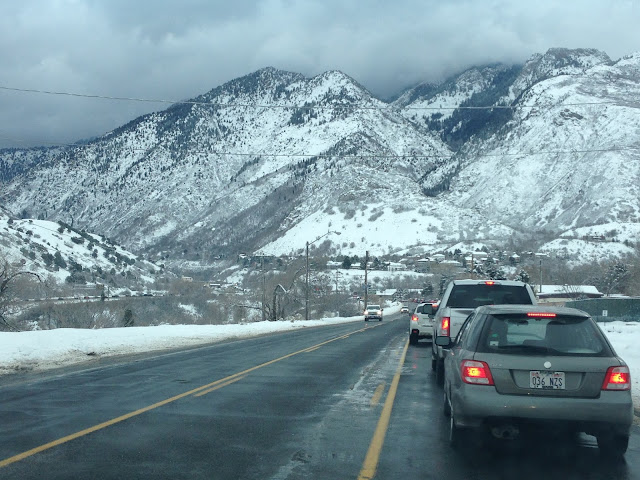 Line-up from the west. Notice the line up from the north (left) in the distance. 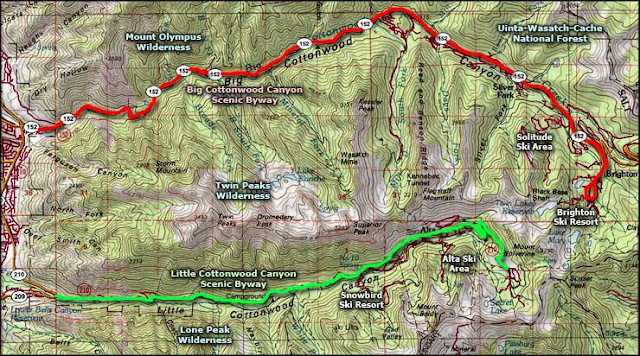 The early morning closure of Little Cottonwood Canyon for avalanche control seems to have sent many skiers to Big Cottonwood. It took thirty minutes to inch up to the point where we finally entered the canyon. From there it was another 30 minute slow drive in a long line up the canyon. Finally at 11:15 we pulled into Solitude's packed parking lot. Luckily ours was the last car allowed to park before putting up the "Parking Lot Full" sign! 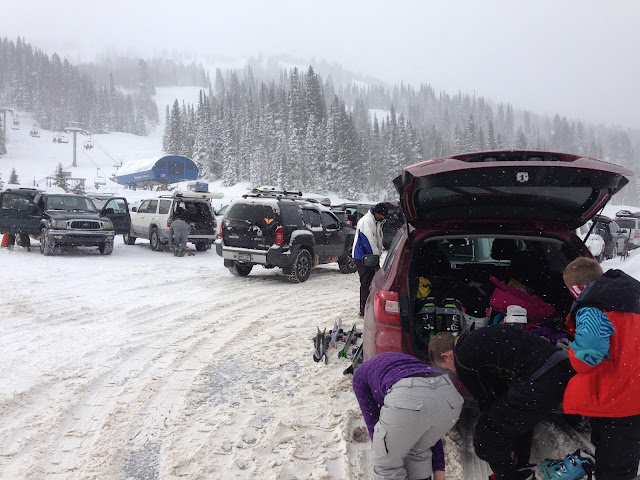 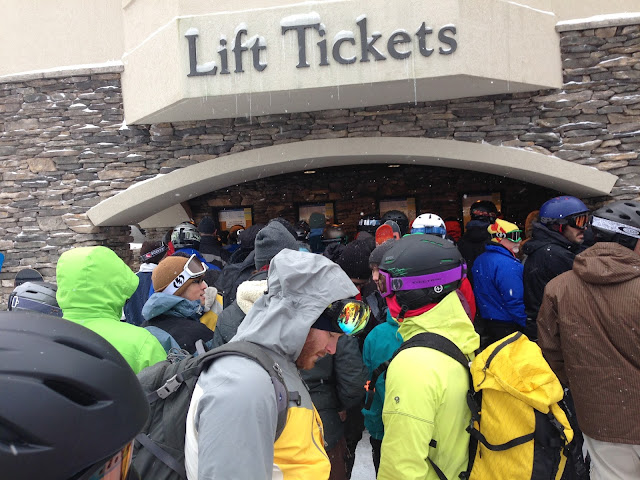 Standing in line for passes was another 30 minute act of endurance. I don't think Solitude anticipated so many "powder hounds." Finally by noon we were on the slopes. Luckily by then the morning snow and winds had died down. 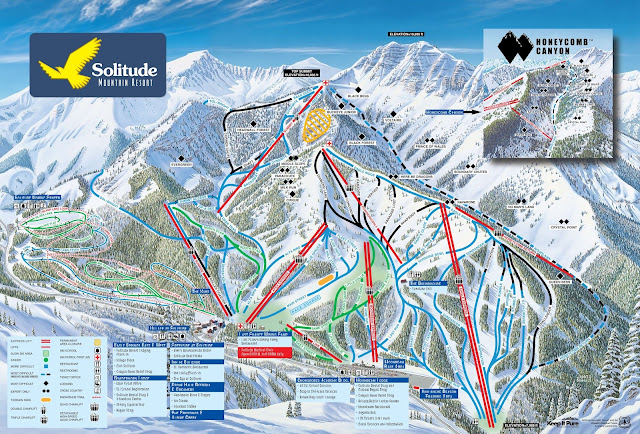 We rode the familiar Moonbeam express up and then skied over to Sunrise Lift. There we had once enjoyed a fun powder day. Joel and I both excitedly ventured forth beyond the packed run to give the powder a try. Unfortunately, it was heavier that Utah's normally light powder and both of us sank in deep.  It was next to impossible to sit back far enough to keep ski tips at above powder level. It was a challenge to get out. Will even gave it a try. He entered the powder from the packed at a good clip and immediately his skis dropped into oblivion resulting in a double release and him opening his eyes to a face full of snow. For the rest of the day we enjoyed the bits and pieces of not-so-deep-powder that still remained among the crud atop the once groomed runs. After two fun runs on Sunrise we rode the Apex Express for a windy run over to the brown-bag lunch room at the Moonbeam base. 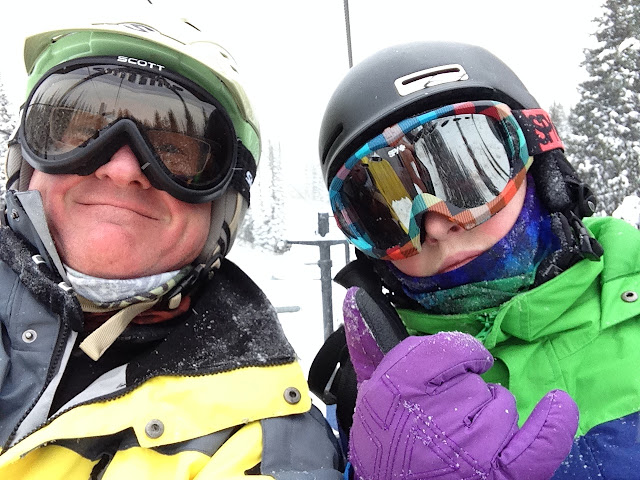 The morning greeted us with early Christmas gifts--National Geographic buffs to keep our faces warm. Will was happiest with his stars and stripes buff (a stars and stripes bandanna was on is Christmas list) which he meticulously positioned to cover everything but his nose. Tonight he has been wearing his buff as a bandanna ala the boys on Duck Dynasty. 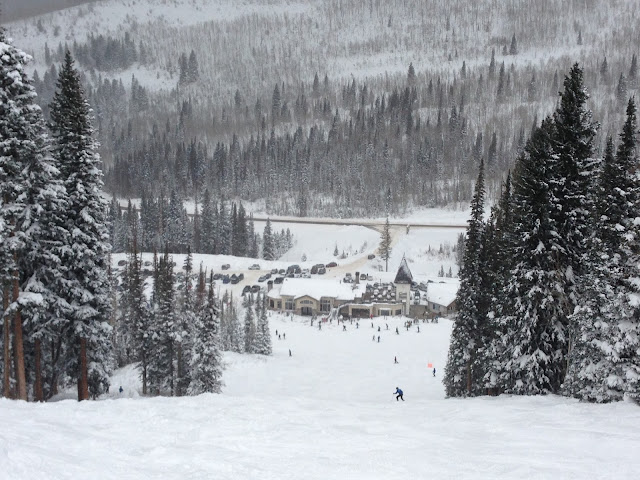 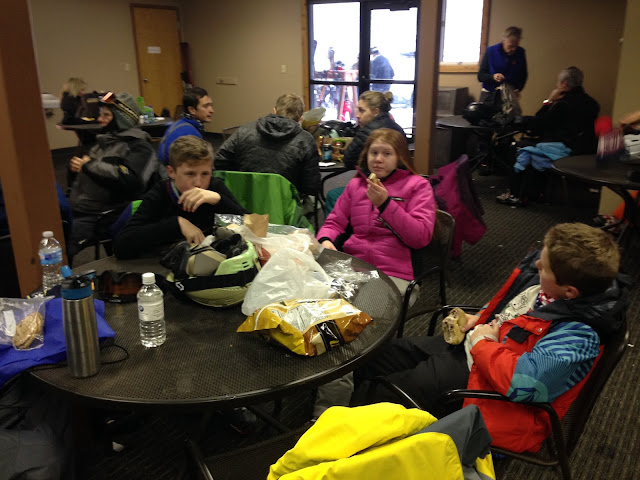 After lunch we skied Eagle Express--with on and off high winds causing blasts and whirlwinds of snow. The kids skied the once challenging Sunshine Bowl without a hitch. It was loose packed with growing moguls. At Joel's urging we then gave Inspiration a try, including the upper section that is black diamond. It too was skied-out crud atop moguls. We all did it with relative finesses. 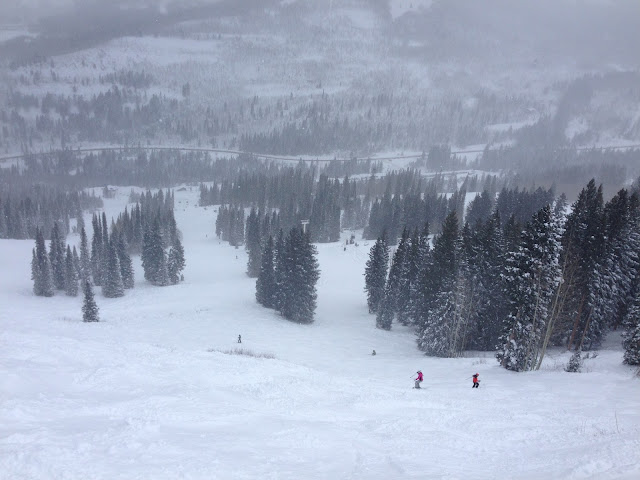 Sarah (left in pink) and Will (right in red) mid way down the black diamond portion of Inspiration. Joel is bottom center below the patch of brush.

Next up was a return to the Moonbeam tree trails that were favorites from years ago. Will was in heaven. Then while Sarah and Joel went to try a run on Powderhorn, Will and I took two last runs for him to explore more tree trails and to try some more powder. 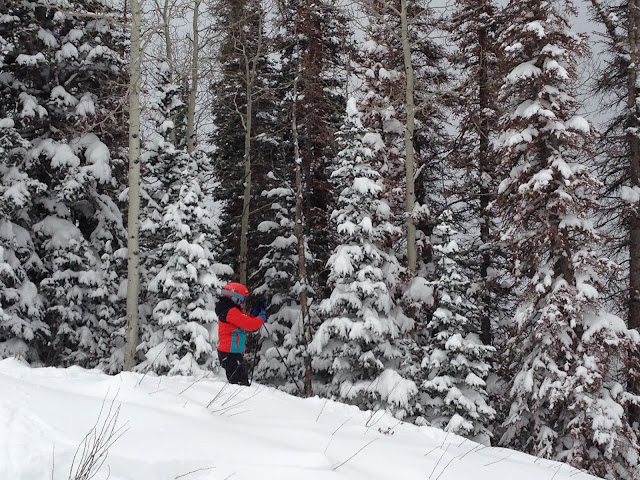 On his second run through this section, Will fell down and couldn't get up. By the time I got to him he had removed his skis and was trying to wade out to the packed run, but then he found a somewhat packed area and was able to get his skis back on. By now the wind and cold were intensifying so we called it quits 15 minutes before 4:00 closing. We all agreed it was a fun, cold, adventuresome day.

We stopped at IKEA on the way home to get some meatballs (they were out of beef meatballs so we opted for a bag of chicken meatballs and veggie balls), gravy and lingonberries for our Christmas dinner. Couldn't resist the cinnamon rolls. They may have to become a post ski day tradition. 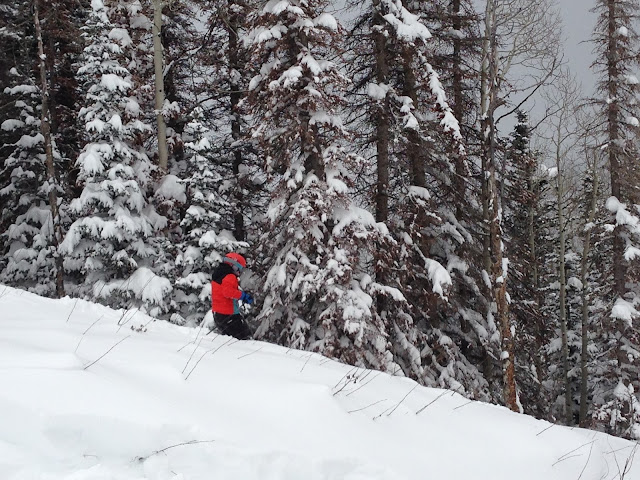 Below: 2011 ski day at Solitude (when I used a real camera and not just my i-phone). At Marie's long time urging, we now all use helmets. She no longer worries as much about one of us crashing head first into a tree. 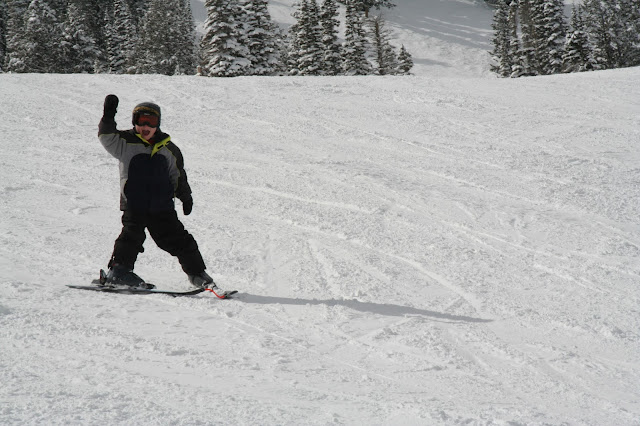 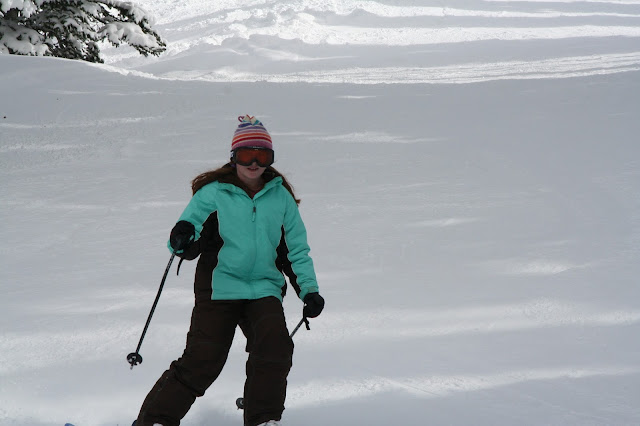 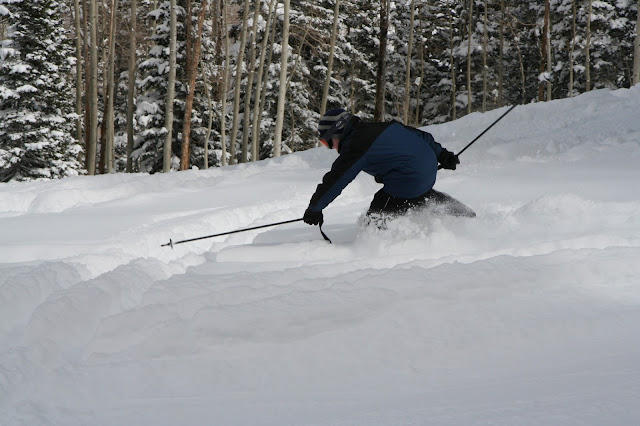 Joel giving powder one of his first tries. Just like Will today the powder grabbed his skis and held them tight. 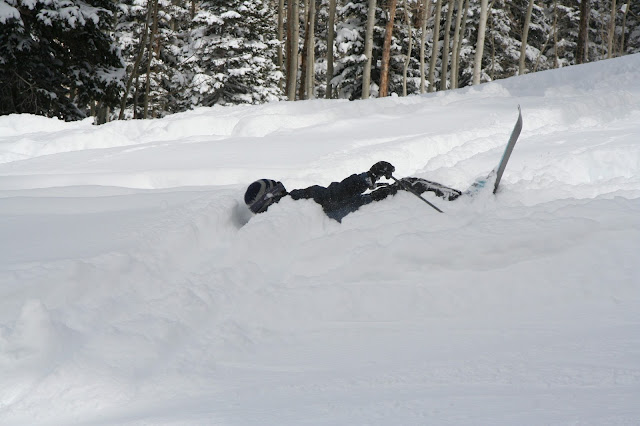 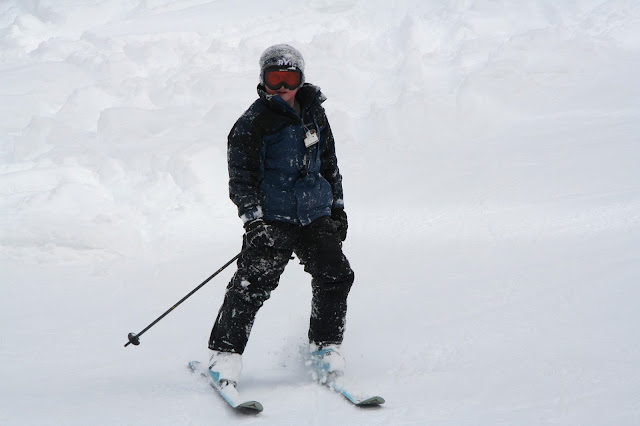