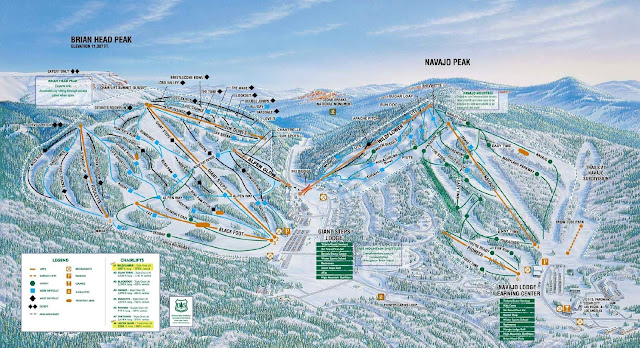 Brain Head was always that far down south resort that was on a different storm path than the northern Wasatch Front resorts. In particular, El Nino years often brought more blessed snow to southern Utah than northern. Brain Head was also the resort where my southern California brother and his family would go for ski vacations with neighbors. Brain Head was always too far of a drive (2 1/2 hours from Springville) for me, especially with many good resorts much closer. Part of the draw of the Yeti pass was that it gave us an excuse to ski more of the far afield resorts.

After our day at Eagle Point we drove south to Cedar City where we enjoyed Panda Express for dinner followed by a swim in out hotel pool. Next morning we joined up with our neighbors the Hodsons--who were staying with grandparents in St. George.

Navajo Lodge was our base. On our first ride up Navajo lift, which runs slowly to accommodate all of the beginners loading and unloading, the lift stopped (someone probably fell while loading at the base) for a few minutes right next to one of the tallest lift towers. Will and I were riding together on a triple with no restraining bar. In recent years my aging body has become increasingly acrophobic--something I never felt as a child while sitting on the edge of chair lift chairs at Beaver Mt. It is usually easily remedied by pulling down the chair bar/ foot rest or by sitting on one of the ends of the chair (on triples and quads) so I have something to hold on to. It seems my acrophobia only happens in unrestrained heights. Today for some reason the tall tower, no bar, and Will's almost non-stop movement all combined to make me particularly nervous. I held on to the side bar, closed my eyes and told Will to sit still. Once we started to move I was OK. 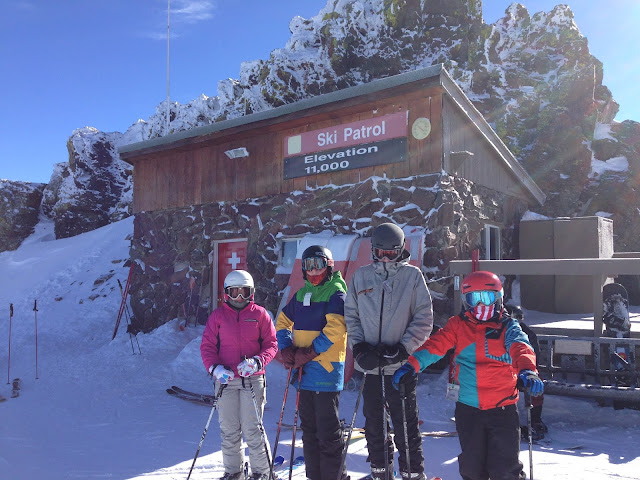 The ride up the fast moving Giant Steps Express (a quad) was no problem at all. Here are the kids and Isaac at the top of Giant Steps. 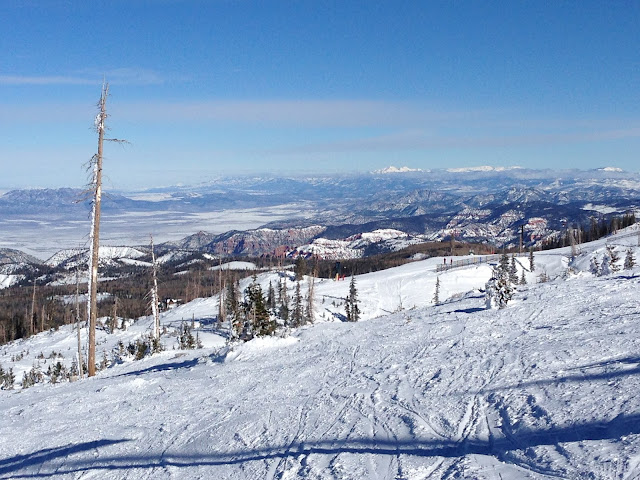 From there we could look northward to the snowcapped Tushar range, including Mt Holly (top center right). 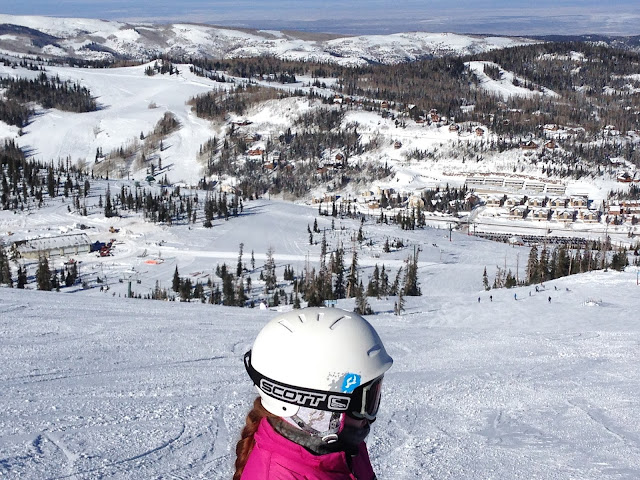 Looking westward to the base and Navajo Mt rising above it. 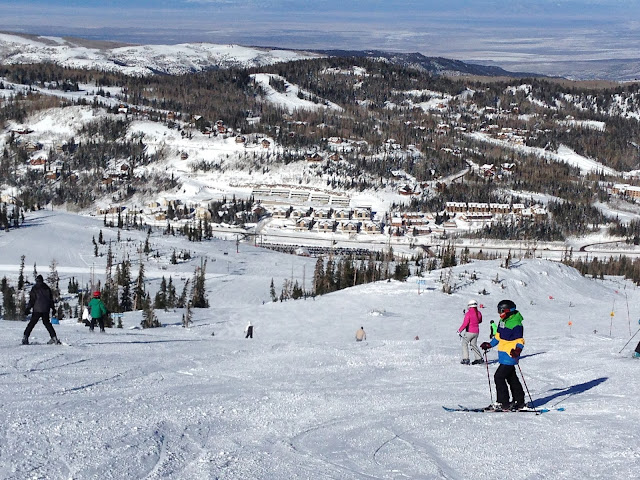 A sunny morning on Sunburst. 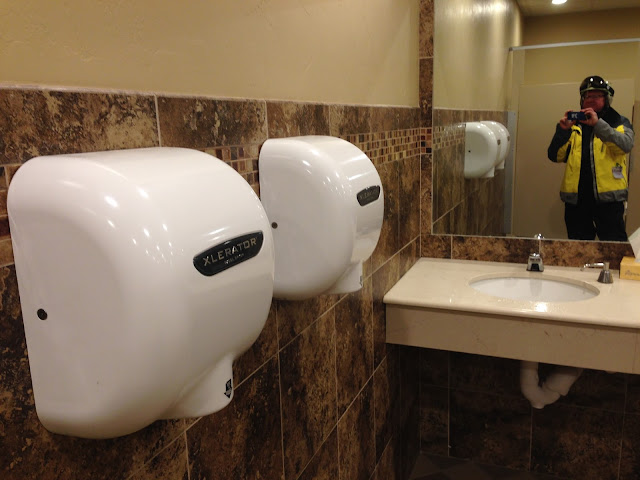 Lunch break. One thing I appreciate at ski resorts are quality ways to dry hands. Ranking highest are the high powered, quick acting, water erasing driers like the Xlerator. Next up are paper towels. At the bottom of the list are the low powered old time hand driers that take several minutes, if lucky, to dry hands. I have little patience to use these through to completion. If given a choice I go for the quicker paper towels. Unfortunately towel dispensers (for reasons that I support and agree with) are quickly disappearing from ski resorts. In warmer weather I am OK with air drying hands, but that doesn't work well with putting on gloves and going out in the cold. Thanks Brain Head for installing these. 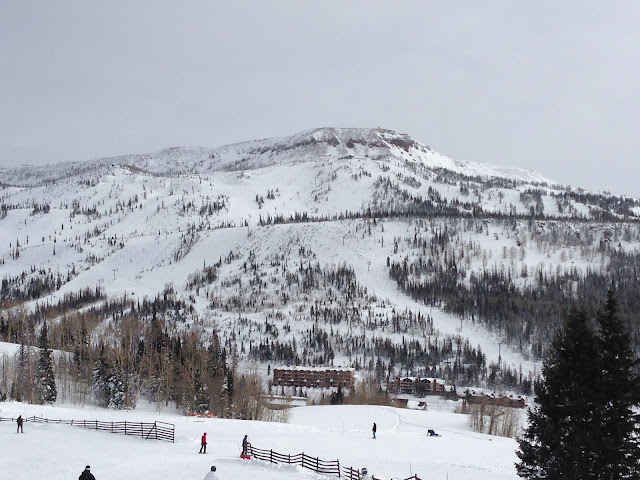 Clouds and cold rolled in in the afternoon. Here is a view of Brain Head Mt. from the top of Navajo lift. 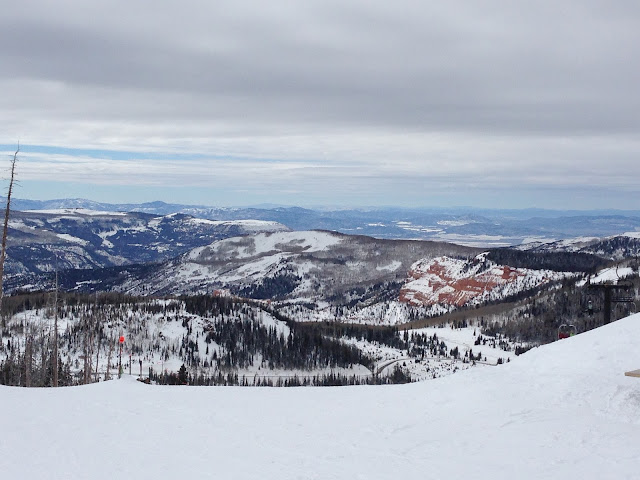 Looking southwestward from the top of the Dunes lift to some of the red rock formations of magnificent Cedar Breaks.

Two of our last cold runs were on Roulette lift down Wild Ride and Hard Times. The runs were lined with hundreds of pine/fir saplings no more than two feet above the snow (perhaps the result of a forest fire a few years ago). I tried to take a photo, but by now my i-phone was too cold to start up. We all enjoyed going off piste in a few inches of powder to dodge the small trees. Will and Isaac are the two mostly likely to seek jumps, powder and adventure in between the runs. They are also the two most likely to crash.

We headed north on I-15 at 3:45. Between Beaver and Fillmore blowing wind and light flurries brought holiday traffic down from the 80 mph speed limit to a safer 20-40 mph. Several cars slid off the road and we passed one roll-over. It was pretty tense. Gratefully the Subaru did just fine (at appropriate for the weather speeds).  I offered to let Marie drive a spell. She happily turned me down. Finally at about Payson the storm let up. The drive was a good opportunity to teach the kids some winter driving techniques and etiquette: slow down on snowy roads; increase the distance between cars; instead of constant braking use lower gears when going down inclines so you do not have to break on and off so much; take your foot off of the accelerator as a method of slowing down; stay in the right hand lane so faster vehicles can pass; don't brake and slow down when passing accidents on the other side of the freeway; listen to good music. We safely arrived at home at 7:30, 45 minutes later than usual.
Posted by chad at 9:48 PM