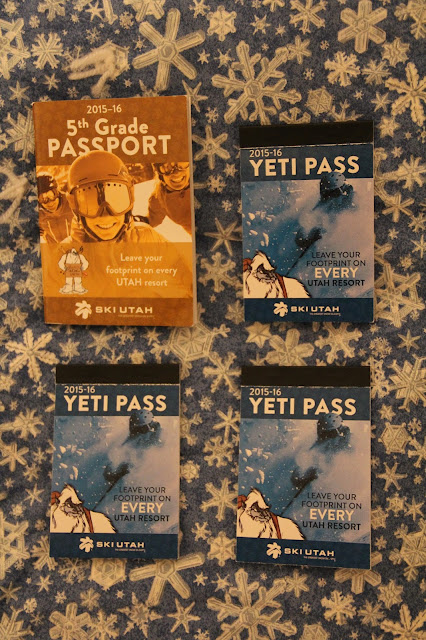 In an effort to "hook" more Utahans on the joys of skiing, years ago Ski Utah developed a passport program that allowed all fifth graders in the state to ski three times for free at each ski resort in Utah. A sixth grade passport allows for one free day at each resort. We enrolled both Sarah and Joel in this program and enjoyed skiing at a few more resorts that usual, but it was still cost prohibitive for the rest of the family to buy high priced day passes at places like Deer Valley and Park City. To make it easier for family members to join with their passport holders, Ski Utah also came up with the Yeti (Abominable Snowman in Tibetan) Program. For the comparable cost of a season pass to a single resort, the Yeti Pass includes 14 passes, one for each resort in Utah. I have long wanted to give it a try. With Will in fifth grade and with all three children now able to easily ski blue runs and some blacks, I decided that this was the year. Thanks to the Twin Pine inheritance fund from John and Norda Emmett, we were able to buy three passes for Dad, Sarah and Joel and we were able to put a down payment on a new red Subaru Outback to carry us throughout the state on snowy roads without the fear of a third-time ski-trip towing of our aging green Subaru.

So our quest for this winter is to ski all 14 ski resorts in Utah. It will not be easy. There's incessant demand to go see Star Wars (tickets now bought for next Monday morning), there are grades to submit and two new courses next semester for me to prepare for, there's a soccer tournament for Joel in Nevada one weekend, and, for way too many Saturdays in February and March, there are dance practices for youth from Springville and Provo to prepare for the Provo City Center Temple opening cultural extravaganza. Plus there is also the fear of not enough snow. We are praying that few to none high pressure systems settle in over the state diverting storms to the north and south and that many el-Nino storms wend our way.

Since we only get to ski once at each resort, we have been waiting till there has enough snow for resorts to have all lifts up and running. Today we decided to ski Alta, the grand dame of Utah. Since it gets the most annual snow fall in Utah we decided it would have fewer rocks and twigs to dodge. Added bonus was that Aunt Diane and Uncle Lant, cousin Hannah and husband Mike, and cousin Luke and wife Emily were planning to ski Alta too.

We were up and out the door by 8:10 (early for us). It is an hour drive north along I-15 and then up steep Little Cottonwood Canyon. It took a little longer to get ready given some of us were having to adjust new boots, goggles or poles.

We stared out skiing some fast, fun groomers on Collins and Wildcat lifts. Ventures off trail in search of Alta's famed light powder reveled only crusty crud that was hard to ski. We next braved high winds on Sugarloaf. They pelted our faces riding up, but created a fun flurry of tail winds and whirl winds as we descended. We then skied the one groomed run (and another try at the crud) on Supreme. 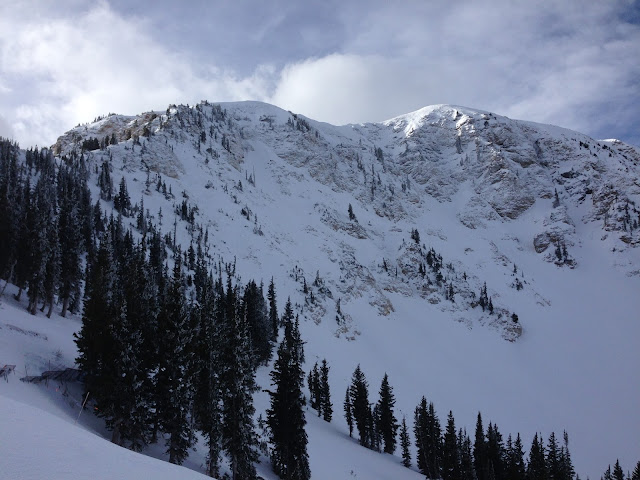 Morning sun on Mt. Baldy. The Balllroom below was not yet open (sorry Bill no hiking here). Throughout the day there were occasional loud booms of avalanche prevention shots. 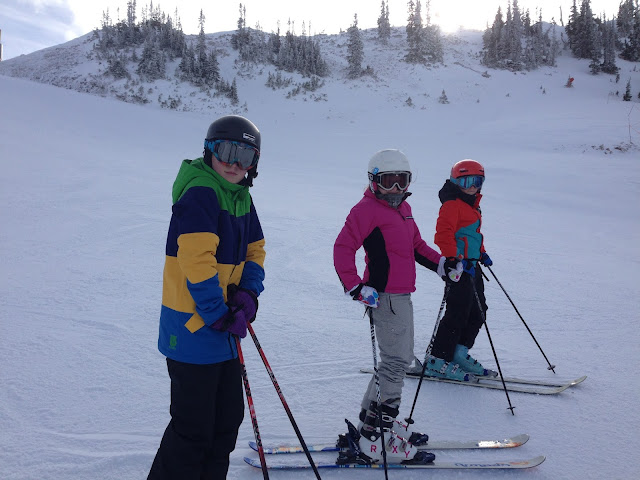 My three favorite ski buddies. Joel is a regular at speeding past me these days. 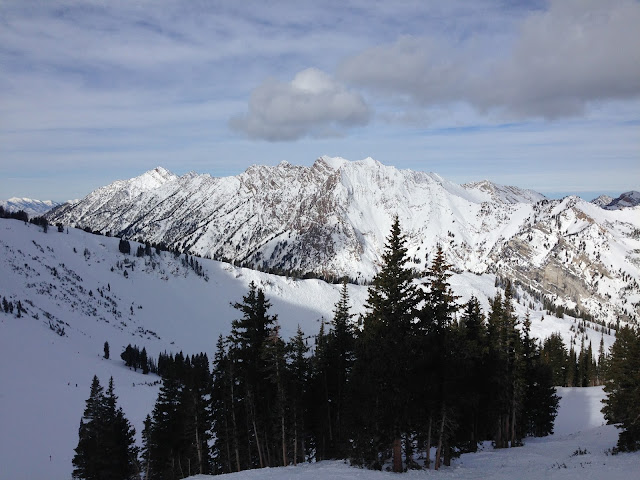 From the top of Collins lift looking down into Little Cottonwood Canyon. 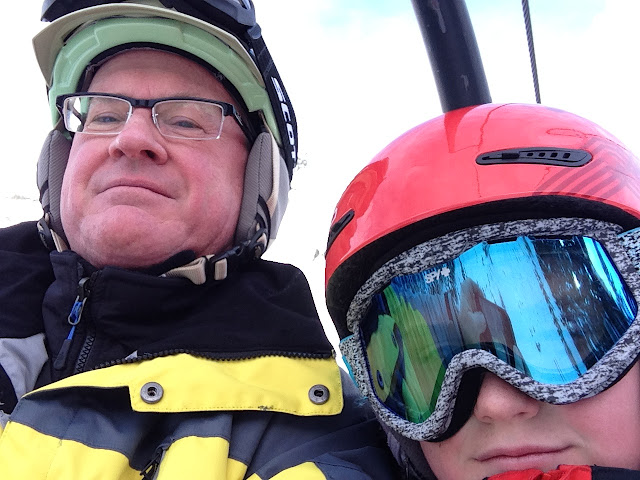 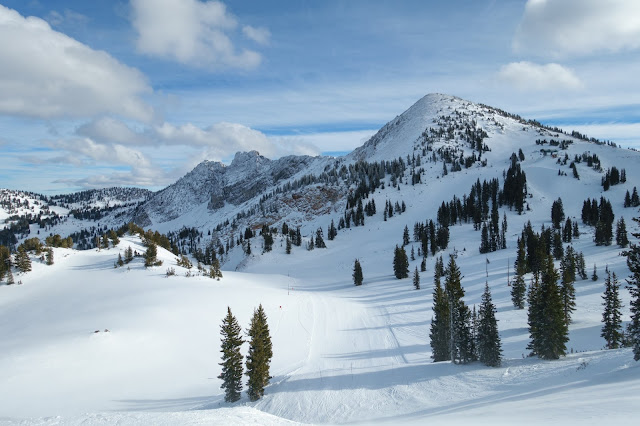 From the top of Collins lift looking across to the top of Sugar Loaf lift in the distance. (photo courtesy of Mike Nelson) 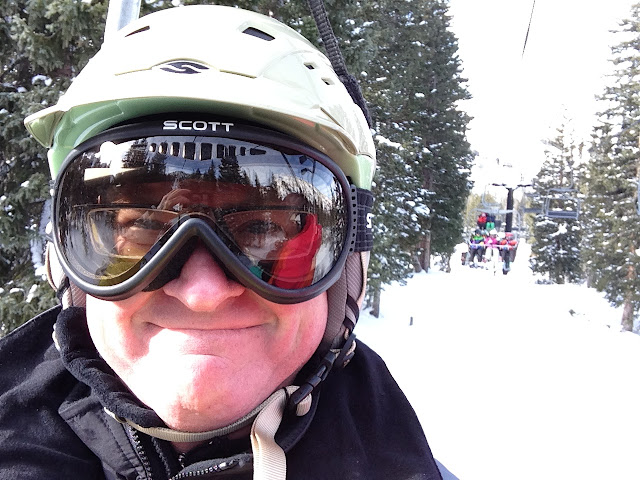 Secret Lift (triple) with three kids behind in the next chair. 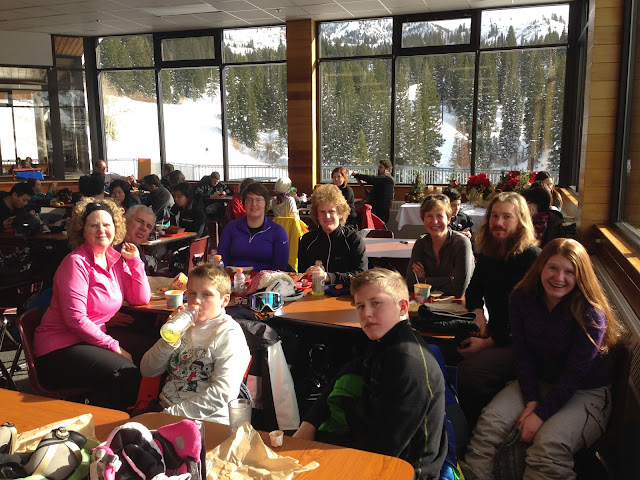 At 1:00 we met the Lant and Diane (Marie's sister) Pritchett family for lunch at the Albion Grill. I quite enjoyed my lentil/chick pea soup. Cheeseburgers for the boys, hoagie sandwich for Sarah and fries for all of us. 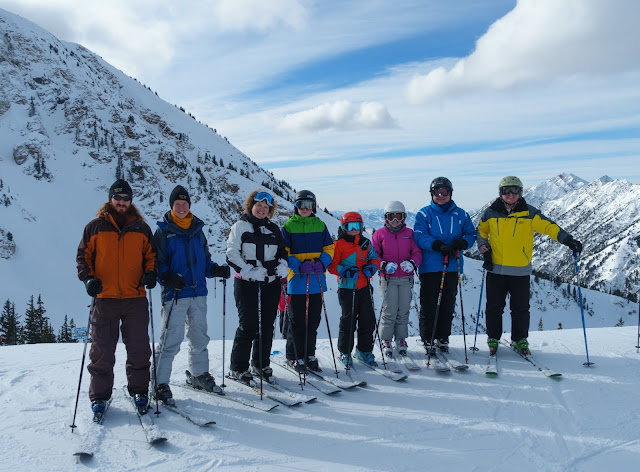 We all then took a few runs together. By 3:00 our legs had given out so we headed to a ski shop in Sandy to get my boots adjusted and to buy some new boots for Sarah to replace her old shin bruising boots. The next 13 ski days will be much more comfortable for her. We are looking forward to the storms heading our way this next week. Next ski day Tuesday or Wednesday. 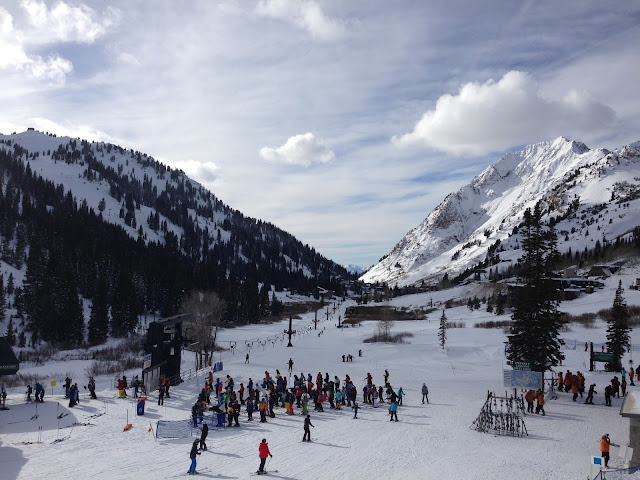 Looking west down the canyon from Albion Base. All skiers, no boarding allowed at Alta--which makes for a nice day of not having to figure out the erratic moves and different ski line of nearby boarders. 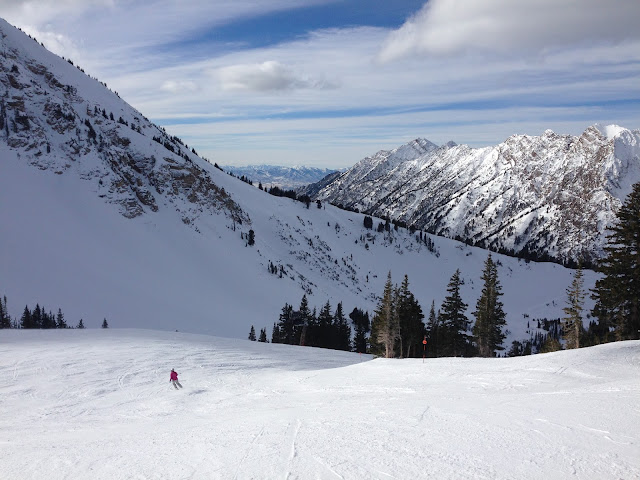 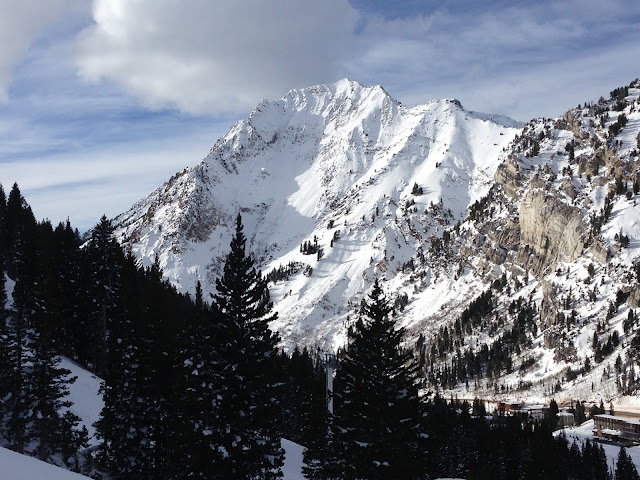 A bright, clear day on mountain top and even in the valleys driving home. 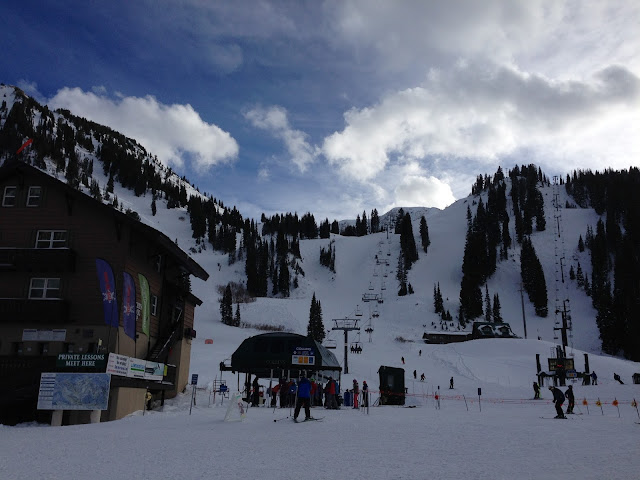 Base of Collins (l) and Wildcat (r) 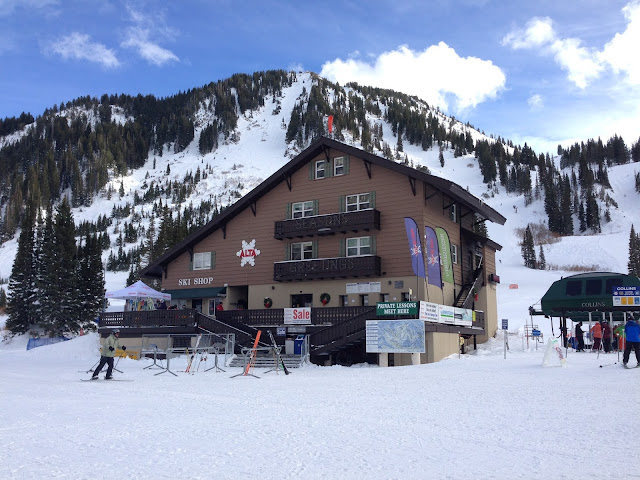 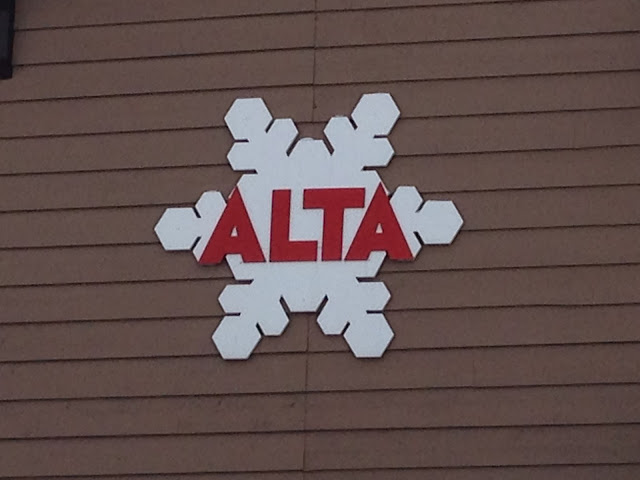 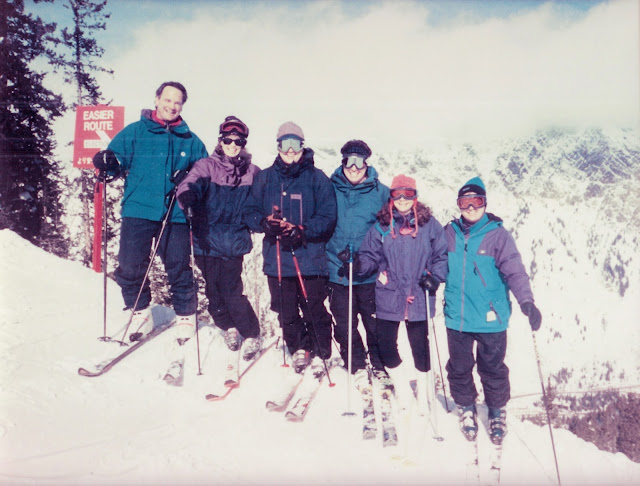 As a child we would ski as a family at Alta maybe once a year--often on a day off from school (the kids are hoping we may have a few school day ski days during this year's quest).

One memory from those early years happened while skiing on Sugarloaf. Dad and the three older boys were skiing one run while mom and young Jake (6 or 7) were skiing an easier run. An unusual lightening storm came through which closed the lifts. Dad and us older boys ended up waiting at the base of the lift for Jake and mom to come, but Jake's ski binding (cubco) had broken midway down the run leaving mom to fed for herself with no once else still on the run to help her out and no way for dad to go up and rescue them. I can't quite remember, but in the end I think they ended up walking down the mountain.

It was in the old Watson Shelter at mid mountain that I had my first ever bratwurst with sauerkraut.

Other memories include many great days of powder skiing with my brothers on North Rustler after the long high traverse or on Baldy's shoulder after another long traverse. Powder days at Alta can't be beat. Skiing with family at Alta, can't be beat.