1 The same day went Jesus out of the house, and sat by the sea side.
2 And great multitudes were gathered together unto him, so that he went into a ship, and sat; and the whole multitude stood on the shore. 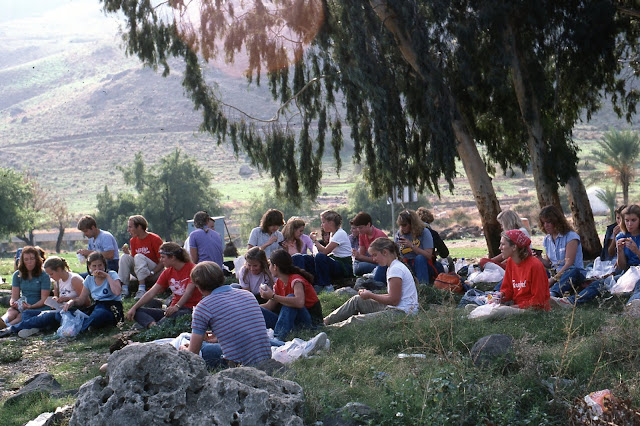 BYU Study Aborad students studying on the shore of the sea, 1982. 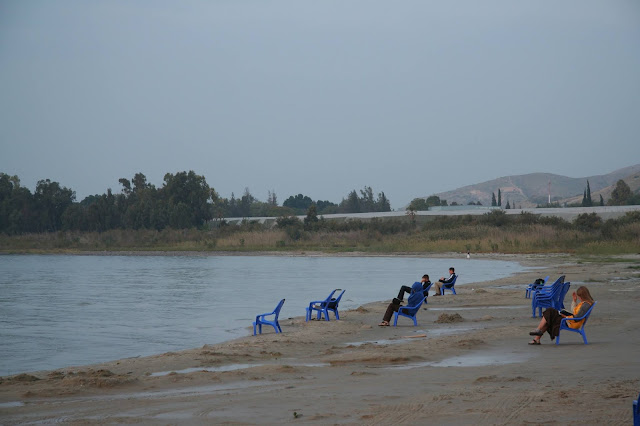 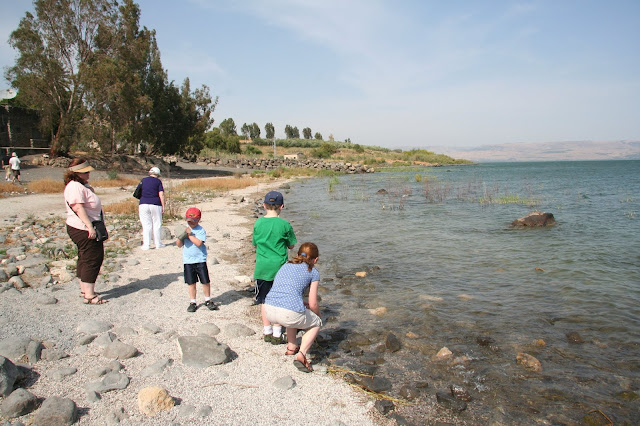 Matthew 13:
3 And he spake many things unto them in parables, saying, Behold, a sower went forth to sow;
4 And when he sowed, some seeds fell by the way side, and the fowls came and devoured them up:
5 Some fell upon stony places, where they had not much earth: and forthwith they sprung up, because they had no deepness of earth:
6 And when the sun was up, they were scorched; and because they had no root, they withered away.
7 And some fell among thorns; and the thorns sprung up, and choked them:
8 But other fell into good ground, and brought forth fruit, some an hundredfold, some sixtyfold, some thirtyfold.

18 ¶ Hear ye therefore the parable of the sower.
19 When any one heareth the word of the kingdom, and understandeth it not, then cometh the wicked one, and catcheth away that which was sown in his heart. This is he which received seed by the way side. 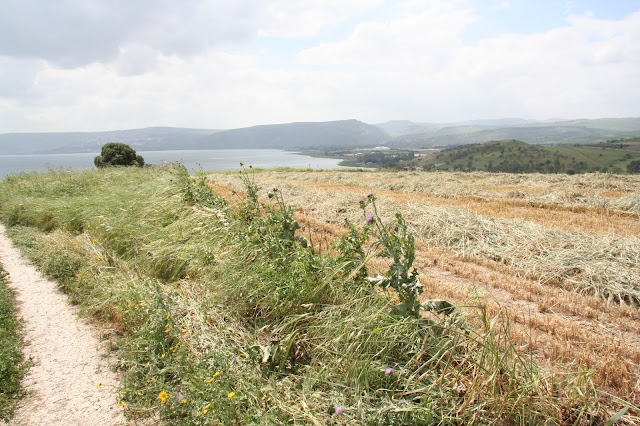 For more about the parable of the sower please see this blog post: http://beitemmett.blogspot.com/2018/12/shs-we-are-responsible-for-our-own.html

A personal experience with this parable:

In the 1980s when I was living in the suburbs of Washington DC, I was called to serve in the College Park Ward to help with all of the Cambodian, Laotian and Vietnamese refugees who were joining the church. (Read more about my experiences here: http://beitemmett.blogspot.com/2011/11/memories-of-cambodians.html ) It was a challenging, fulfilling, and frustrating calling. Frustrating because there were so many new converts and so few willing workers to help them. Eventually a branch was organized specifically for all of the Southeast Asian members. I was called to be a counselor in the branch presidency.

I worked very closely with the missionaries assigned to he Southeast Asian program. From them I learned that the DC mission was at that time the highest baptizing English speaking mission. Most of those baptisms came from the four mostly Cambodian branches in the DC suburbs. The mission president was very supportive of the Asian program and was even willing to fudge on a few rules now and then to help out. For example, this meant that when needed the Asian missionaries could transport investigators and members in their cars to church meetings and baptisms.

One evening early in the week I got a call from the missionaries. They wanted to arrange a baptism for Wednesday night, the last day of the month and needed me to schedule the use of the building and to attend the baptism. The elders told me that they had taught the family a few times and they had promised to come to church for the first time that past Sunday but then they didn't come. Later that day, the mission president called the missionaries to inquire if there would be any more baptisms before the end of the month. The elders explained about the one hopeful family who looked promising but had yet to attend church. The mission president then told the elders that he wanted them baptized that week, by the end of the month. The elders felt that this was all motivated by the mission president's desire to keep the monthly baptismal rate high.

A little while after this unique and frustrating situation, I attended a Saturday night stake leadership meeting which was also attended by the mission president. I was 28 years old and not yet married. He was successful businessman now serving as a successful mission president. After the meeting I mustered up my courage to go up and speak to him. He knew who I was from all of the work I had done with the missionaries. I can't remember all of the details, but I think I thanked him for all of his support for the Asian program. Then I laid out my frustrations of serving in a branch whose membership was growing exponentially while the few of us in leadership callings were feeling swamped and were not being reinforced. I told him that there were too many new members and not enough people to properly fellowship them. I told him that I was fearful that we would lose many to inactivity. I also told him that baptizing them before they were fully ready was only adding to the problems. I did this all respectfully and in hopes that he could help out by working with our Stake President (I had petitioned him unsuccessfully a few months earlier for more help) to call more people to help in the branch and by not moving up baptisms.

He then responded by referring to the parable of the sower. He said that it is only natural for some members to fall by the way side or among rocks and not grow, or to be choked out by thorns and thistles as they grow. His view was that all he and the missionaries were responsible for doing was getting people baptized. I was shocked, but I didn't know how to respond. Driving home that evening I started to fume. I started to think about the parable and its interpretation. When I got home I read the parable. Next morning I typed a long letter to the mission president. In it I explained that the parable was about believers (see verses 18-23 in Matthew 13) and how they grow in the gospel. I told him that I understood that some would certainly fall away, but that it was all of our responsibility to make sure the new converts were planted in the fertile soil. I said that too often it is as if we would throw the new members onto the way side or into rocky and weedy soil. We were impeding their ability to grow by not having a fully staffed branch and by being more concerned about baptismal numbers and not about baptizing believers. Basically I told him that he was using the parable to justify neglect and to assuage feelings of guilt that might arise when some did fall away. I saw the parable as a command to nurture and support. Writing the letter was very cathartic for me. It felt good for me to think about what Jesus was teaching and how it applied to my current situation. I never sent the letter, but I still remember how one parable of Jesus was interpreted in two very different ways.

Matthew 13:
24 ¶ Another parable put he forth unto them, saying, The kingdom of heaven is likened unto a man which sowed good seed in his field:
25 But while men slept, his enemy came and sowed tares among the wheat, and went his way.
26 But when the blade was sprung up, and brought forth fruit, then appeared the tares also.
27 So the servants of the householder came and said unto him, Sir, didst not thou sow good seed in thy field? from whence then hath it tares?
28 He said unto them, An enemy hath done this. The servants said unto him, Wilt thou then that we go and gather them up?
29 But he said, Nay; lest while ye gather up the tares, ye root up also the wheat with them.
30 Let both grow together until the harvest: and in the time of harvest I will say to the reapers, Gather ye together first the tares, and bind them in bundles to burn them: but gather the wheat into my barn. 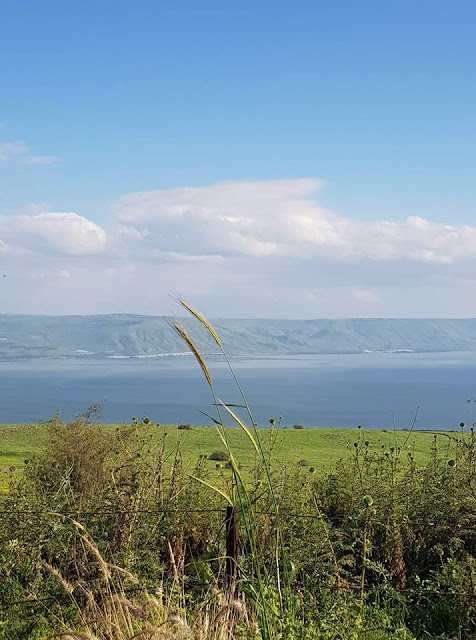 Tares. Photo by my friend Ann Hansen, resident of the Galilee. 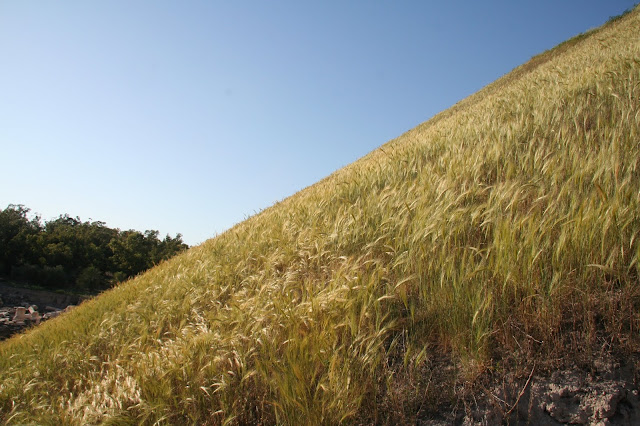 Perhaps tares on the uncultivated slopes of the old testament tel of Beit Shean. 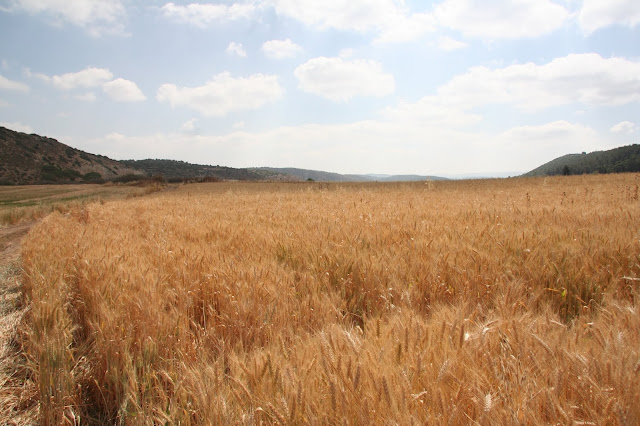 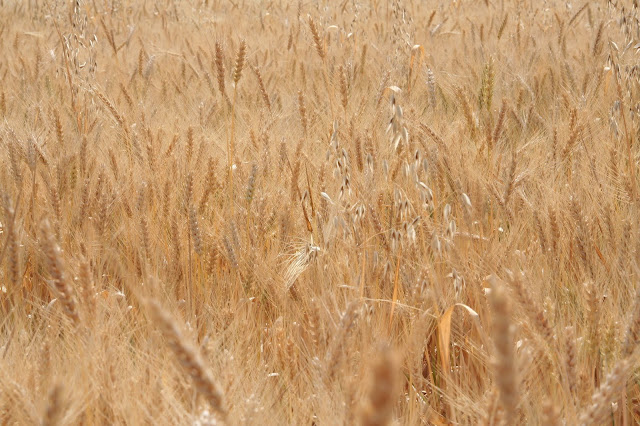 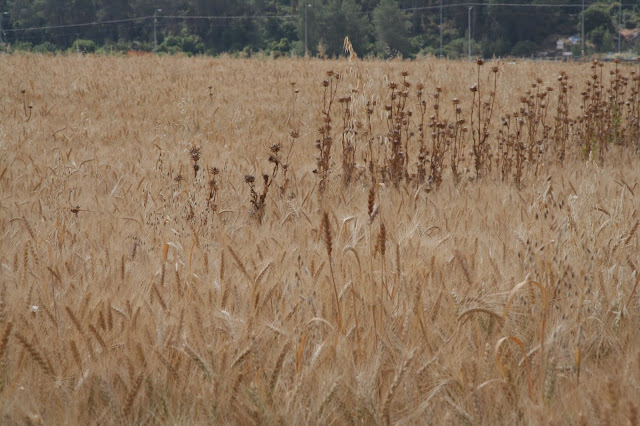 Wheat field in the Valley of Elah. 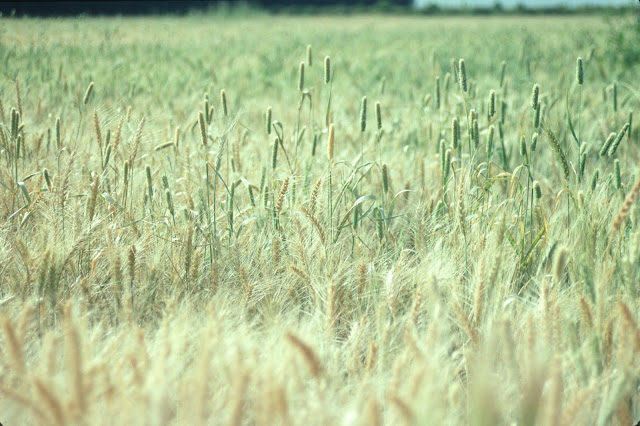 Wheat and some other plant with columnar shaped seed heads growing in the Galilee. 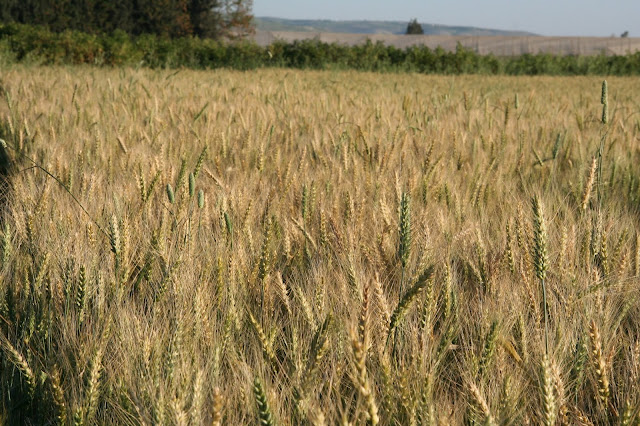 Wheat fields south of the Sea of Galilee 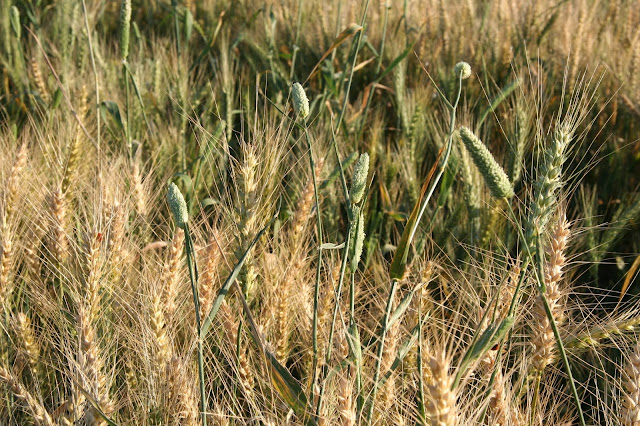 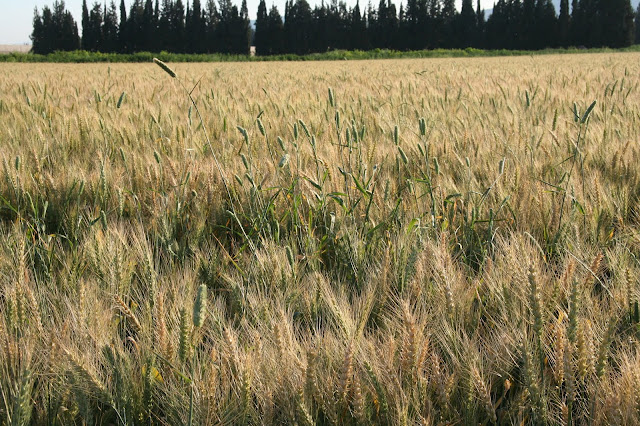 Matthew 13:
31 ¶ Another parable put he forth unto them, saying, The kingdom of heaven is like to a grain of mustard seed, which a man took, and sowed in his field:

32 Which indeed is the least of all seeds: but when it is grown, it is the greatest among herbs, and becometh a tree, so that the birds of the air come and lodge in the branches thereof. 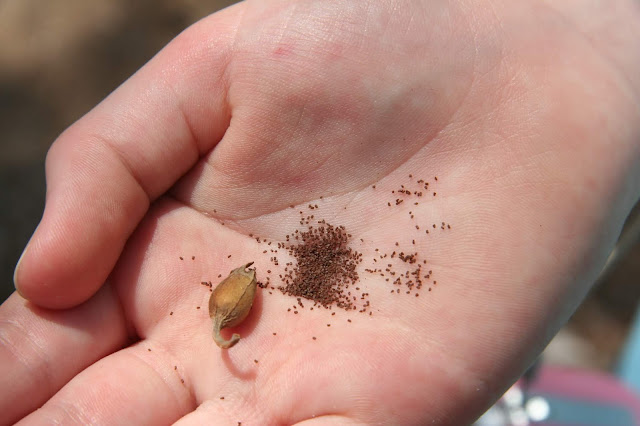 Sarah's palm full of mustard seeds and a seed pod. 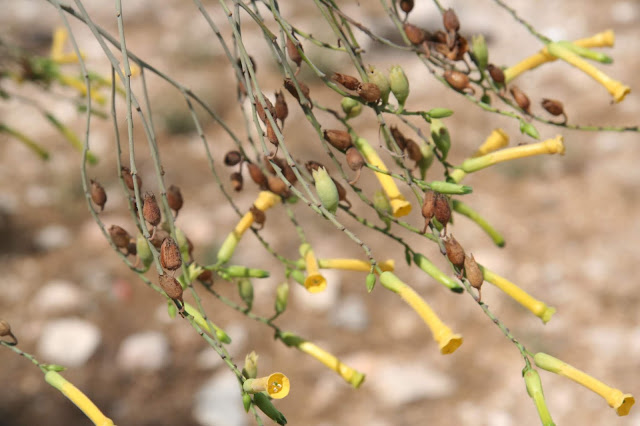 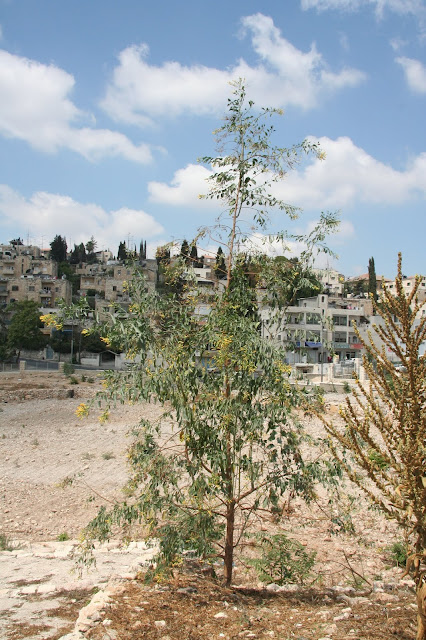 Mustard tree in the Kidron Valley 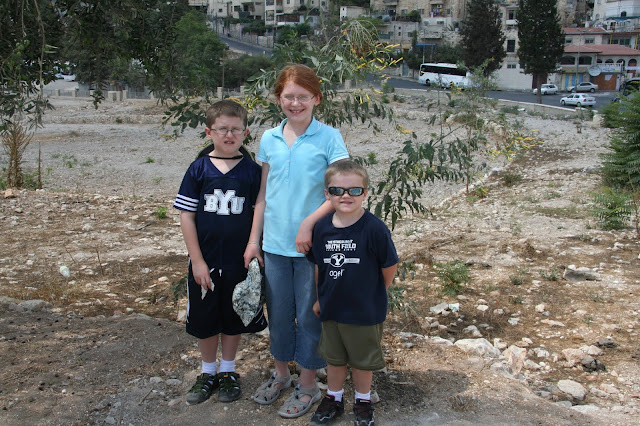 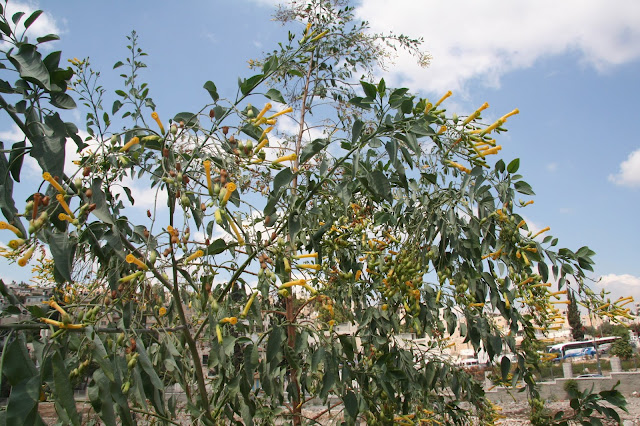 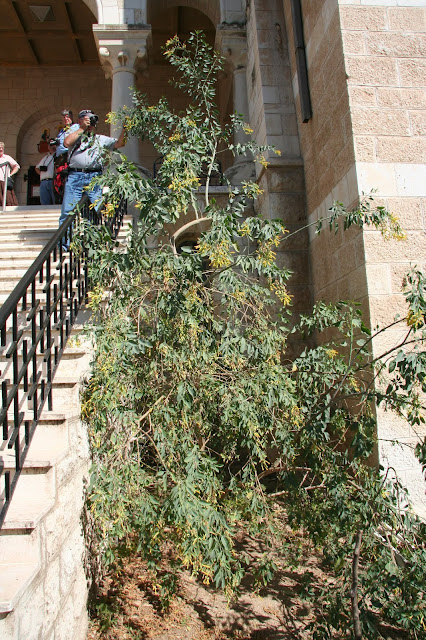 Mustard tree at the Trappist Abbey at Latrun. 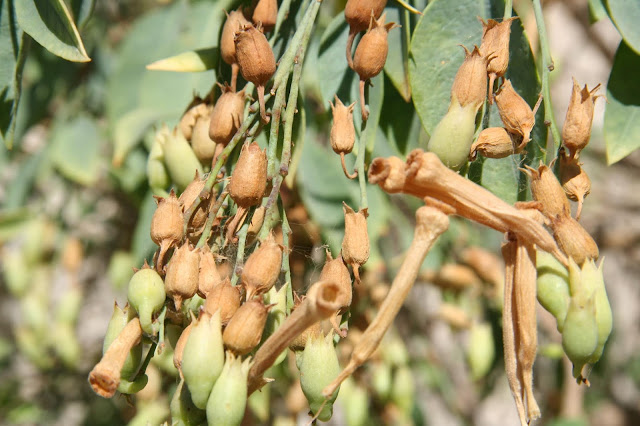 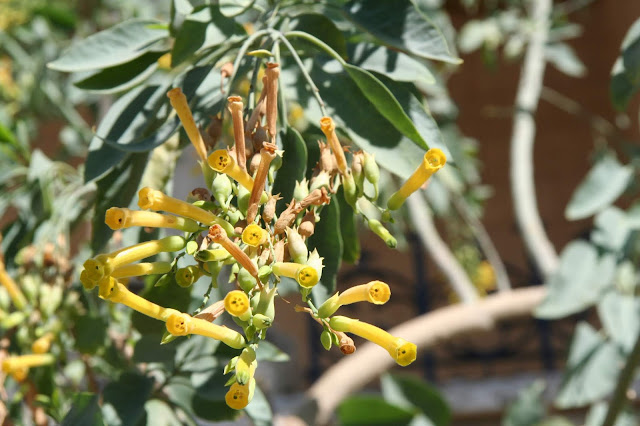 Luke 8:
1 And it came to pass afterward, that he went throughout every acity and village, preaching and shewing the glad btidings of the kingdom of God: cand the twelve were with him,
2 And certain women, which had been healed of evil spirits and infirmities, aMary called Magdalene, out of whom went seven devils, 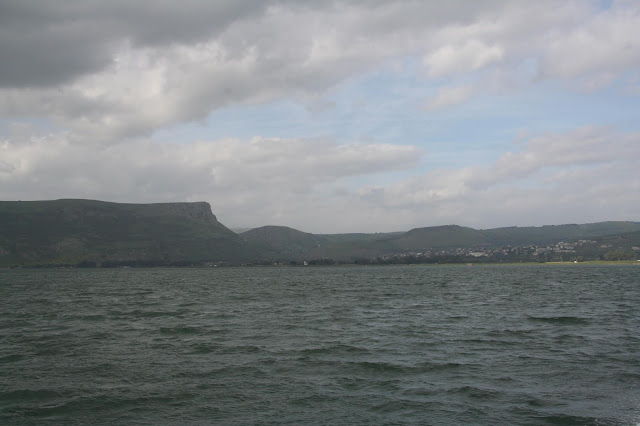 Magdala (from whence hails Mary Magdalene) sits on the plains to the north (right) of Mt. Arbel (cliff on the left). 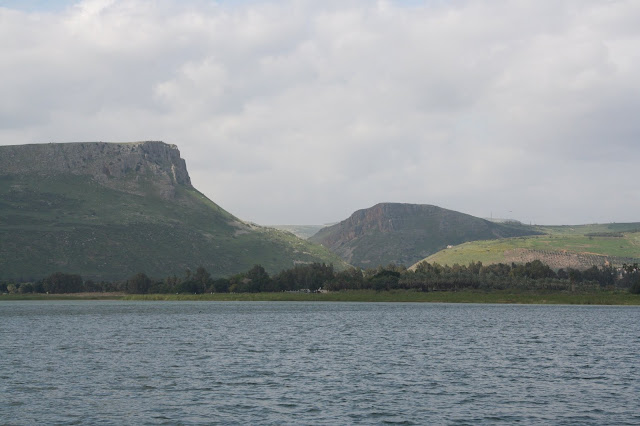 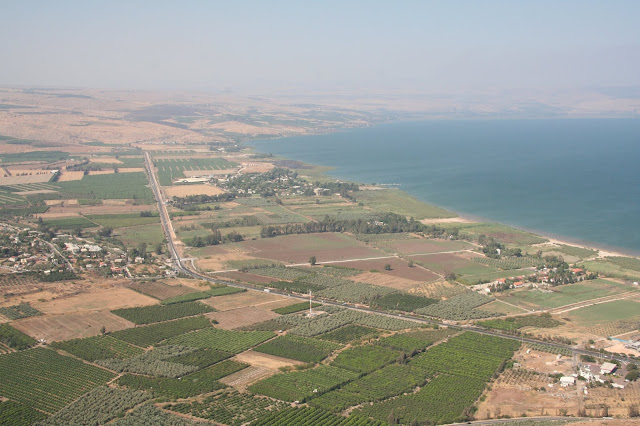 The plain of Magdala from Arbel. 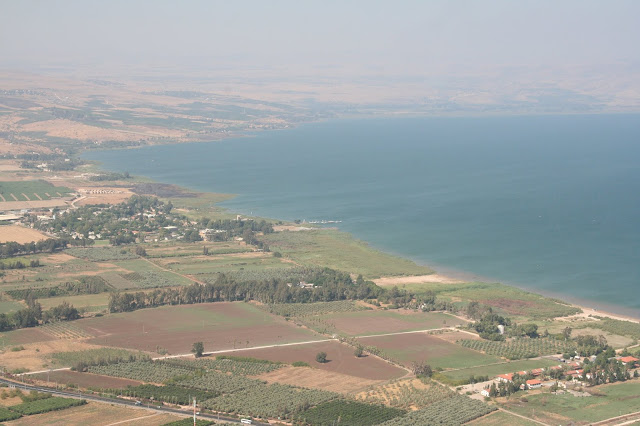 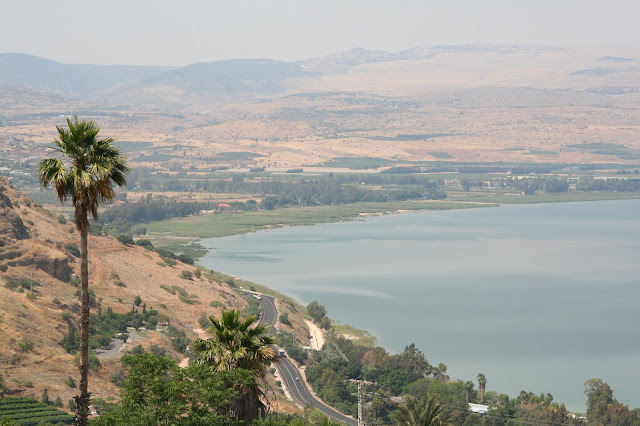 The view from the Galilee Branch house in Tiberius. Magdala sits just around the bend of the road and is hidden by the slope of Arbel.

In recent years excavations have uncovered amazing ruins from the time of Jesus and Mary Magdalene. I have yet to visit these excavations so check out the images and descriptions here:

Displayed at the Madala visitor center is this wonderful painting of the woman with the issue of blood touching the hem of Jesus' robe.

Luke 8:
43 ¶ And a woman having an issue of blood twelve years, which had spent all her living upon physicians, neither could be healed of any,
44 Came behind him, and touched the border of his garment: and immediately her issue of blood stanched. 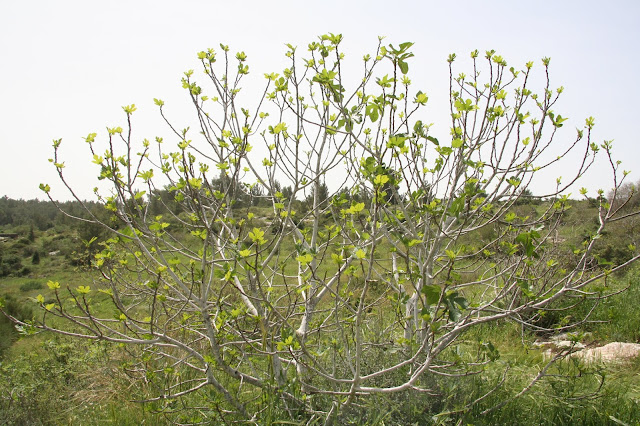 A fig tree just starting to leaf in mid-March.

Luke 13:
6 ¶ He spake also this parable; A certain man had a fig tree planted in his vineyard; and he came and sought fruit thereon, and found none.
7 Then said he unto the dresser of his vineyard, Behold, these three years I come seeking fruit on this fig tree, and find none: cut it down; why cumbereth it the ground? 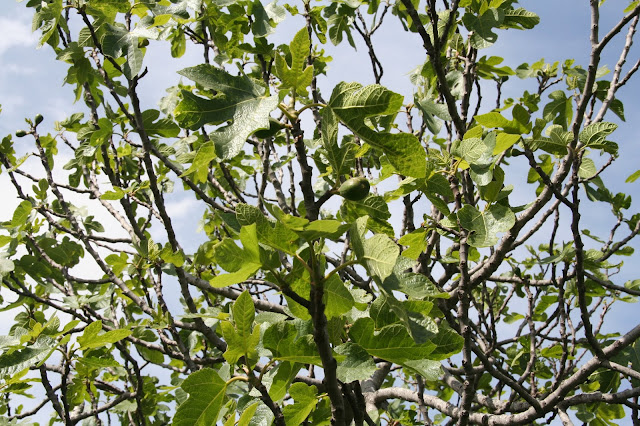