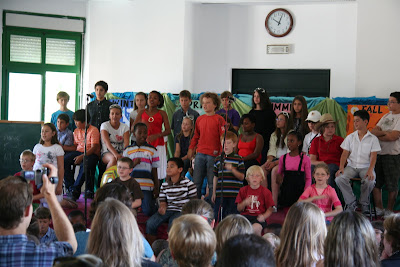 The school year at the Anglican International School of Jerusalem ended today. Yesterday the Elementary School had an end of year program. Joel's (brown shirt lower left) third grade class sang a song about volcanoes. One of the songs the entire student body sang was about being one. Given the diverse student body at AISJ it was very appropriate. 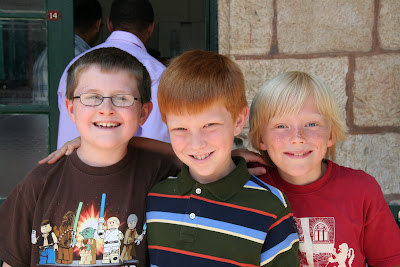 Joel and Sarah have made good friends from around the world. Red headed Daniel is a devout Southren Baptist and Emile is from Norway. 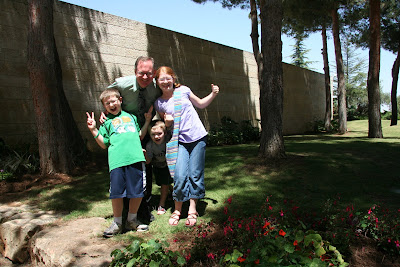 After their last white van ride home from school today we paused for a celebratory photo. 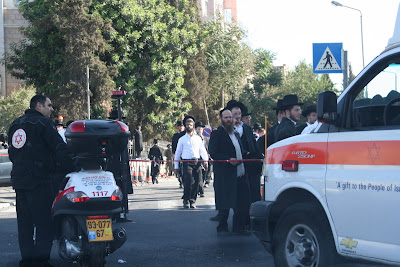 This evening we returned to AISJ for the secondary school award ceremony and graduation. AISJ is located in West Jerusalem on Prophets Street on the periphery of the Ultra Orthodox Jewish neighborhood of Mea Shearim. It is also located a few blocks west of the Russian Compound where Jerusalem's main jail is located. Today the parents of 70 girls from the West Bank settlement of Emmanuel were to report to jail for violating a supreme court decision forcing their daughters to return to attending the local school for both Orthodox and Ultra Orthodox (aka Haredim) Jewish girls. Apparently the Ultra Orthodox parents feel their daughters should not have to mix with the Orthodox girls--many of whom are Shepardic (from Middle East and Eastern lands) Jews. Since most Haredim are Ashkenazi (European) Jews, there is also a racial/ethnic component to this kerfuffle. The Ultra-Orthodox solution was to put up partitions in every class room to separate the two groups of girls. The supreme court said this was unacceptable for a public school and it had to stop. Rather than give in, the Ultra-Orthodox parents pulled their daughters out of school. The state responded with a two week jail sentence for the parents that was to begin today at 5:00 pm--the same time that the AISJ graduation was to begin. 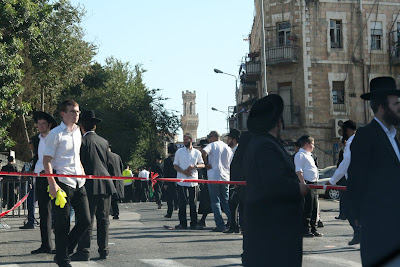 A protest was planned for earlier in the afternoon and it was hoped that everything would clear out before 5:00. Graduation was postponed until 5:30. As I drove Sarah and Tanner to the program, we found that every road leading to the school was still barricaded by police because of the estimated 100,000 ultra-orthodox Jews in and around the Russian Compound and Mea Shearim (and also in the town of Bnai Brak) who were still protesting the jailing. I took these two pictures from the drivers seat (while stopped in traffic). This is the usual road to the school. I kept driving and driving only to find every street leading to where I wanted to go blocked by police. Finally I was able to get to the school via the bus lane on Prince George street and then via the wrong way on a tiny one way alley that led up to Prophets street from Jaffa street. These minor infractions of the law prompted Sarah to quote the 12th article of faith to me: "we believe......in obeying ,honoring and sustaining the law." 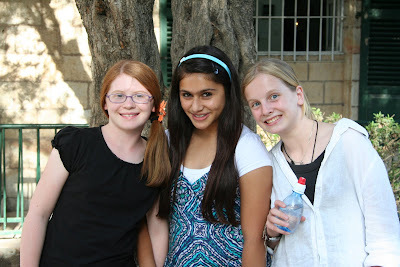 It was a relief to enter the garden oasis of the AISJ. There Sarah met two good friends, Darshana from Nepal and Rachel from Sweden--they are three of the four girls in the sixth grade. 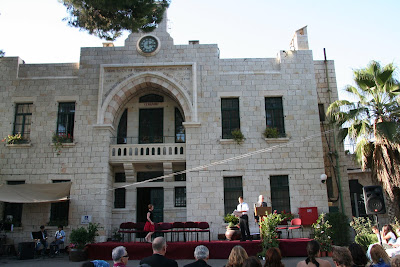 Sarah--the youngest of the sixth graders and thus the youngest in the secondary school was awarded a Merit Certificate for earning an end of year GPA over 3.5. She is walking across the stage to get her award. 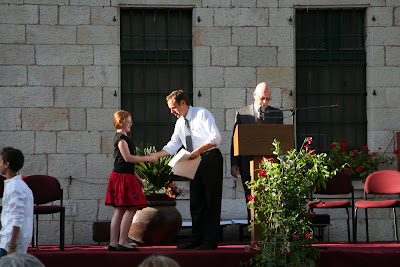 Here she is accepting the award. The school building was erected in 1896 as a Mission Hospital for Jews by the London Society for Promoting Christianity Among the Jews (as inscribed on the top of the building in the photo). The awards ceremony then turned into a graduation ceremony. Of the 14 graduating class members, two were Israeli Jews and headed into the IDF (Israeli Defense Forces), three were Palestinian Arabs and the rest were from Africa, Asia, Europe and North America. It was a day of contrasts, while one group of people was demonstrating to have segregated education based on levels of religiosity and ethnic background, the other was celebrating an educational system that embraces and celebrates diversity of religiosity, religion, race and nationality.
Posted by chad at 12:50 PM