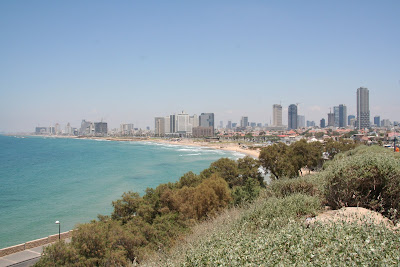 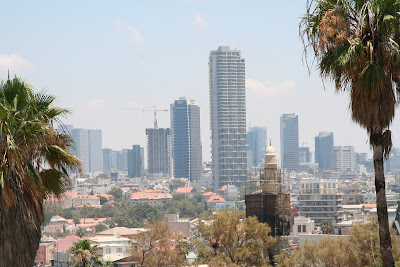 Last Sunday (June 14th) three of the faculty went on a day field trip to Jordan with a member of the Tel Aviv LDS branch who works in the US Embassy and who has worked in Jordan. This day trip necessitate another day trip to the Embassy of Jordan in Tel Aviv to get a visa. Tel Aviv is a big modern city like many others that surround the Mediterranean Sea. Some day we plan to go as a family to its wonderful beaches. These photos of Tel Aviv are from the city of Jaffa. It was an Arab town up until 1948. Since then Jaffa has been incorporated into the city of Tel Aviv. 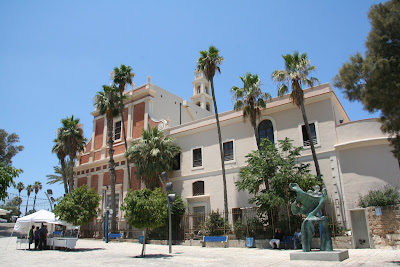 The Church of St Peter commemorates the event in the Book of Acts Chapter 10 where Peter receives a vision of unclean foods descending from heaven which teaches him that the gospel is to now go to the gentiles and not just the Jews. From Jaffa (Joppa), Peter then goes as commanded to Caesarea to teach Cornelius the Roman. 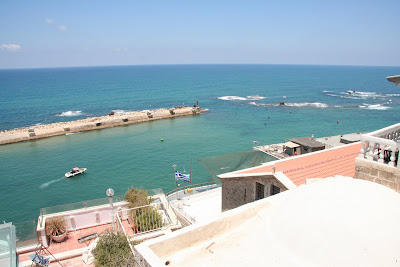 From the port of Jaffa, Jonah sets out to not go to Nineveh 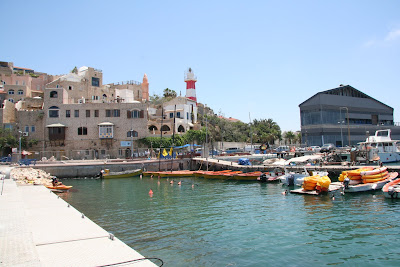 From the port looking up at old Jaffa. 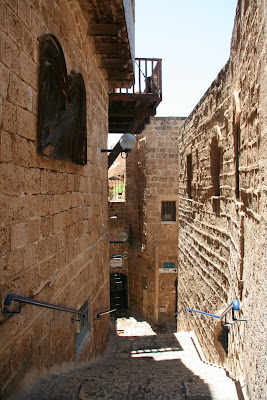 The old city of Jaffa is no longer Arab. Many of the homes are now shops for Israeli artists. 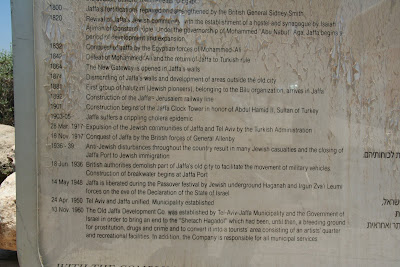 A sign near the main plaza in front of St. Peter's Church displays an interesting timeline. I would call it revisionist history. As I scanned down through the centuries of Arab habitation in this city I soon realized that there was no mention of Arabs and no mention of the Arab exodus in 1948--only the "liberation" of the city by the Jewish underground. 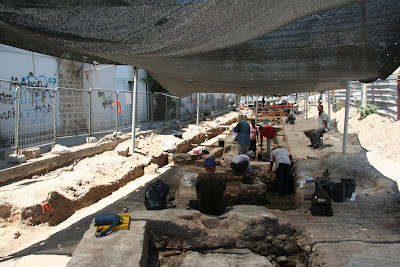 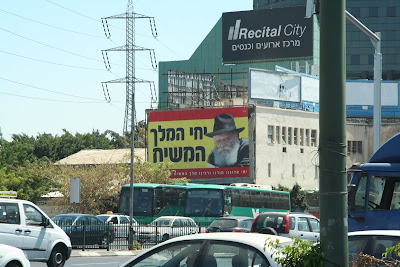 Driving back to the Jordanian Embassy to pick up our visas, I noticed a bill board of the late Menachem Schneerson. He was a Lubavitcher Rabbi from NYC. The Hebrew writing states: "I am the King, the Messiah." I'm not sure if he ever claimed to be the Messiah, but since his death his followers have certainly made that claim and promoted it by plastering his image all over the country. (On a side note: All foreign countries have their embassies in Tel Aviv even though Israel claims Jerusalem to be its capital. This is standard international policy until the disputed status of Jerusalem is resolved. Locating an embassy in Jerusalem would indicate an acceptance of Israel's conquest and annexation of Arab East Jerusalem). 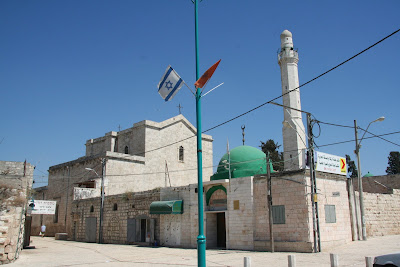 Next stop was the town of Lod--next to Ben Gurion airport. This is another former Arab town. In 1948 its Arab inhabitants were forcibly expelled and trucked to Jordan's West Bank. Our destination was the Crusader Church of St. George--who slayed the dragon. The Crusader church was once much longer, but its western end was destroyed to make way for a mosque. This is a fascinating and encouraging example of Christian and Muslim Arabs worshiping side by side. 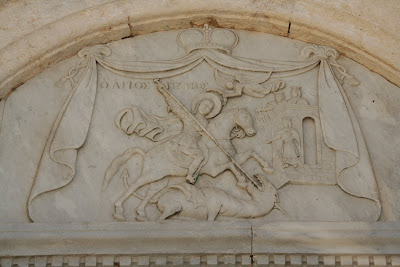 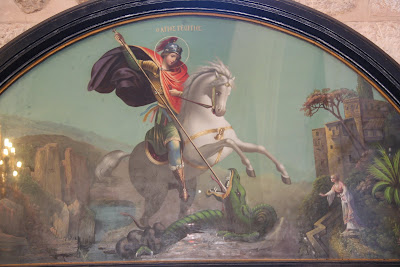 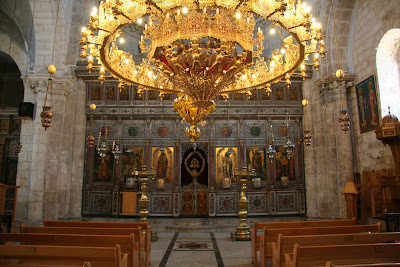 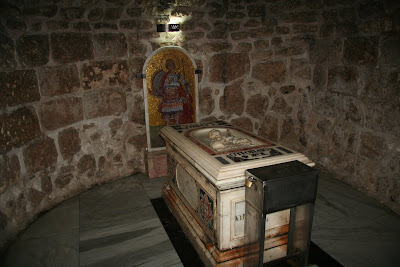 In the crypt is the tomb of St. George. 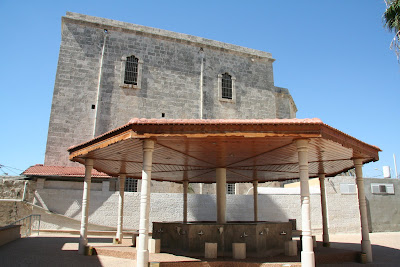 The church and the mosque's place for ritual washings. 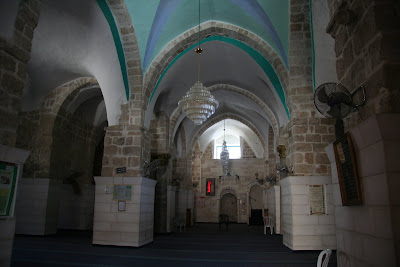 Facing the mihrab which points southward towards Mecca 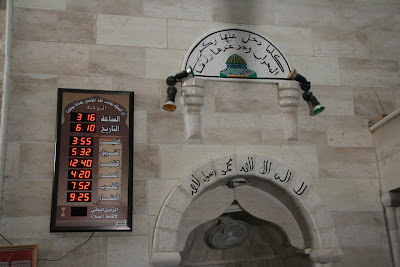 The times for prayer (It is still uncertain to me why there are six times for the five daily required times for prayer--I think one is optional). The dawn prayer begins at 3:55 am! Winter prayer times are a bit more manageable. Most nights we all sleep through the dawn call to prayer, but not always. For an account of my experiences with the call to prayer go to: http://magazine.byu.edu/?act=view&a=1288 and scroll down to my "Call to prayer" article 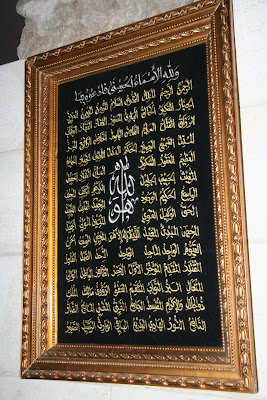 The 99 names of Allah 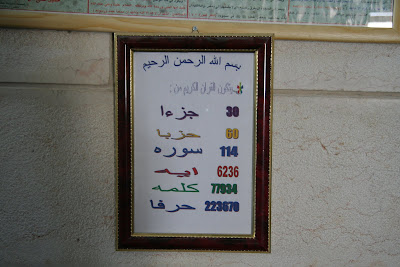 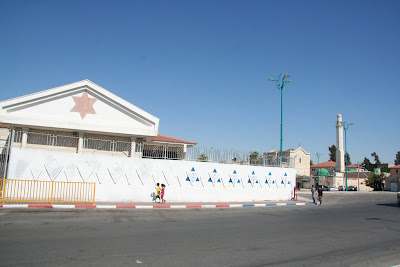 Across the parking lot was a Jewish synagogue. Synagogue, church and mosque--peacefully together (at least so it seems). Would that it were that easy between Jews, Christians and Muslims. 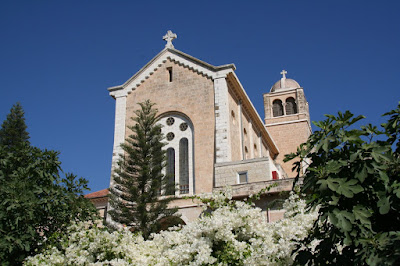 The Trappist Monastery of Latrun is one of three possible sites of the town of Emmaus. The monastery is known for its wine production. 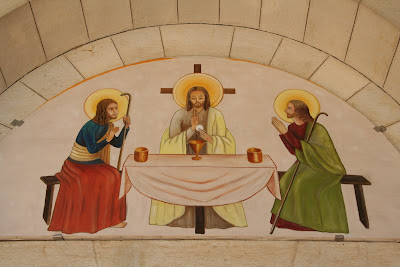 The account is found in the last chapter of Luke. After his resurrection, Jesus walks on the road to Emmaus with two men and teaches them. They invite him to abide with them. After he leaves they realize that while he taught them their hearts burned. A favorite story and a favorite hymn (Abide with me 'tis eventide). 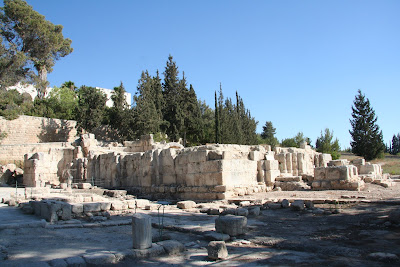 Down the road a few kilometers is a second site of Emmaus, with the ruins of a Byzantine church to mark the spot. The third possible Emmaus is the West Bank Arab town of Imwas--don't think will get permission to visit that site.
Posted by chad at 12:41 PM