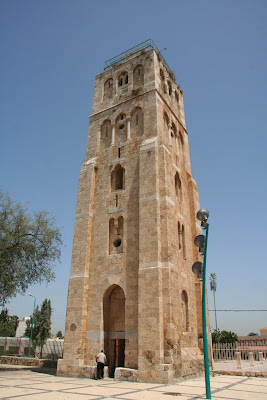 On Monday June 21st we visited Ramla on the coastal plain. It is the only town in the region founded by Arabs. It served for several centuries as a provincial capital of Arab ruled Palestine. This tower is one of the few remains of the White Mosque. Hiking up we found some pigeon eggs (the first time I have ever seen some) on one of the inner ledges. 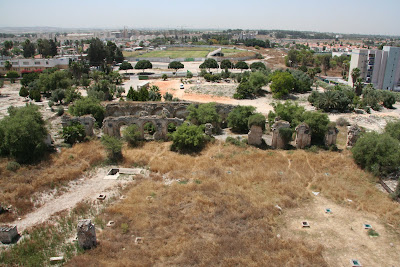 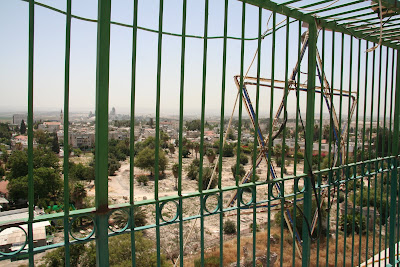 In 1948 most of the Arabs of Ramla and neighboring Lod were trucked (ethnically cleansed) east into Jordan's West Bank. Today Ramla is a mostly Jewish town as evidenced by the Star of David on the top of the minaret. To the east is the city center. 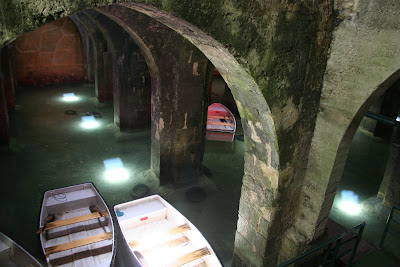 Our second stop was a delightful discovery--the Cistern of St. Helena which was constructed during the reign of Abbasid ruler Harun al-Rashid in 789. Ramla has no natural sources of water (springs or streams--living waters as they are called in the Bible) and so it had to store large amounts of winter rain water in cisterns to survive the hot dry summers. This is one of the largest cisterns. 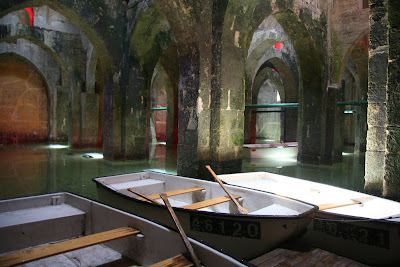 Most ancient cisterns are old and cracked and unable to hold water, but this one has been restored, filled and outfitted with row boats. 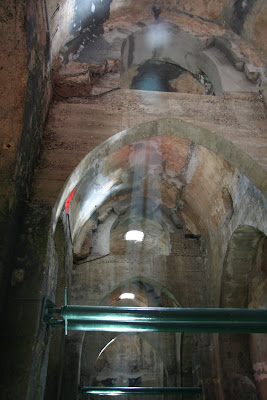 The cistern has 24 holes where city folks could drop their buckets to bring up water. 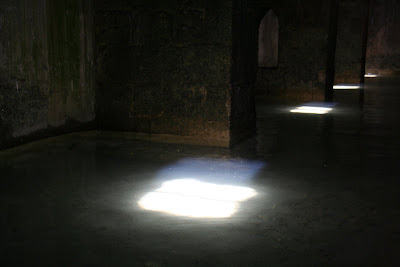 The water was amazing clear and clean. 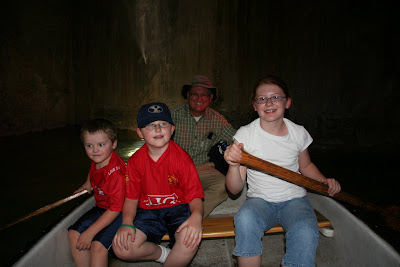 We had a great time rowing around. Everyone learned how to row. It was good there were no other boaters, we were not very good at steering. 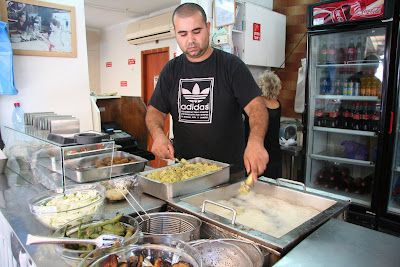 For lunch we had very good felafels. Here the mashed chick peas balls are being fried. 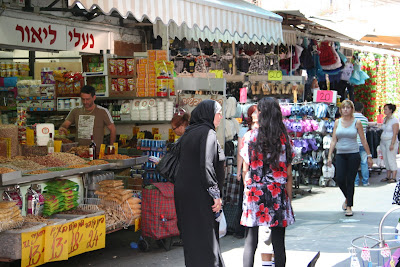 Israeli Jews and Israeli Arabs (20% of the population of Israel) were both shopping in the old market of Ramla. 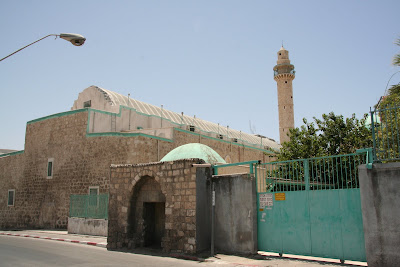 Our final stop in Ramla was the Grand Mosque. It was once a large Crusader Church. 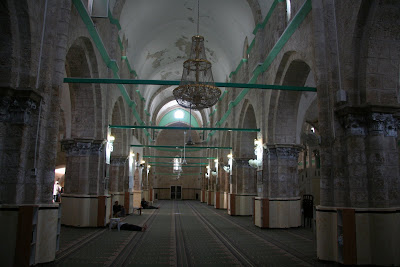 The elongated eastward oriented church became a southward oriented mosque. In the distance you can see the apse of the church. The mihrab pointing towards Mecca and mimbar (pulpit) are on the right. You can barely see the pulpit behind the second pillar. This in an interesting example of spatial succession of sacred space. 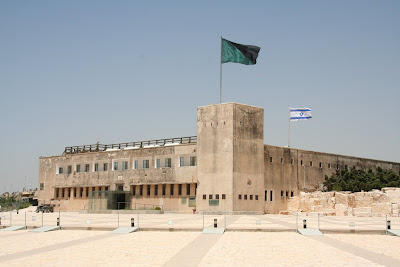 Next stop was Latrun. This area is strategically important as it guards the entrance to the road that climbs the hills up to Jerusalem. This building was a police station during the British Mandate. It is now a tank memorial and museum. 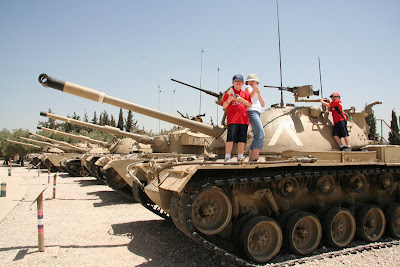 There were scores of tanks to climb on including Sherman tanks from the US that Israel used and captured Russian tanks from Egypt. 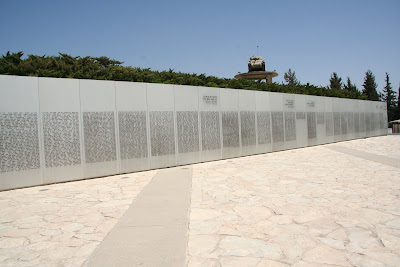 A memorial with names of all of the members of the Israeli armored corps who have died in the many wars. 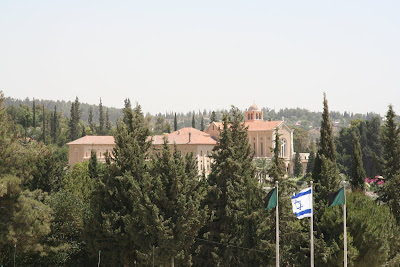 From the top of the police station there is a good view south to the Latrun Trappist monastery (mentioned in a previous post as one of the possible sties of Emmaus). 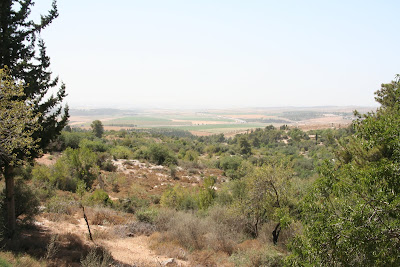 To the east of Latrun and also overlooking the Tel Aviv-Jerusalem road is Ayalon (Canada) Park. Once upon a time three Arab villages inhabited these hills. Their strategic height were ideal for pre-1948 Arab attacks on Jewish convoys leading up to Jerusalem and for 1948-67 shelling from these Jordanian villages down onto Israel. When Israel occupied the West Bank, the three villages were vacated and then demolished. A park rose in their stead. Arab planted fruit trees are all that remain of the previous occupants. 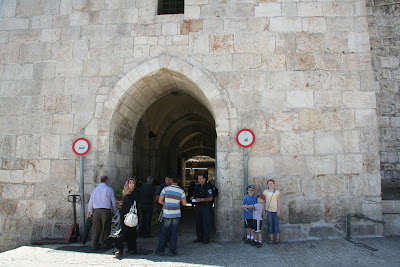 For a morning excursion on Thursday the 24th we walked down and back to the Old City. This is Herod's (Flower) Gate that leads into the Muslim Quarter. Since it leads into a residential area and since this area has been prone to violence and protests in the past, this is the one gate of Jerusalem that the students are not allowed to use for entering and exiting the Old City. Yesterday this gate are ceremonially reopened by local politicians and religious leaders following a major face lift and refurbishing of the gate and surrounding walls. 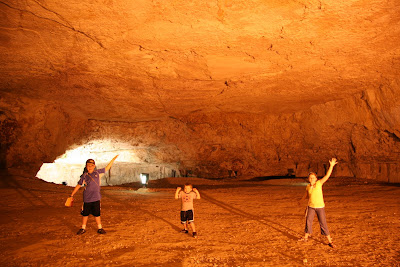 Zedekiah's cave underneath the north central area of the Old City near Damascus Gate. This cave is the traditional place where King Zedekiah came to escape (he should have listened to the prophet Jeremiah) from Jerusalem during the Babylonian conquest. He followed the cave down toward Jericho where he was caught and forced to watch the killing of his sons before having his eyes put out. It is also the source of the limestone blocks use to build Herod's temple and possibly Solomon's Temple. Because of its connection with temple masons, this large part of the cavern has been used for an annual gathering by Masons. 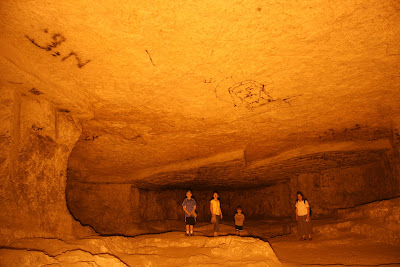 Notice the ceiling where you can see the straight lines where blocks were quarried. 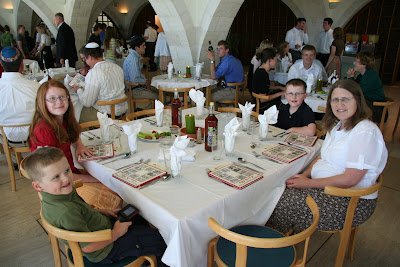 Each semester the students participate in a mock Passover Seder. It takes 3 1/2 hour for all of the readings, songs, matza breaking, dining etc. The local Israeli Professor who teaches the Judaism/Israel studies class leads the seder.
Posted by chad at 11:34 AM