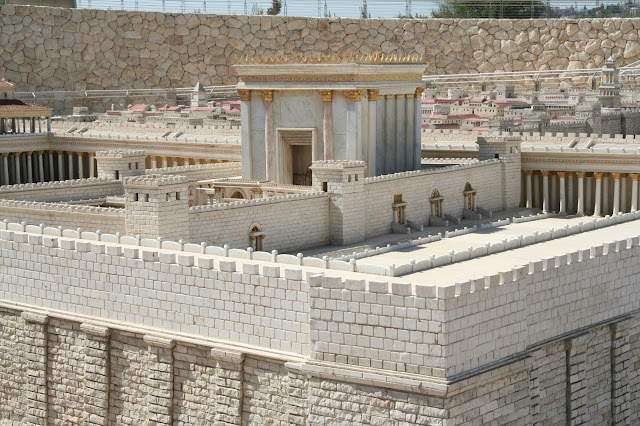 Many of the teachings of Jesus from his second day in the temple were condemning of those who were so strongly opposed to him. 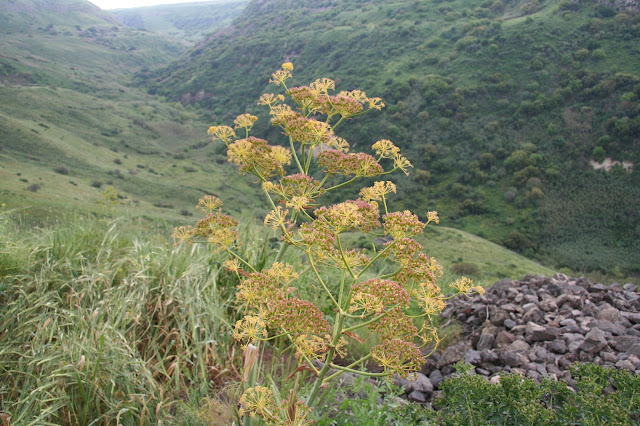 An anise plant with both blossoms and developing seeds at Gamla on the Golan Heights. The seeds have a licorice flavor and make a delicious herbal tea.

Matthew 23
23 Woe unto you, scribes and Pharisees, ahypocrites! for ye pay btithe of mint and canise and cummin, and have domitted the weightier matters of the law, ejudgment, fmercy, and faith: these ought ye to have done, and not to leave the other undone 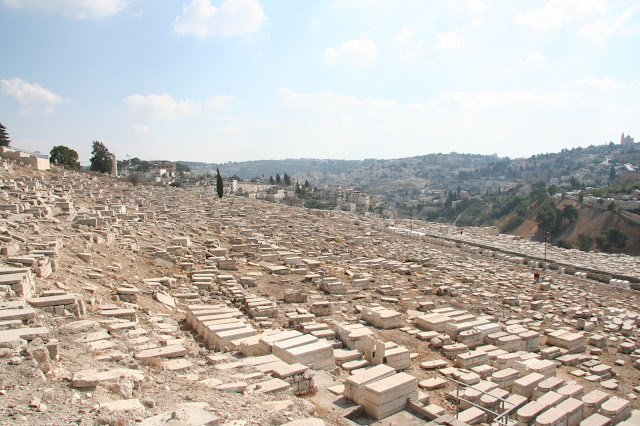 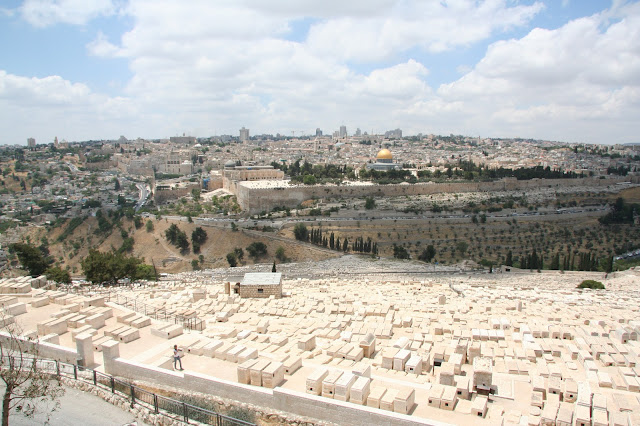 Modern day sepulchers covering the southwestern slope of the Mount of Olives.

27 Woe unto you, scribes and Pharisees, hypocrites! for ye are like unto awhited bsepulchres, which indeed appear cbeautiful outward, but are within full of dead men’s bones, and of all duncleanness.
28 Even so ye also outwardly appear arighteous unto men, but within ye are full of bhypocrisy and iniquity 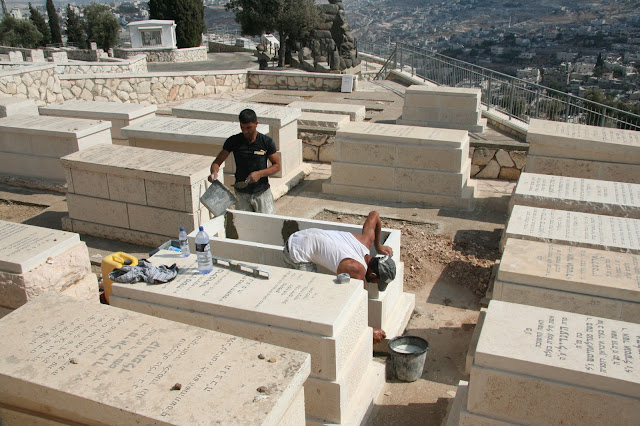 Preparing an empty sepulcher for burial. 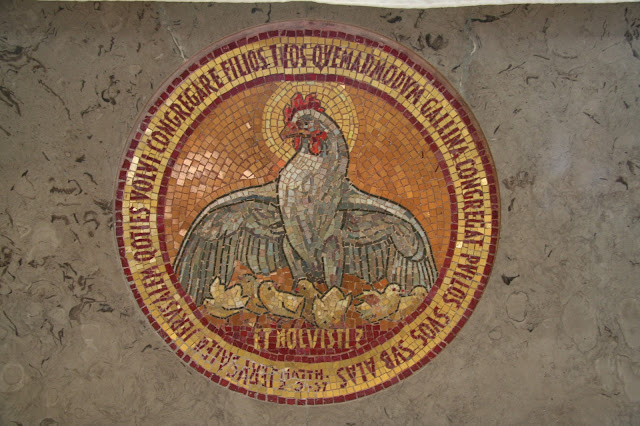 Matthew 23
37 O aJerusalem, Jerusalem, thou that bkillest the prophets, and stonest them which are sent unto thee, how often cwould I have dgathered thy children together, even as a hen gathereth her chickens under her wings, and ye ewould not! 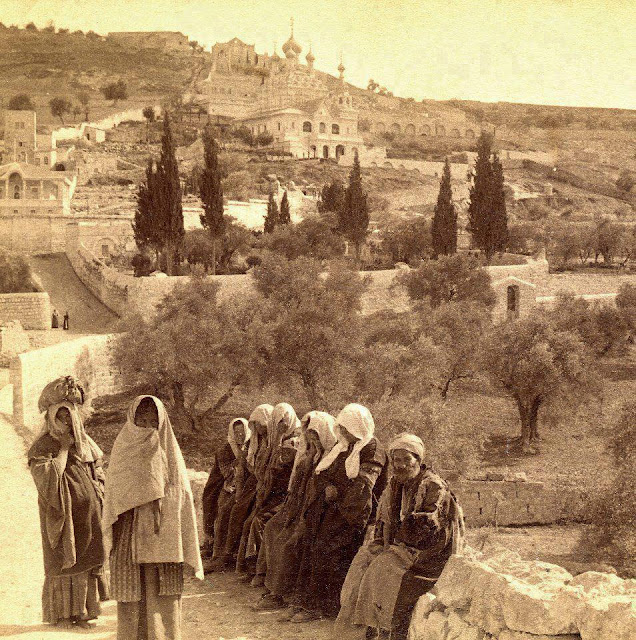 From the temple Jesus then went out and "sat upon the mount of Olives" where his disciples asked him what would be the signs of his coming. 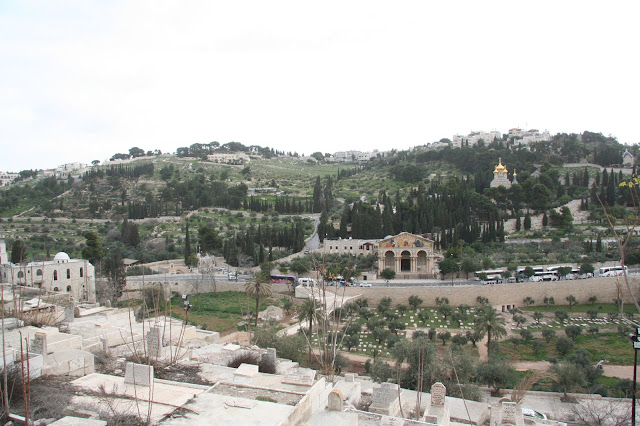 The Mount of Olives from just below the eastern wall of the Temple Mount with the Basilica of the Agony (aka Church of Gethsemane) straddled by groves of olive trees (center right) and the onion domed Russian Church of Mary Madelene (upper right) and the rock wall enclosed Orson Hyde garden on the upper left side slope of the mount. 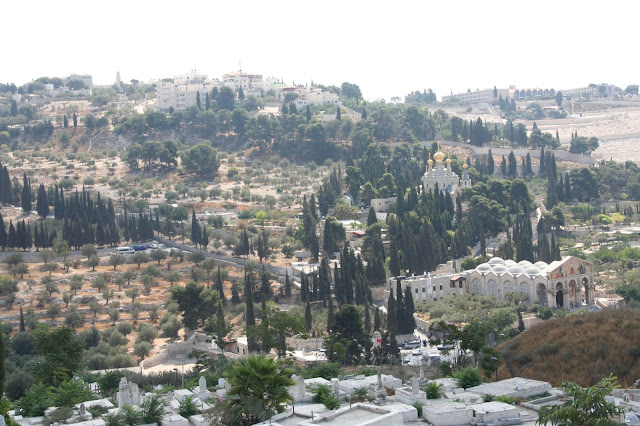 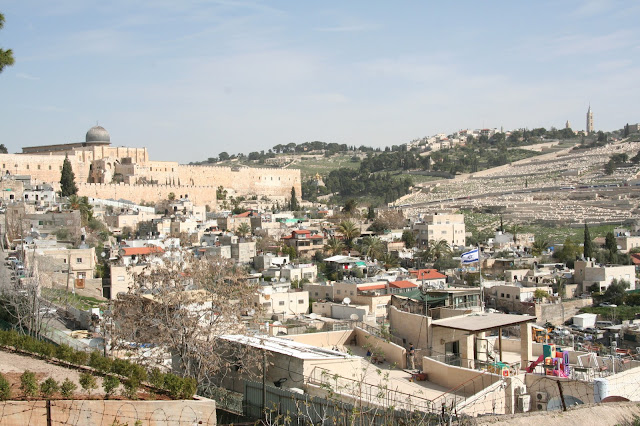 The Mount of Olives from the southwest 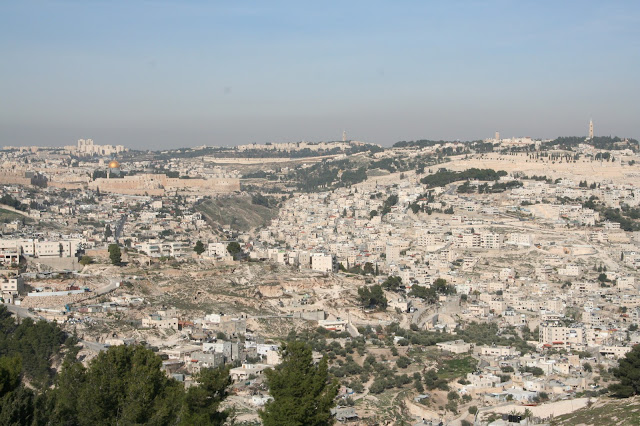 The three steeples/towers of the Mount of Olives from the south/right: the Russian Steeple of the Ascension, the Lutheran Augusta Victoria Church of the Ascension, Hebrew University (technically on Mt. Scopus). The BYU Jerusalem Center sits just below the crest of trees mid point between Augusta Victoria and Hebrew University. Notice the Temple Mount and the Kidron Valley between it and the Mount of Olives. 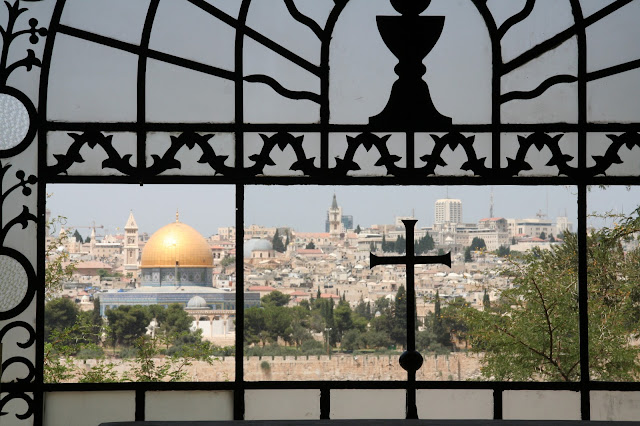 Looking across the Kidron valley through the windows of the Dominus Flevit Church to the Temple Mount. The temple would have been visible from any point on the western side of the hill. 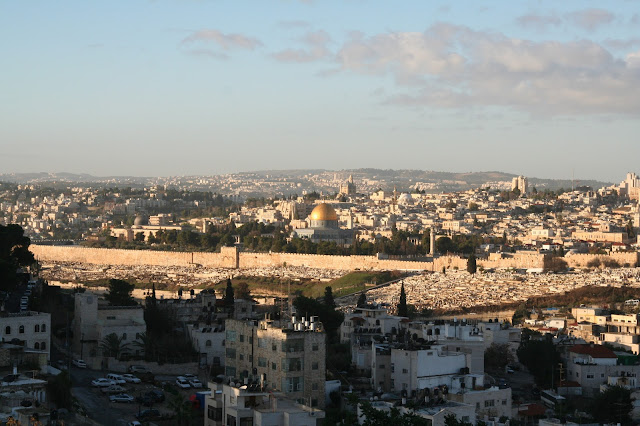 The view southwestward towards the Temple Mount from the BYU Jerusalem Center on the northern end of the Mount of Olives. 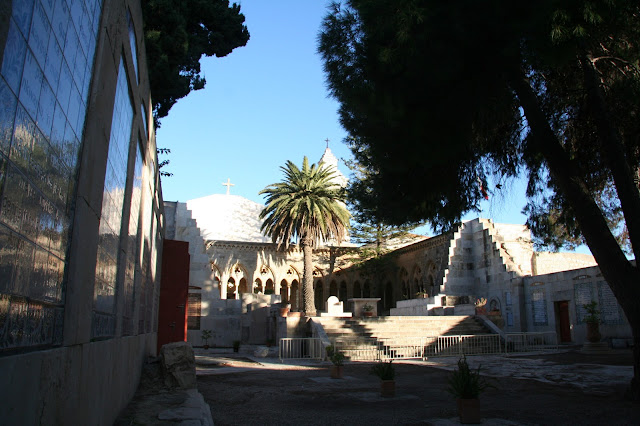 The interior court of the Pater Noster (Lord's Prayer) Church on the southern crest of the mount. Beneath the palm tree are ancient grottoes where tradition has it Jesus may have sought refuge and from where he may have given his Olivet Sermon--which prophesied of signs for the soon to come destruction of Jerusalem and the second coming of Jesus. 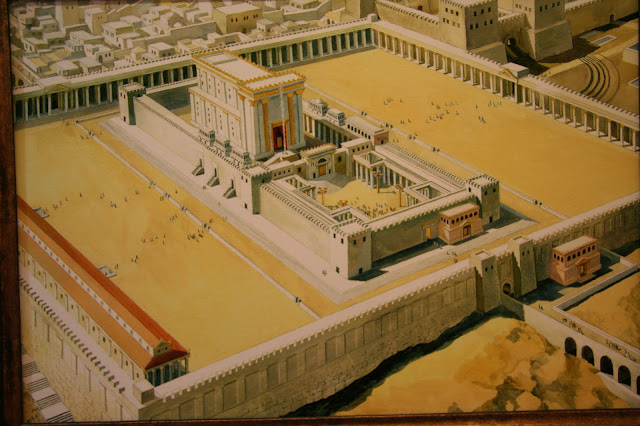 Painting of the temple at the time of Jesus from the Temple Institute in the Jewish Quarter which teaches about Jewish temple worship and about preparations being made to build the Third temple.

1 And Jesus went out, and departed from the temple: and his disciples came to him for to ashew him the buildings of the btemple.
2 And Jesus said unto them, aSee ye not all these things? verily I say unto you, There shall not be left here one bstone upon another, that shall not be thrown down. 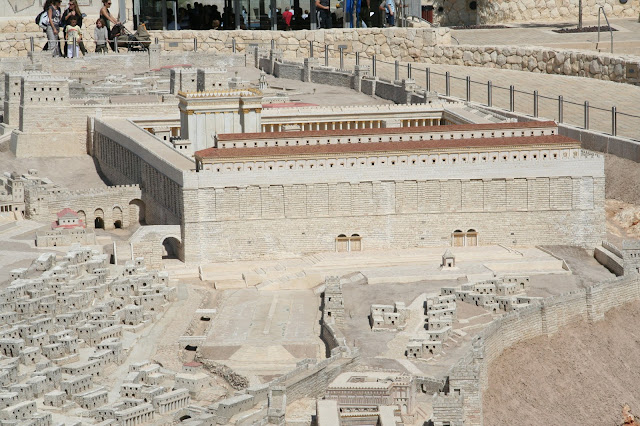 View of the southern wall of the temple complex. 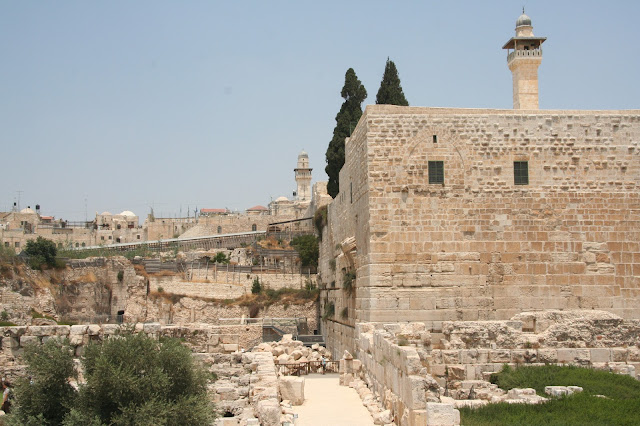 The southwest corner today. Note the pile of stones in the lower center of the photo. 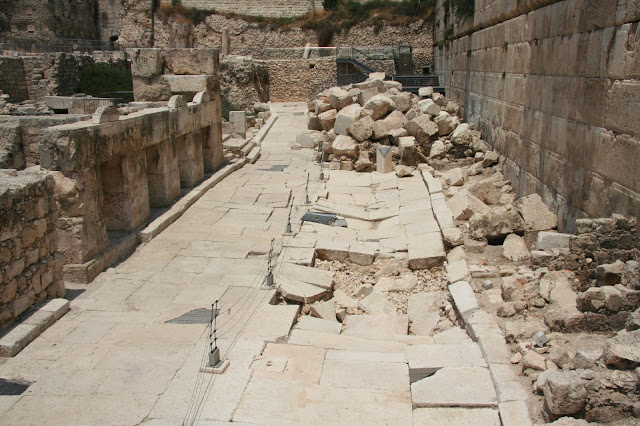 The Roman cardo (street) ran  parallel to the southern most western wall (right). Shops that were under the base of the arch way that lead up over the street to the temple mount are on the left. The pile of rocks are rocks from the Temple that were thrown down from the temple platform by Roman soldiers during the 70 AD destruction of Jerusalem. The indentation in the street is where other stones fell. These piles of stones are a vivid reminder that the Romans dismantled the entire temple, leaving no stone on top of another. 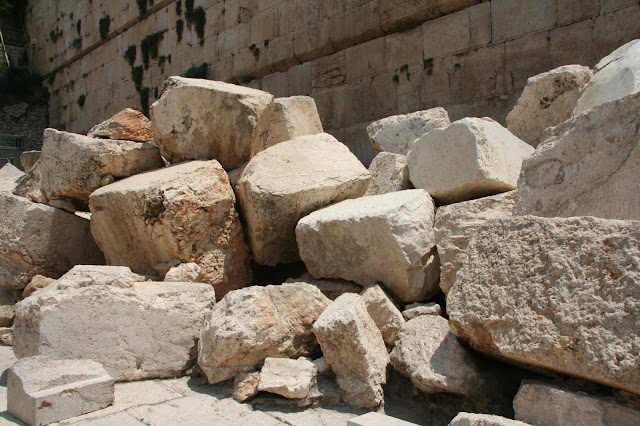 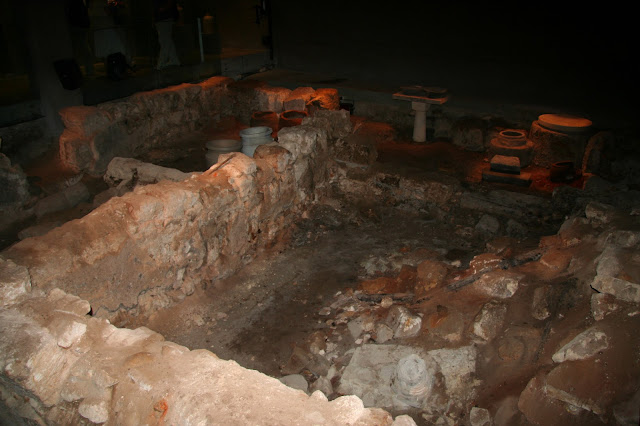 Further up the western slope, where many of the temple controlling Sadducee families lived, other remains also testify of the destruction of Jerusalem. One of these archeological sites is called "the Burnt House" because of the charred timbers (note the black diagonal line running downward from the right center of the photo) that date back to 70 AD. 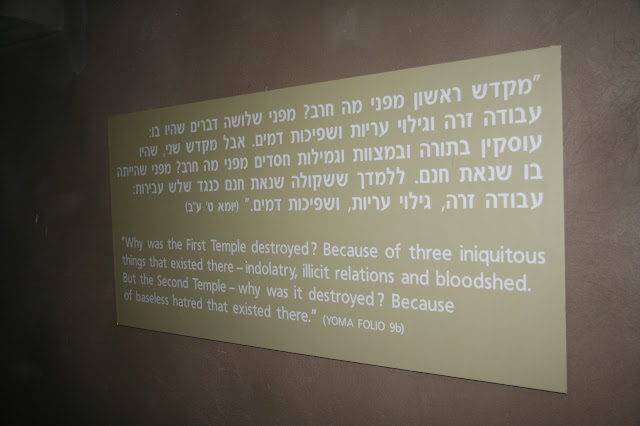 Explanatory materials in the Burnt House include several statements from Jewish texts that explain why the temples were destroyed.

Signs of the second coming of Jesus. 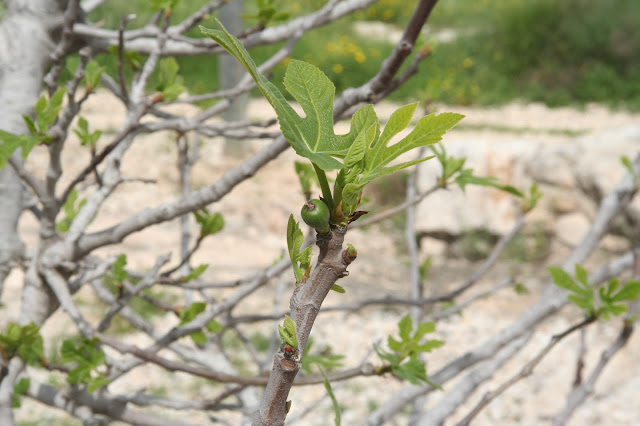 Matthew 24
32 Now learn a parable of the afig tree; When his branch is yet tender, and putteth forth leaves, ye know that summer is nigh:

33 So likewise ye, when ye shall see all these things, know that ait is near, even at the bdoors. 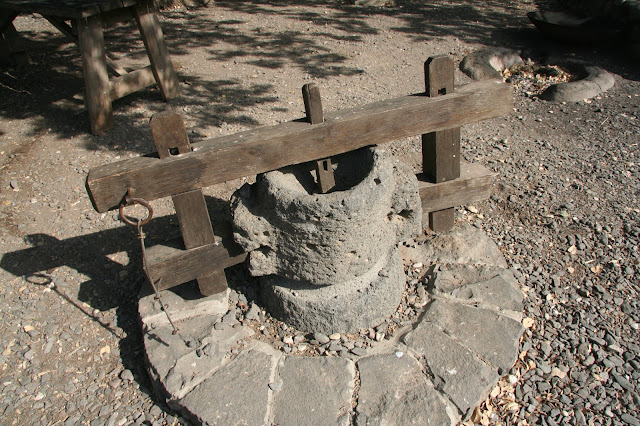 A two person grain grinding mill made of basalt at Qatzrin on the Golan Heights.

41 Two women shall be grinding at the mill; the one shall be taken, and the other left.
42 ¶aWatch therefore: for ye know not what hour your Lord doth come. 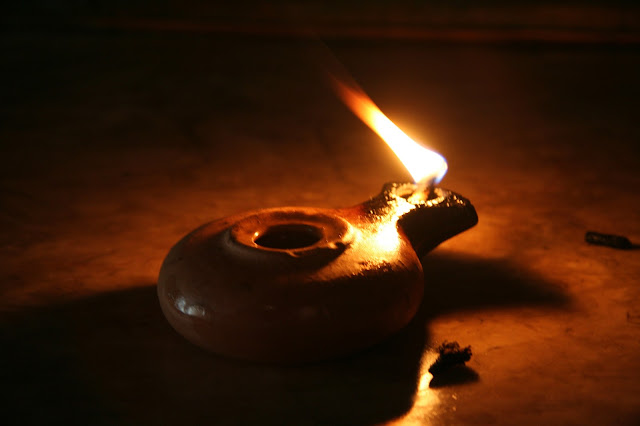 Matthew 25
1 aThen shall the kingdom of heaven be likened unto ten bvirgins, which took their clamps, and went forth to meet the bridegroom. 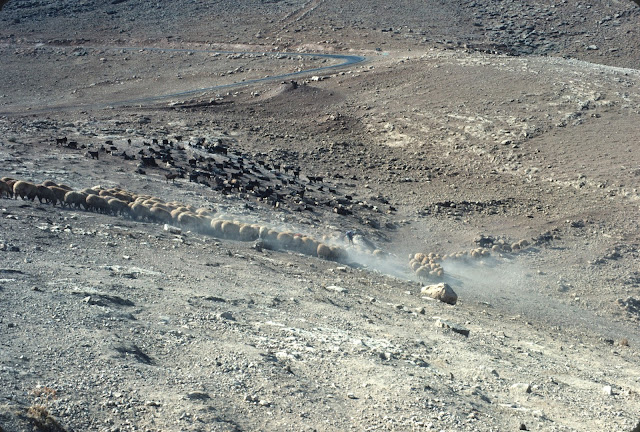 Separated sheep and goats in the Judean Wilderness. 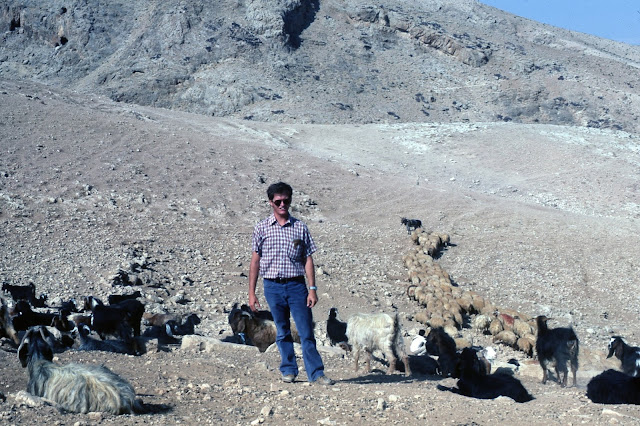 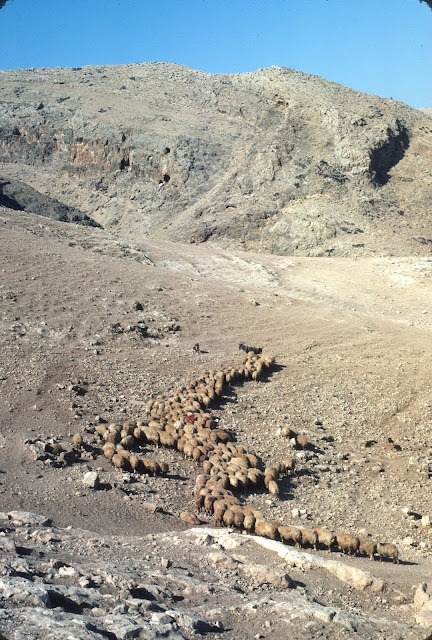 Off go the sheep.


31 ¶ When the Son of man shall come in his glory, and all the holy angels with him, then shall he sit upon the throne of his glory:
32 And before him shall be gathered all nations: and he shall separate them one from another, as a shepherd divideth his sheep from the goats:
33 And he shall set the sheep on his right hand, but the goats on the left.