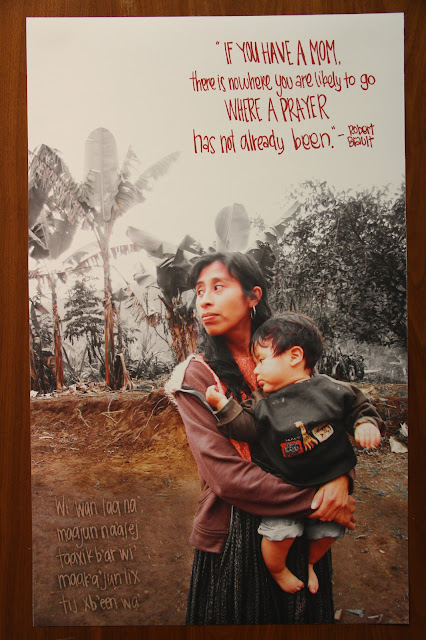 Last night we dropped by the Harris Fine arts Center at BYU to see the senior art exhibit of Emily Hurst Pritchett (wife of Marie's nephew Luke). In a neighboring exhibit of student made posters (for the VAGD 210 class), the above poster (by Emily Jacobsen) caught my eye. It states: "If you have a mom, there is nowhere you are likely to go where a prayer has not already been" (by Robert Brault). 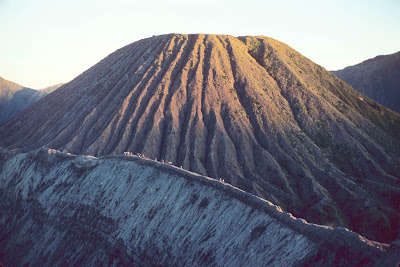 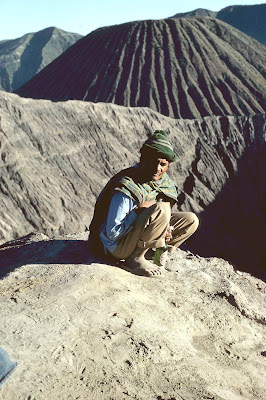 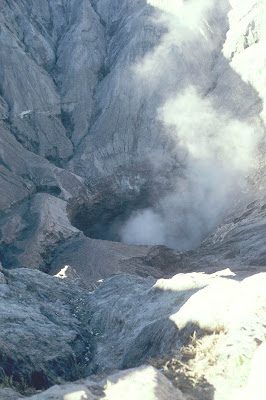 I think my first realization of the truthfulness of this statement was  on July 4, 1977 while atop the rim of the crater of Mr. Bromo in eastern Java. We missionaries had just been offered a guided tour down into the steamy crater by a local man (pictured above). I'm not sure why the other missionaries turned down the offer, but for me it was obvious. I knew that my mother was praying for the safety for her missionary son in a far off land and that those prayers were only good for so much protection. If I was stupid enough to venture down into the crater (which erupted a few years ago) then my stupidity might negate my mother's faith.

Knowing that our mother prays for the safety, health and well being of her large family is very comforting. At some point years ago we all started to note and even joke about who we thought was at the top of mom's prayer list. We knew she prayed for us all, but there were always those few who deserved extra prayer attention. For as long as I was still single, I was always at or near the top. At other times, the top of the prayer list was for a brother going through a divorce, other brothers in need of a job, a sister who lost an infant child, or me with my various cancers. 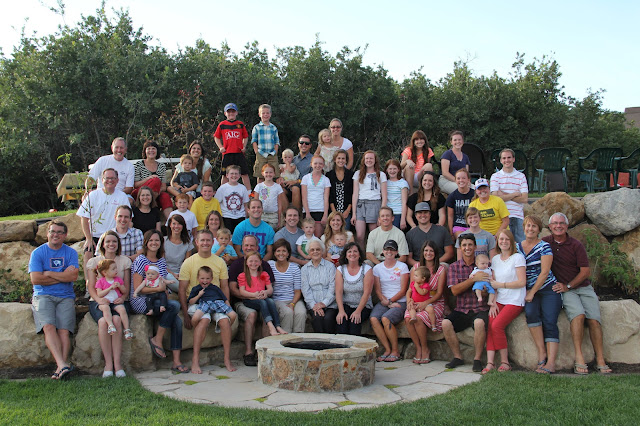 For the past six weeks, mom has been at the top of the prayer list of everyone in the Emmett clan in hopes that the replacement and repair of two heart valves would go smoothly and that her recovery would lead to a better quality of life.

Now that she is at home and slowly regaining her strength, mom is once again keeping watch over her flock. For the past week, our daughter Sarah has been on the top of her grandmother's prayer list (and the list of her worried parents and Tueller grandparents). Several visits to the pediatrician over the past year, last July for pneumonia and then in January for the flu (and possible strep), indicated a higher than normal blood pressure. At the first visit the doctor assumed the high blood pressure was just part of the pneumonia. When it was still high the second time the doctor recommended that we get it checked out. When Sarah visited Dr. Adams two weeks ago, her blood pressure was 155/110--way too high for a 14 year old who eats right, is not over weight, runs regularly and has no other symptoms of ill health. He referred us to a pediatric nephrologist at the University of Utah kidney and liver clinic. Armed with blood and urine tests and a renal ultrasound, Dr. Meridith Seamon, who looks to be not much older than Sarah, ruled out the normal cause of high blood pressure like kidney or thyroid problems, hormone levels, or being over-weight. So instead of treating the cause we are currently treating the symptoms with two prescription medications that will help to bring down her blood pressure. Sarah now takes her blood pressure twice a day and after nearly one week on the medication it looks as if it has finally dropped to a safer rate--tonight it was 138/90. This weekend she will wear a blood pressure monitor for 24 hours to see if we can find out what is causing this abnormality.

Now contending with Sarah at the top of the prayer list is my older brother Bob who recently was diagnosed with melanoma on his shoulder. When his doctor found out that his father had melanoma on his neck which spread to his brain and led to his death, that his son had melanoma removed from his leg and that his brother (me) had insitu melanoma removed from his cheek, she identified Bob's cancer as familial melanoma meaning that two-three other family member have the same cancer and that it is probably more a cause of genetics than forgetting to apply Sea & Ski at Beaver Mountain or Lake Powell.

She thus recommended that instead of just the normal simple cutting out of the cancer, Bob should go to the Huntsman Cancer Center so that the doctors can better monitor the cancer and see if it has spread to nearby lymph nodes.

She also explained that there are studies to suggest that there are linkages between familial melanoma and pancreatic cancer. Bob called me Monday morning after meeting with his doctor to recommend that I, like him, get tested for signs of pancreatic cancer--which does not show symptoms until it is usually too late, but if caught early through testing is treatable.

I will soon be seeing the doctor for such a test. In the meantime, it is comforting to know the moms (and dads) (and other loved ones) have prayer lists and that prayers, no matter what the placement on the list, are heard and answered.