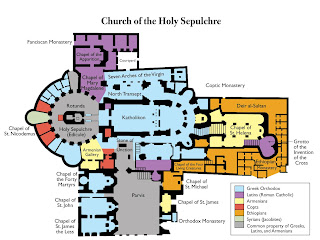 This is a map I have used in two publications dealing with territorial control of the Church of the Holy Sepulcher. 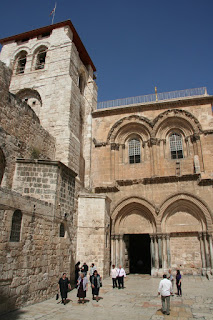 Our Sunday outing this week was to the Christian Quarter of the Old City. We drove to a brand new upscale shopping center (outdoor mall) just west of Jaffa Gate and took advantage of three free hours of parking. We took the grand tour of the Church of the Holy Sepulcher--the site where most of Christendom believes Jesus was crucified and resurrected. In Arabic the church is known as the Church of the Resurrection which is in keeping with the LDS view of focusing on the resurrection rather than the cross and tomb of death. 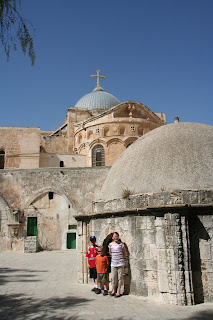 Our first stop was to visit the rooftop Ethiopian monastery. The kids are standing in front of the dome of the Armenian chapel of St. Helen. The monastery is inhabited by Ethiopian Christians but it is also claimed by Coptic Christians. Control of all parts of the church have long been disputed to the point that in 1860 the Ottoman Sultan declared that from henceforth the "status quo" would remain and there would be no changes in who controls what parts of the church. 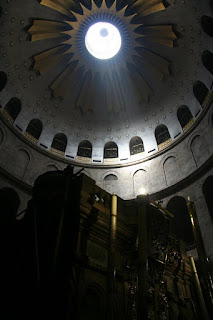 Parts of the church are controlled by one of six different sects. The rotunda and tomb are jointly controlled by the big three: Greek Orthodox, Roman Catholic and Armenian. It took years for these three to agree on the design and who would pay for the remodeling of the leaky dome. 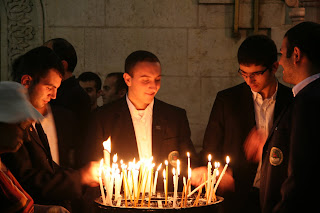 Armenian services had just ended in an upstairs Armenian Chapel. 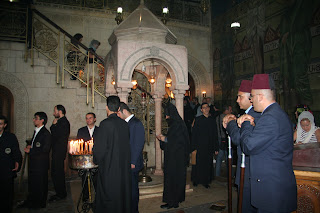 Armenian priests and parishioners after services. We also peeked in at a Syrian Orthodox service in a tiny chapel on the south side of the Rotunda. Joel was impressed with the brightly colored priest robes. 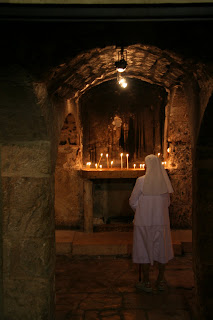 A catholic nun in one of the many side chapels. 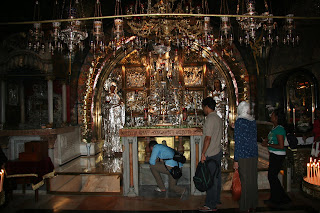 Pilgrims bending to kiss the stone of Calvary. This is the Greek Orthodox side of Calvary--to the right is the Roman Catholic side. The geographical divisions in the church is fascinating stuff. 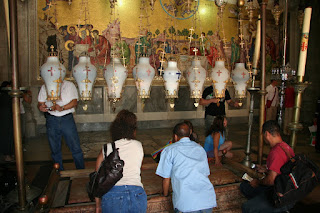 Pilgrims bending to kiss the stone of unction where it is believed Jesus was laid after being taken down from the cross. The Church of the Holy Sepulcher and the Garden Tomb both fit the New Testament narrative and both could be the site. Tradition rests on the side of the Holy Sepulcher, but for most Protestants and Mormons who are not so keen on the icons, incense, and lanterns, the Garden Tomb is much more preferable. 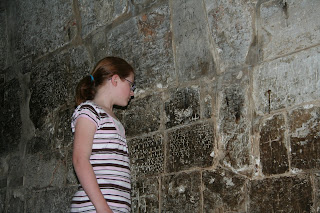 Sarah checking out the many crosses carved by medieval pilgrims along the stairwell leading down to the Armenian Chapel and the Catholic Chapel of the Cross (where Helena supposedly found a remnant of the cross). 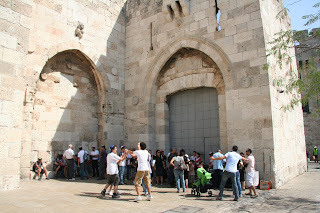 We then did some souvenir shopping with all three kids getting t-shirts. Today was the second day of Succot (Feast of Tabernacles). Succot is a festive holiday and since most Jews have the week off, the old city was packed with religious and secular Jews. To make sure that an already tense situation gets no worse, Israel has limited Muslim access to the Haram al-Sharif (which then adds to the tension). To monitor entry into the Old City, the gated portion of Jaffa gate was closed which allowed for some Jewish street dancing. 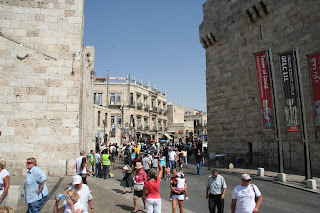 The more open part of the gate (thanks to general Allenby who opened it up following WWI) was barricaded with police monitoring who entered. 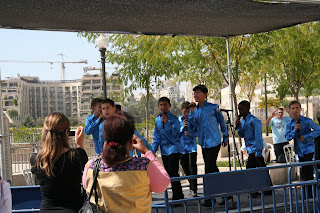 Outside the gate some Israeli boys were singing songs for passers-by. 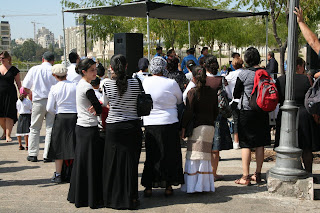 It reminded me of Christmas performances by school groups at the Mall. 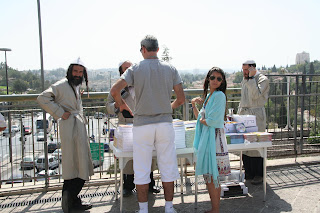 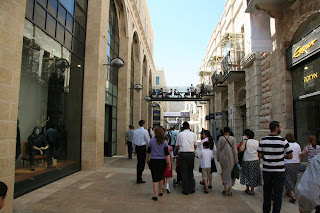 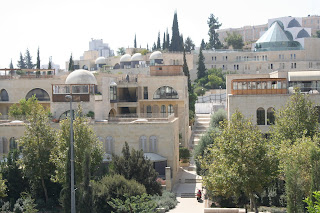 High end residences near the mall and Jaffa Gate. Notice the succots (wooden huts) on the balconies. 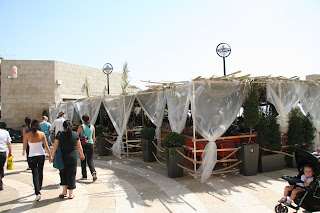 One street-side cafe turned the whole place into a large succot (build in commemoration of the booths or succots used during the forty year wandering in the wilderness). 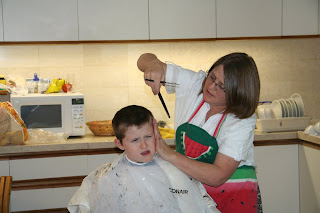 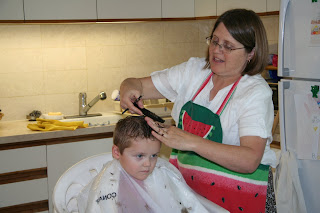 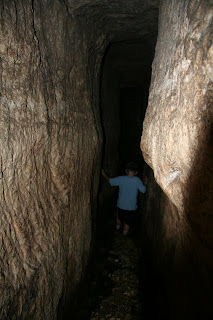 Today, since the kids are out of school for the week, we all joined in on one of the student field trips to the City of David and Hezekiah's Tunnel. With all of the security checks getting into the city, traffic was very backed up so we skipped the scheduled van ride and walked. Will and I led the way through the tunnel. 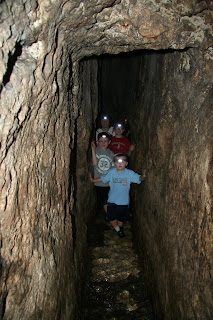 The water was about six inches deep except for the entry and exit where it was up to the top of Will's shorts. 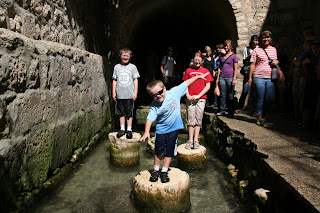 Enjoying the Pool of Siloam at the exit. This is actually the Byzantine pool so from here we went to visit the Roman era pool of Siloam that has only recently been unearthed through excavations. We then walked along the east walls of the city to Gethsemane to vans that took us back to the center.
Posted by chad at 12:45 PM