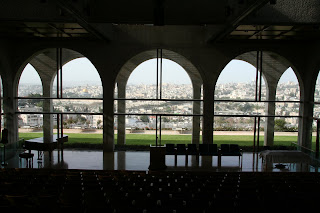 Today was the Jerusalem Branch Primary program. All fifteen children in the primary participated. All but six of the children have parents who work in the US consulate. The theme was eternal families. The children all sat up front in two rows of chairs between the piano and the podium. They sat up front from the very beginning of the meeting. Will started out entertaining the congregation from the very start as he leafed through his pocket hymn book trying to find the right hymn number. We usually direct him to the right hymn and then he sings along the best he can (he can't read but he sure likes to pretend he can). 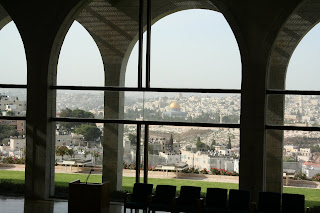 During the first ten years of the center, the curtains were drawn across the windows after the sacrament so that people would listen to the speakers and not get diverted by the wonderful view of Jerusalem. Tonight in a fireside with Elder Holland he joked that if the talks back then deteriorated then they would open up the curtain again to make the meeting more meaningful. 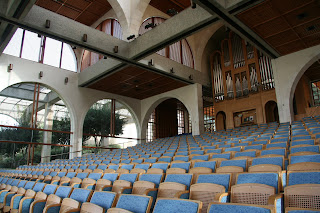 The auditorium/chapel was nearly full with branch members and visitors. 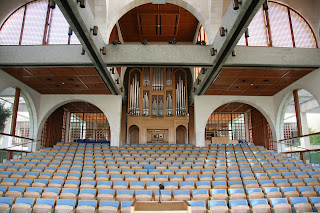 Will was one of the first and the second to the youngest to stand at the podium. He did his grandmothers proud with a memorized talk that was spoken loud and clear. We had told the member of the primary presidency that he knew his part and that he could do it without help. Two others before him had been helped so Will naturally turned to the counselor for help, but she said "you can do it" and he did. Here is what he said without a stumble or stutter:

I am a spirit child of Heavenly Father. I lived with Him before I came to earth. I love Him and He loves me.


There were audible sighs of approval as he finished.

Joel and Sarah both helped write their talks during family home evening. They both read their talks slowly and loudly. Here is what Joel said:

Beside being baptized, another way we can follow Heavenly Father’s commandments and be together forever as a family, is to attend the temple. The temple is the house of God here on earth.

I’m grateful that my parents and my grandparents were all sealed in the temple. I want to be attend the temple too someday so that our whole family can be blessed and be together forever.

During the past year, I’ve had some good experiences at three different temples.

First of all, our primary had an activity day at the Provo Temple. We got to walk around and visit the temple grounds and while we were there, some adults from our ward talked to us about their experiences at temples. One man told us about how he had worked on repairs at the outside of the Salt Lake Temple. He even had a picture of himself on one of the spires. A couple told us about their family’s sealing. It was a beautiful and peaceful place.

Earlier this year, I got to go to the Draper Temple Open House. There’s a mural in an ordinance room which showed a mountain scene that is really beautiful. It almost felt like we were really outside. I also liked the mirrors in the sealing room that reflected each other and looked like things were going back forever. Our family tried to see ourselves in the mirror. Then a few weeks later I got to go to the dedication at our Stake Center in Springville. To go, I had to get a recommend from the Bishop, my Dad, [a few chuckles] that said I was worthy to go. We all had to take white handkerchiefs to wave after the temple was dedicated. What I remember most is singing The Spirit of God. It was loud and powerful.

Just before we moved to Jerusalem, our family went to the Oquirreh Mountain Temple Open House. It was different from the Draper Temple but I really liked the artwork and the big chandeliers. Both temples felt very reverent and peaceful and I felt good there. Plus I liked the cookies that we got at the end [more chukles from the congregation].

I’m grateful that the gospel was restored and that we can have temples on the earth again and I think it’s pretty exciting that I’ve already gotten to visit two of them. I know that our family is blessed because of my parents’ and grandparents’ temple attendance. I hope that someday I will be able to go to the temple too, maybe even one of the ones I got to visit this year. I would like to follow in my family’s footsteps.

Sarah and Joel knew every word to every song. Joel stood casually with his hands in his pockets for most of the songs. The three oldest kids, Sarah, Sarita and Tony all have good voices and they sang out which helped carry the younger kids along. It was as good of a primary choir as I have ever heard. Will sang with gusto on the songs and verses he knew (he knows all of I love to see the Temple).

Usually during sacrament meeting, Will gets a snack after the sacrament and he then plays with legos or draws. It was quite a change to be up on the stand for the whole meeting. He was reverent in terms of not talking, but he certainly did not sit still. He tried to give a "High Five" to one of his favorite BYU students as he passed the sacrament, he knocked on his forehead to help remember words to songs and to sing better, he put his fingers in his ears, he pulled opposite eyelids up and down, he poked Sarah Lewis to his right, he swung his arms to the beat in "Follow the Prophet" etc, etc. For one of the songs he stood with one leg hooked on his chair. When Marie mouthed from the fourth row for him to put his leg down he mouthed back "my leg hurts." Another time when Marie tried to tell him to sit quietly he looked back at her with his arms outstretched and then mouthed the words "what?" because in his mind he wasn't doing anything wrong. I finally whispered to Marie to just ignore him because everyone wasn't looking at him or noticing his antics. (for example one mother was focused on her young daughter who wasn't sitting very lady like). She may have been one of only a few who were not watching Will. Throughout the day we had dozens of branch members come up to us to tell us how cute Will was and that they watched him throughout the entire program and that he kept them entertained (not what Marie wanted to hear).

In spite of Will's antics, it was a powerful, spiritual program. At the end of the meeting an emotional Branch President expressed gratitude that he still feels and is still moved by children singing and testifying. Then a member of the district presidency commented on how entertained he was by watching all of the parents watch their children, especially those who were trying to encourage proper behavior from afar.

To make a great day even better, we had a district conference at 5:00 pm with Elder Holland. During the meeting the sun set and the lights of Jerusalem came on. Spectacular. Just a few thoughts from his talk. He noted the wonderful opportunity the students have to study in the Holy Land and then he told them that if they go home and return to being the same they were before they came then he would be very disappointed. The main focus of his sermon was on the visit of Jesus to the Nephites. He reviewed all that Christ said and did in just one day noting that this is probably the best record of a day in the life of Jesus that we have in scripture. He also taught that as Latter-day Saints we believe that Jehovah (Jesus) in the Old Testament is a God of love and mercy. I enjoyed this comment because that has been something I have tried to emphasize in my Old Testament class. He closed by reading from the Luke account of the sermon on the mount (Luke 6) where we are commanded in verse 36 to "be ye therefore merciful as our Father in Heaven is also merciful". The Matthew account says to "be ye therefore perfect". He said to be perfect means to be merciful. Elder Holland admonished us to be merciful in all of our dealings with family members and others. He closed by saying 'God bless us to live it [the gospel] and love it forever. Afterward we took Sarah, Joel and Will up to shake hands with an apostle of the Lord Jesus Christ. All of our children expressed thanks in their prayers tonight for the opportunity to hear and meet Elder Holland (although Will could not remember his name).

Between meetings we had five single adults from the branch come for dinner-- it was an international groups--Palestinian Arab, Israeli Armenian, American, Colombian/Arizonan and Filipino. 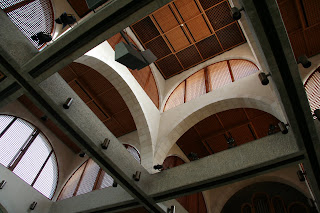 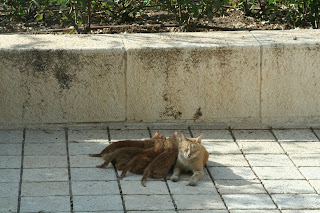 On a side note, there are quite a few stray cats that make the grounds of the center their home. This mother chose to give her four kittens an afternoon snack on our patio. Sarah and Joel have given names to all of the cats. This mom is named Sasha--others are named Dots, Tights, Witch, Sandy and Calico. We are told that most of the cats have fleas so we enjoy them from afar.